Sue Durrell heads for Montana in search of cutthroat trout and more!

I wonder just how many anglers have been inspired by the movie A River Runs Through It to jump on a plane and head off to Missoula, Montana to fish the Blackfoot River. It was 1992 when we watched Reverend Maclean and his sons casting on the most beautiful river setting imaginable.

Unlike Scotland, where we usually fished, the weather was glorious and when a cheeky young Brad Pitt was carried down the river after his monster fish (with his cigarettes in his hat) you could tell it was a whole lot warmer than Scotland. 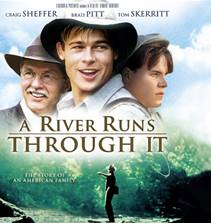 The film, which was directed by Robert Redford, was stunning in its cinematography – capturing the casting and the light on the water beautifully.  It must have been a better advert for Montana than any tourism brochure. We promised ourselves that one day we too would get to fish on the Blackfoot.

So many years later, with our children having flown the nest, I started looking into float trips and came across John Herzer of Blackfoot River Outfitters. I think I contacted three or four outfitters, but John was quick to respond and really helpful despite our endless questions.

As the pound had plummeted against the dollar after the Brexit vote, I confess to a mild gulp when we learned the cost of their ‘top-of-the-range’ float trip - one involving a second raft carrying the full Monty of camping gear, with an advance team to set up camp complete with sun showers. Having explained that we were happy to do without any luxuries for one night, we struck a deal. John’s wife Terri was brilliantly helpful in terms of advising us regarding licences and a packing list.

We arrived in Missoula, where we stayed at the Gibson Mansion – where you get the most amazing freshly baked huckleberry scones with your morning tea tray. The breakfast was also a gourmet delight of a gruyere omelette with asparagus – definitely worth a trip for any foodies.

John Herzer collected us, and had a good laugh at our hire car (a conspicuous bright red cabriolet – in a state where everyone drives trucks!). After a quick stop at his shop, we headed off on the MT 200 towards Lincoln. Passing the Lolo National Forest, the Clearwater Wildlife Management Area and luxury resort ‘Paws Up’, we left the main road at a quaint and picturesque village called Ovando. 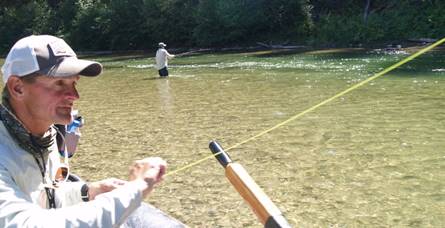 Our starting point was the Harry Morgan ‘put in’ on the North Fork of the Blackfoot River, one of the important spawning grounds for bull trout and the native westslope cutthroat trout. This was a fairly narrow but pretty stretch down to the junction with the main river, and Andy was successful in catching a couple of rainbows on spruce moth.

From the junction we headed down towards the Box Canyon and I caught a small 6” ‘cuttie’ on a Noble Chernoble, and then an 18 ½” cutbow (a cross between the cutthroat and the rainbow) on a Purple Montana Prince nymph – this turned out to be the biggest fish of the trip.  (Fish are measured by length in Montana, rather than weight as we were used to). 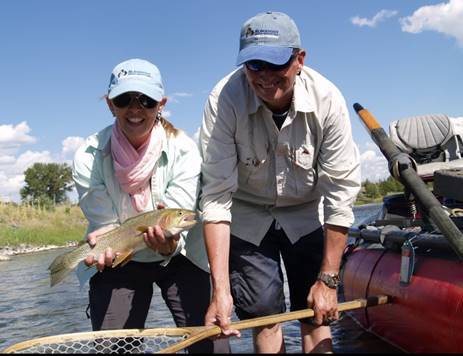 The fishing on the Blackfoot is all public, and access is permitted anywhere along the river within the high water marks, so it is not necessary to find a designated campsite. We pitched camp just before the Box Canyon on the Blackfoot, and John demonstrated his culinary skills with pork steaks followed by strawberries and cream. We made a mental note of the locations of several flippity-flops in the water, which we took advantage of later I the evening and the following morning as John reloaded his custom designed Blackfoot Strike raft. 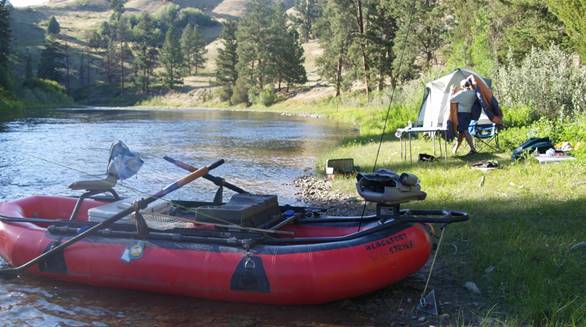 The Box Canyon was plentiful with fish, but horribly frustrating. We both had numerous strikes on our spruce moths, but not a single haul. I did have a big fish on the line for some time, but got so excited that I started winding my wheel the wrong way and got in a right mess - my quarry had a good laugh as he swam off and escaped.

Coming out of the canyon we saw osprey and a young bald eagle, each perched on an ideal look-out to survey the river.

Andy caught three more rainbow that morning, and I caught an 8” mountain white before we stopped for lunch. As John scouted a level place in the shade to erect the picnic table, he stumbled upon a young dear dozing in the grass by the river. The dear rose nonchalantly and wandered off.

Having enjoyed a relaxed lunch, we were just about to set off when another raft came around the bend – this was only the sixth raft that we had seen in two days. Commenting that we had seen two rafts very early in the day – the guide explained that a Hoot Owl restriction had started that morning.

A Hoot Owl restriction is imposed by the local Wildlife and Parks department to protect the fish when the river temperature gets too warm and fishing is prohibited between 2pm and midnight. This explained why some boats had been setting out so early to make the most of the morning fishing before stopping up for a late lunch.

It was gone 2.30pm when we rose from our lunch, so we had no option but to enjoy the ride for another four miles back to the Russell Gates memorial camp ground, where John had arranged for his car to be delivered. We put the world to rights, speculating on the implications of Britain leaving the EU, chewing over the gun laws and comparing the political shenanigans in the UK and the USA.

The splendour of the scenery was incomparable, and the quality of the fishing was so enjoyable given that it was late in the season. John was a brilliant guide and we would recommend him without hesitation.

The Blackfoot River is truly special, and I am already dreaming of when we might return.