My rod of choice for my home stream is a 9ft 4wt. It is just the right length for the low canopy, is long enough to keep line off of the water for longer drag-free drifts and the 4wt means I can attach some relatively heavy metal under a dry should I need to. My other main rod is a 9ft 2wt and some of the time this is where this rod runs a little short, it struggles to cast a heavier nymph. 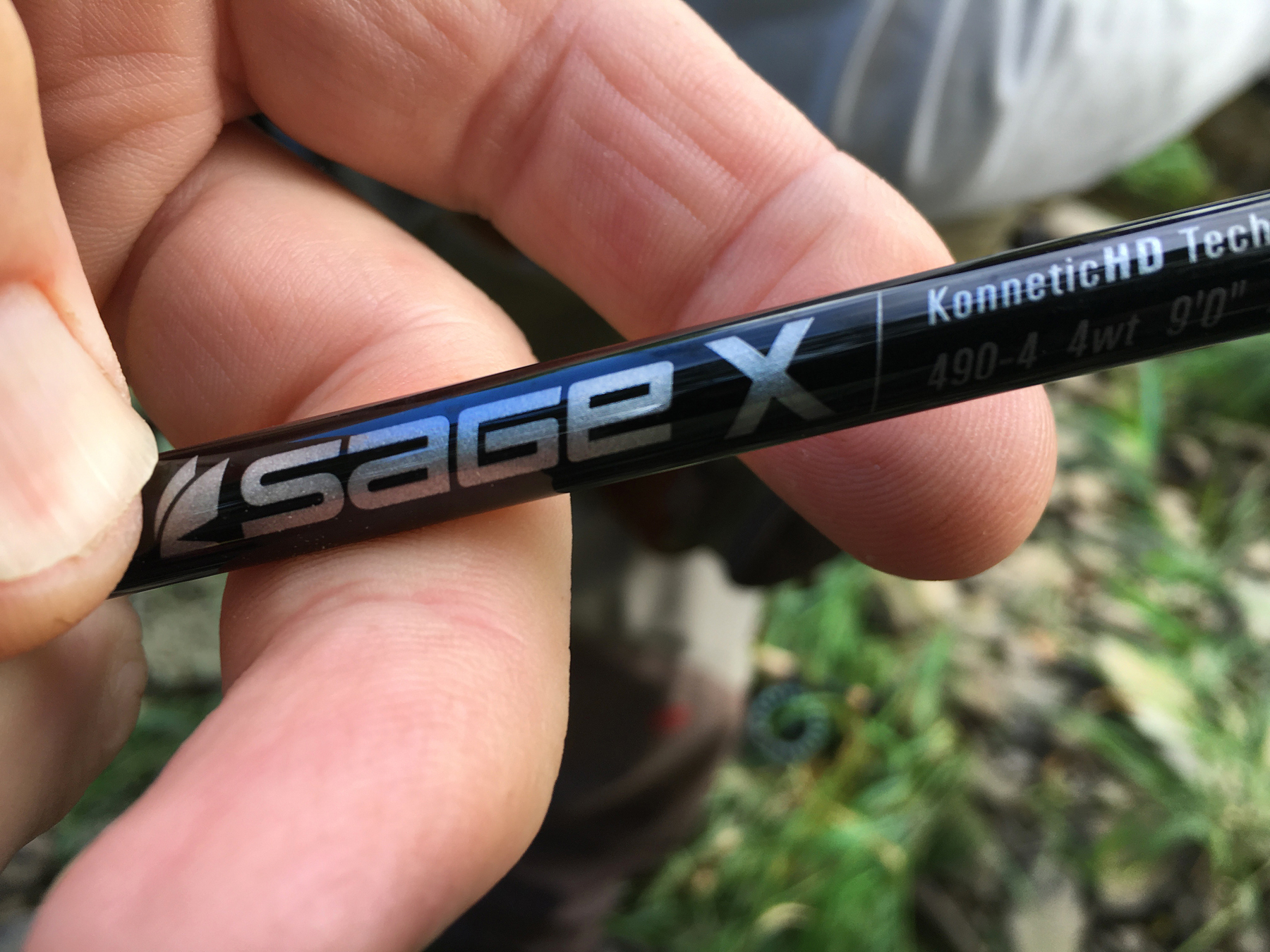 At danger of going off topic a little it is worth mentioning that a rod is rated not by its ability to play fish but the line it is able to cast (something that is also subjective). A 2wt fly line is lighter than a 4wt line and the lighter line with less mass struggles to carry a heavier fly to its destination.

Anyway getting back on topic, I felt I needed a new 9ft 4wt and settled on the new Sage X rod.

I can start by comparing the new model X to the old model One. The X is slightly lighter in comparison to its predecessor at 2 7/16oz. I was lucky enough to cast them side by side recently and the weight difference was really noticeable.

The other big difference was action. The X feels a softer rod to cast. I don’t mean super soft, just a little softer than the One but with really fast recovery. The lightness comes from the new improved Konnetic HD that gives a higher density fiber composite.

The blank is a pleasing dark green described as black spruce by Sage.

I am not sure what line was used when I cast them side by side but when mine arrived I made a few test casts with the RIO Gold on it and liked it at both short and longer distances. The rod felt good and stable. 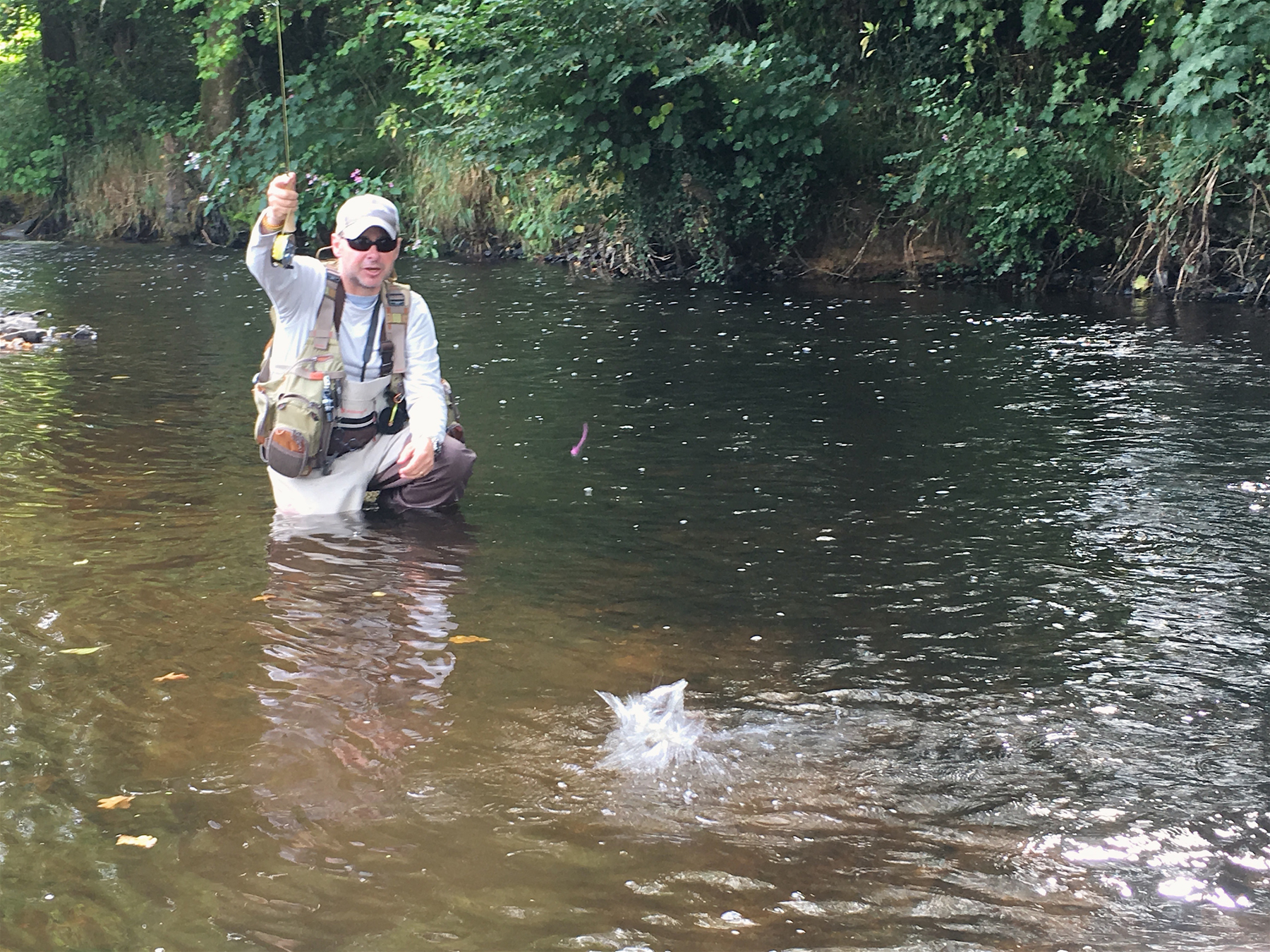 I met up with my pal Perry recently and we thought we should spend the day putting the rod through its paces in a real fishing situation on the river.

We both like to fish a dry and Perry was first up and despite him covering a riffle with a “bring 'em up” dry it was early autumn and the fish were having none of it and so we tied a nymph under the dry and a couple of casts later a fish was on.

Now, none of this is down to the rod but it was interesting to see how Perry cast the rod with just a dry and then with a nymph too and it coped really well. The nymph was only 2.5mm but it was a good start.

Just a short distance upstream we sat on a rising fish that took four fly changes to catch. We were back on the dry and Perry was back at the helm. The thing I noticed was Perry was barely false casting. Most casts were just the pick up and lay back down with a good shoot of line. I found I was doing the same too. We called it “point and shoot”. The rod and line worked really well together and the lack of false casting over rising fish is an advantage right? 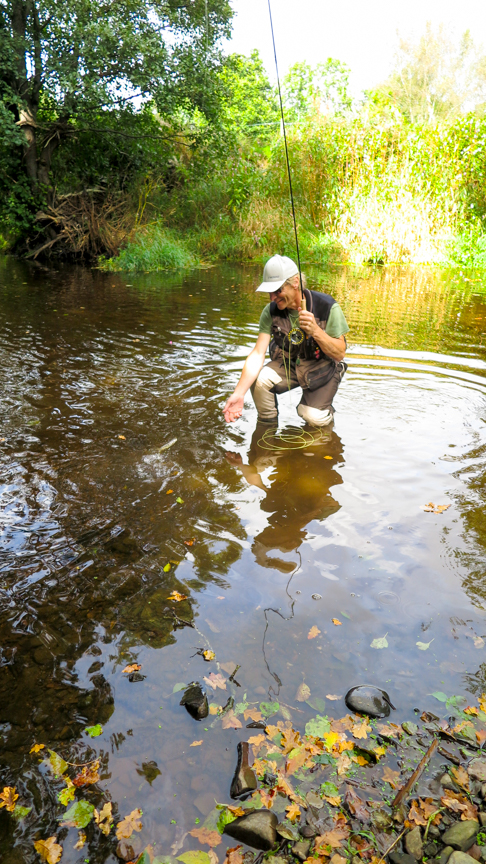 Perry mentioned the quality of the cork, something that I know is close to a lot of anglers' hearts and on a premium end rod it should be perfect. This is and I know Sage have worked hard on ensuring the quality is only the very best. The handle is a little slimmer than usual Sage rods. Historically, in my eyes, Sage have always veered more towards larger handles but these are smaller and suit me well.

On the reel band there is a nice little touch, the line weight of the rod is etched on it.

We shared the rod taking it in turns catching a fish then passing the rod over or if the fishing was a little slower handing over the rod anyway. That is an important trait with a fishing buddy, knowing when enough is enough.

Perry sent me an email after the day as I asked him to write down what he thought of it. He was equally as impressed as me. The words “joy to use” and “smile on my face” were in it but the most interesting quote was that he said that after half a dozen casts it felt like a rod he’d owned a long time.

To me, this is says a lot about how Sage have got this right with the rod. It doesn’t take a lot of getting used to, it’s user friendly.

Let’s not forget that we are looking at the top end of the market here and so everything should be spot on. 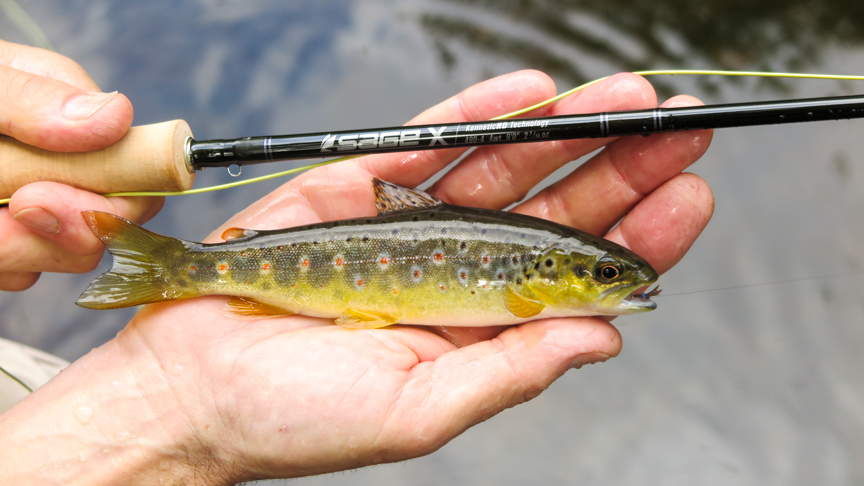 Negatives? Well we couldn’t find any except Perry, a long time Sage user, wondered why Sage don’t use dots on the blank but that was it.

The rod really is a good one and you might think I was sent it to review but I wasn’t. I bought it. I don’t have many vices but good fishing tackle is one I do have and as someone who spends most of their life standing next to someone fishing on a river or fishing myself I want something that does the job well in a variety of situations. I’m a happy angler and pleased with my purchase.

The X range of rods starts with a 7 1/2ft 3wt all the way up to a 9ft 10wt with plenty inbetween. There are also double handers in the range too.