This fly was designed to do some heavy lifting; holding up a tungsten bead nymph in deep fast water while remaining easily visible and also taking the odd fish. Suspending a heavy nymph requires a decent amount of buoyancy, which in a relatively small fly generally means using some foam. My usual approach was to use a foam beetle such as my Popeye pattern (ESF #44) until one day I was watching some sedges scuttling over the water and it occurred to me that there could be an alternative solution. The SBS uses a slice of foam cylinder covered in organza trimmed to a wedge shape that approximates the profile of a sedge. Tied on a jig hook for optimum connection in a duo rig (Dancing a Jig; ESF #53) the fly’s internal buoyancy provides sufficient cargo carrying capacity to support and drift a heavily weighted nymph all day without getting soggy and sinking.

The SBS can be tied using a single colour of organza ribbon but looks better using different mixes of tones as required to imitate the sedges on your waters. The antennae or horns are an optional extra, but are easy enough to make after a couple of practice runs. Any colour of foam cylinder or booby eyes can be used for the hidden underbody, though you might want to use a permanent marker pen to tone down brighter white or yellow foams. Since the foam is doing most of the work in carrying the weight of the suspended nymph it’s a good idea to tie a few variants with different sizes and lengths of foam to match different weights of nymphs.

Once the varnish is dry treat the whole fly with a water repellent and allow to dry. I find that the Nikwax TX Direct spray which I use for replenishing the DWR coatings on my wading jacket and waders works well on the nylon fibres of organza ribbon. 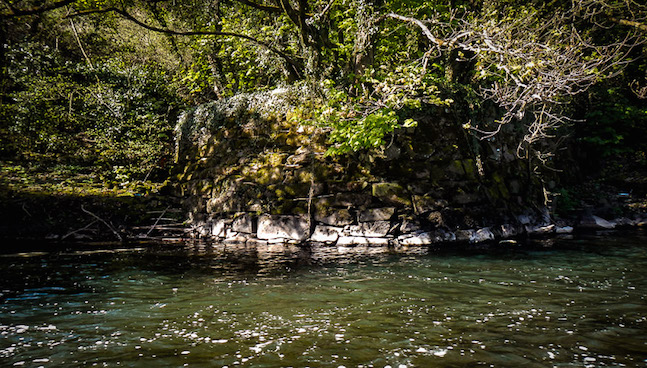 An SBS and weighted nymph duo is ideal for fishing deep water with variable currents such as this pool on the Taff. Fast shallow water enters the pool funnelled by some large rocks and then drops into a long deep glide bounded by slower water with a back eddy on the far side against an old bridge buttress. The pool usually holds some nice trout and grayling, but can be a tricky place to achieve a decent presentation due to the complex nature of the water flow. Using an SBS and a tungsten bead nymph on a long length of tippet from a furled leader I can lob the duo into the fast water upstream and then guide the pair through the flow into the deeper water with most of the fly line held up off the water. This allows me to fish the nymph close to the bottom down along the edges of the main flow or fish the deep water in the back eddies where the fish hold out of the current, without the fly line dragging the flies off downstream. This approach has caught me some nice fish under difficult conditions.

To fish the SBS to its full advantage use a fairly heavy nymph tied to the jig eye on a length of tippet appropriate to the depth of water you are fishing. Degrease the last foot of tippet from your leader and the length to the nymph to ensure it sinks quickly, and then smear the organza fibres on the sides and top of the SBS wing lightly with Gink. Since the fly floats fairly high in the water you can give it the occasional pull or twitch by raising the rod tip to make it skate across the surface like a real skittering sedge, this will cause the heavy nymph to rise and fall in the current and the movement of both flies will add additional attraction to the fish.