It’s early May on a famous Scottish trout river, I have managed to get myself on one of the best beats with some great company.

Unfortunately the weather has decided I need a challenge and it is glorious sunshine, not a cloud in the sky and blowing a 30 knot, north easterly, the wind chill makes it feel cold.

So, the challenge is set.

The morning was spent searching out the beat to find some likely looking spots and trying to pick off the occasional rising trout, there is still a trickle of large dark olives coming off with the odd March brown. A size 14 dark olive dry imitation accounted for a couple of small fish, but I’m here to hunt the resident big browns. 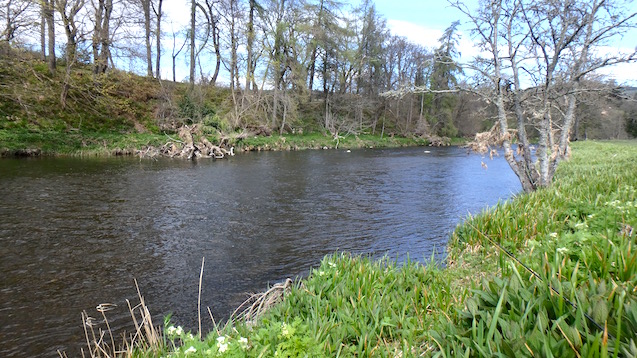 As it approaches lunchtime, I see a rise near the far bank in a very likely looking spot, the water flattens as the ripples bubble off the fish’s nose, like a mini Jacuzzi, this is the fish I’m after. I take my seat and watch for a good 20 minutes, the lazy routine of a good sized fish has him only coming up every now and then, I cannot see his prey but there are olives drifting down the run.

So I try him with the olive dun and despite some surprisingly drag-free drifts, nothing. He has gone quiet now so I settle into a sandwich, after 30 minutes or so he is back to his routine,  time to concentrate on the water to try and figure this one out.

Grannom are starting to hatch in the midday sun, not huge swarms, but enough. Maybe he is intercepting the rising pupa, So I get back into position and try a hatching grannom, then a CDC and elk and then back to the olive dun. All has gone quiet again. 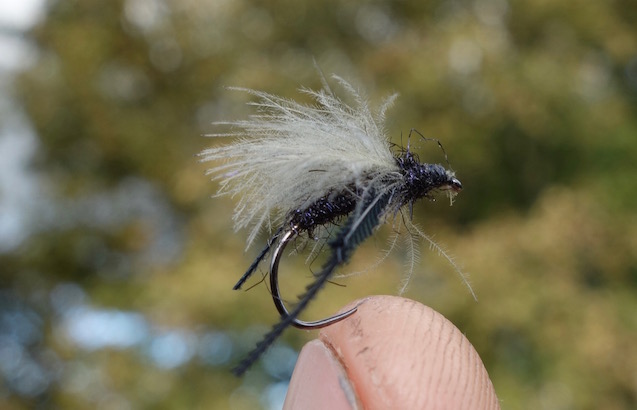 An hour passes before he starts to poke his nose up again, I had started to wonder if I had spooked him for good. In the passing hour I had been moving about and trying to find out what insects were on the water. I found lots of olive shucks, march brown shucks, small black midge shucks and of course I was watching the grannom and olive duns anyway, there was also plenty sticky leaf shucks and in amongst them some small black flies and a few spiders, so in the wind, there was food falling from the trees as well.

Perhaps it was the midge pupa he was intercepting, but then I might have expected a more constant rise and perhaps for him to move about the pool a bit more to find them, and that wasn’t happening. Could it be the bugs out of the tree? Hmmmmmmm. I attach one of Mr Procter's favourites, a size 18 all-purpose terrestrial, to cover both bases and let drift it over his nose. At last, some interest, he comes up and looks and at the last minute, ignores the fly.

Frustration is setting in, I sit back on the bank and re-group, have a drink of water and a biscuit. I have been finding that eating biscuits is a good way to find rising fish, fortunately the walk to and from the river is enough to counteract  any body altering side-effects they may have.

During my moments of quiet contemplation, I reflect on a conversation I had with a good friend and top grade trout hunter a couple of weeks previously, when he had remarked on the absence of a hawthorn imitation in my fly box. I had resolved this problem, that very evening when I added three freshly tied simple hawthorns to the box just in case. 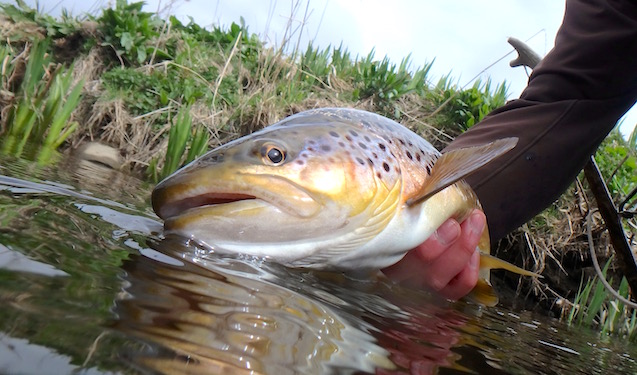 Perhaps this was that moment to which he had eluded?

Beside my bed is an excellent  book called, funnily enough, ‘Trout Hunter’ by Rene Harrop. I have been working my way through it very slowly as I want to digest as much info from it as possible, my local river may not be the Henry’s Fork but I fancy it might give it a run for its money. The most recent paragraph I had read, was Rene’s reflection on a selective feeder that ignored everything he put at it, until he threw a large grasshopper pattern in its direction, this was engulfed first time and had lead Rene to establish that sometimes a large terrestrial will often inspire a random take from a fish, that may be feeding on almost anything else.

Only one thing left to do then. I attached a size 12 Hawthorn, despite the fact I had not seen any at all. It may have been three hours since I first spotted the fish and despite putting him down three times he has not moved very far. I carefully get back into position and make the cast.

No hesitation, what turns out to be the seasons best, fooled, with a little help from my friends.