Paul Procter is one of the most well known fly anglers in the UK. Aside from being extremely modest he is an outstanding angler, fly tyer, writer, fly caster and all round good guy. Pete Tyjas got the chance to catch up with him and ask a few questions 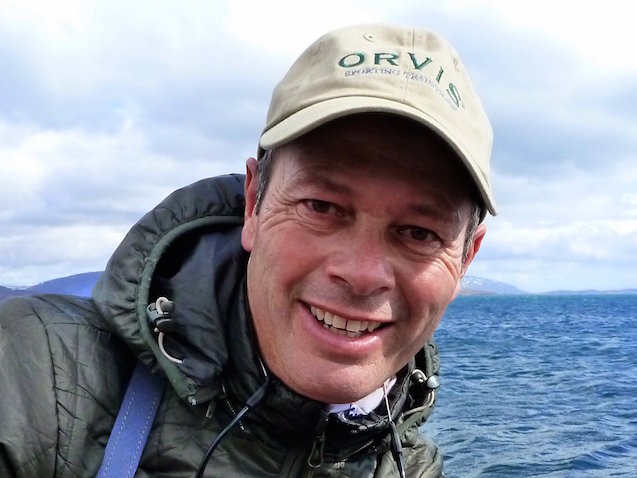 Paul, has it always been fly fishing or did you come into the sport via a different route?

As a schoolboy coarse fishing came first though fly fishing always intrigued me, even from an early age.  However, with no fishing influence in my family, I eventually persuaded my parents to buy me a fly fishing outfit for my fourteenth birthday.

What is it about fly fishing that you love so much, is there one single thing or a multitude of reasons?

Crikey…there’s countless reasons though the overriding factor has to be that of fooling a wild creature on a mere wisp of fur and feather and then being connected to it through nothing more than a length of fly line. Of course, fly hatches and the other bugs that fish eat have become a huge fascination for me.  There’s also the locations that fly fishing takes you to, often they’re remote, untouched corners of the globe where few folk care to tread.

Did you start tying flies soon into your fishing career or was it a natural progression that happened over time?

Within six months of receiving my first fly rod I’d become obsessed with the trout’s diet and consequent imitations. Much of what I was observing didn’t seem to exist in the rows of artificial flies in local tackle shops, so I set to, initially tying without a vice and using domestic cotton that was spilt to be rendered slimmer. Materials came from my shooting and ferreting background.

I know you keep meticulous records of your fishing days. Do you refer to these often, on a look back over the year basis or just enjoy keeping them?

I’m always revisiting my diary to call on past experiences and conditions.

What would you recommend a would-be fishing journal keeper to include in their records?

Important information for me includes air/water temperature relationship, river levels, cloud cover and wind strengths/direction. Fly hatches feature heavily too and of course any unusual events during an outing. I tend not to count or record fish numbers though do include the weight of any fish over 2lb along with their length.

Recording events like this emerging large dark has been an eye opener to Paul, making a camera an important part of his equipment when it comes to copying naturals. 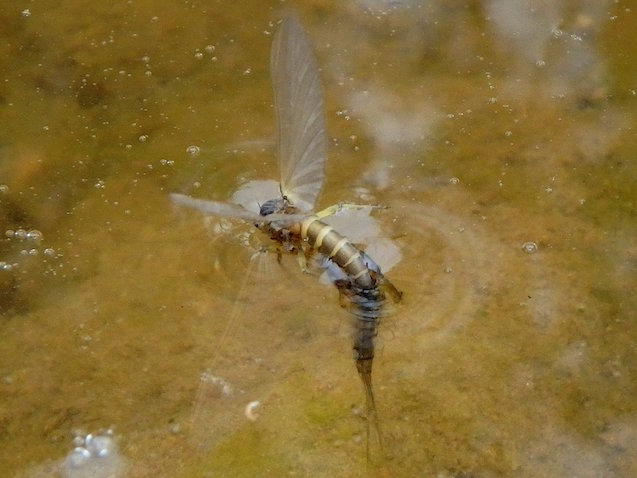 You’re equally at home on rivers and stillwaters but which do you prefer?

I cut my teeth on wee becks close to home before the pull of large stocked trout lured me to stillwaters.  These days I’m happiest on rivers as everything seems more intimate in my eyes. That said, fishing lakes or large reservoirs demands a lot of skill to constantly find fish, which draws me back frequently.

Since you have been fly fishing is there a product or material that has been released that you would describe as life changing to your fishing?

A toughie this one. If I had three bites of the cherry then first up would be Cul de Canard, which although not new changed my whole outlook on dry flies since becoming aware of its importance many years ago in Slovenia. With regards to tackle, copolymer monofilament has been a massive boon, especially when presenting small, delicate dry flies. And finally, a bit of a quirky one, but a pocket camera has altered my outlook as this often captures things/events, which might otherwise have gone unnoticed. This is most apparent when photographing insects and has proved invaluable when it comes to fly design.

We are spoilt with a multitude of good fishing rods now but how much emphasis would you put on fly line selection?

A fair bit to be honest, in fact I can be paranoid about fly lines to the point of taking a micrometer to them and checking various tapers. Something else I’m big on is selecting specific lines for certain conditions. For example, in spring when it’s chilly, I’ll opt for a fly line with supple characteristics as the cold air can make already stiff lines feel wiry. Conversely, in more breezy conditions a stiffer line will be my choice as it copes far better with headwinds.

You’re known to wait out a fish, watch it, select the correct fly you believe it to be feeding on and more often than not catch it! Do you target a specific fish and ignore others that might be feeding and if so is it hard to do?

As you’re aware Pete, I’ve become consumed by huge wild brown trout. Pursuing them means making sacrifices and often I’ll pass up decent trout in search of larger fish. This can bite you on the backside as more than once I’ve walked past reasonable trout to find nothing larger feeding, only to end my day not even making a cast. Case in point, a good friend and I once made a round trip topping 700 miles with two nights away and we never unlatched a fly from the keeper ring. Being romantic that’s true grit and commitment though the realist in me says “what a pair of bloody clowns”! Whilst I thrive off this, it can be soul destroying and something I’d be reluctant to recommend.

Sitting out trout in spring is not only risky, but can be chilly too. Paul waits on a notable fish, praying for it to show up when the hatch begins. 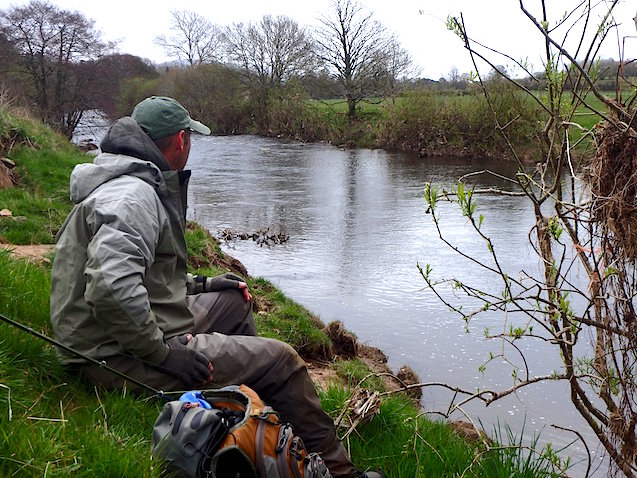 Is this why you enjoy fishing in New Zealand so much?

Partly yes, however, one huge attraction about New Zealand for me is the sense of freedom it offers and the enviable outdoor culture the Kiwis possess.

Do you practice your fly casting?

Absolutely. Be it golf, darts, snooker, or any other hand/eye coordinated sport, practice is vital to stay on top of your game. I generally focus on accuracy, usually from a kneeling position though if you analysis this, it’s perhaps more to do with judging distances than landing a fly on a two pence piece. For me, 10 minutes everyday is far better than an hour once a week, as it maintains muscle memory. This is why I own a Practicaster ( http://www.orvis.co.uk/p/practicaster/4y6a ), which is perfect for use in the garden, or house. Although not strictly a fly rod, it teaches you so much about tracking, accuracy and slack line casts.

Away from the water, Paul uses the handy Practicaster to keep on top of casting. 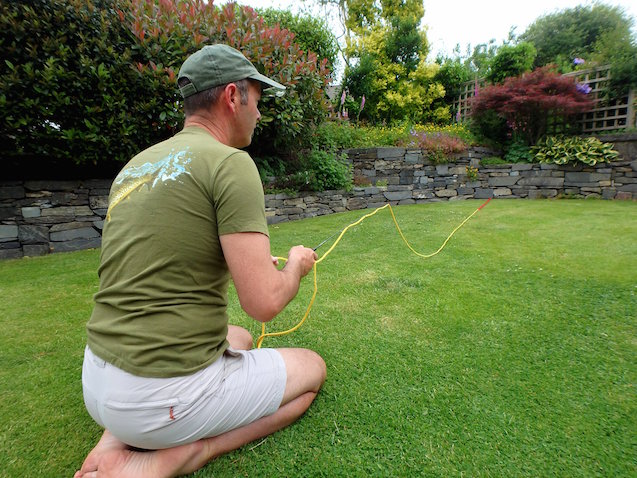 Is it true you crept out for a few hours the day you got married?

Ashamedly…yes and what’s more, I managed to convince my wife-to-be that a 3 o’clock wedding would be a good idea instead of the traditional midday affair.  That way, I could get a decent fix in before jetting off on honeymoon. Furthermore, I only just made to the maternity ward for the birth of our second child Lucy, as I was out fishing when the midwife rang. In my defence, the nurse did say “there’s no need to rush Mr Procter”, which computed to another 30 odd minutes fishing in my mind!

Is there one place, a river you have always wished to fish that still remains on your “to do” list?

Without question it would be some of the more remote Russian rivers inside the Arctic Circle. We’re always hearing people banging on about the “last frontier” and such, but certain parts of Russia must surely rank as a true wilderness.

What piece of advice would you give a fly angler looking to take their game up to the next level?

In a society of quick fixes and instant gratification these days, too many folk simply rush in and start wafting a rod about. Sitting quietly and observing your surroundings for several minutes teaches us so much and often we become aware of fish that we might have otherwise spooked.

Looking at fly fishing as a whole, do you think it is in good shape?

Being a positive sort, I believe our pastime is in good order just now as fly fishing seems to becoming more fashionable, especially with ladies, which is wonderful to see. Naturally, if I had a magic wand, I’d encourage more youngster to take it up instead of them being seduced by devices like phones etc.

One day, one river, where would it be?

The Oreti in New Zealand

Working closely with Orvis UK and Partridge Hooks, Paul documents his fishing, travel and findings on social media often with relevant posts of fly hatches and their imitations.  Find out what he’s up to: