You asked me once, what was in Room 101. I told you that you knew the answer already. Everyone knows it. The thing that is in Room 101 is the worst thing in the world.

I guess everyone has something that they hate or fear that would be in their own personal Room 101. Me? Spiders and hotdogs. The first is totally irrational; I’m fine with any insect, six legs are OK with me, but arachnids, with the just two extra legs, no. The second is entirely rational; a combination of a night ferry back from Norway, a force 8 gale and some truly spectacular high velocity sea-sickness. Aversion therapy is a very powerful thing, believe me and the slightest smell of frankfurter makes me nauseous.

Those are my everyday life candidates for Room 101, but there are others which relate to fishing days. Please bear with me while I have a bit of a rant; I suspect we will have some in common.

Let me start by saying I have nothing against dogs per se, nor indeed against the majority of dog walkers I meet along the bank; most are very considerate. Their canine companions are mostly interested either in where the strange smell of fish is coming from or whether I’m going to throw that nice long stick I’m carrying for them. No, I’m talking about the people that appear to have less intelligence, consideration and common sense than the animals they are supposedly in charge of.

The example above is typical, I was fishing the edge of a seam below one of the bridges on the Taff when this thoughtful lady turned up with her charges and cheerfully released the hounds into the river. She then proceeded to throw a selection of tennis balls, rubber rings and sticks into the water for the nice doggies to fetch. She waved across to me and called out ‘Lovely day isn’t it’. I was speechless. I reeled in, waded out and stomped past her without a word.

While fishing I’ve been hit by sticks thrown over bushes into the water for dogs to chase. I’ve had dogs swim under my rod tip chasing tennis balls floating down in the current. On one occasion I was fishing the calm glide at the tail of a pool which usually holds some nice trout but requires a very stealthy approach to avoid spooking the fish. I’d caught a couple and had just moved a few steps up to target the deeper channel that runs down the centre of the pool when there was a big splash behind me. A large stone had landed in the water and a rather puzzled looking dog was rushing up and down along the edge of the pebble bank behind me. The dog was shortly followed by its owner, who proceeded to throw more stones in at the water’s edge.

The dog was looking rather puzzled at this point, looking at me then looking at her. I could imagine it thinking. Here’s the deal, if we are in the park and you throw something I’ll run and fetch it back if that makes you happy; if we are on the river bank you can throw a ball or a stick, or anything that floats, I’ll maybe swim in and retrieve it; here we are on a beach of identical pebbles, you chuck one in the water, it sinks, what am I supposed to do? The ensuing conversation between me and the dog owner, closely and intently followed by the dog, went like this:

‘Excuse me, could you move down the bank a bit if you’re going to throw stones’

‘Look I’m just trying to fish here, if you want to throw stones for your dog there’s lots of river to do it on’

‘WOULD YOU MIND NOT DOING THAT’

‘Because you’re making a noise and spooking the fish’

‘You’re the one who’s making a noise now’

With that irrefutable statement of logic she turned on her heel and flounced off down the bank calling for the dog to follow. The dog at least had the good grace to look back over its shoulder as if to say ‘Well what can I do?’

Then there is that curious sub-class of dog walker; the pick and flick brigade. These are the nice folks who carry a little container of poop bags attached to their dog lead and do actually use them to pick up after their pooch. However rather than taking said bag home for disposal, or depositing same in the bins provided by the council, they delicately transport the bag dangling from their fingers until they are nearly at their car, and then with a casual flick of the wrist, chuck it off to the side of the path to catch and hang in the trees or bushes.

The unsavoury contents fester and ferment through the heat of summer, the plastic bag degrades in the sunlight and the whole thing becomes a foetid time bomb. Come the autumn and the fall of leaves these little votive offerings are just waiting for an inadvertent stab with your rod tip as you thread through the undergrowth to the bank. It’s not a great way to start your day.

Like dog walkers, not all canoeists should be consigned to Room 101. I’ve met some perfectly amiable and considerate examples of the paddling fraternity. While wading in the middle of the river I’ve had canoeists stop upstream and wave for me to indicate which side of the river I would like them to pass me on. When I’ve signalled back they have drifted quietly past with minimal, if any disturbance to the water, fish or me. When the river is low I’ve even had paddlers beach their craft upstream and walk down to ask whether it would be OK to proceed in the water, or would I prefer them to carry their canoes down the bank past me. 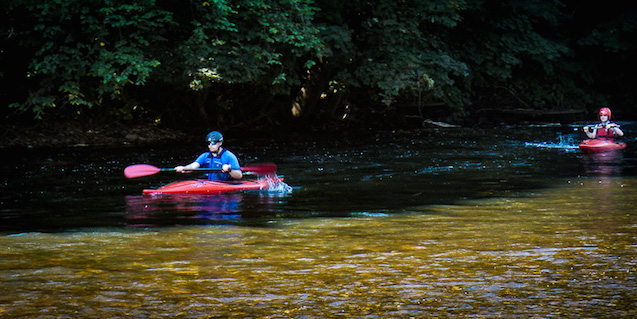 No, the ones I hate are the ones like those above that paddle straight through the run I’m fishing, slapping the water, twisting and turning their canoes and generally scaring off any fish in the vicinity. I’ve even had a canoeist execute a slalom turn directly in front of me only feet from my rod tip, maintain his position by vigorously paddling and enquire ‘Catch much here do you mate?’ My reply included the sentiment that it was unlikely now.

Would these same people stroll in front of a golfer teeing off? Walk across a football goalmouth while a penalty was being taken? I’ve occasionally wondered what a 5mm tungsten bead travelling at speed would do to that nice shiny finish on a canoe.

On several rivers that I fish dense growth of Japanese knotweed and Himalayan balsam severely restrict access for anglers. In many places, such as the one below, only an intimate knowledge of the paths and access points gained by grayling fishing in the winter will allow any hope of fishing the same stretches for trout in the summer. Even with that knowledge getting onto the water with a threaded rod takes much twisting, turning and cursing as tippet and flies catch in the dense vegetation. On a couple of occasions I’ve come across visiting anglers wading up and down a section of river rather bemusedly trying to recognise the hidden gap in the green wall through which they had previously battled to get on the water. 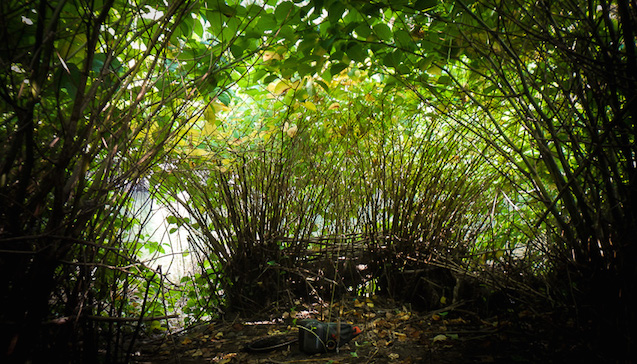 Knotweed and balsam were introduced into the UK by the Victorians and promoted as splendidly vigorous plants suitable for the gardens of the burgeoning middle classes who did not have the wherewithal to afford the orchid houses favoured by the rich. They rapidly escaped and the first examples growing wild in Wales were found in the 1880s. The invader is notoriously hard to eradicate, but controlled release trials of a Japanese aphid which sucks the sap of knotweed began in 2016 at several sites in South Wales; I hope one of these is on the Taff, otherwise I may be buying a machete next summer.

Balsam on its own isn’t quite as bad as knotweed; at least you can stomp your way through it, if only for a short distance. However in many places the two combine together in an evil conspiracy to completely confound any attempts at breaking through. Where balsam grows on its own pulling up the shallow rooted plants and leaving them to dry in the sun may help to control it. However recent studies have shown that in the presence of knotweed this can do more harm than good. Balsam appears to secrete some form of growth inhibitor which prevents other plants growing in the same area; pulling out the balsam just opens up the area for knotweed to move in. So if you are tempted to bash the balsam, check what’s growing nearby.

The deepest darkest corner of my Room 101 is reserved for anglers who have no respect for the environment, nature, or indeed other anglers. These are the ones who leave litter strewn all over the bank, or strangely think it perfectly acceptable to pack up all the rubbish from their supermarket sandwiches, crisps and drink bottles in the bag they paid the supermarket for, tie it up neatly and then leave the bag on the bank. Some of these idiots go further and bring disposable barbecues to while away the hours on the bank with some cooking. Disposable barbecues are meant to be disposed of in a bin, not abandoned balanced on a couple of scorched rocks. Given that there is no shortage of water with which to put out the charcoal after use, why do these people just abandon their barbecues to rust away on the bank? 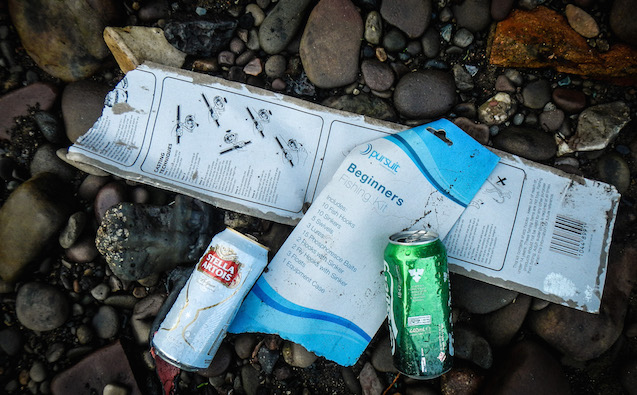 What sort of irresponsible imbecile buys a beginner’s fishing kit, takes everything to the river and then rips off all the packaging and drops it on the bank? Presumably the same sort of moron who, befuddled by a couple of tins of cheap lager, cannot understand the instructions on the back of the packet and completely messes up casting with a fixed spool reel. That’s what I was thinking as my wading boots became completely entangled in the yards and yards of line that this uncaring idiot had strewn up and down the bank. I ended up having to use my line clippers to cut my way out of the tangle and spending half an hour tracking down the rest of the line and winding it up for safe disposal.

I’ll grit my teeth and put up with dumb dog walkers, contrary canoeists, continue to battle with the knotweed and balsam and even smile at some of the urban graffiti I come across, but I just cannot tolerate the thoughtless idiots who strew fishing line up and down the bank. Half of my pleasure in fishing is watching the kingfishers, dippers and other wildlife going about their daily lives. It makes me feel guilty and ashamed that some supposed anglers bring such harm to the environment that they should be respecting and that I might be associated by others with such behaviour.