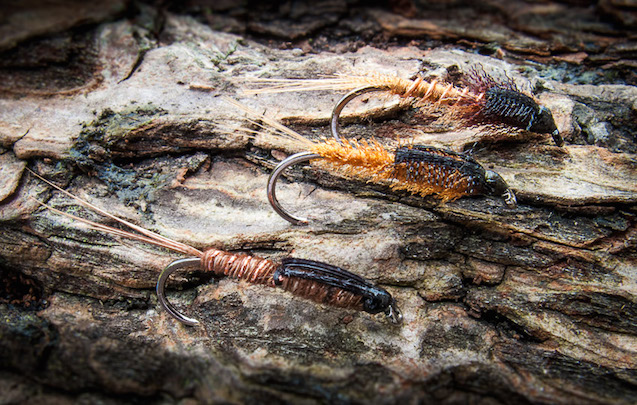 The Pheasant Tail Nymph is one of the most widely used flies in the world and over the years many variations and additions have been made to Frank Sawyer’s original pattern. Sawyer’s original PTN was definitely a very loose approximation of fish food. Tied using only pheasant tail fibres and copper wire it still contained all the key elements of the Baetis nymphs found on the Avon and other chalk streams and rivers. A tail, abdomen, thorax and wing case approximating the shape of the nymphs with inbuilt weight to provide the correct presentation. It was legless; Sawyer observed that when the nymphs were rising or drifting in the current their legs were folded into the body and so did not attempt to imitate them. The combination of shiny copper wire and dull feather fibres wrapped together provided an illusion of the translucency of the natural nymph to fool a lot of fish and made the nymph robust enough not to fall apart straight after the first one.

It’s a fairly crude imitation when you get down to it, but it worked and continues to work, most likely because the fish recognise it as having the elements of something edible and take it to be whatever they want it to be. Like a hungry man faced with a sizzling sausage. If it looks like a sausage, smells like a sausage, it matters not whether it’s an artisan crafted delicacy of free-range organic pork and finest aromatic herbs or a supermarket bargain breakfast brand; it’s a sausage and it gets eaten.

Sawyer’s original pattern is undoubtedly less used today than later variants tied more conventionally with thread rather than wire to secure the materials, but still using just pheasant fibres and copper wire to form the nymph.

I’ve tied a lot of PTNs like the one above over the years, but to be honest I don’t enjoy tying with pheasant tail fibres. They tend to be too brittle for my taste and one of the strands always seems to break at just the wrong point ruining a nicely proportioned fly. The fish don’t care of course, but that’s not the point. The fragility of the fibres also means that the fly doesn’t last very long. Trout teeth or just the stresses of casting and fishing can destroy the integrity of the fibres resulting in the whole shebang ending up in a bird’s nest of unravelling strands.

So I don’t tie them that way anymore. The PTNs in my fly box now are all synthetic and tied with organza ribbon and fibres. The organza inherently provides a similar translucency to copper ribbed pheasant tail. When wet the crimped nylon fibres both reflect and transmit light and the turns of stripped ribbon along the body hint at the segmentation and gills of the natural nymph. Organza can be cut and trimmed to adjust the length of the fibres allowing different hook sizes to be used while keeping the same profile and proportions, something that is much more difficult to do with pheasant tail.

I tie organza PTNs in weighted and unweighted versions using white thread and colour code the heads with permanent marker pens before varnishing; black for unweighted, orange for copper and red for lead.

That synthetic approximation of an organic imitation of a natural nymph is, for me at least, easier to tie and far more robust in fishing than a traditional PTN and catches me just as many fish. I also tie a second two-tone more subdued variant with a darker thorax and copper wire on the abdomen. Sometimes it makes a difference to the fish, sometimes it doesn’t; that’s the nature of fishing.

When I tie this variant on a Czech nymph hook I omit the tail and use more closely spaced turns of copper wire on the abdomen to add a little more weight. The organza is then spiralled up the shank and pulled into the gaps between the turns of wire and then trimmed short on the upper half of the abdomen. 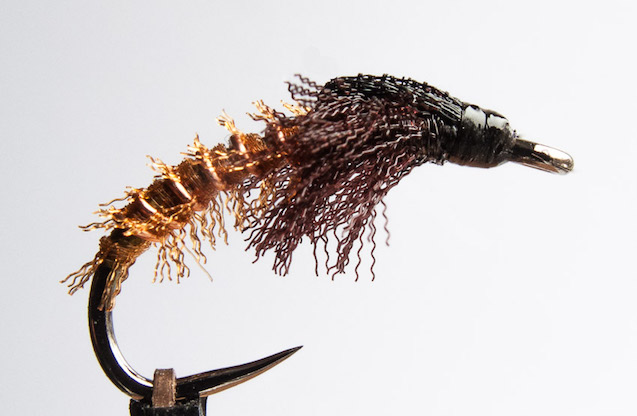 This fly hooked one of my best ever fish on the Taff. I was fishing in very low water conditions drifting the nymph under a dry fly down the edge of a run against the far bank. As the flies drifted down towards me the dry slid under and I raised the rod only to feel the line pull tight in a snag. I waded a few steps upstream hoping to change the angle of pull and free the nymph. It was only when I applied some side strain that I noticed that the snagged nymph wasn’t in the same place. With the 3wt rod bent over in a serious hoop I watched with some puzzlement as the end of my furled leader slowly moved diagonally across the current upstream.

Line started to click off the real as I bent the rod over sideways and my rather slow brain registered that there might just be a fish on the other end. I started to back out of the river into shallower water on the edge of a sand and gravel beach. The next five minutes or so consisted of a heavy weight pulling line off the reel and me slowly regaining some of it. Eventually I got in more line than I had lost and the steady pull on the line materialised over the sunlit gravel as a huge barbel with my nymph in the corner of its mouth. Now I’ve not been familiar with many barbel up close and personal, but based on a large number of carp and chub landed and weighed the fish that was now bemusedly wafting from side to side in the gentle current in front of me was well into double figures, possibly over fifteen pounds.

Now as I was trying to figure out how I might get a thirty odd inch fish in shallow water into a short handled eighteen inch scoop net, the fish decided it didn’t much like finning about in the shallows and took off for deeper water. I wasn’t overly concerned. I had a lot of experience wading and fishing this stretch of the river and knew that the gravel shelved gently down towards the channel along the far bank. There were no large rocks or other snags and the current wasn’t running overly fast. Surely it was just a matter of having patience until I could get the fish back into netting range. 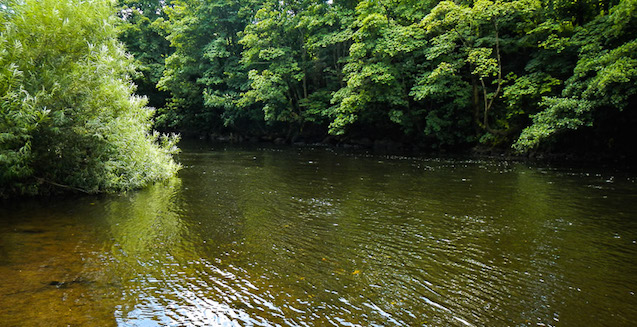 The observant readers among you will have noticed that earlier I said hooked rather than caught, because it was at this point that I noticed a problem. I saw the shadow first, a line of shade over the golden gravel. Above the flickering shadow, isolated in the middle of a tennis court sized area of pristine snag free sand and gravel, was a length of water polished driftwood. Part of a large tree branch washed down in a recent flood, it was firmly embedded in the river bed at both ends and gracefully curved to form an arch about three feet wide and a foot high. The fish swam out, belly hard down on the gravel, arrow straight through the middle like there was a flashing neon exit sign over the arch. The fly line was now running almost vertically down from the rod tip, jammed in a crack under the arch and then horizontally out into the river and the fish. Grating, creaking and stretching noises ensued followed by the inevitable slack line and despondency of a good fish lost. I waded out, poked the rod tip down through the arch and reeled in. The duo rig was intact and I guess the barbless nymph had just fallen out when I could no longer keep tension on the fish. I pulled the branch out of the gravel and dragged it to the bank. It was beautifully polished and stained by the water, but I wasn’t really in the mood to appreciate its aesthetic qualities at the time. It stayed on the bank until the first big flood of autumn, a mute reminder of what might have been.