Now, I write this article with some trepidation. Partly because of the honour and huge readership ESF has, but largely due to the risk of revealing the location of the river for which these musings relate!

For those that know me, I have a slight obsession with grayling. On a recent trip to Scotland with friends, I was more absorbed in catching a magical 3lb grayling than the monstrous trout. Once the trout season ends, actually, even before that, my mind usually drifts to winter outings chasing my favourite fish, but importantly, finding new locations to explore.

With the interest in grayling fishing growing year on year, it is becoming extremely difficult to find new places to visit, or indeed, fish a chalkstream that does not charge a hideous sum of money just to ‘experience it’. Grayling are seen as the new cash cow, as the demand for sight fishing winter chalkstreams far exceeds the availability. 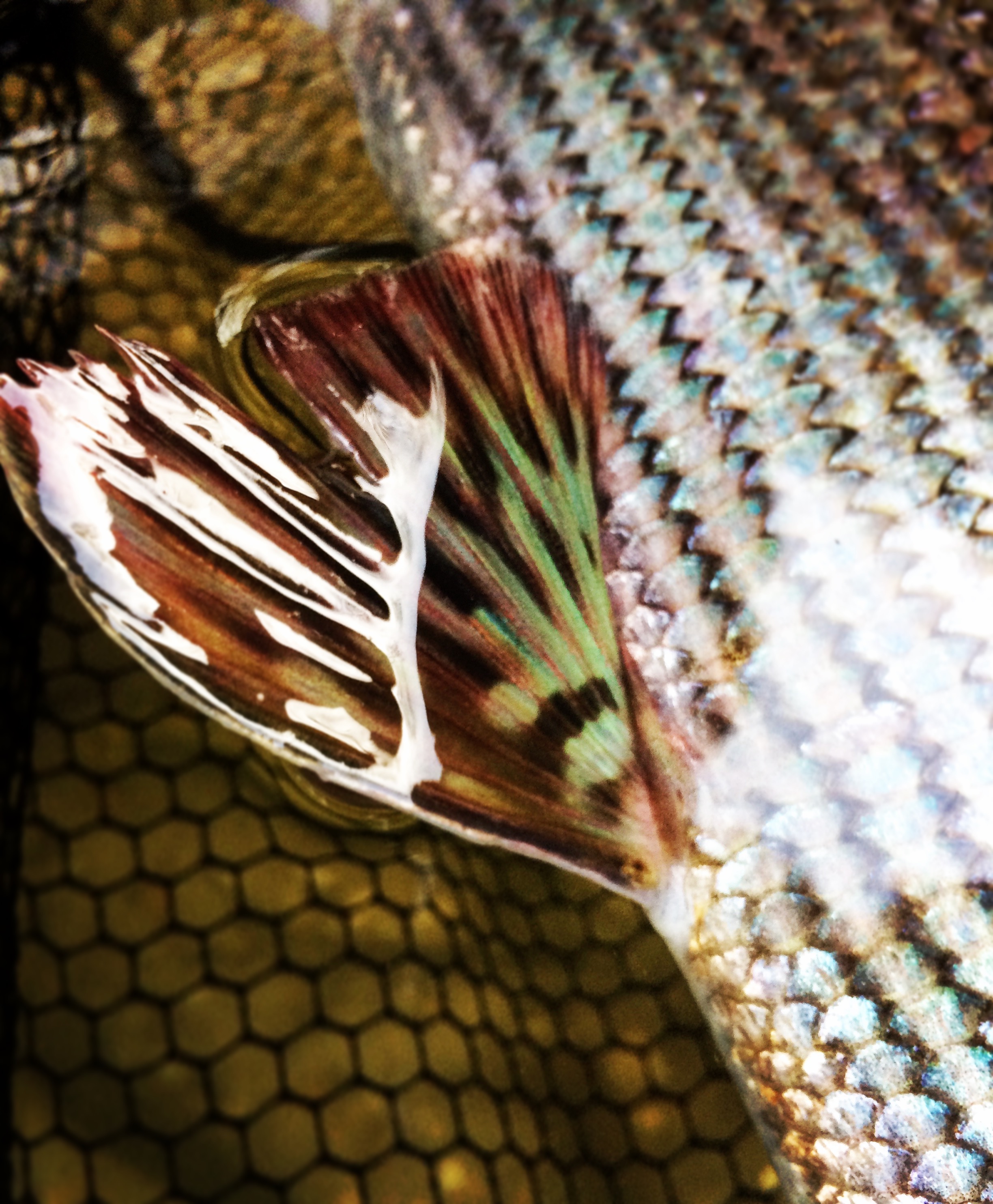 So herein lies my trepidation. After some exhaustive research, emails, phone calls lasting several months and some downright brown nosing, I managed to source a new stretch of river to fish for grayling. Now you must excuse my vagueness here, or ‘secretive squirrel Colmer’ as my close fishing friend defines me, but us grayling obsessives keep our existing and newfound rivers a closely guarded secret.

But hasten to add, my newly sourced river is a chalkstream, somewhere in England, lightly fished and by all accounts, ‘full of big fish’. So after waiting several months and enduring a period of very hard frosts, it was time to visit this crystal clear river.

I liken fishing a new stretch of water to being a child at Christmas. Excitement made for a restless night and after a hideously long drive the next morning, on an overcast day in mid-December I was peering over a bridge and into the water below. 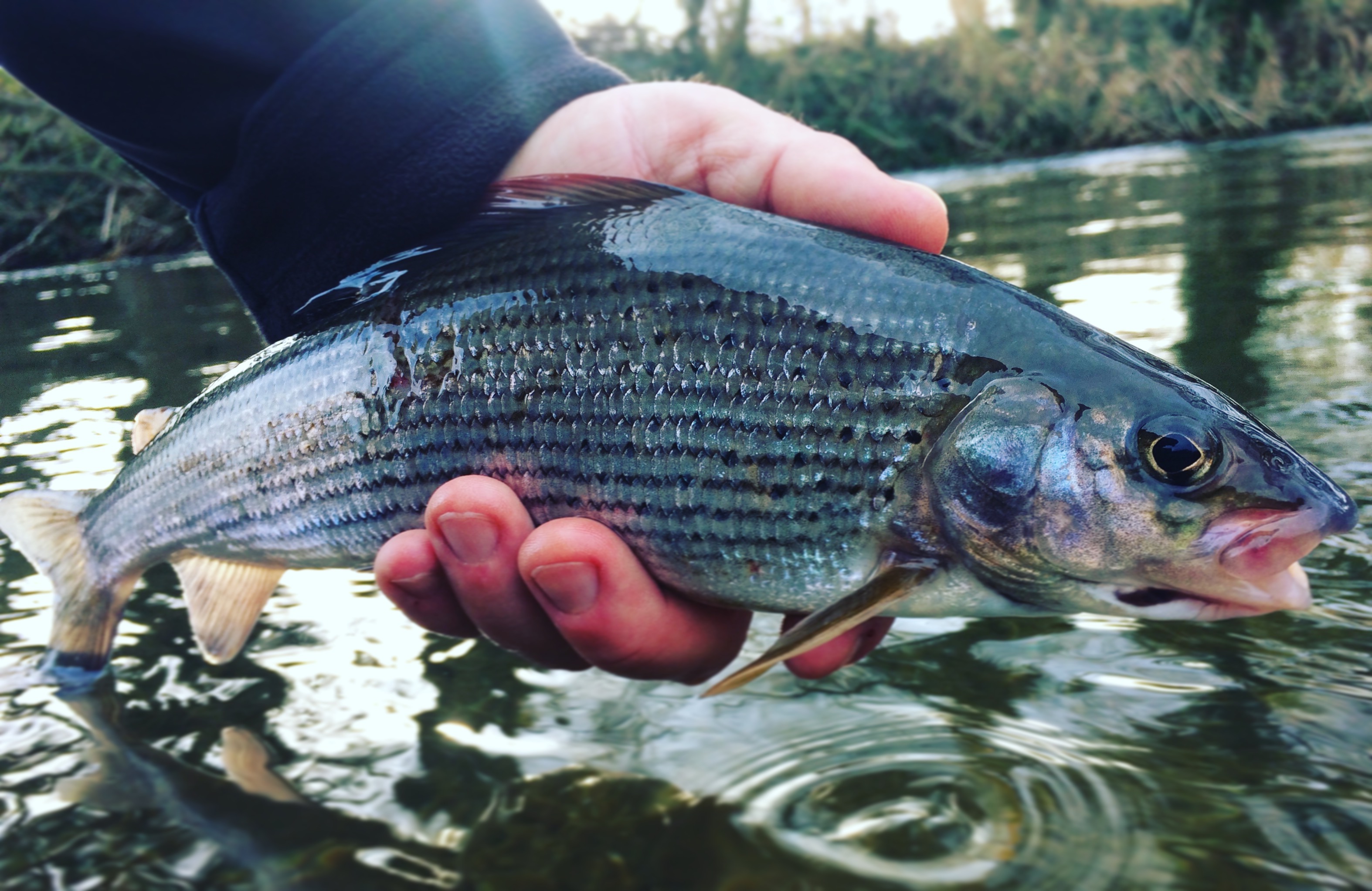 There is something about a river bridge, they act as viewing platforms, enticing you to stop and inspect what lies beneath. This little bridge was no exception, the perfect height to conceal my presence, but critically, rest my arms on and easily peer over whilst sipping coffee. After five minutes, a characteristic forked tail and red tipped dorsal fin appeared, along with three of its friends. The water was so clear you could easily distinguish between male and female grayling, with one a colossal fish that resulted in a colourful expletive.

Now I generally fish with friends, rod sharing and enjoying the banter that fishing with likeminded individuals promotes. However, not wanting to jeopardise future trips by turning up with a group of friends, on this occasion I was fishing alone. I was also eager to nurture my relationship with the riparian owners, and perhaps gain permission to fish again in the future.

Fishing a new river is always a pleasure and I tend to walk the banks before deciding on a tactic. This stretch of water included approximately 1 km of main river with the same on a small carrier. The top beat comprised the aforementioned road bridge, with the bottom beat the confluence of main river and carrier. Classic riffles and pools were evident throughout, along with copious bankside cover.

Just below the top beat was a deep pool that screamed grayling, and as I had already seen a large fish from my lofty bridge position, it seemed the logical place to start. Setting up a classic French nymph approach, I incorporated a reasonably long length of RIO two-tone indicator to take into account the varying depth of the pool. A single 3.5mm black and purple UV nymph was on the point, with a single dropper comprising a UV quill nymph.

When you have seen fish in a pool and it looks decidedly fishy, after half an hour and several fly changes later, it was a little frustrating when I was yet to touch a fish. But then that is the challenge of fly fishing, especially for grayling in mid-winter.

Moving on to another pool, my first grayling of the day was a fin perfect bar of silver no more than a pound. This was followed by several more similar sized grayling, but I fancied simply searching the water for a larger fish. One of the joys of fishing a chalkstream is actually sight casting to fish. Similar to dry fly fishing, or any method where you can actually see your quarry, the visual element heightens the senses.

At the end of the beat, the main river and carrier met. Of note, the water in the carrier was slower and slightly clearer, so I thought stalking a large grayling here would be worthwhile. However, it was evident that no management of the carrier had occurred for some time with a large amount of overgrowth present, but this was of course an advantage in concealing my presence.

On the first left hand bend I noted a large fish swaying close to the bank, with its characteristic features confirming a grayling. As I watched it from my crouched position amongst the brambles, a second ghostly shadow swam slowly upstream. Large grayling get the heart racing and this second fish was no exception. Watching it for several minutes, it started to feed above the first fish so I snipped off my two nymphs and replaced them with a single micro pheasant tail nymph. 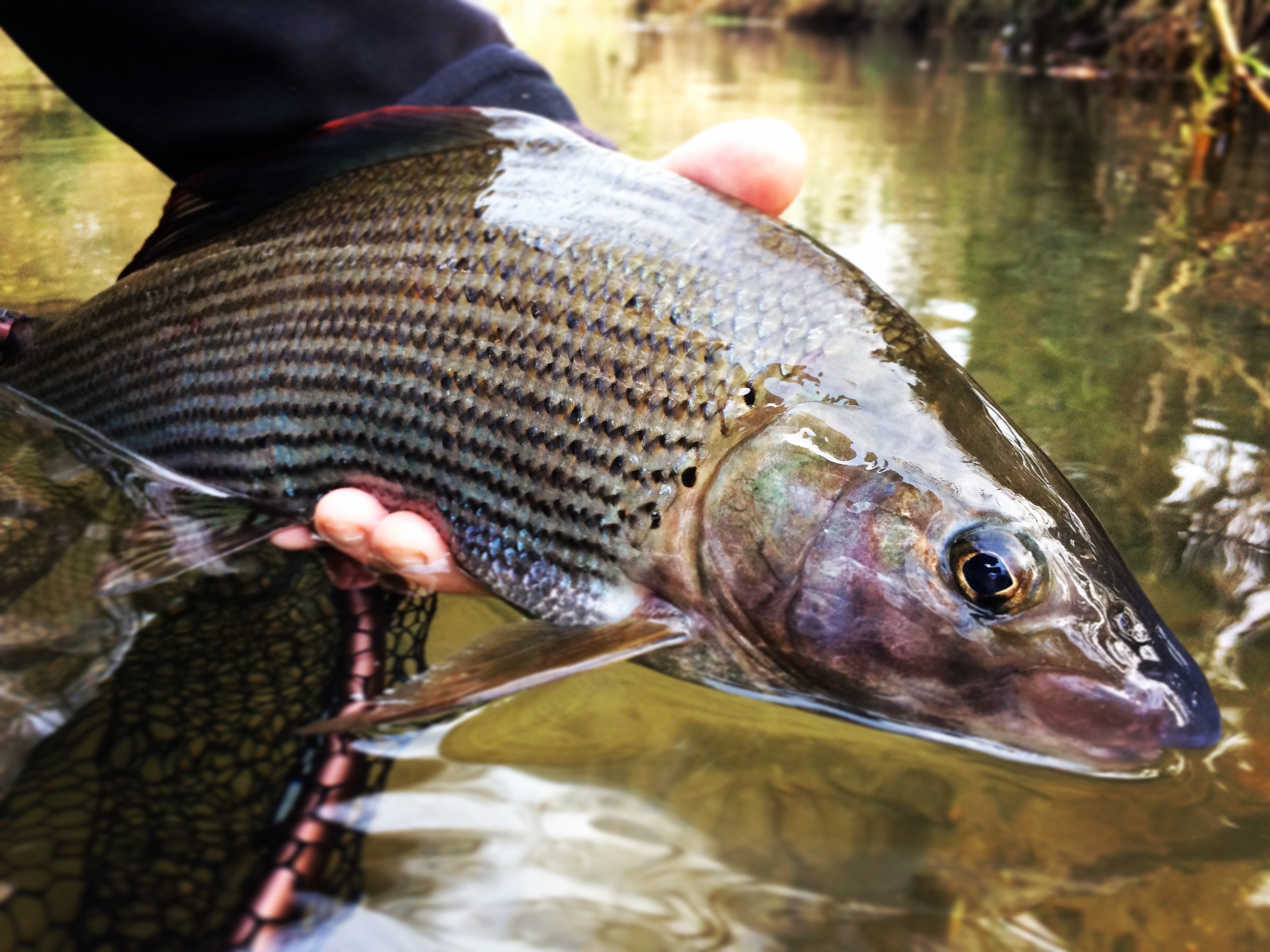 From my cramped position it was virtually impossible to get a standard cast in, so a catapult-cast was required with the aim of missing the overhanging trees. Well, that was the plan. Releasing the fly, its flat trajectory propelled it through the tree branches. Pulling the line back gently in the hope of it being released was in vein, as my fly wrapped around the branches in a tangled mess.

With a gently pull there was a characteristic crack of what I thought was my tippet snapping. However, the crack was a little more substantial as the tip of my four section Streamflex was now five. But what about the fish? Well, unsurprisingly my frantic arm waving had spooked them both.

With a broken rod it seemed an appropriate time for lunch, collect my spare rod and rest the fish. When fishing alone, it is during these moments that you question your sanity, overthink things but also ask yourself what you could have done differently.

But feeling suitable refreshed and my spare rod assembled, I walked back downstream and landed several more grayling from various pools before finally creeping back up the carrier. Arriving and my prickly position and peering into the river, the larger fish was back and this time, alone.

It was feeding hard, and after settling my nerves, my nymph landed just upstream. As I watched it descend through the water, and as if in slow motion, the fish moved forward, opened its mouth and engulf it. Striking, the fish initially shot off upstream before that classic, dogged fight indicative of a large grayling.

After several minutes of a determined encounter, the fish was safely in the net and displayed exquisite silver flanks, turquoise cheeks with those characteristic diamond eyes glinting in the afternoon light. I will be honest, whilst the fish recovered in my net I sat on the bank, let out a subdued ‘yes’ whilst clenching my fist. There is something hugely satisfying from landing a fish that required substantial effort.

Grayling take a considerable amount of time to revive themselves and it is imperative you take this into account before releasing them. So after admiring the fish’s beauty, I took several photos for prosperity and quickly took its weight, was it 3lb or more? Well, after subtracting the net it was exactly on that magical number and I could have stopped fishing there and then.

Holding the fish in the current, it was a pleasure to watch the specimen swim off strongly and disappear upstream. After my adversities, I proceeded to have a brief moment of quiet contemplation of a goal achieved.

Fishing is not always about numbers or size, but a large grayling is something quite magical and a prize to be remembered. The challenge of fishing somewhere new, sight fishing, snapping a rod but capturing that brief moment with a truly wild fish is something to savour and will be remembered for some time.