Tim Leppan shows us how he catches Garrick in South Africa

December is a time of rest and recuperation in any shape, way or form for most South Africans, leading the greater majority to the beaches. And I'm no exception to that rule. Every year for the past ten, I've found myself coming back to a little town tucked away in the Overberg region of the Western Cape that goes by the name of Struisbaai, a town that only really sees people in the festive season being a ghost town for the rest. However, this is my little secret, a wondrous place that would excite the most discerning of fly fisherman should they dare seek it out.

This town of Struisbaai is located at the most southern point of Africa, where the Indian Ocean meets the Atlantic Ocean, which produces the most picturesque and truly magnificent setting imaginable. It's an absolute gem. 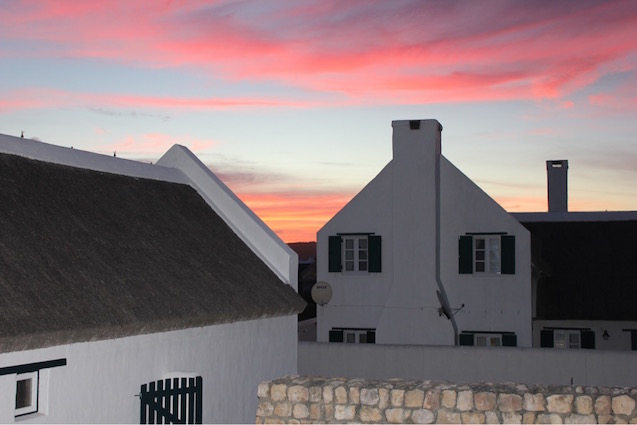 Illustrating the incredible scenery this place has to offer, you wouldn't believe that this is South Africa.

Struisbaai offers a wide variety of saltwater fly fishing, from the expansive unbroken beaches, to the small estuaries and even the rocky outcrops that are accessible by those that fear not.

This trip, however, I had decided to target the estuaries; De Mond being the name of the estuary I was set to target over the course of the week. 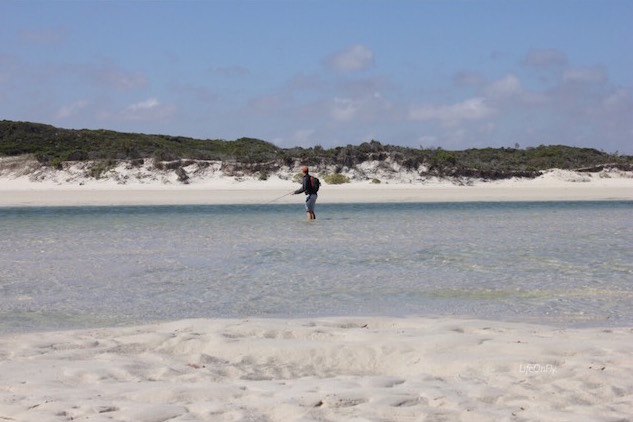 With weather warming up and the South Easterly wind blowing consistently, there was only one decision to be made - to fish or not! Not too difficult then. The South Easter blows the warm water from the last of the Mozambican current onto the shoreline and estuaries as well as adding a bit of colour to the water within which the gamefish feed more freely.

We were out to target a species called Garrick or Leervis to the locals. Garrick are out-and-out predators feeding off the abundant mullet that we have on our shoreline. These mullet hold on the drop-offs moving on and off during outgoing tide as well as the incoming tide. These were the ideal tides to utilize when in search of these Garrick.

Similar to the Seychelles, these fish become incredibly aggressive as the tide starts to push up through the estuary, almost as if they flick a switch and just turn on, smashing any baitfish in their path.

We would wait for the tide to start pushing through the mouth before we started targeting them. The pushing tide, as we refer to it, comes in very clear and can be distinctly different to the water in the estuary which is often a green peat-like colour hence the formation of a colour line as well as a thermocline with which these gamefish utilize in order to hunt down prey.

With this in mind, we pulled out our nine weight set ups, intermediate lines and chartreuse over white clousers as well as pure white brush flies.

Once rigged up we headed out in search of the colour line and it was then that the excitement turned into desperation - upon arrival we immediately witnessed mullet fleeing off the drop offs as bow waves were crashing in behind them - the Garrick were here!

When pursuing these fish, you ideally want to be making long casts and stripping the fly diagonally over the lip of the drop offs, waiting for that chase and massive smash as they engulf your fly.

It was only a matter of time before we went tight. Within five minutes we were having double ups, Garrick busting everywhere and excitement levels second to none.

As our fly lines touched the water and the first couple of strips were made, schools of Garrick would outcompete themselves for the baitfish imitations, a sight unseen to many. To see a school of eight or so fish chasing down your fly at speed is simply epic to say the least.

These fish hit the fly ferociously as well as having incredibly tough mouths and so once your Garrick had hit your fly it was an immediate strip-set to get that hook to seat followed by absolutely blistering runs peeling line no end. 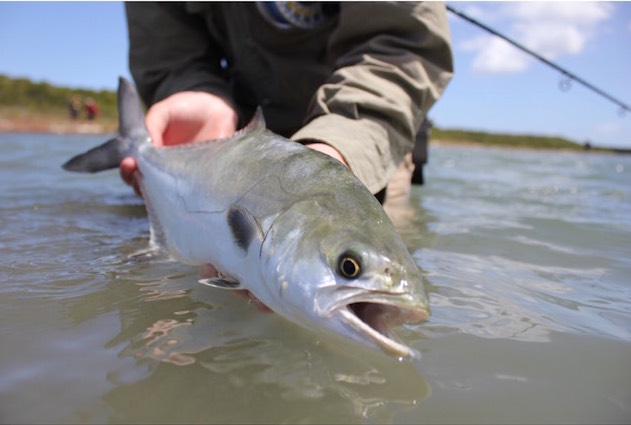 The environment within which we target this species is, quite simply, mind blowing what with the whitest of white sand and the bluest of blue water. This area, in terms of surroundings, has it all .

With such imagery comes incredibly versatile wildlife, from our national springbok to the thousands of terns that congregate in this area during the warmer summer months. Even the flamingos reckon it's a pretty epic place to settle down. 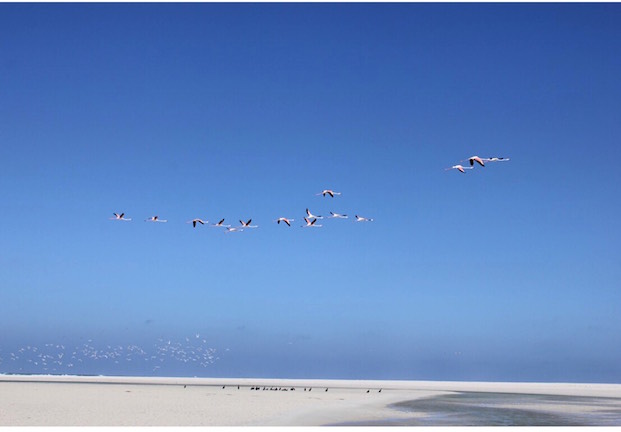 The Flamingoes taking flight as this photo illustrates the incredible birdlife that De Mond has to offer.

Having fished the pushing tide from the start of the mouth for around two hours, we decided to head up estuary in search of the slightly bigger fish. Through experience, we've come to realize that these bigger fish prefer to hunt in the murkier water higher up in the river system where the mullet tend to congregate, purely as a form of cover. However, Garrick have incredibly good eye sight as well as a highly sensitive lateral line with which they use to pick up movement, hunting  down prey successfully in all conditons. 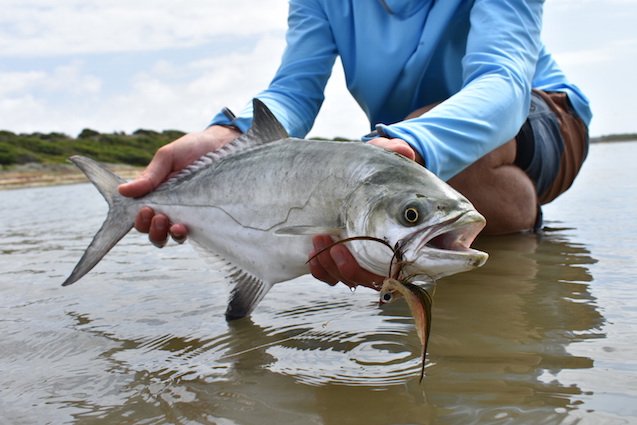 This photo illustrates how Garrick are still able to feed in the murkier water. Using natural baitfish patterns, in these conditions, prove to be the answer

Immediately we were onto fish, right on the colour line again. These fish were still young, however, giving an excellent account for themselves. We were completely blown away by the quality and condition of these fish, really and truly immense. A setting second to none.

Although the scenery was unreal, the evironment was still hostile in its own right. The salt and fine sand really takes its toll on your gear, as well as the winds that inevitably pick up. A good quality nine weight with a backbone to punch Clousers through the wind is essential as well as having a high quality reel that can stand the test of time and have the ability to apply brakes firmly and smoothly on demand. 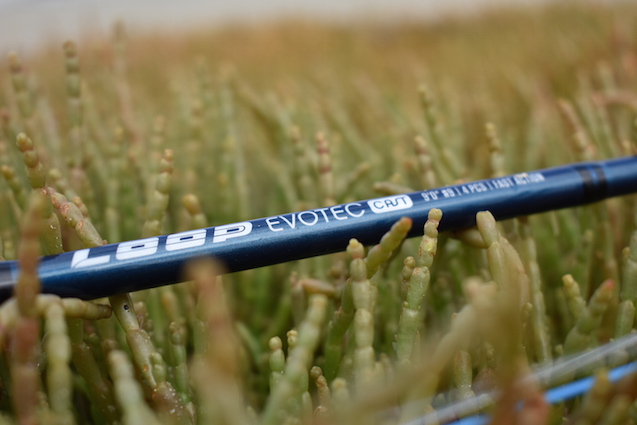 The Loop Evotec Cast fast action 9wt ( above ) did the job with no fault, making for incredibly pleasant casting, precision and distance with minimal effort, despite wind. The reel of choice was the Shilton SL6, below, which has been put through its paces all over the world and has still come out on top. 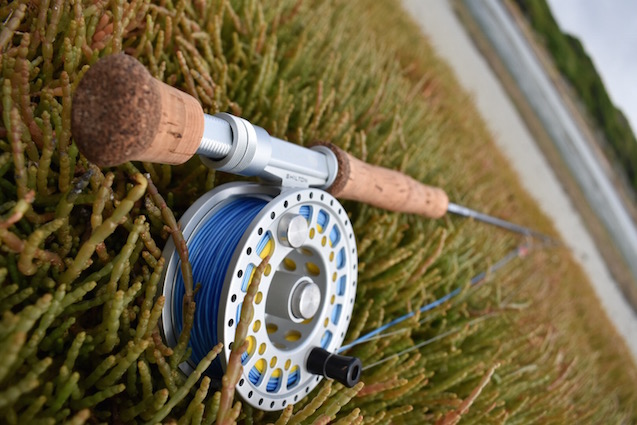 After a well deserved break from the sun, it was time to head up all the way in pursuit of the colour line once more. We found ourselves far further up than ever before when things started to change.

The wind had settled and the water became glass. There were noticeably less surface smashes and fleeing mullet and my hopes started to diminish. Sitting back and purely observing was my immediate take on the matter, ten minutes passed then twenty, then an hour...

It was then that I was caught off guard, dozing in truth,  when I heard a proper thump proceeded by water spray which shattered the surface. The only thought, nay prayer, that went through my mind was massive Garrick.

The next three seconds following the smash found me hurtling over the flats straight towards the drop off. As I approached, there was yet another thumping smash, this time only ten metres in front of me.

This was it, this was the fish I was after! Proceeding to strip out line, I managed to squeeze a quick twenty five metre cast to the right of the newly witnessed smash. The pushing tide would hopefully guide my fly line from right to left and by the time it had done so, I would have stripped in enough fly line to have the fly in the strike zone.

Before I knew what had happened, the line in my stripping hand disappeared. Split seconds was all it took; by this time the reel was fairly screaming!

It was obvious that this was a good fish and with bouncing head shakes and blistering runs, this fish had me eighty metres out before I managed to stop it, purely exhilarating.

Officially a dogfight. With only 20lb fluoro, I knew I was asking a lot.

After managing to apply the brakes on this fish and turn it around, I had to bully this fish if I wanted a chance to land it, despite the 20lb fluoro. The amount of rocky structure up-river was exponentially greater then that of the area of the mouth. You can imagine how this ratcheted up the tension .

The fish was still managing to slip line off the reel at this stage, despite the fact that I had tightened up the drag.

It wasn't long before I realized this fish would take off at speed and then hold in the current whenever I applied serious pressure, almost as if it would recuperate during these periods of extreme rod pressure.

I decided to give it everything, digging into the sand, leaning back and winding into it until I managing to break its movement. In doing so, I had finally turned the fish's head towards me and was able to get onto my fly line. I knew at this stage I was in with a chance.

The fish was now right next to the drop off and out of the main channel.

Fighting this fish over rocky drop offs had my heart in my mouth for the duration of the fight. It was only ten minutes later when I finally received a definite ID on this fish.

As the fish breached the surface for the first time, I heard my good friend, Donovan Marx, usher quietly, "my word, I've never..." This was the moment I knew I had got stuck into a good fish.

With this in mind, I ran up river using the incoming tide to my advantage. Within minutes I had the fish only metres in front of me. One last wind of the reel before I was able to tail grab this fish, resulting in much commotion and agitated splashing!

It was certainly my personal best Garrick in this area and one that took my breath away. This fish reminded me of a younger GT, the aggression, the take, the dogfight, incredible to say the least... 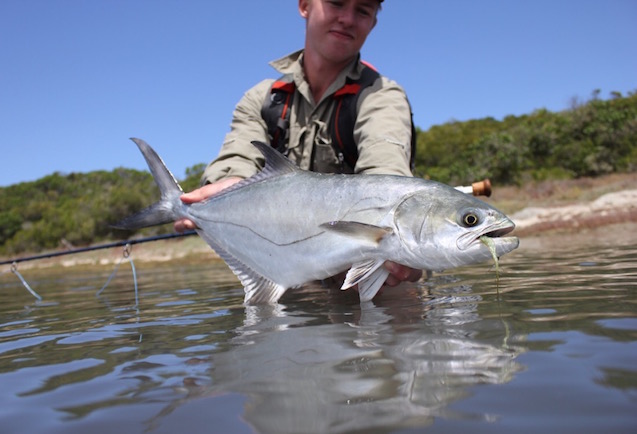 Above: The devoured brush fly pattern in all its glory.

We firmly believe that the health and well-being of the fish is of utmost importance, this fish was lifted out the water, briefly, for a quick snap and tag before release. 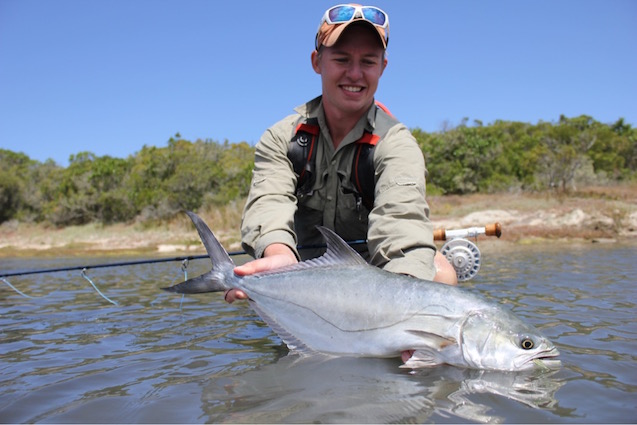 This fish was measured at 74cm to the fork and released safely to fight another day.

This fish drew my day to a close. It was one of those moments where you simply couldn't have asked for more. These are the moments that keep drawing me back.

At day's end, we had racked up well over 50 individual fish between four of us including the fish of a lifetime in this estuary; a day we simply could not forget. So many of us sit back and dream of the crystal clear water, warm weather and unparalleled fly fishing of the outer atolls of the Seychelles such as Alphonse or the likes of Cuba. However, I find myself here, in this remote piece of heaven where a thin blue line defines the enormous yet overwhelming dunes, located at the most southern tip of Africa.

To seek and to find defines this expedition, and to me often the best memories and experiences are made on the less beaten tracks, the areas and waters that many overlook and brush aside as being inconsequential. That's my playground, that's where my dreams are created...

And so to the many that have never come across this species, I strongly recommend you put them high on your list to target, and to those of you that have never visited South Africa, well , you know what I'm about to say ...