I was feeling depressed. Winter can be a quiet period for game anglers, the trout season closed. I usually keep myself busy fly fishing for grayling and trotting for chub, roach and dace. But this winter (2016) had been a washout, sometimes literally. An endless series of storms meant eight trips to various rivers had to be cancelled due to high winds and high waters. Even when the rivers dropped back high winds made casting tricky. It wasn’t all the weather's fault. I had had to move into a new flat and I had to help move mum into a new bungalow. All in all it had been a lousy winter season. I was making do with surfing the internet for fish porn and catching up on others' outings over Facebook and Twitter. And then ping, an email from John Aplin popped up in my inbox. 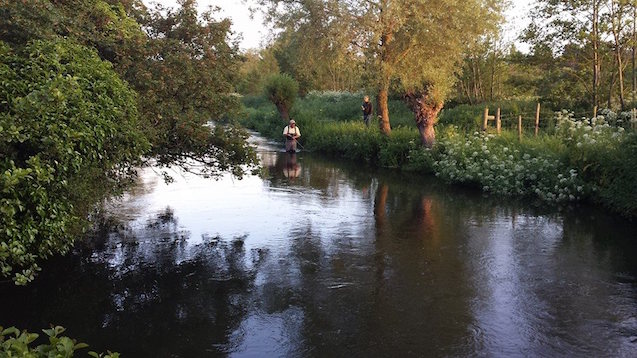 John Aplin on the Frome

John is one of those thoroughly sound, all round good chaps. A gentleman, a fine angler and a generous host. And he has some seriously good fishing on the Frome down in Dorset. Those of you who have read my previous scribblings will remember that last year John started up a new syndicate based around the Wraxall Brook, a Frome tributary. John’s email laid out his plans for The Little Syndicate for 2016. The Little Syndicate was getting a little bit bigger. As well as the Wraxall Brook and the Watery Beat on the North Stream John was adding the carrier on the South Stream close by his home, The Dairy House, plus a day on John’s premium Home Beat. More than a little tempting. I immediately replied to John’s email, “I’m in” and popped my cheque in the post. 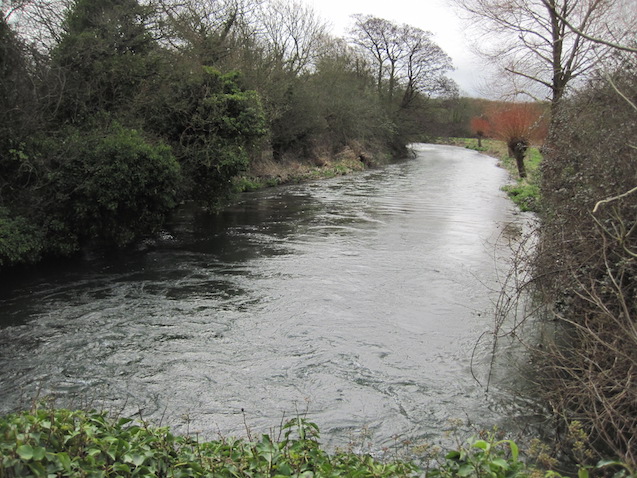 Large clubs and syndicates usually employ a keeper to keep the river in good order. To keep the subscriptions as little as possible John encourages the Little Syndicate members to help out.  So come the end of February we gathered at The Dairy House to do our bit. As with all clubs there had been a few comings and goings on the membership front. My mate Charles had let his place go due to other commitments but a few other people had been tempted by the intimate nature of the syndicate and the fabulous fishing so there were a few new faces to get to know. 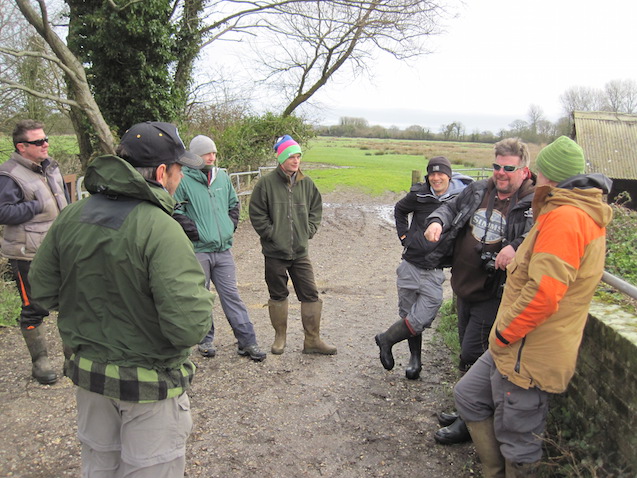 Introductions and handshakes out of the way John led us across the water meadows to check out the new waters. Whenever fishermen meet the first thing they ask is “how has the fishing been”. Sadly everyone else seemed to have had just as bad a winter as I had. Endless tales of wash offs and blank days. It was, in hindsight, rather cruel of John to show us gin clear waters teaming with trout and grayling given how poor our fishing had been of late. Further cruelty was endured with a visit to the Watery Beat on the North Stream. I was beginning to wish I’d brought a rod. 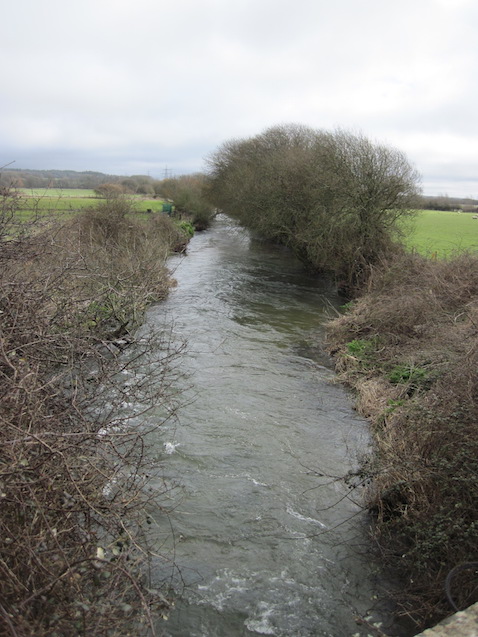 On our return to The Dairy House we discovered that John’s wife Andrea had laid out an elevenses of tea and coffee, cheese scones and home baked cake. Just what was needed on a cold blustery morning. It was a good opportunity to get to know each other a bit better and load up on carbs prior to the work party proper. 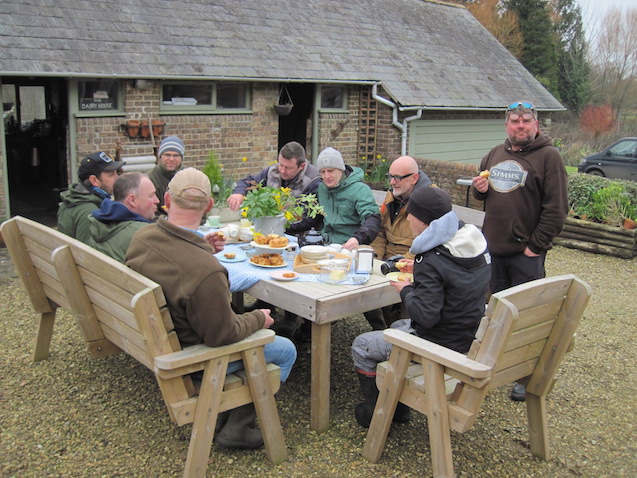 Tea and cakes courtesy of Andrea

In 2015 we found the Wraxall Brook overgrown and impenetrable. A good deal of sensitive clearance work was required to open up the access and to facilitate a cast here and there. Not many of us had fished the Wraxall Brook after the spring because of the dry summer and low water levels so we were interested to see what fettle the river would be in after the warm, dry summer and mild, wet winter. 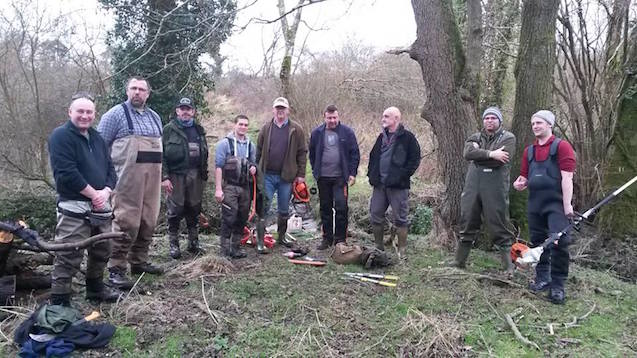 Work party keen to get started

It was surprising how little work was actually required. A little light trimming of some of the new willow growth and some removal of debris washed in by winter spates. The river was low and clear and the gravels clean and bright, it looked eminently fishable. We even saw a few fish darting into the depths as we worked up and down stream. 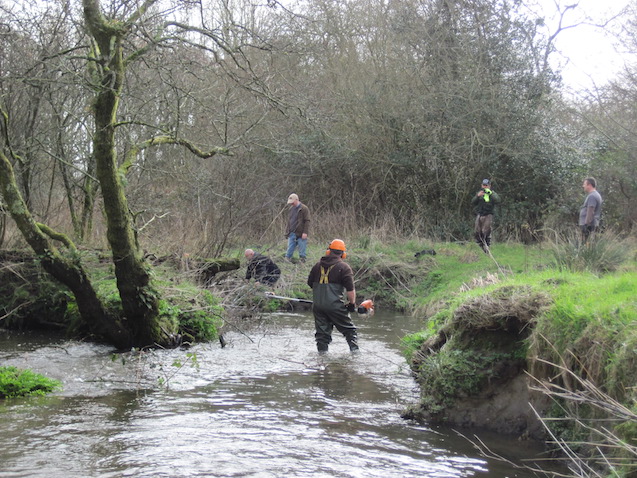 Award for dedication to river work went to Jim who waded in deep, soaking his phone in the process, to clear the overhanging brambles from the old hatch pool. 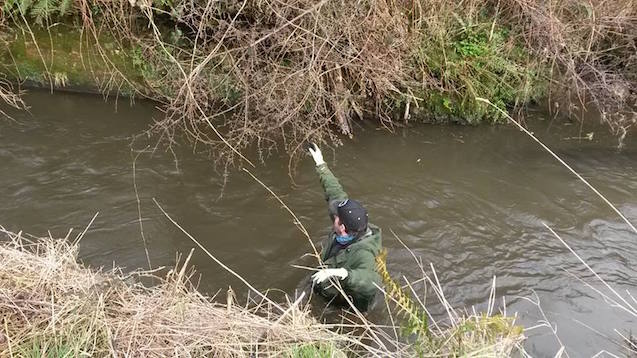 Jim in deep at the old hatch pool

It is fascinating getting to know a new river. You look at the Wraxall Brook and think it is as natural as the day it was born. When you get in it, and work on it, or fish it, you realise that the hand of man has had much influence in shaping the brook. Some of that influence is quite recent, large woody debris pinned in to create habitat and protect banks, kickers and V shaped deflectors designed to trap sediment or scour gravels. The old hatch pool is a more ancient structure, presumable there to divert water via a leat into a pond that would have served one of the many mills along the brook's course. The hatch gates and leat are long gone but the remnants of the hatch walls are just visible beyond the curtain of brambles.

That work party whetted my appetite and John had mentioned we could come and fish the carrier for grayling if we had time prior to the end of the course season. Dom, one of the new members, asked if he could join me so in mid-March we met up at The Dairy House and set off across the fields to explore one of the new carriers that John had added into the Little Syndicate. The South Stream was high and pushing through hard, making wading tricky. Nothing was hatching despite the warmer weather and light breeze so Dom and I tied on a duo of nymphs and ‘short lined’ our way upstream.

Dom on The South Stream

Despite our diligent effort we went home unrewarded. The fish were keeping their heads down awaiting calmer waters.

All my plans to get down to the Little Syndicate early in the new trout season were frustrated by bad weather and/or high water. It was mid-May when everything came together and I was back in Dorset. I decided to start off on the South Stream. As I stood at the bottom of the beat looking upstream a few fish were rising to small olives encouraged by the warmer weather. 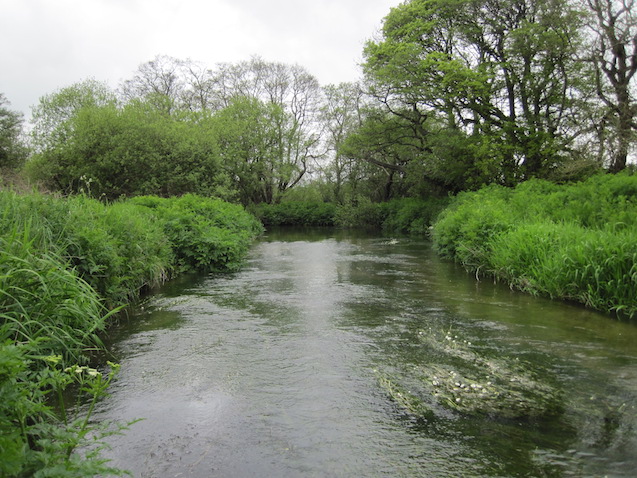 I put on an olive emerger and took a beautiful wild trout of 14” from a narrow channel between the swaying ranunculus. There is nothing quite like that feeling of catching your first fish from a new river. 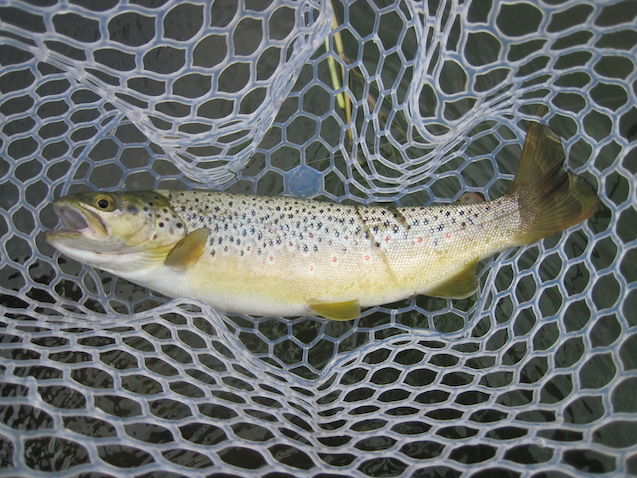 As I worked upstream a few Mayfly started to struggle out of the surface. Most of the rising fish ignored the chunky Mayfly emergers and duns in favour of the olives so I stuck with my pattern. Then a fish rose splashily at a Mayfly so I switched to a Mayfly dun pattern. I am always struck by the variation in Mayfly colouration. A few days earlier I had been fishing on the Loddon where the Mayfly tend to be the colour of clotted cream, a rich buttery yellow. These South Stream Mayfly were much darker. 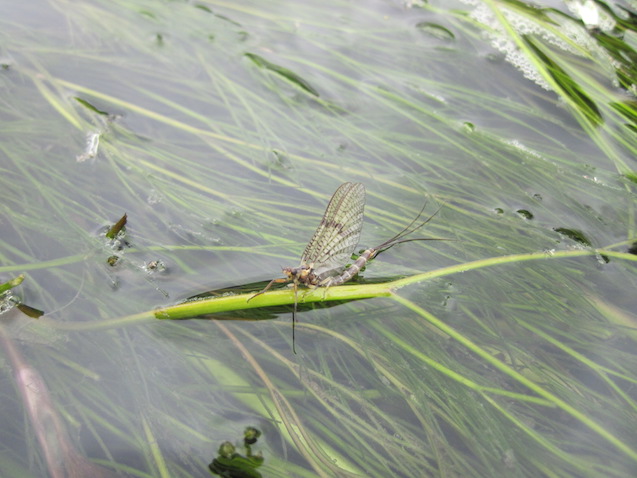 The fish took my imitation enthusiastically. I released it and sat back on the bank to savour the moment. I was struck by the fact that the temperature was dropping, quickly and noticeably. The forecast was for a front to push through that morning, here it was. The sudden drop in temperature killed the hatch and the fish sunk away back into the depths. The river was suddenly quiet.

I hadn’t put on my jacket and rain was threatening so I went back to The Dairy House where I found John’s wife Andrea busy in the veg patch. She was a little shaken after a dead baby rabbit fell out of the sky and nearly hit her, presumably dropped by a crow or buzzard.

I decided on a change of scene and headed for the Watery Beat on the North Stream, about 10 minutes drive from The Dairy House. John had managed to get access to the water below the bridge so I negotiated the somewhat circuitous route that took me to the bottom of the beat. Despite the cold snap, olives were still hatching and a few fish were rising here. I put back on the olive emerger and had another nice fish within a couple of casts. This raised my spirits.

Wading is always entertaining on a new beat. One is never quite sure how to navigate upstream. On this section the river is pushed from one bank to the next, by fallen trees, scouring deep holes as it does so. I nearly disappeared into the first as I progressed upstream. I backed up and negotiated an alternative route clinging onto willow branches to stop me sliding down the steep gravels. 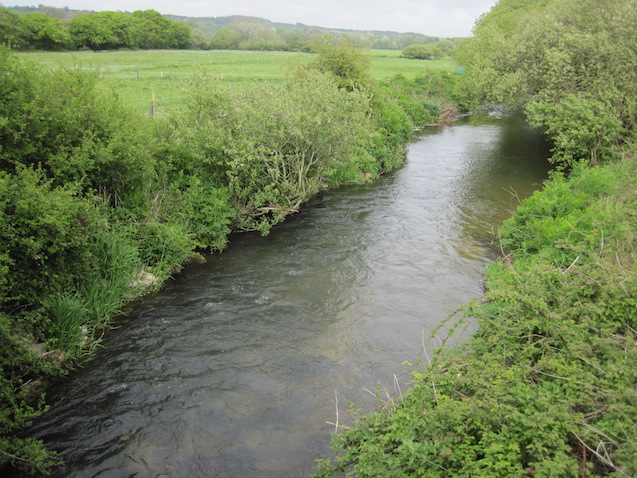 Watery Beat below the bridge

As I neared the bridge I spotted a better fish rising at the tail end of the fast water emerging from under the bridge. I waded gingerly toward it, the bed sloped away and I had to go into reverse when I felt the gravels sliding away beneath my feet. I covered the fish as best I could with the limited back cast. A clumsy delivery put the fish down so I climbed out and made my way around to the beat above the bridge. 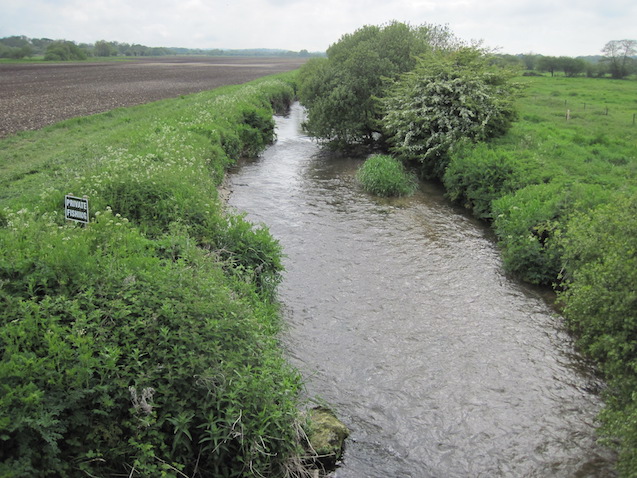 Watery Beat  above the bridge

I prospected up the first steeper, fast flowing section fringed by willow but brought nothing up. Above the willows the river slows and flattens. Fish were rising splashily to Mayfly duns. They were spooky on the flat, mirror calm pool but I managed to fool one or two small fish into taking the JT Mayfly. A little further up I spotted a better rise tight up against the bank. I edged up getting as close as I dare. Extending line I threaded the back cast through the tree branches behind me and dropped the fly three foot upstream of the rise. The fish must have moved because it hit the fly almost the instant it touched down. The fish rolled over the fly and I paused before lifting into it. It stayed on for thirty seconds before slipping the hook. The fish must have spooked the pool because, despite waiting for five minutes, I didn’t see another rise.

The start of the new season on the Little Syndicate had been a mixed bag but the quality of the waters and the fishing, shone through, even if the sun hadn’t. Little by little I was getting to know the beats and as I walked back to the car I was looking forward to a return visit, I hoped it wouldn’t be too long in coming.