I’m very fortunate to have some great river fishing almost on my doorstep. Just a one mile drive gives me access to fishing 365 days a year on the Taff if I want it, river conditions permitting. The winter provides fantastic grayling fishing, followed by trout in the spring, summer and autumn. When the weather warms up I’ll take a break from the river and give my carp and saltwater fly rods some exercise, but then I’ll return after the coarse fishing season opens and set aside a few days devoted to stalking some big barbel with a fly rod. 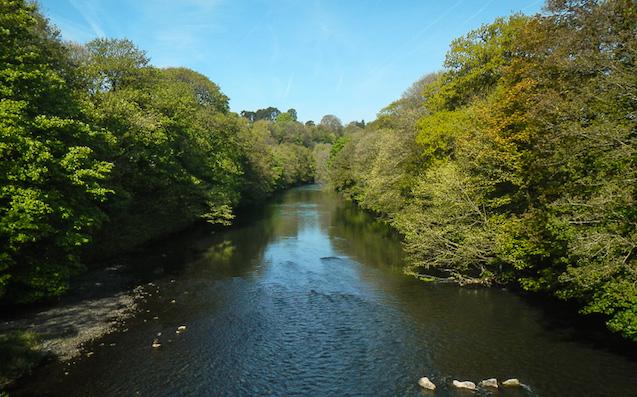 In the UK, natural stocks of barbel are confined to rivers in eastern England, which were connected to the Rhine and other rivers of mainland Europe during the last ice age. Today, after stocking into many rivers throughout Britain from the Clyde in the north to the Hampshire Avon and the Stour in the south west, catching a barbel on the fly is an attainable target for most anglers in the UK.

There are only two rivers in Wales that hold decent numbers of barbel, the Wye and the Taff, although now that the river Ely is connected to the Taff via the lagoon of Cardiff bay, I understand that they are beginning to show up there as well. Barbel were introduced to the Taff a long time ago, how and by whom I’m not sure. Some anglers I’ve met say they were stocked officially from the Taff feeder canal around 20 years ago, others that they were stocked unofficially by anglers bringing small fish back in buckets from the Wye. They may breed or they may not; I don’t know, but I’ve never caught a small one. The river attracts a good number of coarse anglers who focus on the barbel fishing and keep their favourite swims a closely guarded secret. There’s a good deal of pre-baiting goes on to attract barbel and hold them in the favoured areas. All the pellets, boilies and luncheon meat being hoovered up by the fish packs on weight and the current Taff record stands at 18lb 1oz. 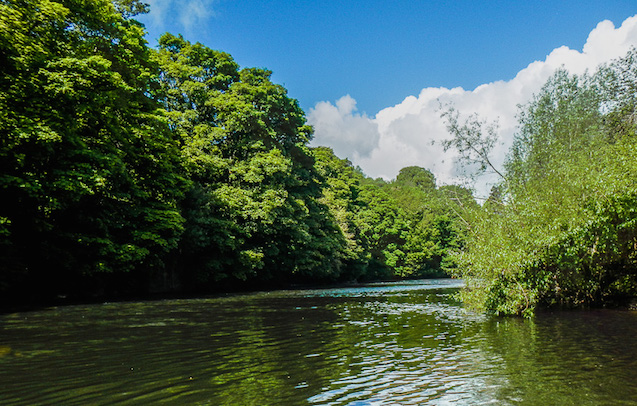 When I’m going out after barbel I leave the 3wt trout rods at home and take a fast action 5wt or 6wt rod with plenty of power in the butt section, coupled with a reel with a good smooth drag. A 4ft furled leader is looped to the fly line and 8-10ft of 8lb or 10lb fluorocarbon attached to the tippet ring. With this setup, I can either fish close in on a short line, or chuck a heavy tungsten nymph a reasonable distance with a single back cast. Barbel are not a particularly spooky species and if you wade stealthily you can approach reasonably closely and I have caught several fish pretty much under the rod tip while wading waist deep.

It’s best to fish just a single heavy fly. The barbel are feeding on the bottom so you need to get the fly down quickly through the current to them. With fish running to over 30 inches, having a second fly on a dropper waving around is not a good idea; it risks hooking the fish in the back or tail during the fight, which is not good for the fish, nor good for you when trying to control a strong heavy fish in a fast current.

The only time I will use more than one fly is in a duo rig when I'm fishing deep slow water at a distance and I need the dry fly to suspend a lightly weighted nymph or shrimp just off the riverbed and act as an indicator. Under these circumstances, where the fixed link from the dry to the nymph is four feet or more, or when I’m using a dynamic duo rig (ESF# 67), which allows the nymph to be pulled away from the dry fly by a strong fish, I don’t need to worry about the fish getting hooked by the second fly. 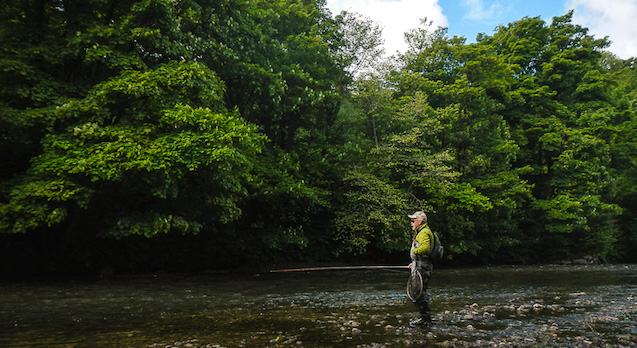 On a sunny day with clear water you may be able to sight fish for barbel feeding on nymphs among the gravel and weeds.  However, if there’s a bit of colour in the water don’t despair. Conventional wisdom on barbel fly fishing deems fishing in other than clear water a waste of time, but my experience on the Taff is that a bit of colour in the water after rain doesn’t rule out your chances of catching a barbel. Look for sections of river with a deep pool below a shallow run of fast water like the one in the photograph above. If the pool has a few large submerged boulders so much the better; this is the place to fish with a short line, steering a weighted nymph into the likely spots around the rocks.

With their underslung mouths barbel are well adapted to feeding on the riverbed, rooting through gravel and small stones for nymphs, larvae and shrimps. They are omnivorous basically, so a generic buggy fly pattern does just fine, there’s certainly no need to over complicate things. They also eat small fish and fry, particularly early in the summer and I’ve caught them on my Diawl Trwm streamer pattern (ESF #64) bumped along the bottom while fishing for big trout and chub.

Barbel are strong fish and have an almost uncanny ability to use their shape to stick themselves to the riverbed. Indeed, sometimes the first indication you will get that you have hooked a big barbel and not snagged your nymph on a rock, is when the snag starts to move away from you. When I hooked my largest barbel I was certain my nymph was jammed under a rock and had taken a few steps upstream in the hope that the change of angle would free the hook. It was only as I was preparing to drop the rod to point at the snag and pull directly on the line to break free that I noticed that the line was moving sideways across the current and the rod was bending over without me putting pressure on it.

Whatever fly you use, do make sure it’s tied on a decent hook. Overcoming the strong runs or the dogged riverbed hugging to bring a double figure barbel to the net needs a strong hook. 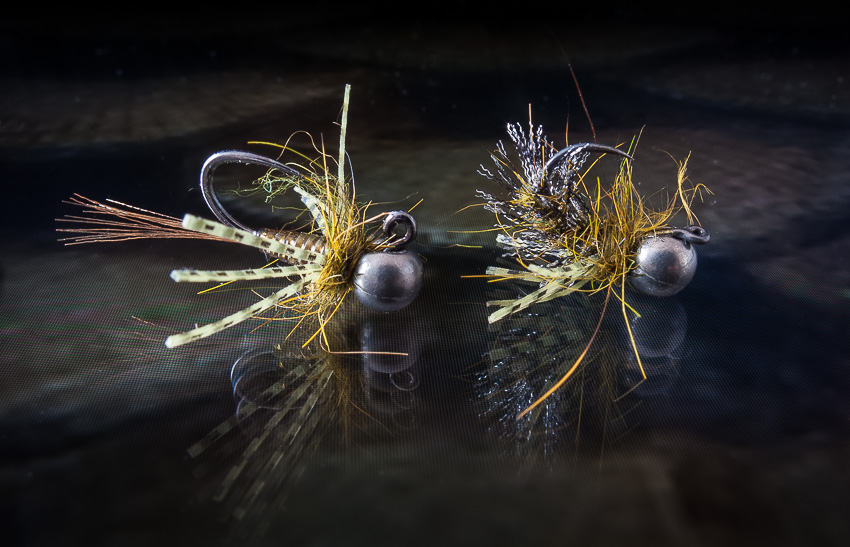 My favourite barbel bugs are tied either on Dohiku jig hooks, which are formed from heavy wire and have a nice incurved point, or on Guru QM1 hooks, which are my favourite for tying flies for big carp. Getting the bugs hard down on the river bed needs a decent amount of weight. However, attaching a hefty 4-5mm tungsten bead to a relatively small hook by threading the bead onto the shank can obscure the gape and may compromise the hook hold on a large fish. I tie my big bead barbel bugs with the large slotted tungsten bead attached on top of the hook shank using a length of monofilament whipped to the shank. This allows me to use either jig or conventional hooks to tie the bugs and have them bounce nicely along the bottom point up without snagging. 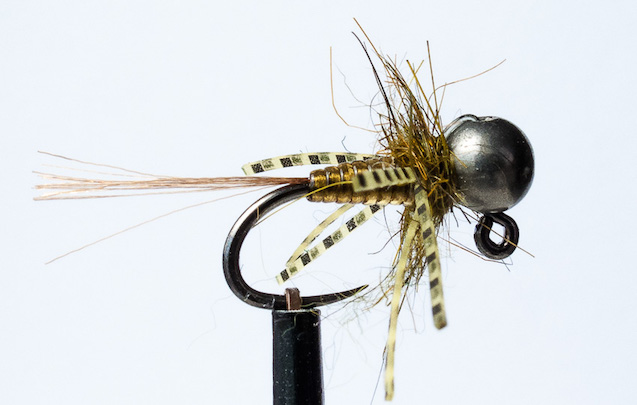 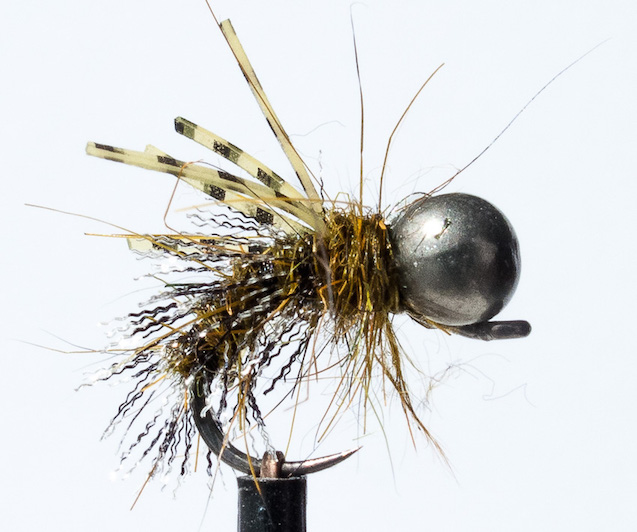 If you are going out after a barbel, a final word on fish welfare. Barbel are very strong fish, you won’t be bringing a big one to hand and releasing it quickly like a small trout or grayling, so they do need time to recover after a being played and netted. If you want a photograph leave the fish in the net in the river to rest until you have your camera ready and then quickly take the picture with the fish over or in the water. Let the fish fully recover, supporting it with both hands facing upstream in a decent current, until the fish begins to swim strongly. Then let go and be thankful.