Ever considered fishing in Slovenia? Andy Buckley tells us what he experienced on a recent trip.

"The fish here aren't trophy sized fish and they're quite easy to catch," declared renowned Slovenian fly fishing guide Uros Kristian, "but in a few minutes time you'll understand why I brought you here". A little bemused by the Slovenian style of 'soft sell' Will Robins and I had little choice but to do as we were told. We had spent the four days previous chasing huge grayling and brownies and I wondered if our guide had chosen the Radovna river to bring us back down to earth. That is until the car swept around a sharp left hand corner and into the Radovna valley.

If you were to imagine the most perfect and quintessentially alpine landscape then the Radovna valley and the river at its feet are just that. Snow capped mountain tops give way to dark and dense pine forest, the crystal clear waters of the Radovna river only become more beautiful where the river is deep enough to gain its green and blue hues. Each and every stone in the river is rounded and polished as if a master jeweller had created and placed them there himself. 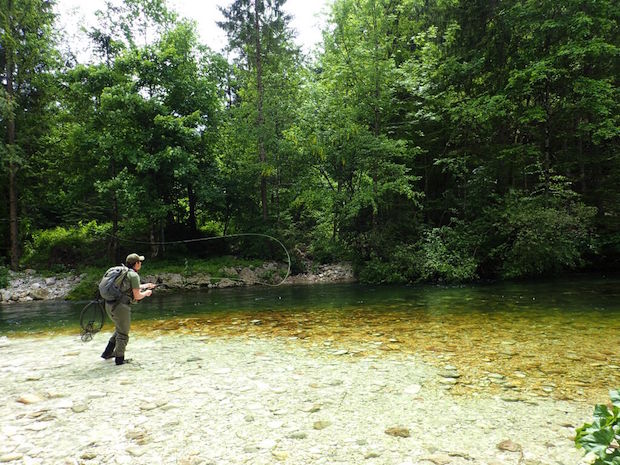 Our guide had chosen to deliver us to one of the more spectacular if not slightly unnatural areas of the river at Krnica. Our view directly upstream of the bridge was of the Krnica weir, a huge man made structure built approximately 400 years ago when the Radovna valley was home to paddle wheel powered sawmills. Fortunately these days the area is now solely a home to trout, and lots of them. And I mean lots, innumerable small dark shapes swung and lifted and nymphed and rose, wild rainbows and brownies side by side, often rising to the same insect.

"What dry fly should I use?" asked Will while holding out his dry fly box. Uros theatrically closed his eyes, held out an index finger and landed it amongst the rows of neatly tied imitations. "That one is perfect! Seriously guys, today is a day off from all the complicated fishing. Here it's different, it's crazy stuff!". With our guide's point well and truly made we rigged up long and light leaders on our softest rods and made our way down to the river. 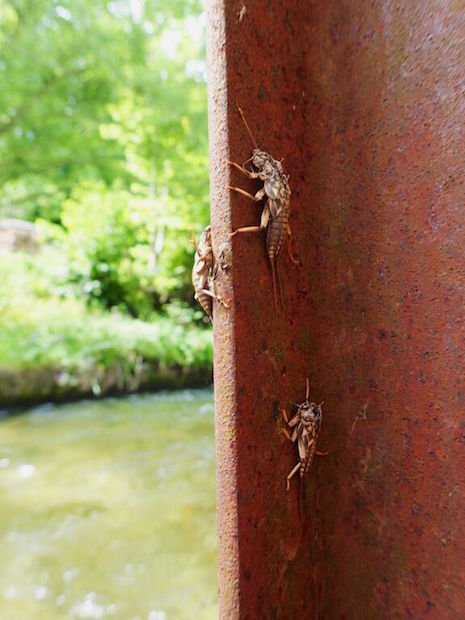 I chose to sight nymph while Will opted for a big Stimulator having been attacked by a swarm of enormous stoneflies. Uros was right, within a few minutes I did understand why we were there as we landed and released a procession of the most beautiful trout I have ever seen. Palm sized rainbows flush with fuschia and dotted with jet black spots or wild Danube strain brown trout which are decorated more sparsely with crimson speckles over pale buttery flanks.

Our guide hauled us away from the huge weir once our catch count resembled a cricket score and drove us a few miles further upstream to the more wild and remote areas of the Radovna. Will and I used the french leader through the tumbling riffles and pocket water, between the glassy glides and pools which held the most promise of sight fishing with dries. The french leader was deadly and even though an angler may only use one fly on a cast in Slovenia there were many periods of the day when it seemed harder to not catch fish. 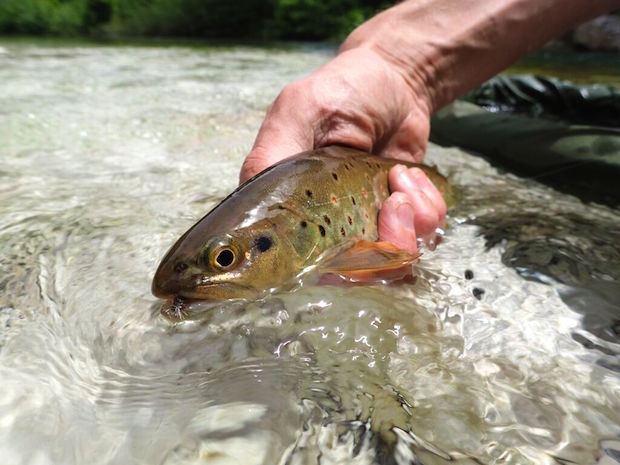 The dry fly fishing was phenomenal. The stonefly hatch continued throughout the day and we were fortunate to watch fish leap from the water to take the large and cumbersome flies in mid-air. Most of the fish we caught on dries took caddis patterns as we all felt that the stoneflies were just too big for the trout - watching them crawl up your waders felt like a scene from a horror film, it was quite disconcerting! 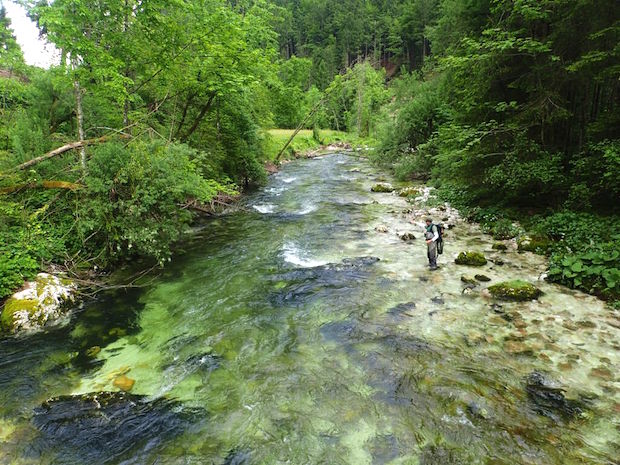 Most of the fish we saw were between six and ten inches but owing to their environment were capable of spectacular fights. One pool we found held two larger fish but they were in the most inaccessible of areas - as the largest fish tend to be. Having shown no interest in any dry flies I drifted some of Uros' very heavy Slovenian style jig nymphs which immediately stirred the attention of the two specimens. On the third drift through the fly was initially ignored by both fish but the really big guy turned on his tail and chased after it downstream only for yours truly get caught by surprise and strike the fly from his mouth. Bugger. "At least 45cm Andy, the biggest I've seen here in a while" - guide's sympathy is clearly a global phenomenon. 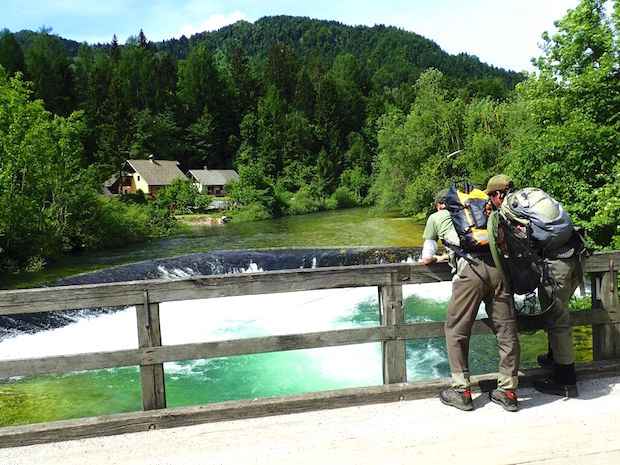 It was really no issue, by this point in the day Will and I were in a trout induced state of bliss, a legal high for which missing a take was no panacea. I've no idea how many fish we caught that day and we would probably rather not know. More remarkable is that so many of those perfect little trout are so memorable. The "war dog" rainbow that Will caught from the weir, the caddis munching brownie that needed a cast I'll probably never be able to make again, the pocket water fish Will eventually caught from behind a large boulder because he knew there would be one there - these fish provided us with some of the best memories of a whole week of fishing. 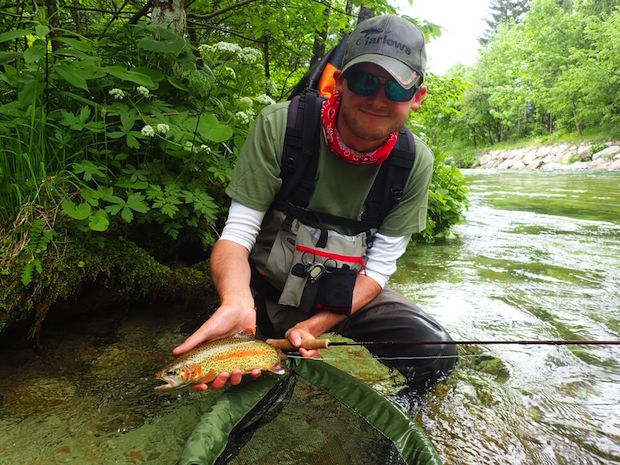 Tucked away in the North-West of Slovenia there is a gem of a river. In the most spectacular of alpine environments the intimate Radovna provides the angler with the opportunity to relax, take their time and enjoy just being there and I honestly believe even the heart of the most intense and ardent trophy hunter will be softened by the innocence and charm of the Radovna valley and its special inhabitants. I know mine was.

Fishing guide Uros Kristan's page  - http://urkofishingadventures.weebly.com and a link to the Slovenian Institute of Fisheries Research - http://www.zzrs.si/en/index.php where anglers can learn more about the state run Slovenian fisheries.

To read more from Andy please visit his blog -  www.incompleatangler.com