A day's fishing doesn't always go to plan but it feels all the more sweet when it does. Tony Mair shaes a day on the Wylye

Oftentimes, when fishing and not catching, nor even attracting, in the solitude which all fly fishers crave, but also because of it, the mind meanders, and into negative space – ‘I’m a crap angler’. We all have felt that.

But occasionally something special happens, and the world is a better place, and one's participation in the importance of angling history is reconfirmed.

My emotions this week, on Wednesday, went thus. From frustrated uselessness, to “God, I’m good….” And of course, neither is true.

A sunny morning on the Wylye, when the easterly wind made casting from the right bank, complicated, and particularly with trees behind both shoulders, and the river running due south at Stapleford. Fly selection was difficult for little was coming off, and in the wind it would have been hard to identify what was, anyway. Rises were few, but it seemed that if casting to feeders was impossible, the right fly might entice some interest, so experimentation was the order of the morning, with the smaller seemingly more likely to attract interest.

I tried quite a few flies, rose a couple, pricked one, hooked into and lost two…so nothing netted. Others had more success, but then an angler only had to catch one to be more successful than me that morning! 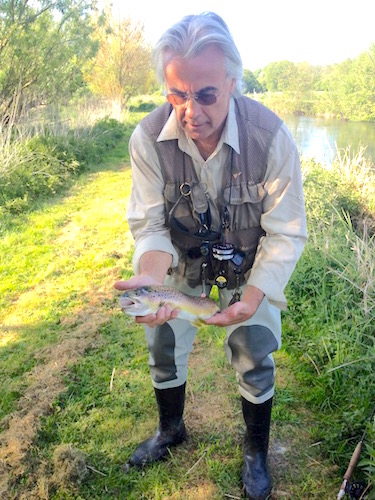 In the afternoon, and still fishless, I engaged with a recently arrived angler and described with absolute truth, his prospects, based on my experience of previous hours. He was not deterred! And as we chatted, he on the left bank, me on the right, I noticed half a rather large tail swirling just upstream of us, and closer to my bank. Hhmm!

The optimist in me, assumed his rightful superiority over his weaker opposition.

The tailed wonder was moving left and right, within a tight space, probably no more than five feet side to side, and must, to my imagination at least, have been sipping what was trying so hard to break the surface film. Something small….a few midges, the odd olive, perhaps.  Difficult to work out, actually.

A shuttlecock CDC olive emerger (#16) was my choice of temptation for the spaded one. He was still sipping. One cast, a second, a third and a fourth, and on the fifth…he ingested, I lifted, the hook set…and then he wasn’t there. He was off. “God, I’m (still) a crap angler”

I wandered off despondently. I mean losing a small fish is disappointing, but losing a meaningful one, promotes tendencies, for some, broaching the suicidal.

But something made me return. Perhaps I felt better offloading to said angler on the other bank, yards upstream in his own little heaven, what I had failed to catch. We all have done that.

So I returned to the same spot and watched and waited. Often fish which have been pricked, disappear and sulk. They dive to a watery deep to seek to recover a dignity, lost. But this chap was obviously hungry, and after an hour, was sipping again. I still waited though.

The angler I hope to become, decided that perhaps the time was right, and cast to where I thought he might be tempted. And after a few casts with the same emerger pattern he was. And, Boy! Was he cross, this time! I mean, hooked twice in one day? Come on!

A strong fish, rushing and plunging downwards, but in early May the strands of streaming ranunculus were a little too short to guarantee harbour, though he still fought gallantly, and after a short while was netted.

He was not the handsomest of fish. Some scarring behind his head, some fin damage, but no ‘stocking’ dye marks, he obviously was a stocked fish, but given his size, must been introduced some years ago, and ‘gone native’ No triploid, he! A real man!

Maybe I can fish a bit.

Maybe I am an angler.

At least until the next disappointment.

What a wonderful roller coaster

I was fishing with my chum Barry (Markham) who lost some, but caught aplenty, after tying on his own Griffith's Gnat, which turned out to be the killer fly of the day. Later he generously said that the fish of the day, and the one which gave him the most pleasure was mine, which he netted for me. Because most of the fish caught that rise-free day, had been through tempting those below, to the surface. Mine was targeted, in true chalkstream fashion.

Maybe I am an angler.