Duncan Wilcox has packed his Land Rover and left the UK for Spain. It didn't take long for him to find some fishing either.

Compared to New Zealand, fly fishing in the UK was a hard yard with most of the water being in private hands of some form (business, fishing syndicate, club or private person) and loads of rules as to the where's, when's, what's & how's of what was fishable water. But Spain makes the UK look like a walk in the park.

As you know the UK, like New Zealand, has a national fishing license so you only need to pay once and license-wise you are pretty much good to go. Spain requires you have a license for every state that you plan to fish in, and in some cases you need a specific area license. So I am now the proud owner of licenses for states of Euskadi (Basque Country), Navarra and Aragón. And my mate Asier has urged me to apply for a ‘sport license’, which you can only get if you can show proof of residence (el padrón) in Hondarribia at the local city hall (el ayuntamiento). 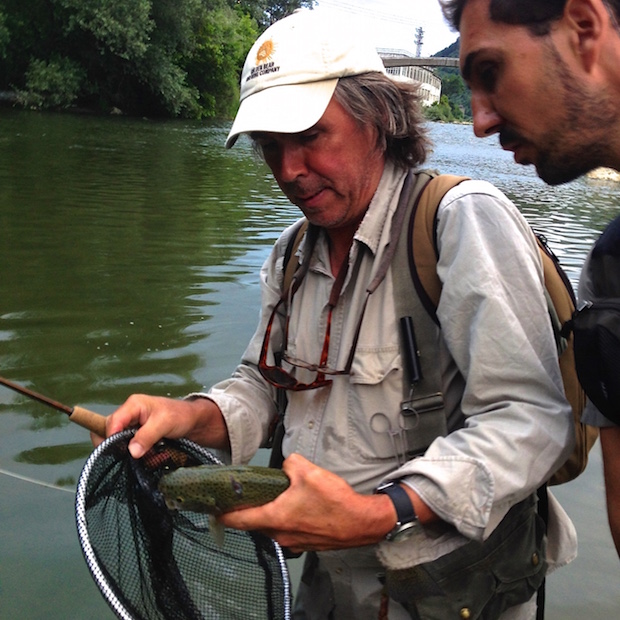 A license is not expensive – about €8 to €15. But you do not want to ignore this bureaucratic necessity as you might in some countries where you would most likely get a slap on the wrist, a scolding and be told to get a license. The Spanish police at all levels are reputed to be seriously tough on violators. You stand a good chance of having all your gear confiscated and possibly your vehicle too and be in for a serious fine (up to €6,000) and be slapped with a criminal record…not a good thing to have when you want to enter a country.

Another factor adding mucho complications to the fishing brew is the many and varied seasonal dates & times you can actually fish. To begin with, the season in many places is very short (just July & August) compared to most countries. When you add in very real restrictions like ‘no fishing on Tuesdays & Thursdays except festival days and religious holidays, and Mondays are reserved for people over 65 and under 18 and nymphs that look like worms are prohibited until August 15th’…well you can spend the bulk of your time holding your rod (so to speak) and just scratching your head.

But I have been most fortunate since arriving in the Basque Country to have been hooked up (pun intended) with Iñaki and Asier (two local fly fishing nuts like me) by my good mate David Brookes (a New Zealander living in the Eden Valley, Australia – go figure). 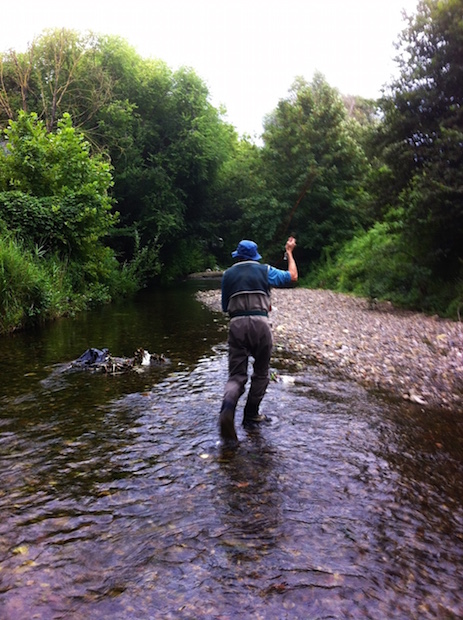 No more than a week after my first meeting with Iñaki, he introduced me to Asier (who also graciously helped me navigate the Basque fishing license process) and they had me on the Oiartz River (names have been changed to protect the innocent), just a stone’s throw from San Sebastián. It flows all the way to the sea and we saw schools of mullet and one massive salmon in the river! It is a curious bit of water in that it flows through a heavily populated area (by normal fly fishing or New Zealand standards) with loads of apartment complexes bordering the river, with crowds of folks riding bikes, running or walking their dogs.  We met & got kitted up in the car park of a huge Alcampo shopping centre, petrol station and industrial complex but the water (as you can see in the pictures) ran clear and they assured me it was chocka with trout. 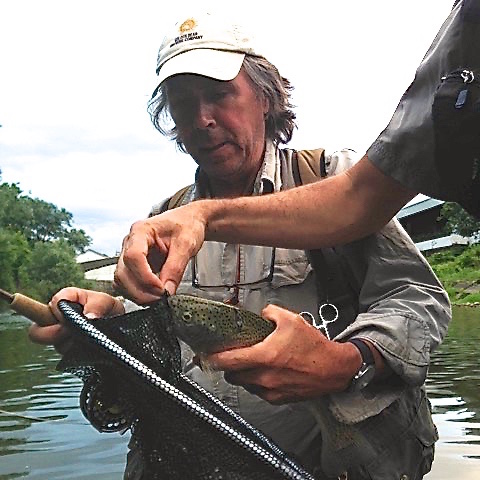 These guys like their tiny (#20-#22) dry flies and avidly fish exclusively for the surface take. I opted for my bog standard Kiwi style rig – dry fly (#18 Parachute Adams) with a nymph dropper (#18 Golden Bead Head Pheasant Tail). We alternated pools and I was the first to hook up with a small brownie but he soon managed to loose my nymph. I lucked out again and copped a great stretch of water just as the rain took on a heavier pour and the nymph once again worked its wonders and a sweet 6-7 inch brown trout made it into Asier’s net. Yippee! My first trucha de España!

We all met again just a few days later at the same Oiartz River and walked a considerable way down stream to a point where there were far more mullet in the water than trout. After an hour and a half and one trout to the net, Asier deep sixed the Oiartz River as it was not fishing well and proposed we hit another river about a half hour away. And 30 minutos later, we were on the banks of the Orina River and could immediately see a dozen trout feeding voraciously on the surface – una problema: they were directly under a heavy canopy of tree foliage. Smart trouts. 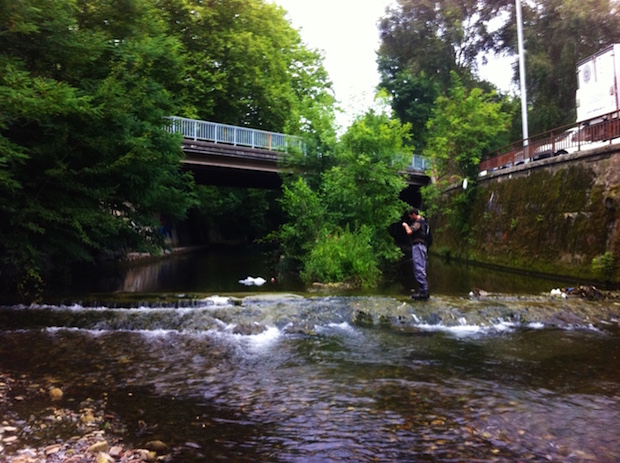 Asier spotted some caddis flies and a cursory check of a river rock confirmed that, so it was a caddis flies all round. Asier, being the gentleman that he is, let Iñaki and I have a good go at the fly snarfing trouts and Iñaki connected first with a real leaper (pics above).

Then I managed to flick a halfway decent cast up under the leafy canopy and at the bottom of the drift the caddis fly was gulped – bingo! Sweet, sweet rainbow trout on the line and fighting just like a rainbow does.

As I said, these guys, like me, are fly fishing nuts and we kept at it well into serious darkness and I managed to make it home a little after 11PM…I think this could be the start of some awesome fun!