Our good friend and ESF contributor Peter Anderson was lucky enough to win an auction lot in the recent Wild Trout Trust auction. He headed down to Dorset to fish the Piddle

The Wild Trout Trust is a wonderful organisation which does a lot to enhance and preserve our trout streams.  Every year they have an auction to raise funds and I have long participated, both as a donor and as a buyer.  It all happens on ebay towards the end of March and this year I had a successful bid for a day on the River Piddle in Dorset, a lot kindly donated by Richard Slocock of Wessex Chalk Streams Ltd and guided by Tony King.  Although Dorset isn’t too far from my Hampshire home and has plenty of day ticket fishing, I confess that I had never before fished in the county so I looked forward to putting that right. 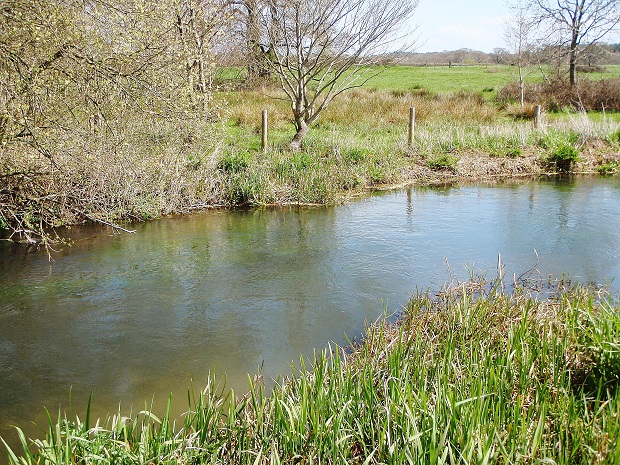 So it was that in late April I made my way down to Tolpuddle to meet up with Richard and Tony. After a coffee and a chat, I followed Tony to the beat. It might have been a bit breezy but it was dry and the sun shone (on and off, admittedly) and Dorset looked a picture. As did the river.   It isn’t a big river (10-15 feet wide) but it was deep and fast flowing.  We had seen some rain earlier in the week and the river carried some colour which was a bit disappointing since it became evident very quickly that we would not be stalking individual fish.  There was plenty of insect life though, grannon and olives, but nothing was rising and this continued, we only saw one rise all day.  That was the end of the plan to fish dry fly and I must say I had mixed feelings about that, my dry fly skills leave a lot to be desired but I was looking forward to the opportunity to practice under Tony’s expert eye.  But nymphing it was to be. Tony suggested klink and dink and that is a method I am very comfortable with. I had my pretty standard set up, a hi-viz parachute adams and 2 feet below that a size 18 hare’s ear nymph tied with a 2mm tungsten bead to get it down to the fish (I use black or copper beads in preference to gold which I find a bit bright). 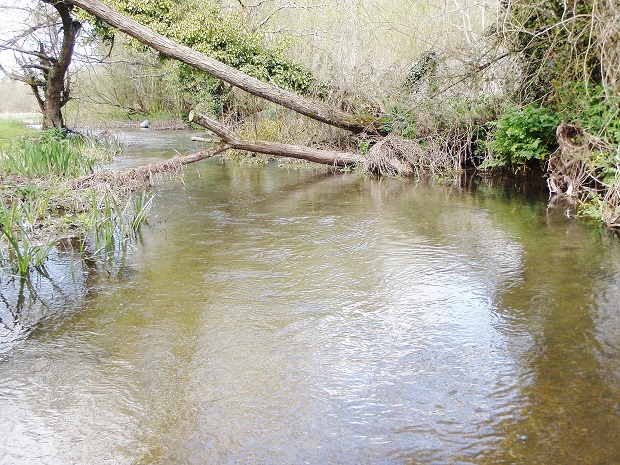 We worked our way upstream and the klink steadfastly refused to dink.  After a while, though, the dry dipped away and my first thought was weed so I was happily surprised when I lifted into a fish. Well, calling it a fish might be stretching it a bit, it might have made 4 inches.  Still, that was my Dorset duck broken.

We continued to work our way upstream with Tony pointing out what are usually “sure thing” pools and indeed I have rarely fished a river that looked so fishy. The trout hadn’t read the books though and it was hard work.  I fished mostly from the bank but a shallow run shielded by shrubs looked promising and I slipped into the water. This was very much roll casting territory and I moved slowly and carefully upstream……and a fish took the dry!  It wasn’t big, 8” or so, but it was beautiful and very welcome.

We continued to work upstream and spotted a very nice fish lying under the trailing braches of a tree on the far bank. Not an easy cast over my wrong shoulder to get the angle. Happily the cast was OK, in fact it was so good I didn’t care if the fish took or not, it isn’t often I execute a difficult cast well! The fish wasn’t interested. I asked Tony to have a go and admired a difficult cast effortlessly performed. The fish still wasn’t interested though. That was pretty well the only fish we spotted all day. But the temperature was rising and although nothing was rising, they were taking the nymph with some regularity now and it was great fun. To cap it all, at the end of the day a fish came up and followed the dry for a yard or so before taking it, a second later he was on….and 5 seconds later he was off!  Not a big fish but very exciting stuff. 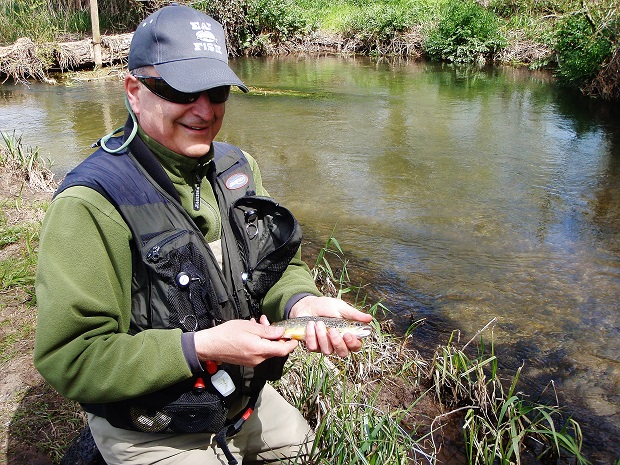 This was a cracking day.  I thoroughly enjoyed myself and the WTT benefitted so thanks to them, to Tony and to Richard Slocomb for making it all possible.

Wessex Fly Fishing is at http://goflyfishing.co.uk/

Tony King can be contacted via http://www.tonykingfishing.co.uk/

We at ESF are big fans of the work the Wild Trout Trust is doing. Find out more HERE