Want a streamer pattern that is different? Take a look at this one from Nick Thomas and also the way he is fishing it. As always, he comes at it from a different angle.

‘If it ain’t chartreuse, then it ain’t no use.’

It ain’t chartreuse, but this one certainly works. I think debating what colour fly a hungry predator is likely to take in murky water is as much point as worrying whether an angry Rottweiler in a dark alley is going to be in any way influenced by the colour of your trousers. Unless they are salmon pink corduroy of course; then you are definitely going to get chewed and get sniggered at in A&E. Big bright chartreuse flies work because aggressive fish can see them, but what if you are fishing clear water for spooky fish on light tackle?

Making a good baitfish imitation to be cast on an 8wt or 9wt rod can be fairly simple. You take a big hook, lash on tons of different materials and then trim it back to the shape you want. Bucktail, trailing hackles, marabou and craft fur all provide length and bulk, but the more material you add, the more water is held in the fly. Sooner or later you are trying to cast a sopping wet drowned budgie. Chucking such things about is manageable, if tiring and a bit nerve-wracking, on a heavy rod but patterns for large baitfish imitations don’t scale down well for small flies and light rods. There’s just too much bulk and mass of fibres to cast and fish effectively.

When I designed this fly I wanted to provide bulk without weight to give a decent sized baitfish imitation that could cast easily and safely on lighter 3-5wt rods. The trick is to produce a hollow ethereal fly that has the required profile viewed from the side and behind without having solid heavy materials all the way through. This is achieved by using plastic bead chain eyes and stripped organza ribbon to push the body fibres away from the hook shank creating the desired tapered drop shape. The red organza wraps give the impression of flaring gills and hold the EP fibres of the back and belly away from the shank making the fly pulse on the retrieve. The tying method is simple and quick with folded fibres making it easy to form a neat finish at the head and a giving a very durable fly. The general design of the fly lends itself to many variations according to the baitfish you want to imitate. I tie them with different coloured eyes, generally using black or pearl plastic bead chain. Varying the colours of the EP fibres, with white, cream or yellow for the belly and brown, green and olive for the back, gives a range of baitfish imitations suitable for targeting perch, chub and the odd big trout. The dressing below is my standard one; tied on a strong Tiemco size 8 hook it gives a fly which is around 3 inches long and casts well on 4wt or 5wt rods.

The fly can be tied on smaller size 10 or 12 hooks to make flies 1-2 inches long to match the baitfish and fry in your rivers and lakes and which can be cast on 3-5wt rods. When making small flies cut a proportionally narrower strip of organza for the gills. The tying method can also be scaled up to make larger baitfish imitations on bigger hooks for pike or saltwater use; use 25mm organza ribbon for the gills and cut to your chosen width. 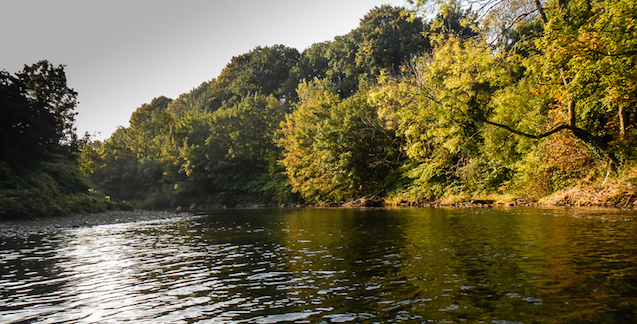 Don't think that you can only fish this pattern on the end of the leader in conventional streamer style. I've found it very useful in small sizes on a short dropper on a nymphing rig with a heavy tungsten bead fly on the point. On a braid touch leader (see ESF #47) the unweighted baitfish swims and flutters in the current while the heavy nymph is used to steer the fly under the rod tip into deep holes and along the edge of fast runs where a predator may be waiting to snatch prey. A bit like drop-shotting but with a fly rod instead of a spinning rod. This method has proved to very effective in catching some big chub from the deep channels on my home stretch of the Taff.

For fishing the deepest runs I tie some weighted versions incorporating a brass or tungsten bead at the back of the shank. Placing the bead here keeps the fly swimming level as you steer it through the current and enhances the flaring of the organza gills. 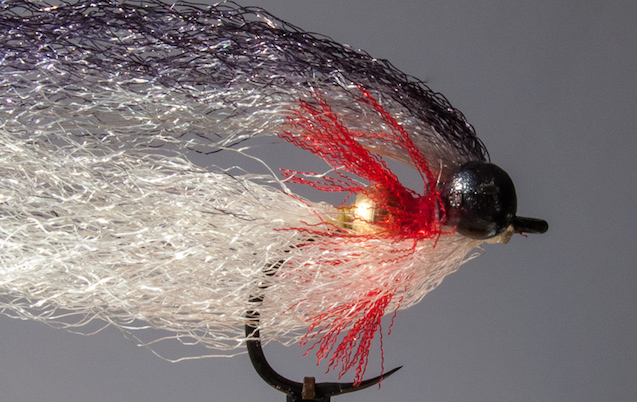 So if casting a dead parrot makes your arm ache and scares the hell out of you, try one of these. Oh, and if you really, really want to tie a chartreuse version, I’ll forgive you.