I have a book on the shelf that I picked up at an auction at my fly fishing club which is called ‘Fishing The Welsh Borderlands’ by Roger S D Smith. I have been  this over the past few months and it has ignited my interest in the rivers, streams and brooks of this area so much so that I was determined to experience them for myself and where else but The Wye and Usk Foundation’s passport.

Within a couple of minutes of putting down the phone I received the e-mail from WUF confirming that I’d booked a day’s wild stream fishing:

It may be worth noting that if you were to book x 2 rods which is the maximum for the beat, the booking fee would remain the same at £4.00 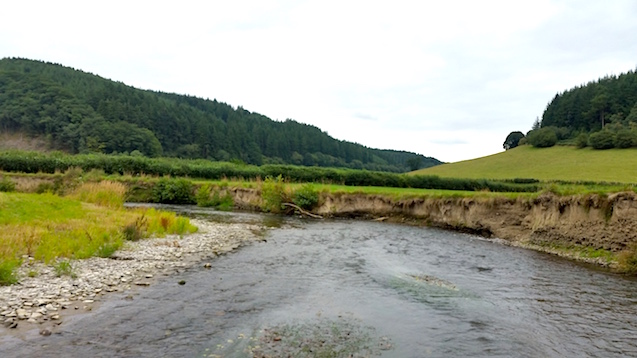 The e-mail informed me that this was also my ticket and that I needed to print it off, giving me authorisation to fish the beat from dawn until one hour after sunset.

I had loaded the boot of my car the previous night with the small collection of river fishing tackle that I owned and as I normally fish the Midlands reservoirs and stillwaters I’d also thrown in a couple of recent fishing magazines with articles on river fishing that I thought may come in handy to have a read as I took a brief respite or had lunch on the river bank. I then headed off to the M42 picking up the M5 to junction 7 Worcester turnoff leaving the Midlands behind and then finally the A44 to Leominster in Herefordshire.

If you are heading this way from the Midlands and like myself you prefer to eat an hour after you’ve woken up I discovered a lovely café in Laylock’s Garden Centre on the A44 that serves good wholesome food,  fit for any would-be angler and at very reasonable prices.

With your confirmation e-mail also comes a PDF file that gives directions to finding the beat. I did laugh though when it said ‘a mile or two out of town.’ Now for somebody like me who is unfamiliar with the area a lot can happen between one and two miles (note to The Wye & Usk Foundation can you please use specifics, it will make the beats far easier to find?) or I could invest in a  sat nav. 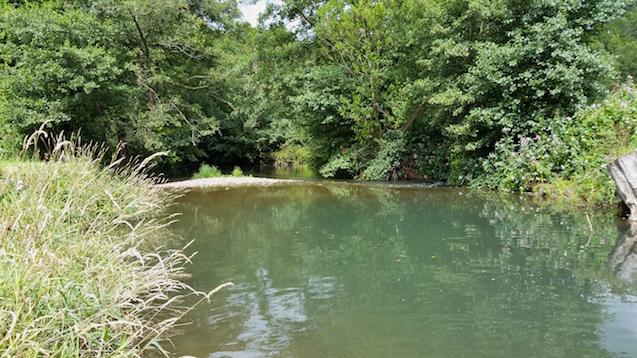 When I eventually found the beat I parked my car over the bridge close to the Sned Wood sign as advised on the map and began tackling up. I was soon joined by a  lady and her over exuberant Labrador.  She informed me that she was renting the holiday cottage with her husband and grandchildren making references to the beauty of the surrounding countryside and that a guy who’d been here a few days earlier had caught two trout and a number of grayling. She then wished me luck and bid me farewell as she walked back up the forestry track back to the holiday cottage with the bounding animal in tow.

After my 5 weight rod and a 3lb leader were set up I made what I believed to be a calculated novice's decision (if such a thing exists? )  and tied on a size 16 small black gnat as I saw plenty of small black flies around me and ventured back over the small bridge (which it transpires was built in 1844) and over the stile and headed down towards the water. 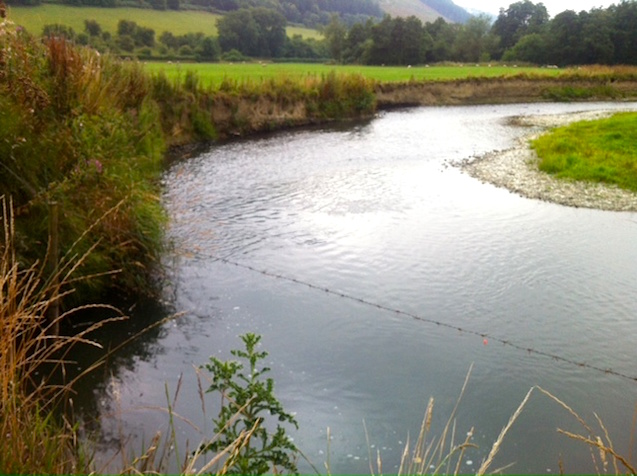 I decided to walk upstream for the first part of my day and so set off up the river in pursuit of my quarry surrounded by some awe-inspiring countryside.

I quickly learned that tranquillity comes at a price as this really was wild fishing and at times it was tricky work to navigate the river,  fences,  embankments and the deep pools in order to cast a fly. Take it from me, some of the pools are decidedly deeper than they look so use the bank as much as possible and take no chances.

As I waded I cast the fly into what I considered to be holes that surely held fish. After an hour and a half of obstacles and casting and no fish I decided it was time for a coffee and to re-think my plan of action as I was still fishless and had not seen much in the way of trout.

However, as I sat I saw a fish rise to a fly less than two meters from where I sat and before long I was back in the river and casting probably too ferociously in its direction.

I watched as it rose a number of occasions and changed my fly to a size 16 Griffith's gnat but without success.  I must have spent over 40 minutes in the one pool that had a typical small eddy underneath a large overhanging tree that I thought must be a larger trout's lie.

It was only after the trout stopped rising that I realised I must have spooked it and so moved on down river with at least the satisfaction gained from knowing that:

On my way I began to spot more rises but decided to rein in my enthusiasm and instead of immediately casting at them I sat on the bank and watched as the water in the pool I was sitting by came alive with sipping fish. I also spotted fishing line and flies wrapped over some barbed wire on a fence that crossed the pool and so I had obviously come upon a known spot to both fish and angler. I make no apologies if I have written this and let out somebody's secret fishing place but this was a day ticket water. 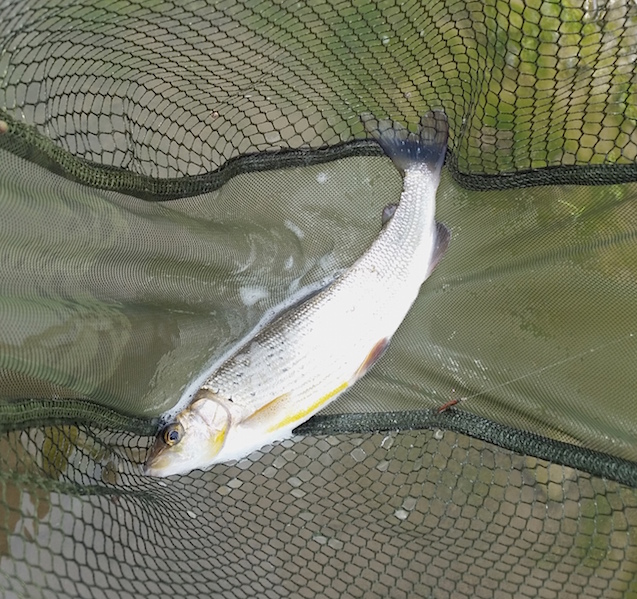 It wasn’t long before my efforts were rewarded with my first fish of the day and what a welcome sight it was. It was possibly the smallest grayling ever but ‘hey ho’ it put a smile on my face and re-ignited my enthusiasm to push on in the hope of more fish and fingers crossed a wild brown trout.

Well did I catch more? I will leave you to judge that but I will sign off with: if it's  wild fishing in tranquil surroundings you are looking for then I’d recommend Leypole as aside from afore mentioned lady and a few cars that used the road that crossed the bridge I did not see another person for the next seven hours, I waded this lovely river that begins life in the Welsh borders in Llangynllo, Powys for six hours amongst stunning scenery and wildlife you just don’t get to experience living in The Midlands.

More from the Wye and Usk Foundation HERE