Nick Thomas takes a look at the Wychwood Drift rod

Have you ever thought that a few more inches would make you a better angler?

For almost all my fishing through the spring and summer I'm very happy with 8 foot 6 inches of Loop Cross S1 for dry fly fishing or fishing a duo. It casts exactly where I want, every time, without me really thinking about it. Familiarity and muscle memory make it a virtual extension of my arm. However, come late autumn and winter when river levels rise, something a wee bit longer is needed for fishing heavy nymphs on a braid or nymphing line.

For the past few years my Greys Streamflex Plus 3wt has served me well and with the extension section fitted to give a 10ft rod, I’ve never really felt lacking in length. It’s suffered a lot of abuse, the rings are getting a bit worn and the butt cap dropped off somewhere in mid-stream, so I knew I was going to have to replace it sometime. The final straw came in the shape of a large barbel hooked while grayling fishing. I was doing all right until I got the fish in close and then, with the rod hooped over as I tried to steer the fish to the edge of the current, the extension section broke. It didn’t just break, it exploded. I was left holding the butt section with the rest of the rod flopping over tethered between the reel and the fish. There was no sign of any fragments of the missing piece, so I grabbed the tip section, jammed it into the butt and eventually landed the fish. The remaining rod was fine and would work as designed as a dry fly rod, but I had a better one and I didn’t have a long nymphing rod anymore. Time for a new one.

I made a list of suitable candidates. I’d decided to go for a 11ft 3wt, and since I have an aversion to rods with wood in the reel seat, it was a fairly short list. Call me picky, but I’ve never seen the sense in rod makers using high-tech carbon blanks coupled with specialist alloys for the rings and reel seat, all of which are impervious to water damage and then sticking in a chunky of fancy wood at the end of the rod. It’s the same with cars; I never understood why designers or owners think that the addition of some high gloss burr walnut enhances the interior of a car. Wood is for furniture, not cars or fly rods. OK, rant over, let’s move on.

There were three options on the short list; the Wychwood Drift at £150, the Redington Hydrogen at £250 and the Scierra Surge at £300. If Loop still made their Göran Andersson signature 11ft 3wt, I might have given it some serious thought, although getting it approved by the domestic expenditure committee would have taken some hard work. I bought the Drift. 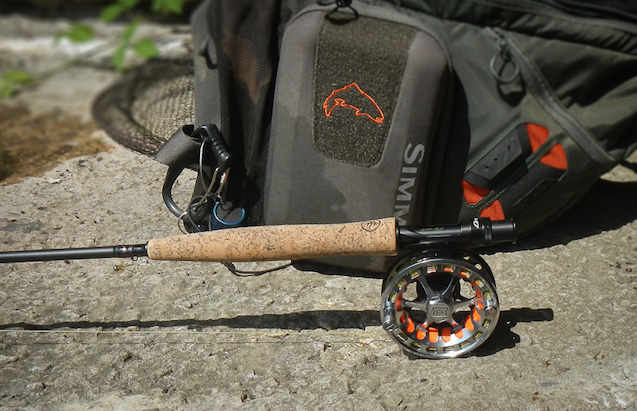 First impressions on taking it out of the tube and bag were good. The rod is matt black with the only shiny bits being the whipping on the rings. I like that. There’s not a lot of point in having a rod for stealthy close range fishing that flashes like a beacon every time you wave it around. The rod rings are also black, single foot and small, which saves weight on a long rod. 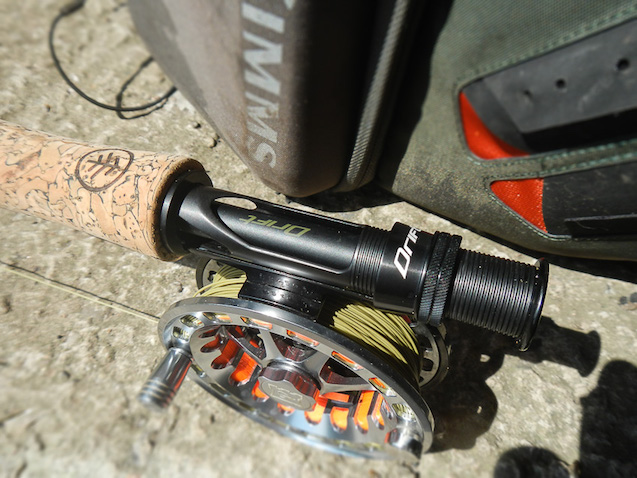 Wychwood rather coyly describe the handle as featuring a ‘camo’ look to match the stealthy design of the rod. I suspect that this is marketing speak for ‘we couldn’t put a high-grade cork handle on a rod at this price, so we’ve used a composite’. Having said that, it’s well shaped, slim and comfortable to hold; it feels like a good grade cork handle. With my eyes shut I can't tell the difference.

The black anodised skeleton reel seat looks a little flimsy with the rod blank exposed in the centre. However, while it doesn’t look quite as good or as strong as the one on my Loop S1, it's a nice-looking minimalist bit of industrial design and holds the reel securely despite not having a locking nut.

The first time I used the rod it took a bit of getting used to. With a very light Hardy reel loaded with a nymphing line the rod was balancing at the front of the handle and after a couple of months of fishing a much shorter and lighter rod, I was aware of some tension in my wrist. After an hour or so of lobbing nymphs however, I’d got used to it and by the end of the day I was fishing drifts with the rod out at arm’s length without thinking too much about it. After a couple of sessions using the rod I swapped to using a slightly larger and heavier Loop Opti reel which improved the balance point.

The action of the blank is good. The tip is sensitive enough to transmit the tapping of a tungsten nymph trundling along the river bed and the rod flexes well through the upper half to propel a pair of nymphs a good distance. The progressive action through the blank allows smaller fish to give a decent account of themselves and there’s some decent power towards the butt to cope with something larger.

That first time out with the rod I fished one of my favourite grayling runs where the Taff flows around a large bend forming a deep channel on the far side with patches of gravel among large boulders. The grayling hold station in these pockets on the edge of the foam line in water five to six feet deep, so fishing a short line and steering a heavy nymph with a small unweighted nymph or spider on a dropper is the best way to tackle this stretch of water. The extra length of the Drift certainly allowed me to have more control of my nymphs that I would have had on the same run with my old 10ft nymphing rod.

I’d caught a couple of grayling when the line went taught and the rod hooped over from the pull of something large which was boring deep and heading for the snags along the far bank. The fish was putting up a strong fight, but the rod was coping well. I really didn’t know what was on the other end. One minute it felt like a huge grayling slewing sideways across the current, the next like a decent trout running fast downstream, then the heavy slugging weight of a chub or barbel. It was a chub, and a pretty decent one at that. 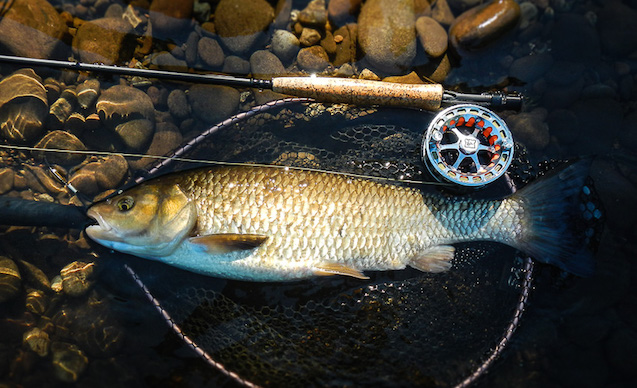 Although I bought the rod for fishing in the winter to let me reach out a bit further when high water limits wading, some periods of heavy rain and raised river levels through the summer saw me using the rod more than I expected. It acquitted itself very well. After experimenting with a few different setups, I settled on using a Rio Euro Nymph line with a Hends 60cm braided tapered leader to act as indicator and tippet attachment point. The extra length of the rod allows me to throw a much longer length of nymph line than I could with my old 10-foot rod and to hold all the line off the water to give a natural drift.

So, did I make the right decision in buying the rod? Well, on that first day I used it I met a chap who had travelled over from Bristol to fish the Taff. He was using a much more expensive nymphing rod. We swapped rods. We waggled them about. We held them side by side in each hand. We couldn’t tell the difference. Enough said.