Ben Showers revisits fly fishing after a long lay off

I haven't fished for about 20 years - university, work, girlfriends, marriage and kids. You know the story. But I recently started fly fishing and the bugs got me.

While I was in my teens and early twenties I fished a lot. I grew up by the coast so I did a lot of sea fishing and did quite a bit of competition fishing as well. I worked in a tackle shop most weekends and holidays from the age of 16, so I was surrounded by fishing.

But since going to university and starting a family, I hadn't really picked up a rod.

However, as I approached my 40th birthday I had suggested to my dad and brother - both keen fishermen – that I’d like to go away for a few days on a fly fishing trip.

I was hitting a 'big' birthday and it seemed right to go back to something I had enjoyed so much. Fly fishing seemed the right choice: my dad is a keen fly fisherman, it feels more mature and it gives me the chance to try tying flies as well!

So, after a little research I decided we should head for North Wales. We headed for Cadir Idris, the second largest peak in Snowdonia National Park. We were staying at Dolffanog Fawr hotel, which sits at the foot of Cadir Idris and at the edge of Tal - Y - Llyn lake.

We had two nights booked at the guest house (Sunday and Monday) and it turned out this was the perfect place for us to stay. 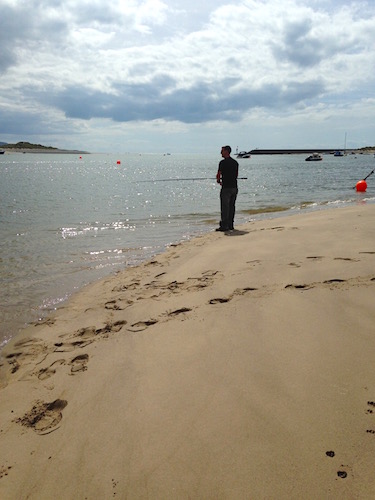 We fished with lures and sandeels, but while the weather was lovely, the fishing was quiet. After a couple of hours of not catching anything we decided to head to the hotel to check in.

On the way we decided to check out Creggenan Lakes, up on Cadir Idris and do a little reconnaissance for possible fishing the following day. We spent a bit of time walking around the lakes and watching the evening rise, and it was agreed (without any hesitation) that we should spend the following day fishing there.

The lakes are on the slopes of Cader Idris, high up the mountain looking back down on Barmouth estuary. It's a truly stunning spot.

There are two natural lakes. The large lake is 27 acres with wild brown trout only. The smaller lake is 13 acres, stocked with blue and rainbow trout, plus a good head of wild brownies.

The following morning, after some advice from Alex, our host at the hotel, we set off around 10am to catch the (mayfly) hatch and make the most of the day.

We decided on the small lake to increase our chances of catching. Robert (my brother) and I fished behind the boathouse while Dad fished the long bank.

We began by fishing from the bank, but it became clear that you had to get a few feet further out to get to the edge of a drop off. Despite this Dad caught first - a lovely rainbow around a pound.

After getting his waders Rob had instant success and had already landed four fish before I could get my wellies on (I don't have waders, yet!). I was fishing a goldhead olive damsel and Rob fished a bright lure – I have no idea what it was, but all Rob’s flies seemed to be large, neon lures! 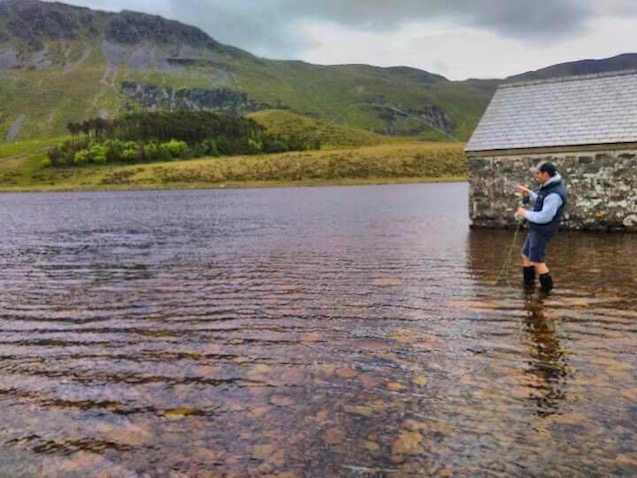 After getting in the water I then had a succession of fish, all around the 1 - 2 pound mark. They were all beautiful rainbows that fought hard and did some impressive leaping out of the water.

After about four fish on the olive damsel I decided to try taking some on the surface. I switched to a dry mayfly pattern. This provided a further four fish and some spectacular sport.

Watching the trout take the fly from the surface was a real highlight.

We continued fishing until around 5-ish. The final tally for day one was Rob 14, Dad three (all from the bank), me eight. My olive damsel had taken quite a beating too. 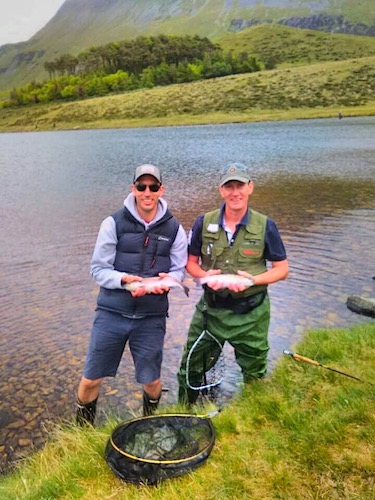 After dinner that evening by the banks of Tal - Y - Llyn lake, we decided the following day we'd fish Llyn Clywedog before heading home and leaving the fishing behind us (for the time being at least).

We'd heard very good things about Clywedog and our host Alex had suggested over breakfast that it was a great place to fish and the scenery was fantastic.

Alex also mentioned there was a nesting osprey by the lake, so that added some additional interest as well. We didn’t need any more convincing so we packed, loaded up the cars and headed off for our final day's fishing

On our way to Clywedog reservoir, we stopped off at Machynlleth, a small market town not far from where we were staying.

It's the home of Coch-Y-Bonddu Books, arguably the best fishing and field sports bookshop in the UK. It's a place you could easily lose a few hours in browsing through the books. As it happened I got a couple of books to read once I got home!

We left Machynlleth and headed straight for Clywedog, driving at altitude along stunning mountain roads.

Upon arriving we went straight to the lodge and got our tickets and some friendly advice. We opted to fish the ‘popular bank’ as we weren’t going to hire boats.

We headed back along the road and found our spot. We got our gear ready as quickly as possible and got down onto the bank.

We had a lovely spot, with the wind largely behind us and while it was fairly bright, there was some cloud cover. 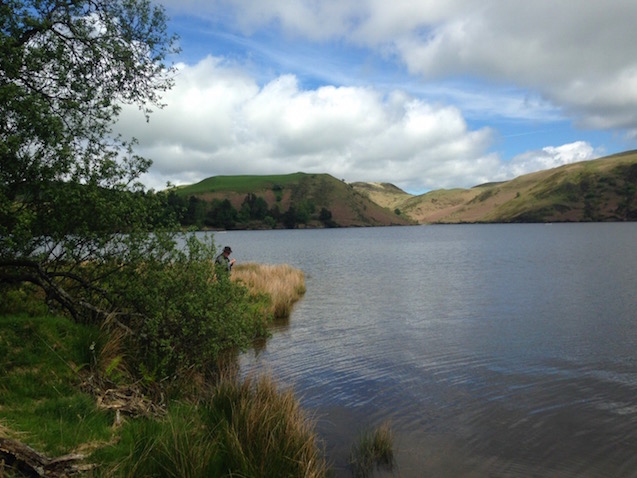 However, fishing was tough. The sun was strong, and although it got cloudier, the first few hours were bright sunshine.

After a few hours fishing nymphs and lures Dad and Rob moved around to a bit of headland.

All the fish were caught on white and green Baby Doll style lures. 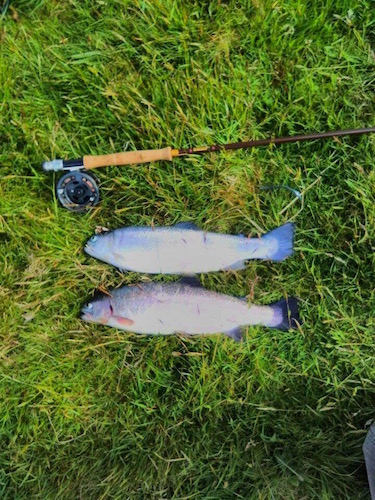 I, unfortunately, didn’t catch anything. I didn’t even get a bite!

However, just as we were packing up to leave, we did get a view of the resident nesting osprey, as it glided across the water.

Despite the lack of fish on my part, the osprey almost made up for it. Almost.

It was also just the beginning of my journey back to fishing, and if nothing else the holiday reignited my passion for fly fishing and I can’t wait for next year when we agreed the three of us would go away again.