Colin Duffy shares a special moment with us

Guido sat down in the grass and put his head in his hands.

The salmon had chased my fly, put it in its mouth, shaken its head from side to side and spat it out. I hadn’t seen or felt a thing.

I’d entered this pool over an hour ago and was now about 25 metres from its lip as it crashed into the falls below. Guido was four meters above me hiding in a bush. He was looking into a pool containing a group of four fresh run grilse averaging 6lbs or so. 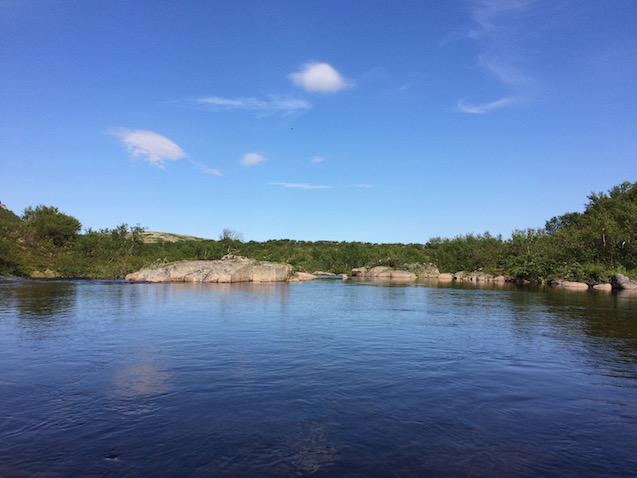 I was in water just three inches below the top of my waders getting my elbows wet and casting at the limit of my range, swinging my fly around and in front of their noses – I hoped. I couldn’t see the fish but Guido could and his excitement and frustration was reaching dangerous proportions. He was the spotter and I was his incompetent gunner.

Another by now standard instruction set went along these lines.

These episodes were interrupted intermittently by removing my fly from the tree that had reached into the river almost perfectly in line with any back-caster attempting to do what I was now doing.

“Let’s try this fly” was another frequently spoken phrase. Almost every fly had had a follow but none had really meant it. Strip slower, strip faster, new fly, different angle. Nothing.

Then it started to rain and the disturbance on the surface made it impossible for Guido to see the fish. I carried on anyway and on my second cast felt a fish take. It was immediately aerial and headed off downstream over the falls. I couldn’t follow without filling up my waders so had to listen to my real screaming in a very satisfactory way.

I’m a trout fisher so I’ve never heard this sound before – it elicited a different kind of shout from Guido my guideo; “don’t touch that f*****g reel!”. So I didn’t, I just watched my 9’6”, #7 rod bend just like in the adverts under the weight of a running fish, and an increasing weight of line and water.

Then – ping – the rod straightened and I staggered backwards into the water with the recoil of the parting line. All that effort and gone in a blink …..

But then something rather different from the norm of losing a fish happened, Guido ran down the bank and leapt into the river, crashing and stumbling down it, grabbing at something. It was the fly line and the fish was still attached to it. He waded back to the bank pulling in line and fish as he went, finally beaching the poor fish onto the shingle. 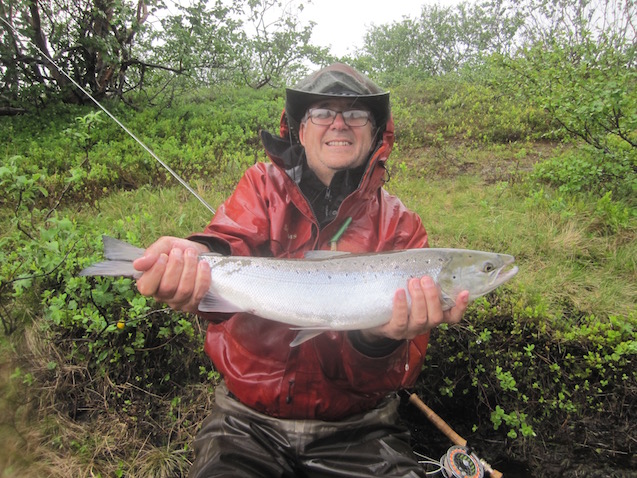 It took me a while to get out of the water and down to the fish, but Guido was grinning holding the fish in the current for long enough for the obligatory photo. And here it is, my very first Atlantic salmon. We agreed that it was a 50:50 fish, but I’m claiming it as my own.

The post mortem revealed that the fly line had parted at the backing – the knot had failed. No names no pack drill, but that had been a cassette, backing and line deal from a well-known supplier who tied it on themselves…. Moral, check every knot.

So my first day’s salmon fishing ended in several memorable ways. It’s going to be hard to follow it.