This fly evolved on a windy and wet winter afternoon. I’d been driven off the river by the cold and dreich drizzle. After several cups of hot coffee and having re-established contact with my frozen feet, I was sitting at the tying bench dreaming of warmer weather. Specifically, a pleasant early misty morning on a carp lake. 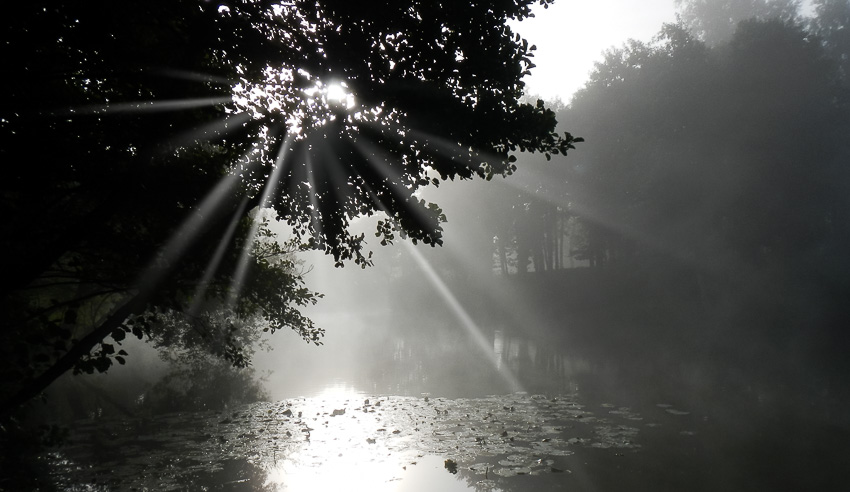 I often find that when I sit at the tying bench I’m making flies for a different season. Quick sessions are dedicated to just filling up spaces in my boxes where I’ve lost flies. Longer sessions which involve experimenting with new patterns are frequently time shifted. Summer flies are tied in the depth of winter and heavy winter nymphs at the height of summer. I guess it’s a human trait always to be wishing for what we haven’t got, but the sense of anticipation of testing a new pattern is always heightened by looking forward to a different type of fishing as the seasons change. On this occasion after messing about a bit with some craft foam, ribbon, some fibres left over from tying salt water bait fish patterns and a packet of unused booby eyes, the Stalking Dragon was hatched. 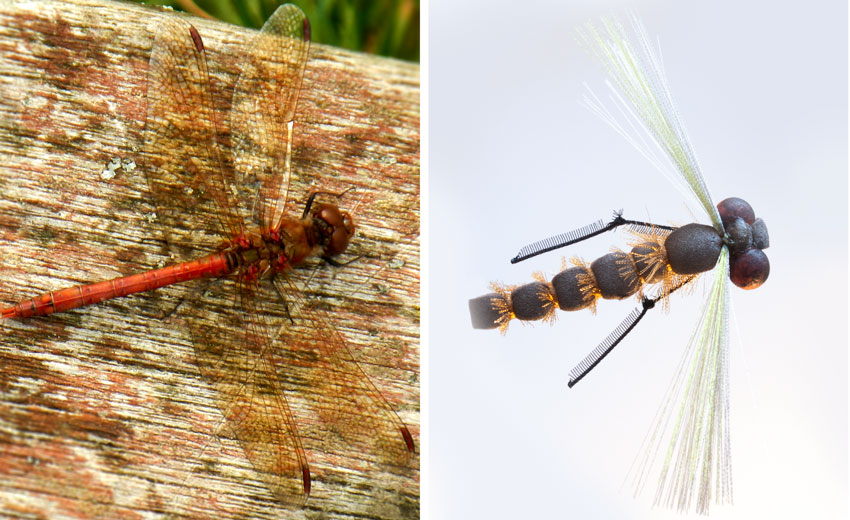 It’s a big fly, but then so are the real ones. The one in the photo above has a 3-inch wing span and looks a bit like a kid’s model aeroplane when it’s hanging from the leader. It’s not designed for casting. It’s a stalking bug, but not in the conventional sense of a small heavily weighted fly for stalking stillwater trout in clear lakes. Many of the lakes I fish for carp don’t lend themselves to casting a fly any distance, with the surrounding trees and bushes precluding any decent back cast. It made sense to me to design a fly specifically for stalking carp and other species cruising the margins without casting. Sneaking among the bushes, crouching under cover and stealthily lowering the fly onto the water is the order of the day with this one.

Making the extended foam body is straightforward using a large darning needle held in your vice. The trick is to use a slippery thread and not to make the initial wraps used to attach the thread too tight. This will allow you to slide the body off the needle when the body is ready to be transferred to the hook. 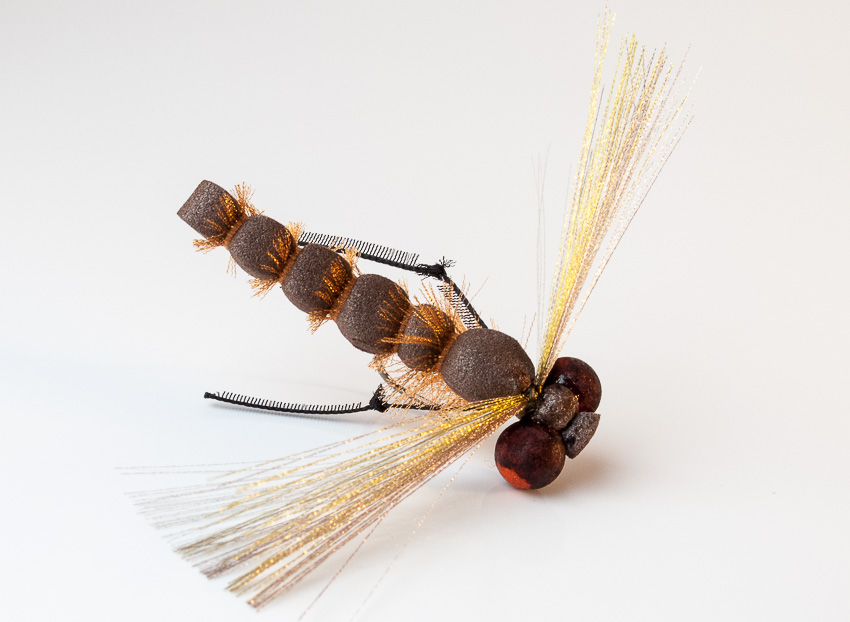 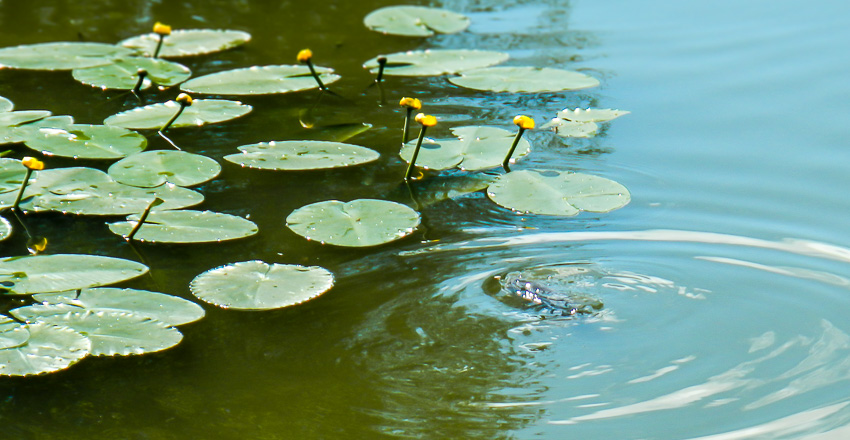 My favourite way of fishing the Stalking Dragon is to lower it onto a patch of lily pads, wait for a fish to mooch along and then twitch the fly off the leaves onto the water. This often induces a solid swirling take followed by a sharply bent rod and a screaming reel as the fish attempts to regain the safety of the lilies. Strong tippet is the order of the day; no need for subtlety here, the fish will never see the leader, so 10lb or heavier is appropriate. Make sure you tie the fly on a good strong hook; holding a big carp at short range puts a lot of strain on a hook and standard trout fly hooks are not usually up to the job. 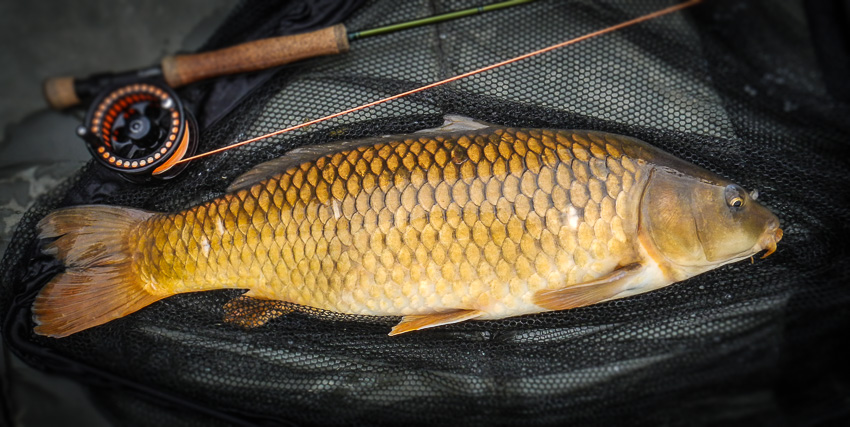 While this is primarily a carp fly, I’ve also caught several other species including bream, roach and perch on it. The prospect of a large juicy meal seems to induce fish that you would not normally expect to take such an offering to manage to get their small mouths around a huge fly. Some of the roach were only a little bigger than the fly itself. 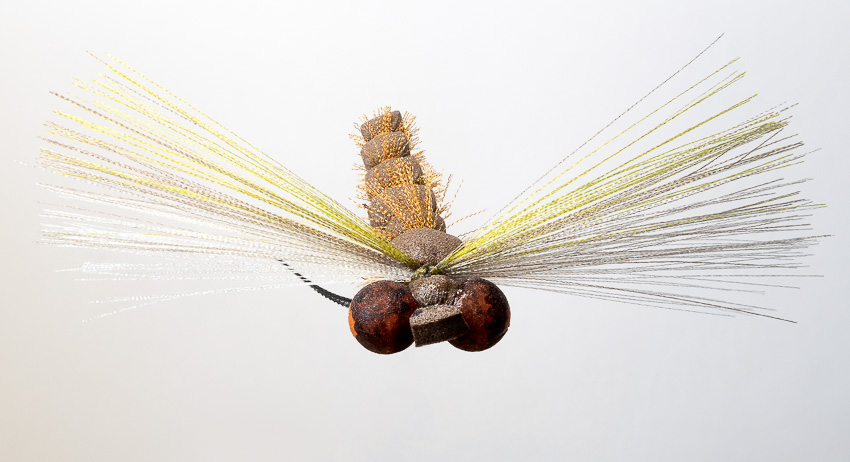