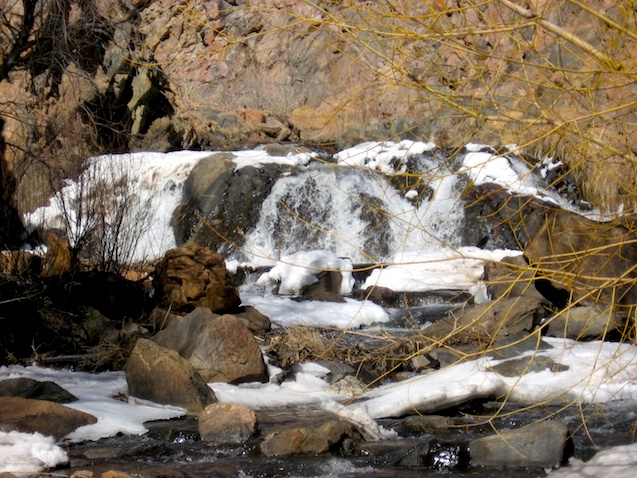 In early April I had a half day trip to the Bear Creek Canyon where I found the river choked with ice in whole sections where the river ran east and west and were in shadows from the 12,000 foot Rocky Mountain foothills all day. The north-south stretches, only 30 minutes drive from downtown Denver benefited from the ample sunshine we were having at the time which freed up the ice and provided a little bit of action from hungry fish. Three of us were able to catch nothing, but each of us had a strike so success. Eric actually had a fight with one that eventually tore his whole rig, of a San Juan Worm and an egg off. Sounded like a fish story to me, but the smile on his face and enthusiastic recreation of the event finally convinced me.

Mark, a newcomer to the craft had a quick hit on a #16 Royal Wulff when swung through a promising looking bend. I saw the hit with my own eyes so I know there’s no fabrication here, besides Mark is a lawyer and yet is known to be a true shooter.

I also had a nice hit on a blue winged olive #20 dry fly, but being true to my normal form I had fallen asleep at the rod having cast 300 times with a 7 foot four weight fast action bamboo that day without any action. To be fair my mind had gone elsewhere.

A month later another trip to the same place produced a couple of fish. Unfortunately they were so small that they are lost in the granularity of a digital picture. 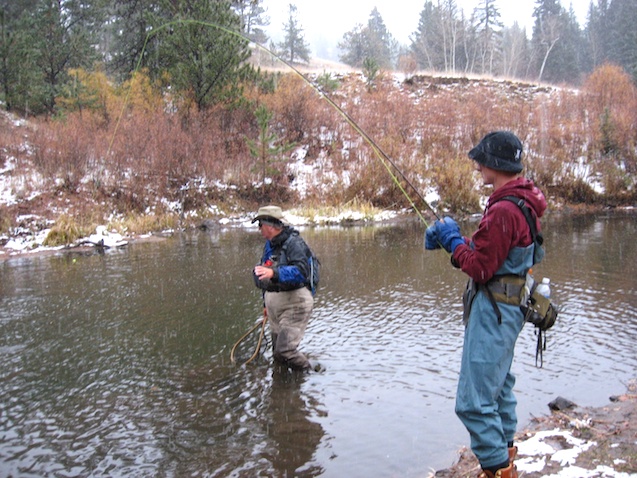 I was treated to a trip by local businessman to private water in South Park on the Tarryall River on April 25. This date has been scheduled for months so there were no options regarding the six inches of snow they received overnight. Undaunted we proceeded into the mountains in our four-wheel-drive vehicles determined to fish no matter what. The sun was just coming up as we entered South Park descending from the 11,000 foot Kenosha pass to Jefferson City at about 9500 feet. I just happened to look at the thermometer indicating the outside temperature as registered on the dash of the pickup we were in. At first I thought something had gone wrong with the thermometer or Eric’s readout device. A few well-placed thumps with a finger on the front of the dial brought no changes. It was 3° outside, 3°F. This is very disheartening. After years of guiding all year long I had established very firmly in my mind and with my clients that I would not fish if the temperature was ever below 4°F. Now that's a standard I have to live by, so what could I do? I had to wait until the sun warmed the area up to be above 4°F.

12 of us stood shivering in the freezing air in a barnyard just up the river about 20 miles, not smart enough to get into the lean-to 30 feet away. Finally someone had the brains to say why don't we move and stand in that lean-to where the north wall will block the bitter wind. What a great idea that was, it even had fresh straw on the floor, sick, dirt to stand on instead of ice.

Had a short introduction to the property by one of the guides who runs the property on the subject of property boundaries, density of fishmen allowed on each of the sections and flies that had been working recently. Then we had a short entomology class where we were given hints regarding identification of midges, mayflies, caddis flies, and stoneflies and how to rig them for today. Meanwhile it warmed up to 17°F. A true heat wave. Following a hearty brunch, and more importantly another hour of warming, we set off in 30°F temperatures to our different areas, we had six miles of the river to spread out in. 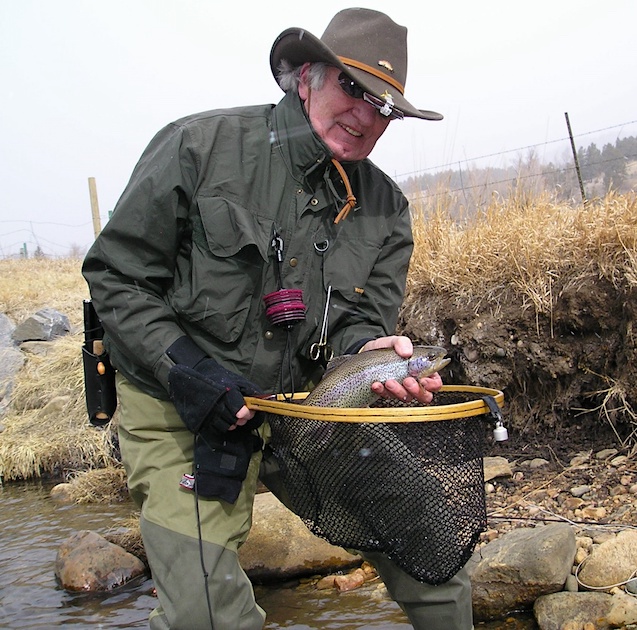 Fortunately I had had the opportunity in my guiding life to fish all these properties so I knew them quite well and quickly ditched the suggested flies and rigged up the people who are with me as friends, not guiding, with the right stuff in a change from catching nothing to an afternoon of catching fish in the 12 inch to 14 inch range +1 19 inch rainbow landed by my friend Eric.

After ditching the streamer idea we used standard nymph rig of strike indicator, lead weight, attractor fly (egg), and San Juan worm. Couple this with the technique of dead drift and bouncing off the bottom and immediately got better results. I think I caught a fish on the 3rd or 4th cast through a likely spot. Everyone else started catching fish immediately after I rigged them up differently. Just saying, must use the right stuff.

The right place is also important to stress. Fish were located feeding in quickly moving water behind a drop-off of about one foot that angled from my feet upstream at about a 45° angle to the other side where the river made a gentle right turn. Fish were congregated in the slack water about three feet downstream from the start of the drop-off. I could not see them because of the turgid water, but I knew they would be there. Guess what …

In all a wonderful day and it melted all of the snow before we were done and had to take off one of my outer layers of clothing.