This month Paul, JP and Dean look at the advantages of carrying a telescopic Tenkara rod in overgrown small streams.

Tenkara rods – even the most expensive high performance blanks - are all undeniably extremely portable by their very nature. In fact, you could conceivably keep one stashed inside the seat post of a mountain bike - it might even be loaded up with a furled line, tippet and fly on some EZ-keepers!  Alternatively, a spool holder (which we prefer, especially for level lines) will fit in almost any a pocket on your clothing – even ones that wouldn’t accommodate a fly reel. Weight and bulk can be quite significant issues when either hiking or biking.

To enjoy similar portability with conventional fly fishing gear requires a telescopic rod – which is a nice alternative when carrying a pack. You may find, though, that the manoeuvres required to thread the line through rod rings, extend the rod and pull line and leader out without getting snagged up in the tip ring take a little more time and effort than unspooling a pre-rigged cast holder. If you have to reverse and then repeat this process each time you move through dense undergrowth between fishing spots, it can eat into your fishing time and patience. The rod rings also make the super-stash mountain bike option a no-go and as yet, top end fly rods are not available in telescopic options.

This ease and speed of setup can be appreciated in these two simple instructional clips:

This last point about bushwhacking through undergrowth is something Paul finds himself doing regularly because of the dealings with forgotten urban rivers.  His day-job with the Wild Trout Trust often brings him into contact with rivers of this type and sometimes with the opportunity to snatch perhaps 20 minutes of fishing during a lunch break. Many of these “quick fixes” involve something of a scramble down walls and steep wooded slopes to drop down into the actual river valley bottom. Dense growth of crack willow and invasive buddleia are the enemy of long delicate carbon wands and loops of fishing line during these “in and out” raids. Even on longer sessions on the wild unkempt rivers that we both regularly fish, moving between pools can be extremely frustrating with a conventional rod, reel and line. So many components seem to be ever-ready to snag on brambles and trailing branches! With a collapsed tenkara rod, the process is much more straightforward and much less “sweary”!

It was on a stolen 20-minute session in summer 2012 on a sandwich and coffee break during a walkover survey of an urban stream that Paul managed to catch a few trout and introduce Chris Firth MBE (http://www.urbantrout.net/film-night-fish-passage-comes-to-meadowhall/) to tenkara. Previously, Chris had perceived tenkara as basically a version of pole fishing  – but three or four trout to some nice casting loops and attractive manipulation (or “sasoi”, 誘い) of a traditional kebari convinced him of its fly fishing pedigree!

Without the extreme portability of the pre-rigged tenkara rod, Paul wouldn’t have been able to snatch the very brief session during his working day, as there is no way that he could have carried a conventional telescopic rod and reel along on that survey. These kind of stolen fishing moments make those trout that little bit more special. A collapsed, invisible rod and a lack of reel can also be advantageous in not drawing attention to the fact that you are heading into your hard-won “secret” urban (and consequently open-access) fly fishing spots by the big advertisement of a fully-rigged conventional rod and line. 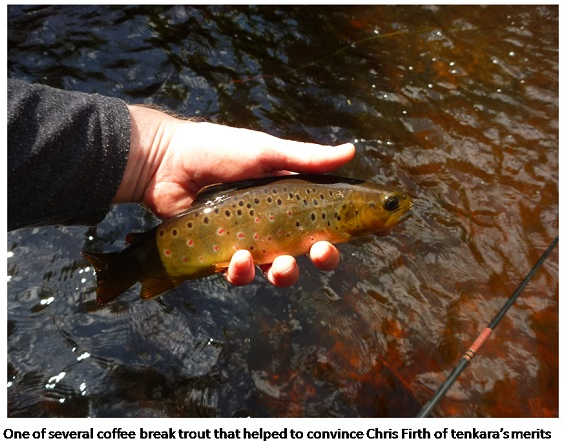 Another hugely unexpected benefit of simply having the portable tenkara gear to hand and the total lack of constraint to wander around came to light during some collaborative work that we got involved with between the Wild Trout Trust, Discover Tenkara and Ladybower reservoir. The guys at Ladybower had very kindly run a charity event in support of both the WTT and Help for Heroes charities – and they wanted some advice on making life better for wild trout populations (and we both were keen to examine the potential for wild habitat filming that we undertake for the WTT). During those discussions it was necessary to take some long walks on the high moorland feeding the reservoir complex – and talk turned to a potentially sustainable and very light fishing pressure use of small moorland tributary streams. Of course, we both immediately saw the suitability of the single, barbless fly approach to mountain stream fishing that is modern tenkara. On our next trip up there we were accompanied by the people who own and control access to the land and were able to demonstrate the appropriateness of the method and how this could be married to a small, dedicated group of people that would also manage and protect the wild habitat. Again, the ability to wander around and explore, nipping from pool to pool and through upland forest as well as over open moorland enabled us to test the streams for the presence of fish. Tenkara proved, as you would expect - given the similarity of the surroundings to the features of the streams in its birthplace - to be the absolutely perfect method. In addition, the delicacy of the rod tips were a superb cushion for the landing the small upland trout quickly and without harm. The whole thing was a match made in heaven (or if you prefer from heaven: “ten kara”!!). So, almost totally by accident, the idea for the first UK syndicate of people who had a love of tenkara to band together and both care for and lightly fish these small upland streams came into being.  You can see a little of the waters that the Discover Tenkara syndicate will be taking responsibility  for in the upcoming  trout season in video below and visiting anglers can get arrange a variety of small group or individual experiences with us if they would like to experience them first hand. We also aim to consult with and host as many international experts as we can so that, in future, we can aspire to becoming a centre of excellence for the traditional Japanese fly fishing method that is tenkara.

We look forward to saying “Yoroshiku onegaishimasu!” (pleased to meet you!) to some interesting folk in the coming years.