Paul Sharman heads to Florida with his fly rod in his case. 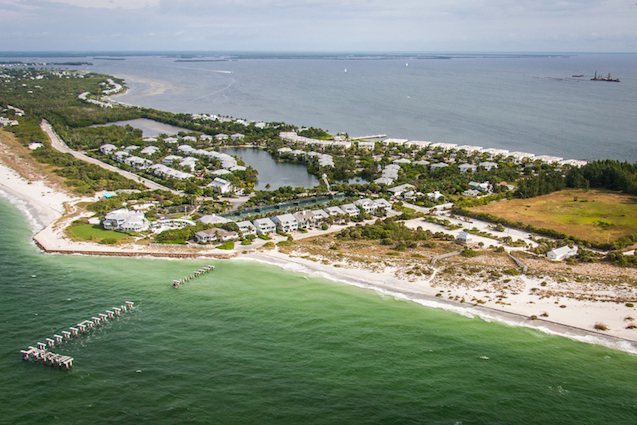 Boca Grande is located on the tip of Gasparilla Island which is a thin strip of sand separating the Gulf of Mexico from Charlotte Harbour.

The pass (just out of shot to the right in the photo) from the Gulf of Mexico into the protected waters of Charlotte Harbour beyond at Boca Grande in south west Florida is famous amongst specimen tarpon hunters. Triple digit fish arrive in the high season which peaks around June, feeding on crabs and baitfish being washed out of the bay. During this time the pass can become like a parking lot with dozens and dozens of drifting boats hoping to hook their anglers into a fish. While you could try a fly on quieter days it is really a bait fishery best suited to heavy gear in the strong currents. Save the fly fishing for hunting along the beaches for pods of fish and inside Charlotte Harbour itself. As much as I love tarpon, it is the other species that live in the bays, channels and flats of Charlotte Harbour and Pine Island Sound to the south that really get me excited and none more so than the bull of the flats, the redfish.

Way down in the Pine Island Sound area there are huge areas of mudflats that appear and disappear with the tides and that is where expert guides like Capt. Tommy Locke will pole you around in their shallow water skiffs while you take your shots once a fish is spotted. Just like a bonefish or permit you lead the fish with the fly if it is moving but if it has got its head down feeding you can drop the fly much closer if you dare, giving it a little twitch or two to catch the fish’s attention as its dinner tries to escape. If you strike and miss, get that fly back down to the fish quickly and you may find it will be still be searching for it and you get a second chance.

This is what it is all about.

There is something about stalking tailing fish that for me is the epitome of why I love fishing. I suppose it appeals to the deep-rooted primal hunting instinct within us all, but for me it is also about the fact I am singling out an individual fish to focus on which I can observe and try to predict if possible. A redfish’s tail waving in the air is obvious as  a target but can you spot the subtle swirl made under the water as a fish turns or spot the wake of a fish heading towards you and anticipate where it may stop and put its head down to root around for crabs, shrimp or small fish. Maybe I am part heron as I love the slow and deliberate stalking of a fish like this as I move to intercept them whether it is a redfish like this one in the photograph, a bonefish in the Caribbean, spotfin croaker in the Californian surf or even a rising trout in freshwater. The challenge is the same and that is what keeps fishing exciting for me. 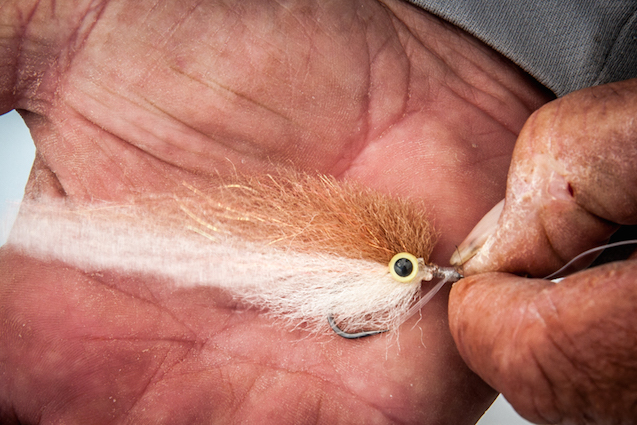 Stock your flybox for SW Florida with baitfish patterns like this one plus crabs and shrimp imitations.

In this particular fishery the fly of choice on my visit was this tan and white Puglisi style baitfish pattern that Capt. Tommy Locke had selected and sure enough it caught all our fish on that day. Spot the weathered hands of a guide who puts in hundreds of days out on the water each year and who subsequently knows his fishery inside out. As well as the sub-surface flies for your flybox, don’t forget to put in some poppers too as redfish can respond well to surface disturbance and it can be a very exciting method of catching them on the right day. 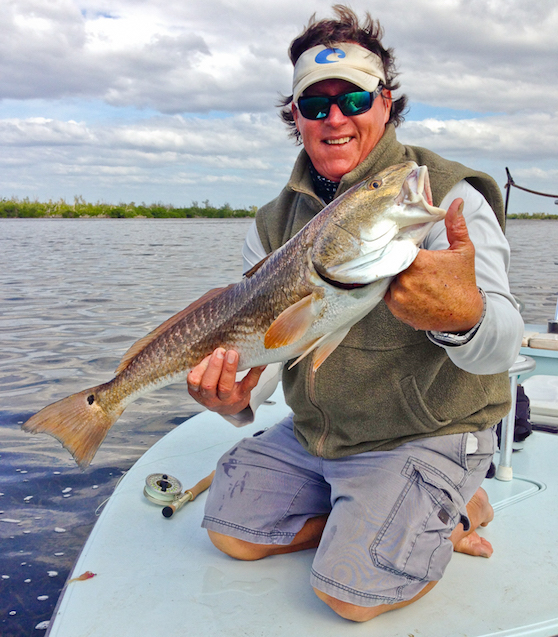 Capt. Tommy Locke displays the author's first redfish of the day for the camera.

Redfish are defined by their large head and shoulders which makes for a powerful fight, that beautiful coppery-bronze colour and of course the eye spot(s) on the tail although they can also have more spots on the body or indeed none at all. They will test your fish spotting skills as even if they are not making any sort of obvious disturbance in the water, you will still need to be keeping your eyes peeled from the casting platform while you are being poled along watching out for them cruising along the bottom on the flats. 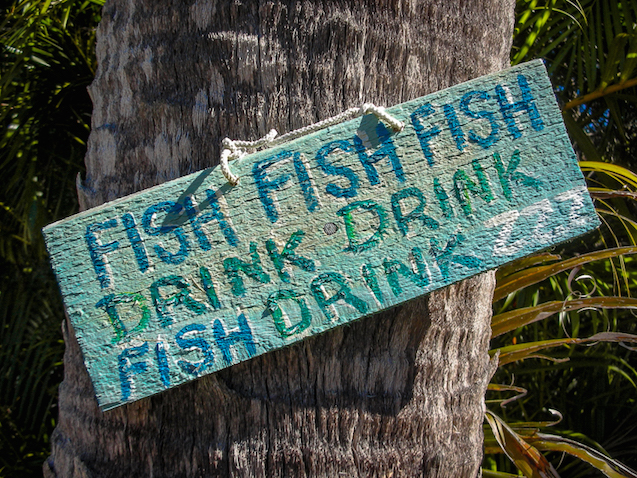 If you’ve caught your redfish then this is one option but there is so much more out there!

Not a bad mantra to live by and I even know some who probably take it too much to heart sometimes but don’t stop once you’ve caught your redfish, there are many more species of fish that make the Harbour their home and are worth fishing for. 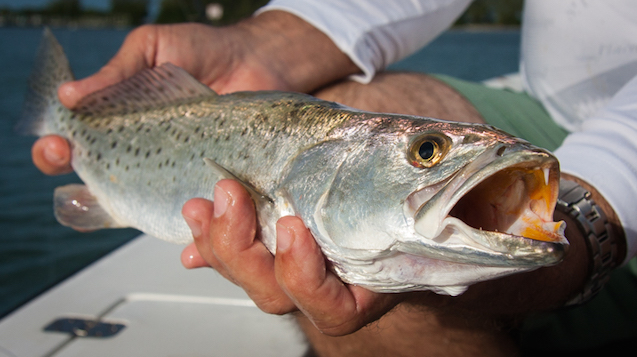 Charlotte Harbour has a large population of spotted seatrout and they are a nice aggressive sporting species. This one pictured is just an average size at a couple of pounds but can still give a good tug on the fly rod. What you really want though is what the locals call a ‘gator trout which is a real specimen of say 8 pounds and upwards. They tend to hang out in depressions amongst areas of sea grass where they can ambush shoals of baitfish as they pass by.

Another of my personal favourites, the snook is the alleyway mugger of the harbour, hanging around deeper channels next to overhanging trees where it can tuck itself away under the canopy if possible whilst waiting to mug its next victim. They do venture out into the open as well, especially if there is a nice school of baitfish to be attacked and can sometimes be spotted cruising along against clean sand bottoms. In this photograph, my guide for that day, Capt. Roger Crafton shows off a typical Charlotte Harbour ‘linesider’, nicknamed for that very distinctive black lateral line. 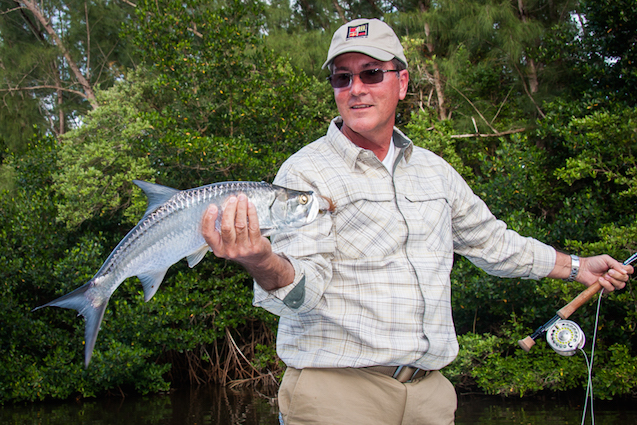 This area of south west Florida is also a nursery area for tarpon and in certain places there are plenty of juvenile fish which make for great sport on light tackle. This one channel we fished in the photograph was full of small tarpon this size that were constantly rolling and chasing our flies. My buddy Mark Spurgeon and I took turns casting, catching and laughing out loud at the aerial acrobatics of hooked fish and the crazy swirls and constant dashes at the fly. They were hitting small clousers well but also having a go at the poppers I tried casting to them but were not hooking up as well. Out in the open water of the main Harbour and Pine Island Sound you also have the chance to come across the full grown adults so its always worth having a ten weight setup on board ready to go. 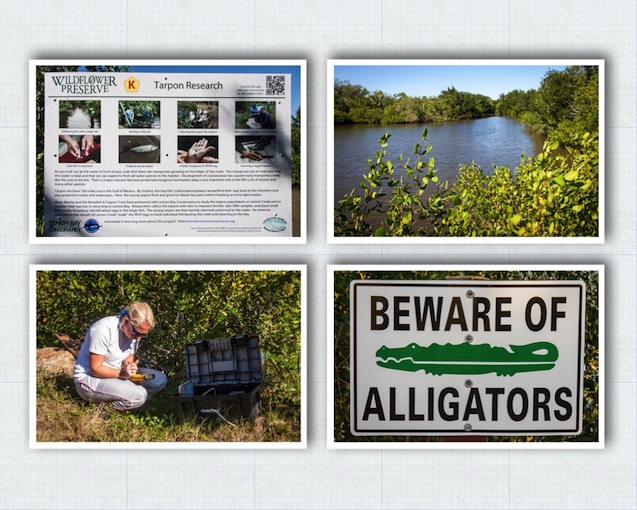 Just north of Gasparilla island and Charlotte Harbour lies the Wildflower Preserve located in the Lemon Bay Conservancy area. Here in the backwater lagoons, important conservation research is being carried out on juvenile tarpon habitat by the Bonefish & Tarpon Trust and Mote Marine to learn more about the dynamics involved in creating and managing good habitat and the migration of the juvenile fish around the system. The idea is to learn more about why this particular area is suited to harbouring the young tarpon while they grow so other areas like this can then be discovered and protected. The shallow water lagoon environment is not without its risks for fish and scientist alike though as alligators also enjoy this habitat. 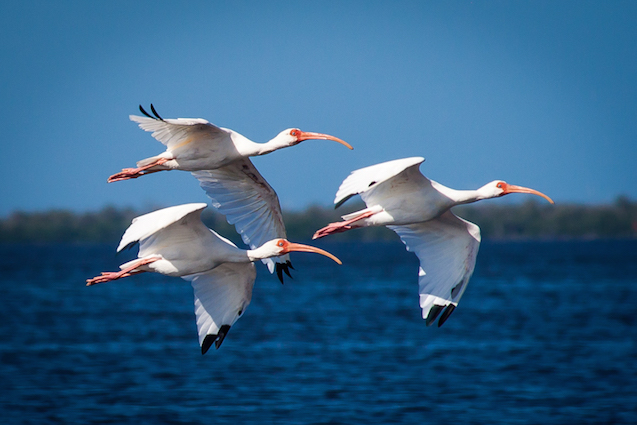 A bonus of the rich shallow water environment of Charlotte Harbour is the incredible amount of birds and other wildlife you will come across like these American white ibis. Pelicans, herons and ospreys galore are constant companions and if you are lucky you may also come across dolphins and manatees too. 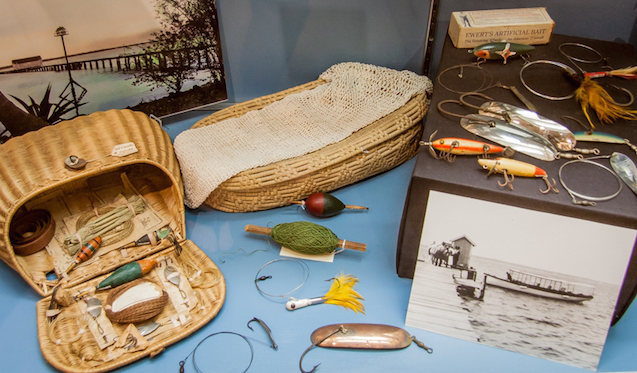 On a day trip down to nearby Fort Myers, a very interesting stop was made at the winter estates of Messrs. Ford and Edison who built houses right next to each other to escape from the cold winters of further north. Thomas Edison actually started out working for Henry Ford before he went on to create his own fame. Of course both families spent a lot of time in the outdoors but I was particularly pleased to find this nice little display of Edison’s own fishing equipment from back in the day. If you are staying in the area I would definitely recommend a visit. 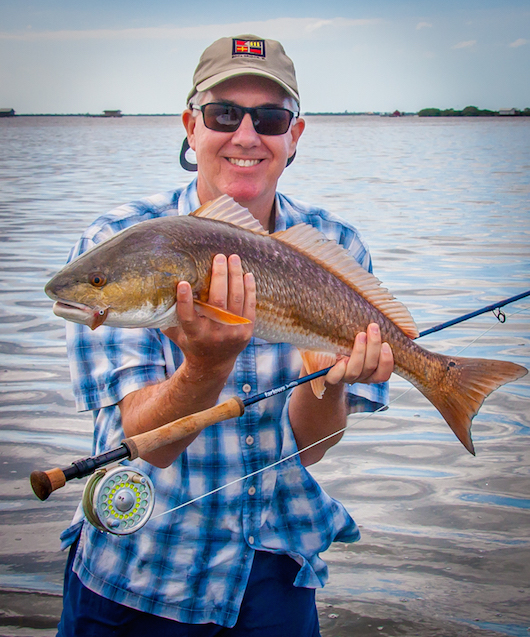 Just to prove I did actually catch something myself.

I have been a freelance fishing / travel writer & photographer since I was persuaded to submit my fishing stories and photos to magazines by friends whilst living in the "fishing paradise" of San Diego, CA. at the turn of the last millennium. This has led to well over a hundred photos, feature stories and articles being published in the New York Times, several fishing books and trade catalogues plus numerous magazines, ezines & websites around the world. I have also designed and produced digital page-turning magazines and brochures for several clients.

I am based in Sussex within an hour's travel of the two main UK international airports of London Gatwick and London Heathrow and of course the capital itself.

My wish is to return to live in the USA just as soon as I can work out how (or unless I receive a better offer!)

Holiday rentals in the area - http://www.bocagranderealestate.com