I was sent this piece by Colin Duffy who wrote it in the 1980s. He asked if I'd like to publish it. It would be easy to tweak it a little to make it look new but I really like the idea of being "as is". From what I gather little has changed except the pub is no longer open. Enjoy.

It’s a long way from London to Lerwick.

The flight to Aberdeen takes only slightly longer than the tube ride to Heathrow and the bus drops you conveniently near to the harbour. But it’s a 14-hour overnight voyage on the St Claire before you see land once more. It is possible to fly from Aberdeen to Shetland of course, but with the restaurant, bar and sing-a-long evening on-board it’s not nearly as much fun. The sea crossing makes it like a real journey and you arrive in port at sparrow’s cough watching the islands unfold in front of you. If you have the choice don’t do it the easy way. 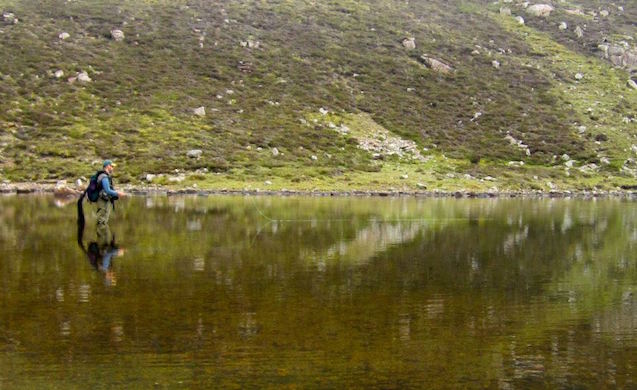 Shetland is a group of islands so far north of Scotland that they’re almost nearer Norway. In fact they share the same latitude as Helsinki, Bergen, South Alaska and Greenland and, until 1472, belonged to the Danes. Perhaps because of their remoteness the Shetland folk are an independent people – if you want to upset one, call him a Scot – used to looking after themselves in close-knit communities in an often-inclement climate. The Gulf Stream prevents the severe cold of the far north but contributes greatly to the wind, which denudes the islands of trees and is a constant factor in Shetland fishing. In the great storm of 1987, when London complained of 100 mph winds an anemometer in Shetland registered 124 mph before being blown over!

But the beauty of Shetland to the game angler is its 360 odd lochs containing good heads of wild brown trout which, when combined with its remoteness and wild beauty, means incomparable fishing for the adventurous. With a £7 permit from the Shetland AA you can fish just about all those lochs – for a whole season.

The lochs themselves aren’t large – you can fish the complete banks of the largest easily in a day. Or half a dozen if you prefer. The fishing is mostly for wild browns although from August onwards sea trout and salmon make their way up the voes - one of many Shetland words, this one meaning fjord - to the burns and lochs. There are no rivers to speak of but the locals talk of good fishing in the voes during sea trout runs. But as this was June I was looking for brown trout but always hoping for a sea trout with no sense of timing.

As I’d never been to Shetland the first step was a trip to the tourist centre at Lerwick to pick up permits and the SAA’s excellent handbook - £1.

But given the choice, where to start? Well I had a beginner with me so acting on a bit of local advice we went to the small loch at the town of Voe. This loch is easily accessible just off the road and packed with free-rising trout up to 12oz. We caught and returned a couple of dozen in 4 hours – the biggest being 8oz – excellent fun and a great introduction for the novice. We were following instructions, the handbook said that most locals use a two fly cast of traditional wet flies – size 10 and 12 Black Spiders, Black Pennel, Zulu, Butcher, Red Tag etc. Later in the season flies that do well are Greenwell, March Brown and Wickham’s fancy. I’m a great fan of green tags on flies and had several trout on a Green Tag Zulu fished on the bob. The most successful method – and also the most satisfying – was to cast into the rings made by a rising fish – 9 times out of 10 the fly would be taken immediately or not at all. 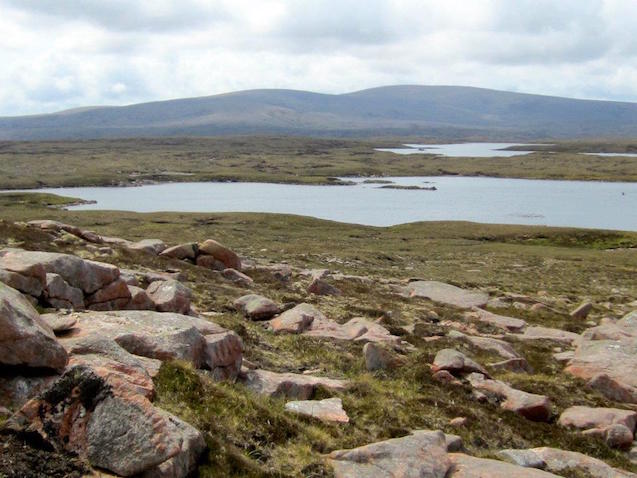 The next day I had a couple of hours free in the evening. June evenings are usually special times for fishing but in Shetland they are even more so because they last almost all night. Being so far north – over 200 miles north of Aberdeen – it never really goes dark. At about 11pm the sun sets, and stays just below the horizon until around 4am, when it rises again. This gives a sort of semi-permanent dusk called the “simmer dim”. This has a strange affect on both fish and fisherman – neither know when it’s time to pack up and go home. There can be rises all ‘evening’ but the best seems to occur around 1 am.

This night I only had a couple of hours and as my partner was using the car that evening I chose to walk to Sandy Loch just outside Lerwick which is now used to supply the town’s water. There was a wild northerly whipping up peat-stained, tea coloured water and really only one place to fish – into and slightly across the wind using a short leader and using one of the local’s favourite flies on the bob – the Loch Ordie. A fish smashed into the fly twice on the first cast. After that, in a period of two hours I landed and returned six fish averaging about 10 oz with many risen and lost - all to the Loch Ordie pulled quickly across the waves. But when the rain came, driven by the wind, both the fish and the fisher called it a day. 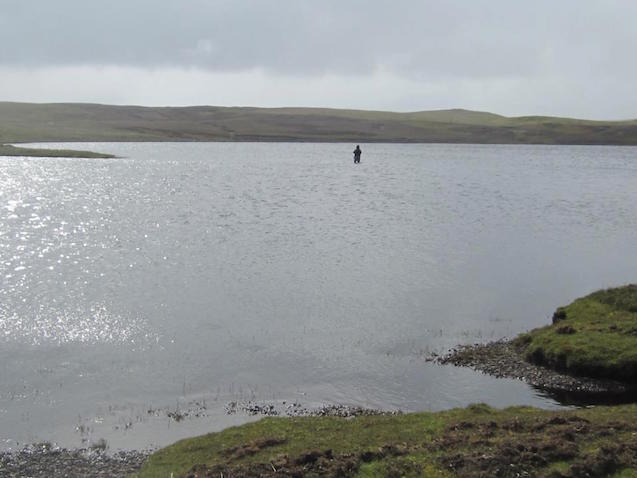 The next day we set out to explore the further reaches of the mainland, in search of bigger fish in the wilds behind Ronan Hill, the highest point on Shetland. There are a few interesting things to see on the way – at one point it’s possible to throw a stone from the Atlantic to the North Sea and a beautiful, ancient pub – The Lodge – the oldest pub on Shetland where good food can be found at reasonable prices.

The walk from the nearest road took two hours across rugged country – there are no paths. Heading for Swabie Water we passed four good lochs all of which held good fish but Swabie was the one we’d picked out, reportedly holding browns up to 3lbs. The weather was bright but the cold northerly was still with us – not a good sign. Even so our hopes were high as we walked the treeless hills, following small burns through a minefield of peat bogs and bolder-strewn, broken land; we were effectively walking from one coast to another.

Swabie is one of the small lochs in the area and you really need a compass and a good map to find it – which is good safety advice anyway, the handbook warns of mists and fogs that can descend at any time. After a hard trek we fished this highly recommended loch for six hours without seeing any sign of a fish at all. My partner and I fished every inch of that loch and it goes down as the most convincing blank of my fishing life. It was just wrong – a hot, bright day but with a strong, cold wind kept the fish down and even leaded nymphs and lures didn’t interest them. We finally gave up as black clouds started forming out to sea, threatening to trap us in this wild and lovely place. Still, there was the Lodge on the way home.

The next day was sea fishing – a pleasant diversion. Shetland is famous for its sea fishing, holding many species records but today we went after the local favourite – haddock. We had a successful day due to the skipper putting the boat over the fish, nothing to do with the skills of the fishermen! We caught haddock, whiting, dogfish, ling and pollack. But I was still looking for the first 2lb+ brown that I knew were to be found all over these islands. So the next day was spent at Tingwall Loch.

This relatively large loch just reeks of fish. Being both extremely pretty and fairly close to Lerwick it is also a popular fishing venue for the local AA, which meant that for the first time I had to share the loch with other anglers – two of them in a boat! I arrived around 11am to find a buzzer rise just beginning and with my 3 fly cast of small Black Spiders I soon had a dozen or so trout averaging around 10oz. About 20 yards further than my wading and casting ability, far larger fish were rising along an imaginary line joining an island and an outcrop of land – an obvious underwater ridge. I needed a boat. 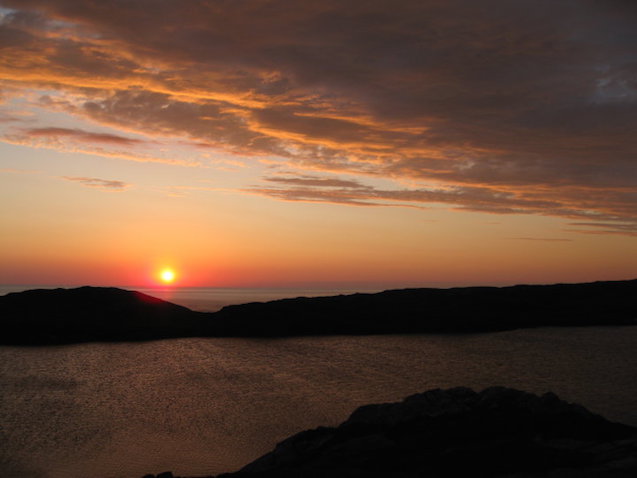 Later that day I was taken by something significant – again it was to the Loch Ordy pulled slowly this time across the waves. The unsophisticated crash at the fly took me completely by surprise. I had been fishing on autopilot for a couple of hours, in an almost meditative state. The resultant immediate break disheartened me totally. I had convinced myself that there were no large fish anywhere within casting range and had tackled down accordingly, fishing the 9 foot cane nymph rod with 2lb droppers for the half-pounders. Later I met the locals in the boat – they had a total blank, blaming the still cold northerlies.

Only one fishing day left – where to go? I’d been doing it by the book this far and while I’d caught plenty of fish and enjoyed myself thoroughly I still had a hankering for a fight with a big wild brown so I decided to fish a loch not in the book – well, if you were the Shetland AA would you tell the tourist everything? I’d heard of a loch praised by a local who’d poached it using an otter board in his youth. So I walked the mile or so up the burn to fish this unreported water. My first cast attracted a 10oz fish and the rest of the day produced another 20 or so around the same size with one beautiful fish breaking the magical 2lb mark taken from the head of the burn. The Green Tag Zulu was the responsible fly.

Back in the St Claire’s dining room we were leaving the sun in the north passing the Fare Isles on our starboard. We shared a bottle of Scottish birch tree wine with a fellow passenger. He turned out to be an avid angler on business in Shetland. That morning, whilst waiting for the ship, he’s fished Loch Spiggie – possibly the most famous of the Shetland lochs – with a lot of success. He says it’s possible to wade across it with fish rising all around you – no boat required.

Now that’s something for another year!

palmered down from the eye of the bend