As a writer, if I may call myself that, the most important person to you, after your audience, is your Editor. For it is the Editor who decides whether or not to publish your musings and, if the work is paid, to pay you. I have been fortunate enough to do a little ‘paid for’ work in the angling press but the vast majority of my output appears in journals or online. My greatest supporter, as a writer, has been Pete Tyjas with articles appearing almost monthly on Eat, Sleep, Fish over the last couple of years. I would love to spend more time with Pete, chatting over articles and planning for the year ahead but unfortunately Pete lives in Mid Devon, a good couple of hours drive from my home in West Berkshire.  So every opportunity must be grasped.

When my friends invited me down to Bude for Easter I dropped Pete an email asking if I could drop by for a coffee en route, a chance to catch up and chew the fat. I got a timely reply saying yes, and asking if I fancied going fishing. The season in my manor doesn’t open till beginning of April and Easter was very early year so I thought fishing was off the cards. Then I realised that in the South West the season opens mid-March. Result. So in to the boot, alongside the Easter eggs, beer, wine and rations, went the rods and reels. 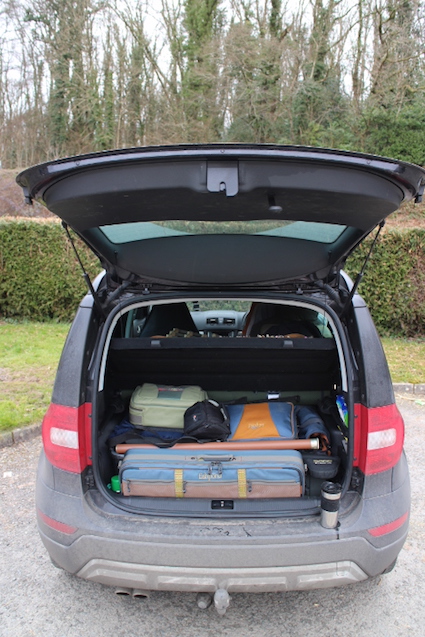 Early spring had been relatively fine and dry and the long range forecast for Easter was quite good. As my trip approached the forecast started to change. Warm and settled started to turn into wet and windy.  Storm Katie had other plans. It was grey and overcast as I drove down the M5 before the Easter traffic got going. As I turned onto the back lanes heading for Eggesford it started to drizzle but when I arrived at the hotel it was dry and calm. The welcome at the Fox & Hounds was warm, both physically and emotionally. 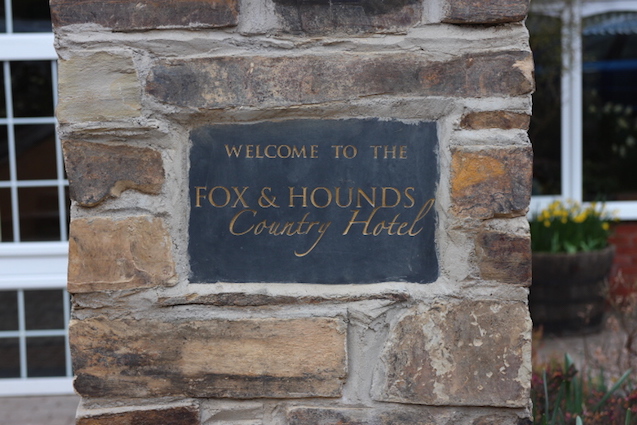 I slumped in to a comfortable chair near reception and read through The Devon School of Fly Fishing’s new brochure as the hustle and bustle of the hotel carried on around me. I was pleasantly surprised a by a few photos of me in the brochure, shots from a previous trip out with Pete and Lewis. When Pete arrived we made our way through to the bar for a coffee over which we discussed the strategy for the day. This was fairly straightforward; go fishing. So we loaded my gear into Pete’s pick-up and headed up the valley. We chatted as we drove. I was keen to hear how the season was going so far and was pleased to hear that a few fish had been caught already. Pete picked a beat on the upper Taw to start the day. We parked at the stone bridge and wandered up the field to a corner pool that Pete said always holds a fish. I watched the water as Pete rigged up. 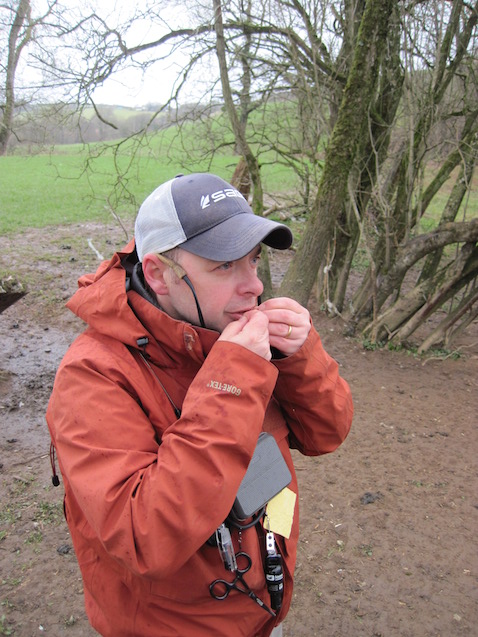 Nothing was rising so Pete tied a bushy dry on a dropper with a tiny bead head nymph on the point. We just had the one rod, we would swap over as fish were caught or likely spots fished through. I fished the first pool. 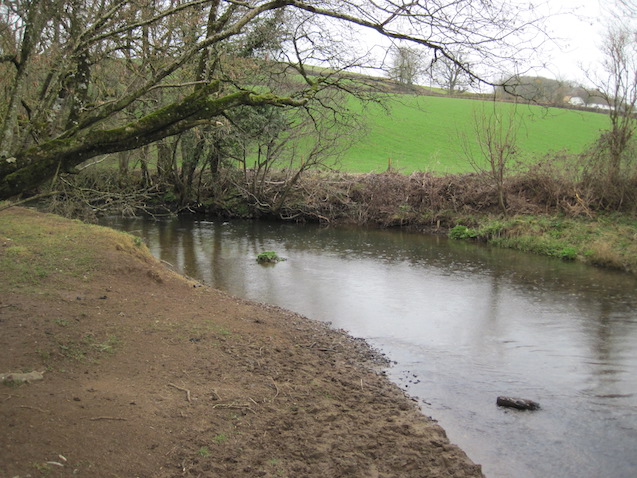 If that pool did hold a fish it wasn’t interested in what we offered it so we moved on to the next corner pool just above a fallen tree, victim of the winter storms.  At the head of the pool the dry fly dipped and as I tightened up I felt the wriggle of a fish. It was a typical Taw wild brownie. Determined not to come to hand, it dashed and splashed, jumped and dived before finally succumbing. It was nice to catch the first fish of a new season and to know we weren’t going to blank. Pete looked even more pleased than I did. He looked even more pleased when he took the rod and caught a slightly larger fish from the same run. 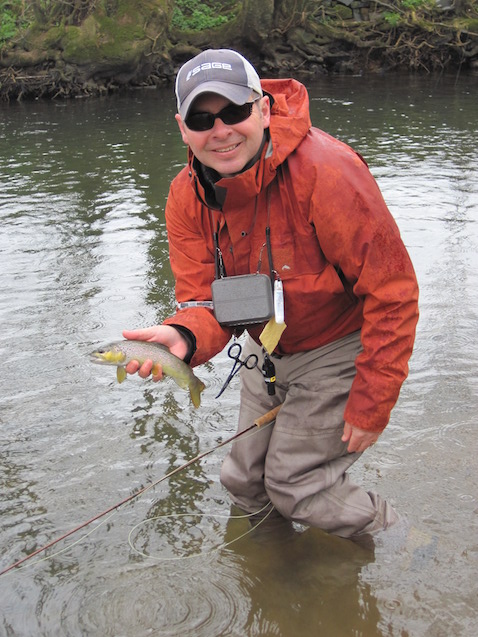 It was interesting to watch Pete’s style. He is lucky to spend his life fishing and guiding on the streams and rivers of Devon. He is perfectly attuned to his quarry and the conditions in which they live. Pete covered the water systematically, adjusting his casts and mending to ensure the perfect drift, searching out the likely holding spots. His strike is purposeful and hair trigger. Whilst I felt I was fishing the water well my strike was more considered and relaxed, more of a lift than a strike. 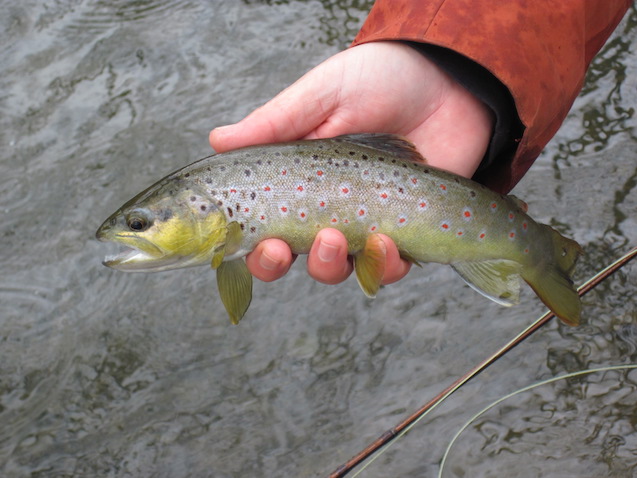 As we worked up the short beat we picked up a couple more fish on the nymph. Along the way the conservation eventually and inevitably came round to rods. Both Pete and I have extensive rod collections and we are both great fans of Sage, in particular their slower actioned light line rods. Pete had picked a 7' 10" 2wt TXL-F for our first session. It felt light in the hand and flicked the duo rig out effortlessly. A delight of a rod.

Before returning to the Fox & Hounds for a spot of lunch Pete wanted me to see the Lapford Yeo, a tributary of the Taw. We had crossed it on the way to the Taw and it looked very fishy. As the Lapford Yeo was a slightly bigger river than the upper Taw Pete put up one of his Sage MOD rods, a 9 foot 2 weight. It looked striking in Pete’s hand, the blank vivid jade with yellow-green wraps. These moderate action rods could have been designed for the Taw or Yeo. They presented the fly delicately and accurately and with minimal effort. 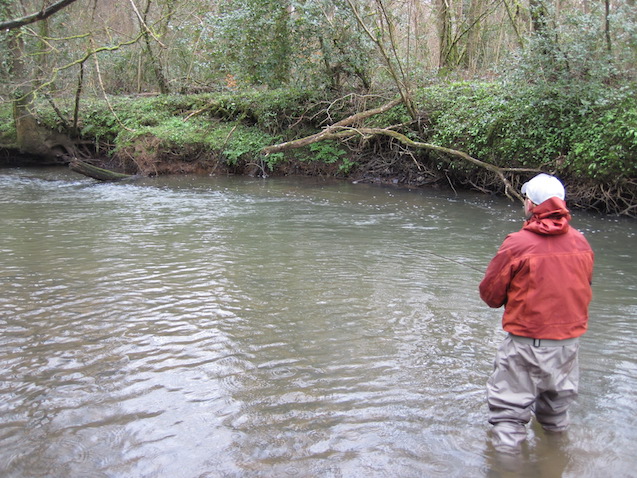 Pete on the Lapford Yeo

Despite the Lapford Yeo and Taw flowing close by one another their character is slightly different. The Yeo darker somehow; more moody. Pete fished the first promising run without any luck and then he thought he saw a rise. We stood and watched a back eddy on the opposite bank and sure enough the fish rose again. We watched the water and here and there a Large Dark Olive drifted by or fluttered off. A few were washed back against a small tree and just in front a couple of fish lurked ,picking them off the surface. Pete snipped off the nymph and replaced the bushy dry with an emerger. I flicked it out a few times and managed to cover the first fish; it was ignored. Pete changed it for a Dun and on the third or fourth, the fish engulfed it. 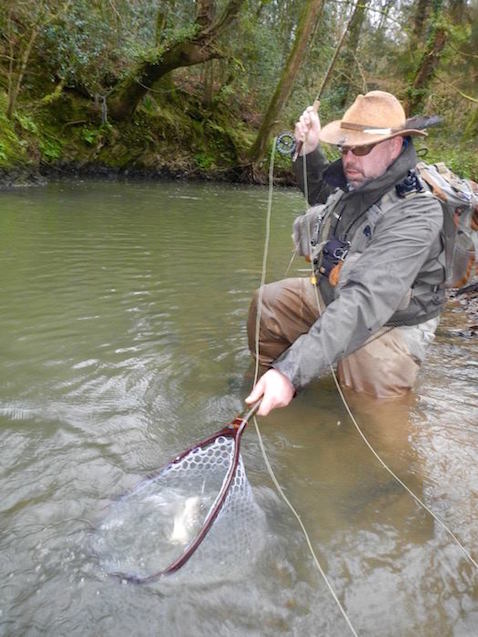 That first fish of the season on dry fly brought the smile back to my face. Pete took over the rod and repeated the trick. We didn’t notice the weather change we were so focused on those two fish. Suddenly the temperature dropped two or three degrees and the Olives stopped hatching. As quick as it began it was over. Typical of these early season days up in the hills. It seemed like time for lunch. 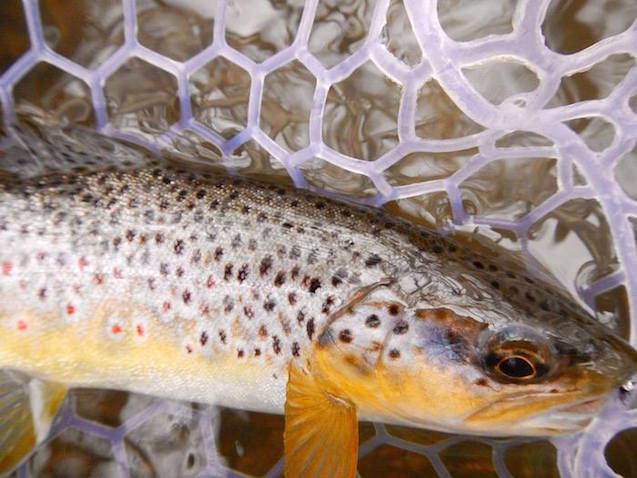 Pete treated my to a superb sandwich and a pint of local cider as we warmed up by the large fireplace in the bar back at the Fox & Hounds. Both were very welcome. It gave us some time to chat about the writing rather than just the fishing. Pete seemed happy with my contributions of late and was looking forward to seeing what was coming up. As we left I remarked on the catch returns, displayed boldly over Pete’s table opposite the bar. This is where Pete brings visiting rods up to speed and briefs them on the day ahead. Pete's hard work is bearing fruit with catch returns steadily building year on year. It will be interesting to see the numbers come the end of the season. 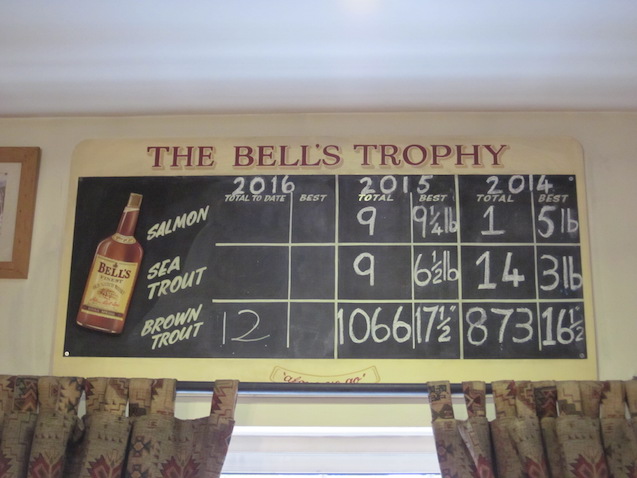 Scores on the doors

There was some unfinished business from last year’s trip with Pete and Lewis. We had finished the day on the Taw by Bridge Reeve. I hooked and lost a good fish from a fast run and was gutted. Pete felt there was a good chance it would still be there. It wasn’t . The only life visible a busy little dipper. So we decided to end the day trying a new bit on the Little Dart just above the section we had fished in 2015. Despite there being no insects hatching, a small game trout lunged at my dry fly in the very first run. I was too slow and missed it. This is where Pete’s hair trigger strike was going to be needed. We worked upstream diligently covering each run and pool. As the name suggests this isn’t a river that requires big casts. I would have probably fished a shorter rod but the extra length of the 9 foot MOD came in handy for holding the line off the water in the streamier runs. 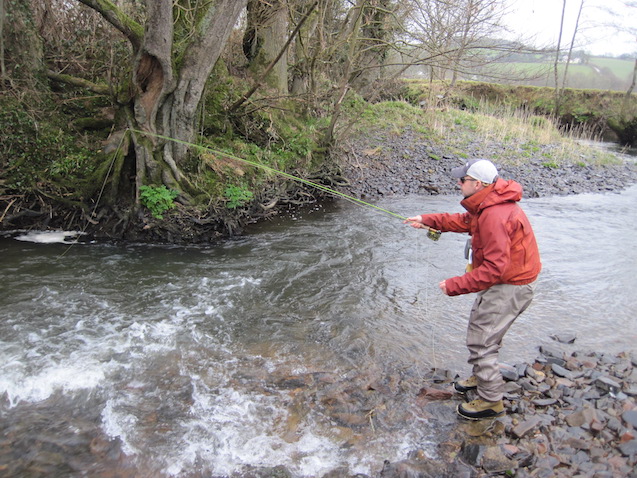 Short lining on the Little Dart

The Little Dart wasn’t generous that late afternoon but we left happy, having caught a few and especially a couple on dry fly. It set the right tone for the season ahead. Pete dropped me back at the Fox & Hounds before heading home for his tea. I re-loaded the car and then turned onto the A377 wondering which way TomTom would take me to Bude. As I wound my way up into the North Devon hills and onward to Cornwall I reflected on a lovely day fishing with a wonderful Editor. I’m a very lucky writer.

If you fancy a day with Pete you can find more details on the website:

The Fox & Hounds Country Hotel is a great place to base yourself if fishing in North Devon: