Pete Tyjas heads to Bristol for some small stream fishing

Bristol is a vibrant city. The murals that greet you as you drive through the centre of the city along with the many smells of food from the cafes and restaurants that represent many of the cities of the world adds to the cosmopolitan feel of the place.

Just a short drive away from the very centre though things could hardly be more different. I was standing on a bridge peering in to a pool with my host for the day, Jon.

We’d eaten a big breakfast, I say we, Jon had gone for a slightly healthier option of poached eggs on toast while I’d plumped for a full fry up leaving me set for the fishing ahead. 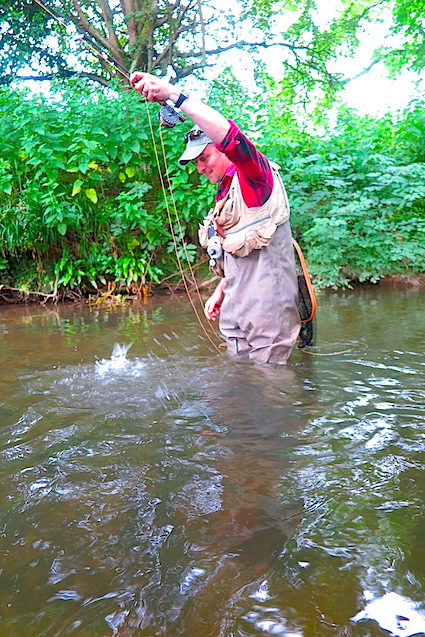 The stream was a small one. The sort I really like to fish where accuracy and stealth are everything. It is July and the grayling season is now underway and after hearing they lived in the stream I set my 2wt rod with a small nymph under the dry in the hope of catching one.

This was proper small stream fishing. Jon had to beat a path through the dense vegetation and slide into the river. I followed. His hunch of the location of a favourite pool worked out and we’d landed in just the right spot.

I’d suggested we fish together and take it in turns and after agreeing Jon offered me first the shot. I accepted of course and after checking the unfamiliar surroundings made my first cast. It only took a few more and my dry dipped and shortly afterwards I’d returned my first grayling.

Jon is left handed which made it the perfect combination for fishing the tight spots and I watched as he cast his dry into the same spot as me. Another grayling, slightly bigger than mine, rose and took the fly. 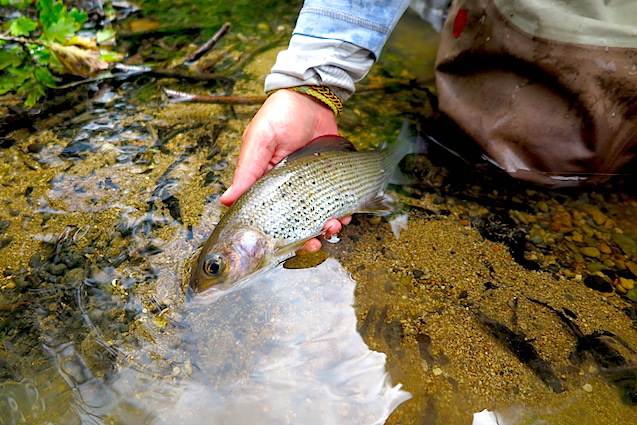 As we moved up the river Jon explained that the river we were fishing is divided into a number of beats and there was a work party on the upper section and so his plan was to stick to the bottom section.

The water was clear so that when in the right position we could spot fish and make casts to them and see their reaction. To be honest, this is about as near to fishing heaven as I can get.

We fished, talked and shared fishing stories. Jon is an avid angler who is equally at home on a loch casting for brown trout or swinging wet flies for sea trout or salmon too. Fishing is a small world and it was no surprise when we discovered we had friends in common.

We reached a bend where the stream turned from right to left. The water had enough pace to move around the far bank and was also deep enough to form a good back eddy that would present a challenge as we worked farther up.

Jon had switched to a single, heavy nymph a little earlier and his catch rate had exceeded mine as I continued with the duo. He quickly caught a fish and offered me the pool. The duo had to go and I tied on a double beaded nymph. The pool looked as though it was 3 or even 3 1/2ft deep and with the speed of the flow I wanted to make sure I got my fly to the correct depth quickly.

I high sticked my first drift, keeping any line away from the back eddy I was almost standing in and watched the fish as my fly moved into their path. One grayling lifted a little but didn’t take. I drifted the fly through again but this time the fish moved the opposite direction away from the fly. I have sometimes seen this with grayling before and once they have decided something isn’t food they will ignore it. I changed fly and kept changing it until eventually the fish took. Jon had been the perfect host and had waited patiently as I had ground the result out. 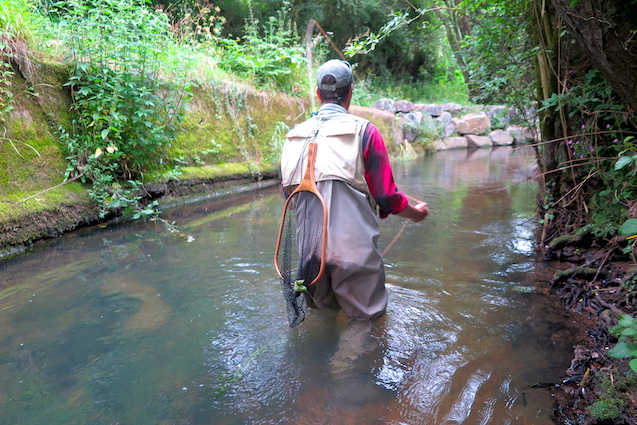 It may be one of my shortcomings, or possibly it isn’t, but when I see a fish that I think I can catch I will stay there for as long as it takes or until it slinks away.

Time had marched on and we’d missed lunch but we’d decided to fish on and have “lunch” when we’d finished fishing.

Jon had said we were coming to a section that was good for trout and I caught a trout first or second cast. There is nothing like knowing your home water.

We moved up a couple of pools and I hooked a small trout that was followed in by a much bigger trout while I was playing it. After releasing the unharmed fish Jon took over with his nymph while I tied on a streamer. 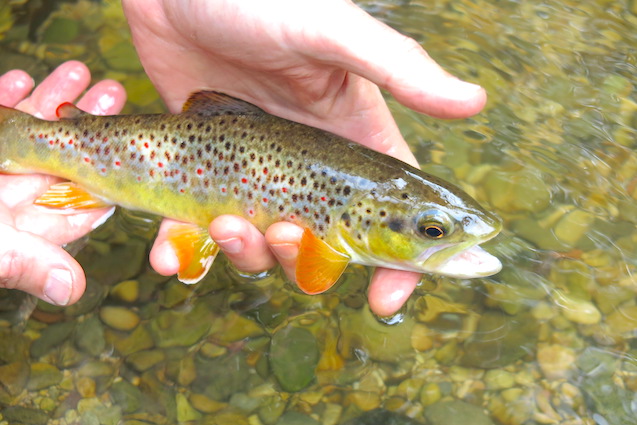 My 2wt groaned a little as I flipped the fly into the pot and after just two pulls I felt a tug and saw the fish that had been following my fly bolt for cover. The plan was spot on it was just the execution that failed.

Jon told me there was a deeper, slower pool just around the corner and I should keep my streamer on. He caught a few more fish on the way and I looked at where I needed to cast as we got to the pool. As small streams go, it was a pretty straightforward cast. If I stood in the right place I could send my back cast downstream over the water and up into the pool ahead. The branches were also high enough to give me all the room I needed. 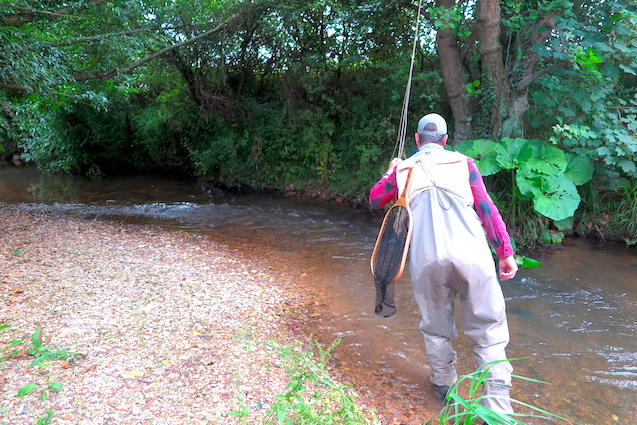 My rod groaned a little more as I made one of the longest casts of the day and after taking up the slack I started to pull back the fly. There was a large swirl just behind it but I felt no resistance. Next cast I did the same and this time the take was a strong, aggressive one. The now hooked fish was heading for cover. A bigger fish knows how to fight dirty and this one knew the finer points of how. It headed for some tree roots and started to try and wrap my leader in them but I managed enough side strain to keep him away from the impending danger. I netted the fish and noticed I stopped holding my breath.

The pool got too deep to wade any farther and so we hopped out, got back in near the head of the same pool and I swung the fly downstream this time. On the second cast another trout hit the fly equally as hard as the last but came off and shot into a deep part of the pool. It wasn’t as big as the previous one. 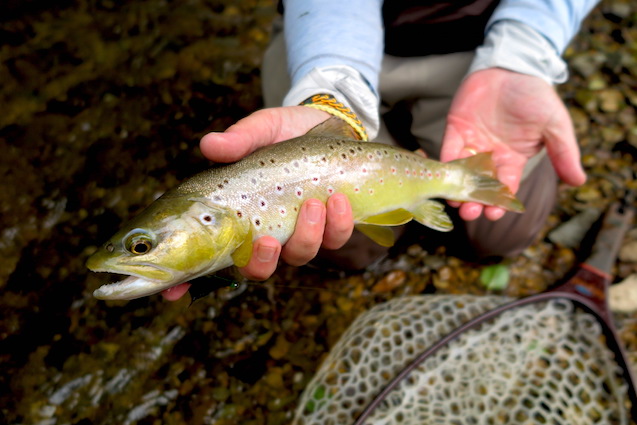 I turned around and looked upstream, the pool ahead was narrow but deep with a uniform, straight run into the tail. The was a bay on the left side and the seam where the back eddy met the main flow looked the perfect spot for a fish to hold. I’d changed my streamer for a nymph but it wasn’t heavy enough. Jon though, had two heavy nymphs and after we watched a grayling take a look at the first drift he lifted into a different fish on the second.

It was now getting late, I had to drive back to Devon and we hadn’t eaten and it seemed the right time and place to walk back to the cars.

We sat on the tailgate of my truck and ate some sandwiches Jon had made and finished everything off with a homemade banana cake. We talked some more about life and fishing. There are times when things don’t get much better.