It is great to see another fishing programme on TV in the UK. We caught up with presenter Andy Ford to learn more about him and his programme.

Andy, can you tell us a little about yourself?

I’m 50 years old, married to Andrea. We’ve been together for 25 years. We’ve got two children and a mad springer spaniel. We live near Winchester in Hampshire. These days, when I’m not making films for telly, I work as a university lecturer, teaching sports journalism students about video production.

I’ve been an angler since the age of 7 and caught my first fish (a roach!) out of the River Lambourn in Newbury. My fishing dwindled away in my teens and early 20s because of my other sporting love, cricket. I came back to it after I started a family. I took my two kids fishing one day, at Andrea’s suggestion, when they were both tiny – and the fire started again. I’ve not looked back since! 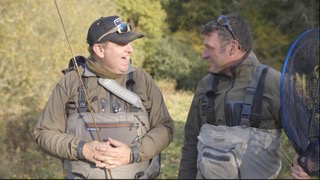 Work-wise, I’ve been a journalist for more than 30 years. I started my career working in news, then worked in sport, covering football and everything else for the national newspapers for 11 years. I moved to TV full time in 2000, and started working for Sky Sports and Sky News soon afterwards. In 2007, I started working for ‘Tight Lines’ as their roving (some would say raving….) reporter. I was lucky enough to cover every discipline of angling. I’ve also written lots for magazines.

I’ve learned so much about my own fishing from the people I’ve mixed with – and met some brilliant people, some of whom have become lifelong friends. Fishing has given that to me!

In fly fishing terms, I’ve been particularly inspired by the likes of Charlie Jardine, Iain and Craig Barr, Phil Dixon, Ben Bangham and Bill Rankin. There are lots more too. Not bad company to keep really…..although drinking with Phil Dixon has its challenges.

I met Rob Hughes while working for ‘Tight Lines’, and discovered quickly we share the same stupid sense of humour.

I’ve been fly fishing competitively for the past 5 years. I’m ultra-competitve…..I finished 4th in last year’s National on the Welsh Dee at Llangollen, and will have the huge privilege of fishing for England in the 2017 Home Internationals on the River Ebbw. In my ‘spare’ time, I work as a river keeper for the Portsmouth Services Fly Fishing Association and look after two stretches of the River Meon near my home.  I love the outdoors and realise how very lucky I am to get fish some of the waters I do.

How did On the Bank come about?

It grew from an idea Rob and I had several years ago. We both love what fishing offers to everybody. All disciplines have so much character and there’s so much good work which needs to be pushed into the public domain. Rob was the driving force in approaching BT Sport. Since the demise of Sky Sports, we’d already been making programmes for BT Sport based around events, including World and European coarse fishing championships, lure and carp angling. When he pitched the idea for a magazine show, they jumped at it. We’ve got a three-year contract to make 27 shows per year - 15 based around events and the 12 part ‘On The Bank’ magazine element. We’re desperate to find backing to make programmes about competitive fly fishing – but so far, no-one seems interested in getting it on telly. Baffling! If you know anyone..... 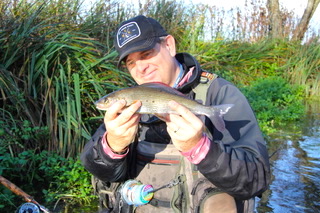 Is pitching to a TV station tricky especially when it comes to a fishing programme?

How do you go about it?

Contacts are everything. Once you know who to speak to, it gives you a foot in the door. Because Rob and I have been in the media and broadcast industry for a very long time, we know who to ask to get to the right person. From there, it’s just trying to fit the ideas you have into the programme template they have.

Was it more aimed at coarse fishing with some fly fishing thrown in, or were you keen to ensure fly fishing got good coverage too?

For me, fishing is fishing. I find the lines are blurred, no matter what discipline you are involved in. We’re trying to deliver a balance of everything to keep people interested.

Is it difficult catching for the camera?

The films we’re making aren’t just about catching fish. They tell the story of a day’s fishing. That means if we blank…we blank! There’s still a story to be told about what happened, as any angler will know. That said, if Rob blanks, he tends to throw his toys out of the pram. I’ve always loved the buzz of producing or presenting live television, or taking the match-winning wicket or steepling catch in a cricket match. I suppose the ‘pressure’ of catching for camera is no different. It’s what makes me tick.

I like the honesty of the programme, I guess it is easy to make it look as though everything goes to plan, but were there times you were sweating on a piece?

Easy! I wish…..In fact the success of every film we do is down to careful planning. We have contingencies for our contingencies!!  Once we’re out on location and the cameras are rolling, I know there will be a film in the can at the end of it. Sometimes the weather messes with what you are trying to do…sometimes the fish do – but it’s all part of the story. I guess I’m a storyteller at heart. The biggest problems we have are in relation to keeping the camera dry and safe – and the cameramen holding them fed and watered.

Where would you love to do a piece on for the programme?

I’ve got a bit of an ambition to film in Slovenia. I love my river fishing so much – and the fly fishing out there looks exceptional, particularly for the grayling. I’m not massively keen to whizz off to exotic climes, fishing for weird and wonderful species. It seems to be what lots of other fishing shows have done. I prefer to champion the incredible people and fishing we have right here in the UK.

How can we watch it if we don’t subscribe to BT Sports?

All the films will eventually end up online and we’ll probably be pushing them towards other channels if we can get some interest. BT Sport is pretty easy to get hold of though – and it costs a lot less than Sky!

How do you see the disciplines of fishing, do you detect growth in some areas and shrinkage in others?

The lack of development in certain areas of UK fly fishing is terrifying. One example is boat fishing,

It’s far too expensive to encourage young anglers to take part, and that’s an area I’d love to see grow. I’m planning to have a good go at Loch-Style fishing in the next year to increase my England profile and score a few more points – so I’ll see what can be done from the inside!

How about your fly fishing, where and what do you enjoy most?

I’m an out and out river addict. I love fishing flowing water, particularly nymphing for grayling. I’ve tried lots of different disciplines in all areas of fishing over the years – and fishing a French leader in a deep pool does it for me every time. That tell-tale ‘thud’ when a big fish grabs your point fly, then twists and turns in the current is awesome. I’m spoiled with the rivers around where I live as I’ve got the Test, Itchen and Meon within 30 minutes drive. But I do love the Welsh Dee at Llangollen. I qualified for the England team there last summer and it will always have a special place in my heart.

One day of fishing where?

In all honesty, almost anywhere with good company.