About two years ago, I did what I had wanted to do for a long time: I got a fishing license. Here in Germany you have to take a class and pass a test at the end to be qualified to go fishing. During said class, the instructor also taught us what AFTMA line ratings are, but also told us that after the test we could forget about this stuff, since probably none of us would ever get into fly fishing anyways. “But why?”, someone asked. “Because the tackle is expensive, it´s a pain to learn how to cast and it´s not effective fishing at all. There are just better ways to catch fish”.

Okay, so much for that. I acquired some spinning tackle and started my fishing career. But the interest in fly fishing persisted in my brain, I started asking experienced anglers about it. The answers ranged from “a total waste of time”, to “the most fun you can have with your pants on, but at the price of limiting yourself to catching less than the others”. So I stayed with my spinning rods.

In January 2016, with not much to do because it was cold and generally bad weather and a lack of motivation to go fishing, I started to ask around what fly rod to maybe buy and how to start learning how to cast it. Shortly after that I was offered a used 5wt for next to nothing, since it was supposed to be not the greatest rod in the world and being a bit scratched. Also I was offered half an hour of casting lessons on the lawn and a borrowed DVD about learning how to cast. As I said there was nothing much to do, I found myself at a pond a couple days later, said rod in hand, and started to make a complete idiot of myself, tangled up in fly line whilst freezing my butt off. Fast forward a couple weeks and many not so youth-friendly exclamations, I had found out how hard it is to cast a fly rod when you try really hard, and how easy it is to get it right if you just focus on feeling what the rod does. Also I started to pile up fly tying materials and started to learn how to tie flies, which turned out to be much easier than learning to cast.

Again fast forward two months, start of trout season. Two friends had planned to hit the creek in our town, which holds trout, grayling, barbel, carp, chub, roach and rudd. Conveniently I live right next door to this creek, so I joined them with my fly rod and a box of my own creations. My friends with their baitcasting gear caught one trout after the other, while I mostly got tangled in trees. Finally I got a bite on a terribly ugly streamer, but I was too puzzled to set the hook, so the fish came off again. I caught nothing that day. But I kept on trying. 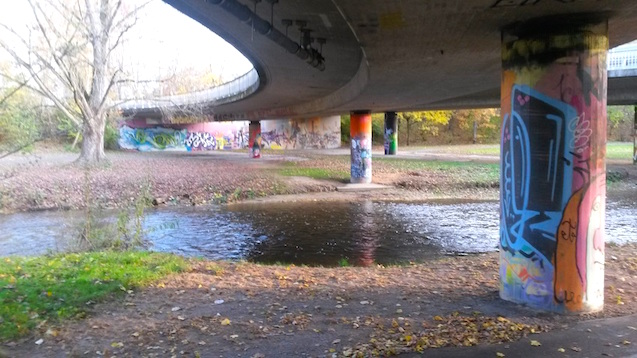 With nothing better to do and this creek at my door, I spend quite a lot of time fishing there. I learned how to quickly get over the feeling of losing a fly in a tree, tie a new one to the end of the tippet and make the exact same cast into the exact same tree again. But I think I´m not the only one who did, and sometimes still does, that. And fly tying is fun, so it´s not that much of a loss.

It took another two months to catch my first fish on a fly, a grayling of maybe five inches, and what a huge success this tiny fish was! The penny had finally dropped and I started catching some trout, some grayling, occasionally a rudd as well. None of those rather small fish put a serious bend in my rod, but they made me quite happy.

But I didn´t spend all my time on the next-door-creek, one day I found myself deep in the woods at a small pond that also belongs to the local fishing club. This pond isn´t accessible by car, one has to find a way through thick underbrush to get there. Nobody knows anybody who really fishes there, so I thought maybe there are some fish who don´t know what a hook looks like and I gave it a try. The walk through mud and brush payed off, as I caught a few roach in a matter of minutes. They were tiny, but again made me quite happy, since leaving the literally beaten path was the right decision. 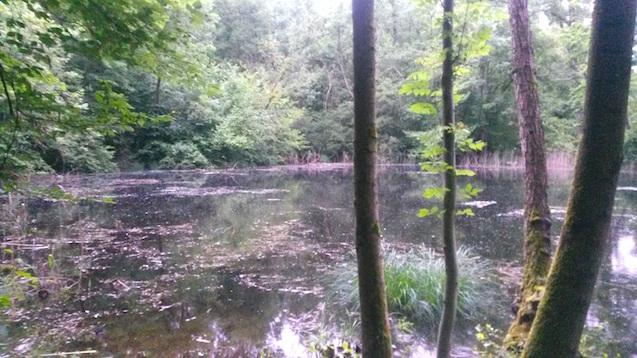 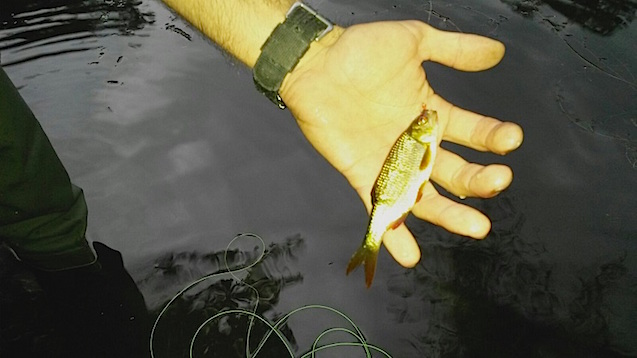 Since I really like the Baltic Sea shore in Northern Germany and there are supposed to be sea trout swimming around, I started looking around for a suitable fly rod and settled for a brand new 8wt.

The idea was to use it mainly for pike at my home waters, and for sea trout while on vacation. As I needed some distance-casting practice, I spend the next couple weeks swinging big pike flies, caught no pike at all, but a zander instead. Not too bad, since I had tried really hard to get one the year before, but all I got back then were pikes. Some casting practice later I started packing my camping gear for a week of vacation on the coast. Last day before the vacation, some casting practice before work, and what is that? A crack in one of the ferrules of the new rod! Damn it, stupid me! As there was no chance of getting a replacement piece in time, I borrowed a friend's 7wt as a backup, in case the taped-up ferrule of my rod wouldn´t hold up. It held, I didn´t catch anything in that week, but at least I had tried. I promised myself to come back in september to try again.

During the hottest days of August, with the water level of the Rhine dropping to a really low level, I took my fly rod to an oxbow lake, where in the past summer a friend had caught lots of small perch with worm and bobber, whilst I had struggled to get them interested in my spinning lures. “Maybe a streamer on a fly rod would work”, I had said to myself back then, after comparing the way the small fry were moving in the crystal clear water to my lures which looked nothing like the naturals.

And guess what, a streamer did the trick surprisingly well. Again, rather small perch, but again, proof of concept. Happiness. 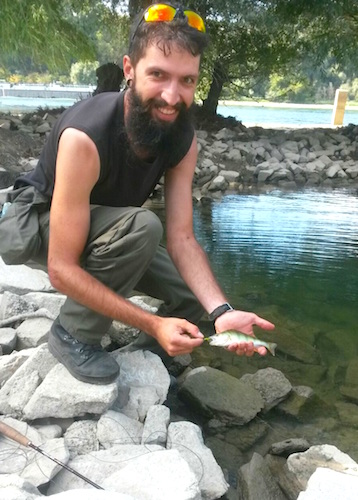 In September I could look back on a couple of decent-sized grayling up to eleven inches, but no trout of similar size. Had they all been taken by other anglers? A friend came to town, and since he was also in an intermediate-beginner-state of fly fishing and had never caught a grayling, we went to the local creek to catch some. And guess what, we didn´t catch any grayling, but trout!

So it happened that I caught my first “grown-up” trout, just a bit shy of twelve inches! At the end of the day, when we were on the way back to my place, we spotted this trout chasing some small chub around. All it took was one halfway decent cast with a streamer, and the trout hit it like it slapped her mom.

You guessed it, happiness! 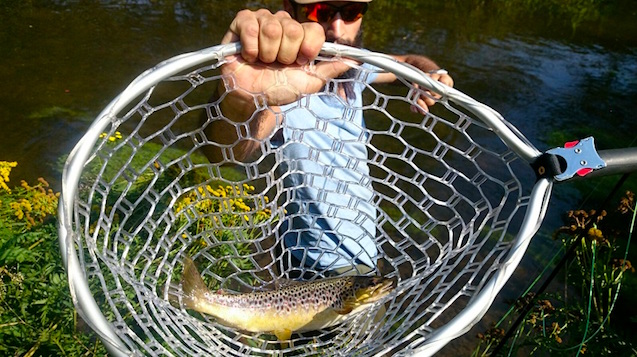 Soon it was sea trout time again, two weeks of camping and fishing as much as possible. And I just caught two crabs (yes, crabs!), until I hired a local guide for the last day of my vacation. And then I finally was able to hold a small sea trout in my hands for a brief moment, before I let it go again.

And the promise to be back again  next year.  But with a good pair of breathable waders and maybe a slightly lighter rod, since I had suffered quite a lot in my PVC waders and trying to cast the 8wt all day. 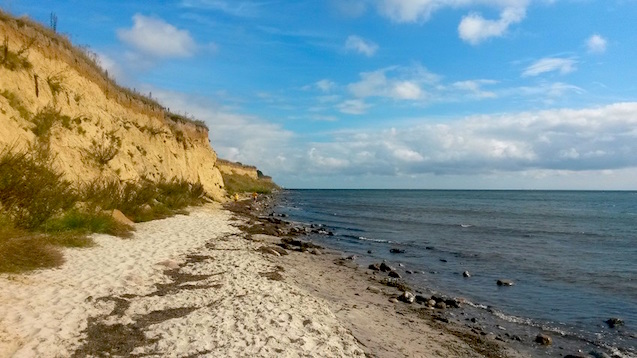 As I mentioned in the beginning, my 5wt isn´t the best rod in the world and felt a little overkill for the creek, so I started looking around for something lighter. And since a friend of mine builds his own rods and since I find great fun and satisfaction in  building stuff, the decision was made to build a 4wt. And what a pleasure it was when a couple weeks later my self-built rod had a serious bend in it as I caught my biggest grayling so far. Unfortunately, that day I had decided that the smaller one of my two landing nets would be sufficient, and I had quite some trouble to keep fourteen inches of grayling in the net whilst trying to get a quick photo of it. Needless to say, the pictures turned out horribly.

The rest of this year went by way too fast, and with work and bad weather keeping me away from the creek, there wasn´t much else to do as to tie some proven flies and, just for the fun of it, build another rod. A nice little 2wt for summertime roach and rudd.

So what´s the summary? It isn´t as easy as it looks, but not as difficult as many say. I learned how to cast and I am still learning, I broke one rod, but I made two rods myself, learned a lot about fish, fishing, insects, nature, and about myself, and I met quite a few great people on the way.

Next year I will continue, since there are so many fish to catch, places to go, flies to tie and things to learn. To me it seems fly fishing is endless.

This is just the beginning.

Oh, and I need to find new homes for my spinning rods…