Andrew Gibson takes us to his home water, the Coquet

We really are fortunate in Northumberland, that we have some of the finest game fishing rivers in the country. With rivers such as the Tyne, the Till and the Coquet on our doorstep, it is no wonder that there is a long established tradition of fly fishing woven into the heritage of Northumberland. 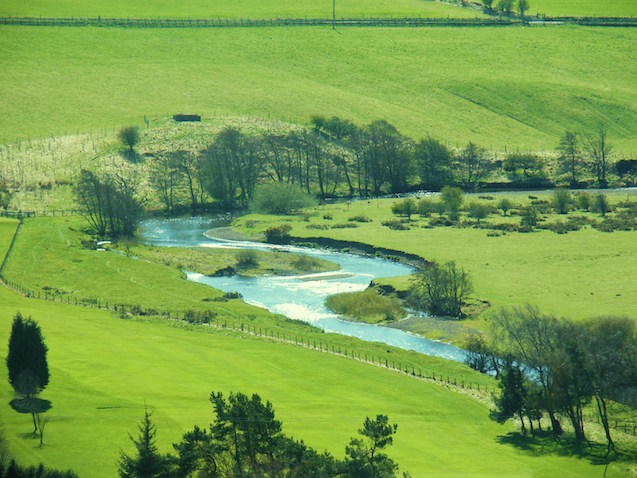 The Coquet Valley upstream of Rothbury

With its source high up in the remote Cheviot hills, the winding waters of the River Coquet flow through some of the most spectacular scenery in the land before exiting into the North Sea at Warkworth. Along its 40 mile length, the landscape through which the waters flow varies from sparse heather clad moorland, lush water meadows and deep wooded gorges which rarely see a visitor. 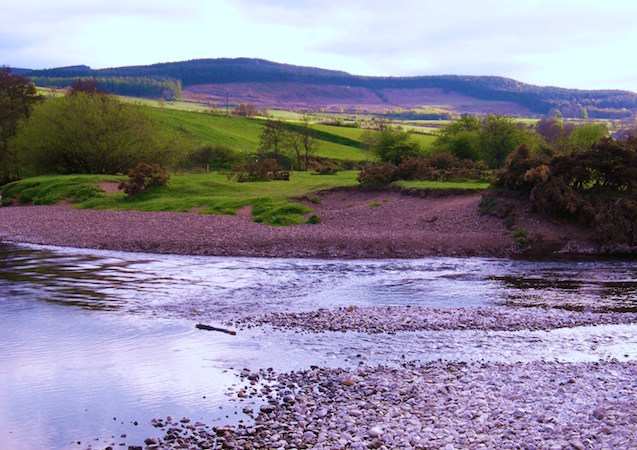 The River Coquet with the hills of Simonside in the background

There are some that believe fly fishing for river trout is a life long journey to a distant destination that that has never been reached. The whole point of the trip is not to arrive; there is no set goal other than to simply enjoy the journey along the way. For this fly fisher, there can be no finer stretch of water on which to enjoy this journey than the middle stretches of the Coquet Valley, particularly that upstream of Rothbury. Spending the day fishing for river trout here, will immerse the angler into an ancient landscape that has changed little over the centuries. The river has the feel of an upper mountain stream where the pure cool waters tumble over the gravel and rocks that form the bed of the river. Throughout the summer months, the sandmartins that arrived on our shores in the late spring will be skimming the surface of the river in search of flies, whilst the flash of electric blue is all that you will see of the resident kingfisher as it goes about its business. The otter population in Northumberland is on the increase, and on some quieter stretches of the river, the patient angler may be rewarded with a glimpse of this shy creature. Armed with only a fly rod and a few flies, many fly fishermen become so absorbed in the pursuit of brown trout in this environment, that the normal passage of time seems to stop. 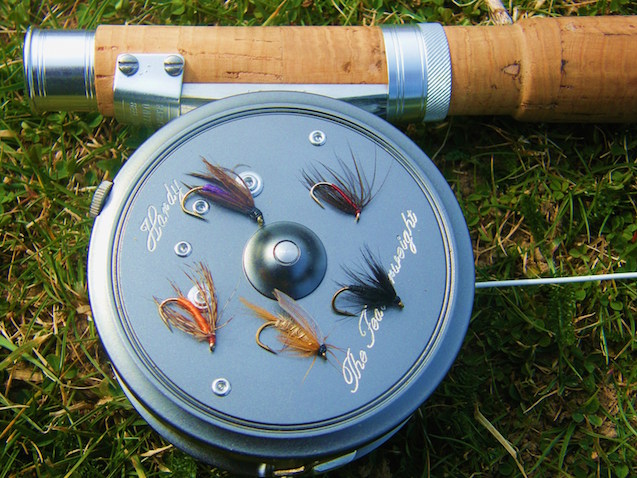 A selection of the flies for the Coquet, sparse northern spider patterns always fish well on the river

No two days spent fishing are ever the same, but each day spent fishing on the Coquet offers a unique opportunity to collect memories which are warmly recalled during the closed season. On such a day last year, the weather had been unseasonably cold. The backdrop of rolling the hills surrounding Coquetdale were hidden under a shroud of mist, masking the path of the rain squalls as they rolled across the valley. I had spent the morning walking the river bank, pausing at favourite spots along the way to cast my fly at any sign of a rising trout. The fishing had been as expected, slightly slower than other days, the thrashing weather keeping the trout close to the bed of the river. On the upper reaches of the river, wild brown trout choose an opportunistic existence, feeding aggressively on any passing insects trapped in the surface film as they pass overhead. Despite the poor conditions, I had managed to bring several of the native wild brown trout to the net, tempted by a “black spider” before deciding to call it a day. 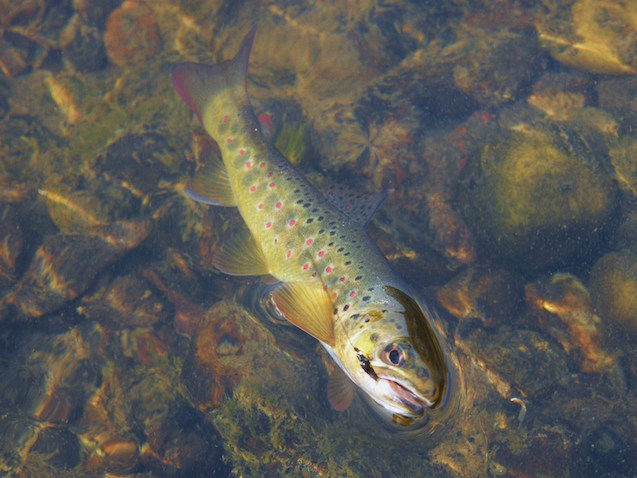 It took me a good half an hour to walk back to the car, by which time the clouds had started to part and the sun started to beam through, warming my damp clothing. On a normal fishing day, I tend not to work to a set schedule, rather letting the natural rhythm of the day define how events unfold. With no reason to rush home on this day and with the weather improving, I decided to keep walking, leaving the car behind me once again as I continued upstream.

The sun was getting stronger, burning away the misty clouds above, changing the countryside from a blurred watercoloured landscape to a vivid sea of green and blue. By the time I reached the pool I was intending to fish, the temperature was starting to rise and the surface of the river was alive with dimpling wild trout springing from the shadowy depths of the river at any winged morsel that drifted overhead. 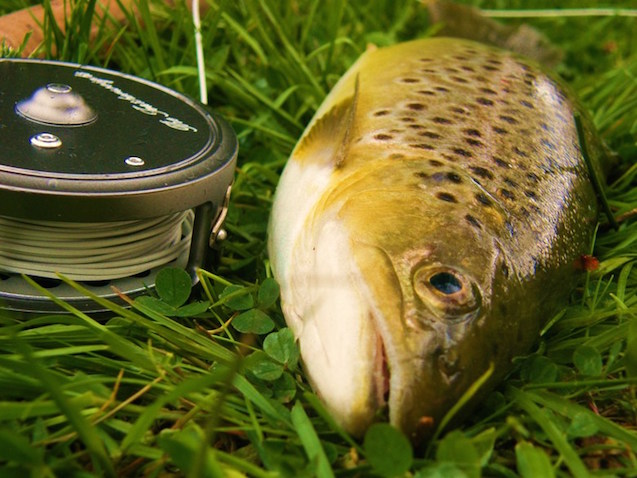 Whilst I had fished this pool some years ago, I had largely overlooked it in recent times favouring stretches of the river where successes were fresher in my mind. Before pushing further upstream, I decided to spend a little time offering a fly to the water. With the air now still, a squadron of sand-martins had moved onto the pool, darting across the surface of the river with an agility that can only be marvelled at. It always intrigues me how accepting wildlife can become when an angler stands quietly in the middle of a trout stream.

I started casting my fly down from the head of the pool, and after half a dozen casts or so, my rod doubled over as I enjoyed the spirited tussle of a nine inch brown trout. After a quick photograph for my diary, I returned the fish to its watery home and moved down the bank. 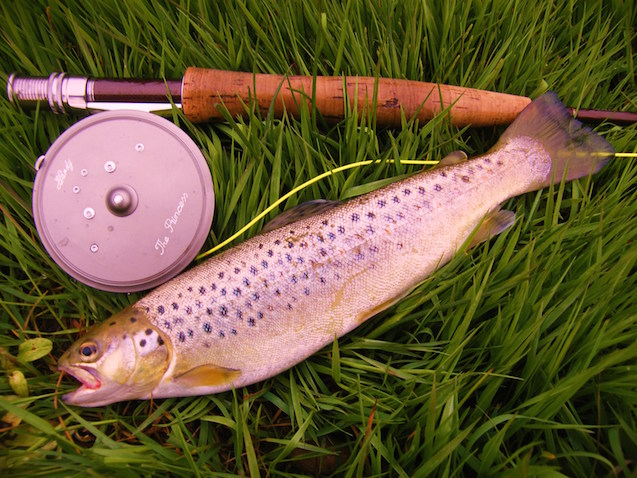 This far upstream, the river is relatively fast flowing, tinged the colour of single malt whisky, or black tea if that’s your preference! I have found that it normally takes a lot of rain to add any significant colour to the river and even after the earlier rain, the river was still running clear. At times such at this the boundary between water and air becomes hard to define and the trout seem to have the ability to simply disappear from the pool of the moment.

After a further ten minutes of continuing to cast my way through the pool, my rod bucked once more. This fish was different to the previous one however. There was no rhythmical jabbing on the end of the line, this fish hugged the bottom of the river bed and fought with a series of slow lunges across the full width of the pool. The through action rod transferred every lunge of the fishes' head through me as it plotted its bid for freedom. After several minutes of applying steady pressure, the runs of the fish started to shorten and he started to succumb to my side of the tussle. After one last ditch lunge, the fish was netted and I carried it up the bank. In contrast to the subtly coloured landscape around me, the now bright sunlight intensified the copper coloured flanks of the fish too, exaggerating the rash of black spots across its side. At a shade under 16 inches, it wasn’t the biggest brown trout in the world but it was certainly my biggest of the season from the river. 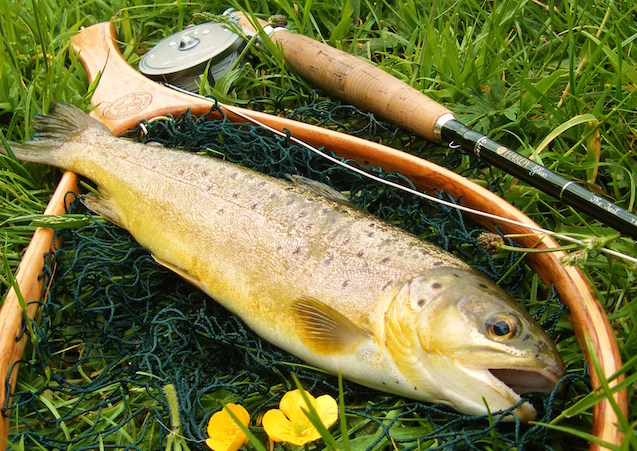 With an estimated weight over 2lbs, it was my biggest brown trout of the season.

I held the head of the fish facing into the flow of the river until the signs of life started to pulse through its flanks. Having watched the fish swim back to the watery depths, I decided no further fishing was required on this day. Bathed in the tranquillity of a golden Coquetdale sunset, I walked slowly back to the car already wondering when I could next return to the river. 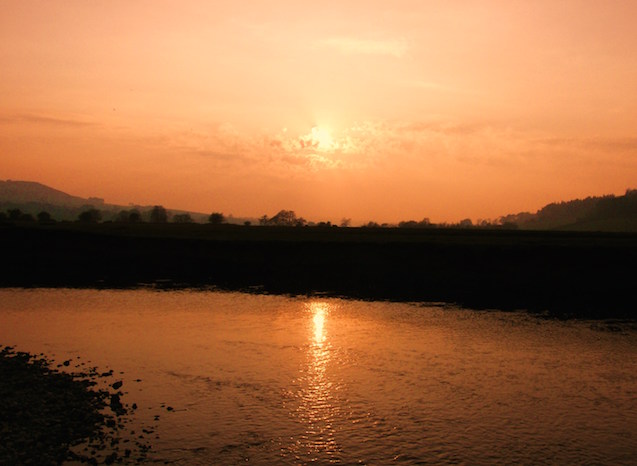 The sun sets over in the Coquet Valley, upstream of Lady's Bridge.

Postscipt: Much of the fishing on some of the most scenic and productive stretches of the river Coquet is controlled by the Northumbrian Anglers Federation (N.A.F.). Local anglers can obtain reasonable priced day and season permits directly from the N.A.F. or from local fishing tackle shops.