There’s something I really love about fishing a small stream. The intimacy, the accuracy the stealth. They are all things we can get away with to a certain degree on a larger river but when you are fishing up close there is little room for margin.

To me, the smaller the stream is the better. There often isn’t room for long elegant casts, you have to make do and at times improvise. There are times when you have to figure out how the hell you will get your fly to the fish and also think how you’ll strike in the event of a take. I will often play out the strike before I’ve made the cast so that if there is a fish where I’ve pitched my fly I already know that a low side strike will set the hook. I was fishing Wellow Brook just outside Bath with my friend Vince. I’d fished there some 4 or 5 years ago and although I’d really enjoyed myself I left feeling I’d not really done it any justice. It had taken some time but I was back, it was raining but the river was in good shape and I’d just made my first cast.

I was singing quite loudly as I started. It was all Vinces fault. He’d told me the village where we’d parked was the home of the Wurzels. “I’ve got a brand new combine harvester” I sang as the trout took. 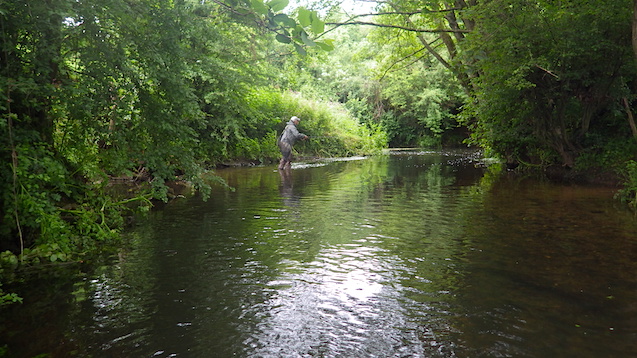 I heard Vince shout his approval from just behind me. I was underway.

I shot a quick look at the pretty trout of 6 or so inches, shook the hook and it was away.

This was the section of river Vince had wanted to take me to on my last visit but we’d run out of time. He’d told me it was his favourite. 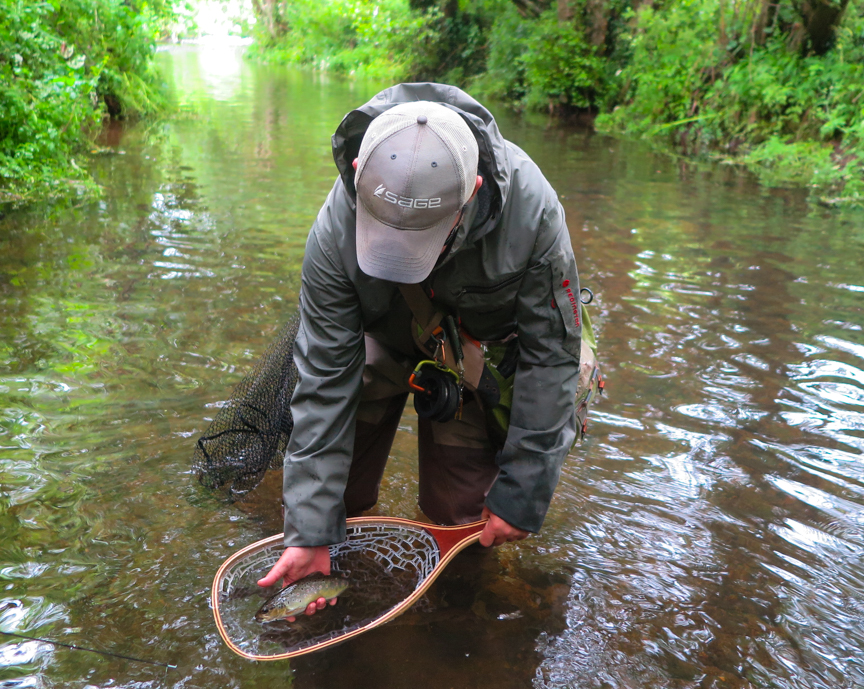 Ahead of me the river made a slight left turn as it hugged the bank  sending the current out into the middle of the river allowing a relatively easy side cast. As I’d just had a fish I offered it to Vince. Not because it was an easy shot just that it was his go. He was in full host mode though and told me to carry on.

The cast I needed to make allowed me a little more room to I pulled a few more feet off of my reel and cast. The fly landed right in the middle of the run and drifted down unmolested. I grinned at Vince as I think we were both expecting someone to be home. I made one more cast just in case and after another drift I moved up the river a little. It didn’t feel as though there was a need to fish the small pools hard as if the fly were in the right spot and a fish was feeding the chances were it would take.

Vince had told me that it was the perfect place for small rods but I don’t really have any. I was fishing with an 8ft 2” 4wt. I have the same in a one weight and although I was fishing just a dry I wanted the heavier line weight in case I needed add a nymph in some of the deeper pools. 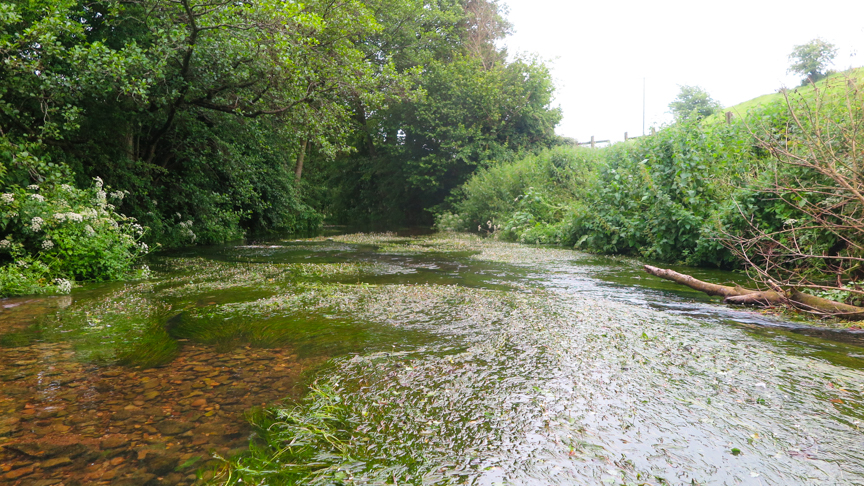 After I’d last visited the Wellow there had been a serious pollution incident. 150,000 gallons of slurry had washed into the river and surrounding land when a slurry store had failed at a farm nearby to the river. The farm made a £5000 donation to Bristol Avon Rivers Trust but of course, damage had been done.

Since then though the river has bounced back. I saw plenty of weed growth in the river, mayfly hatching and trout too. Vince told me that the Wellow is never a venue for large numbers of trout even before the pollution but they are there. 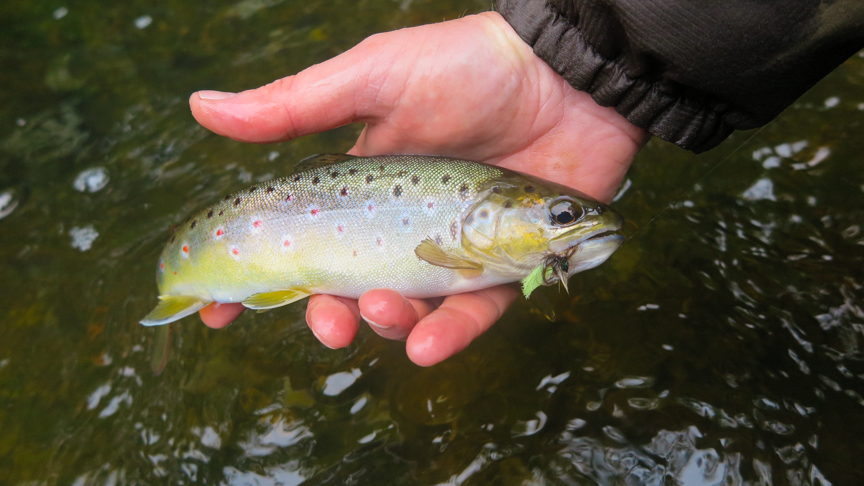 The next pool was deeper and had a perfect seam to fish down the left side as I looked at it. I’d decided to make a couple of casts with the dry and if nothing took hang a nymph below the dry. Although only table top in size it looked about thigh deep and the perfect place for fish to hold. The dry was ignored and so I tied 3 feet or so to the bend of my dry and added a 2.5mm tungsten beaded nymph. It was just a generic black nymph. I was close to the pool as there wasn’t much by way of room but I’d felt that the depth and the broken water would make the fish feel secure. I was high sticking the flies allowing them to dead drift and then on the next cast adding some movement to them. I made 3 drifts and decided I needed to fish a little deeper and so changed to a heavier nymph. Straight away the dry dipped and I struck.

It is something I often get people I am guiding to think about when we are out on the river. It is worth investing some time and patience into adjusting your set up to improve your chances of success. On this occasion it had worked. 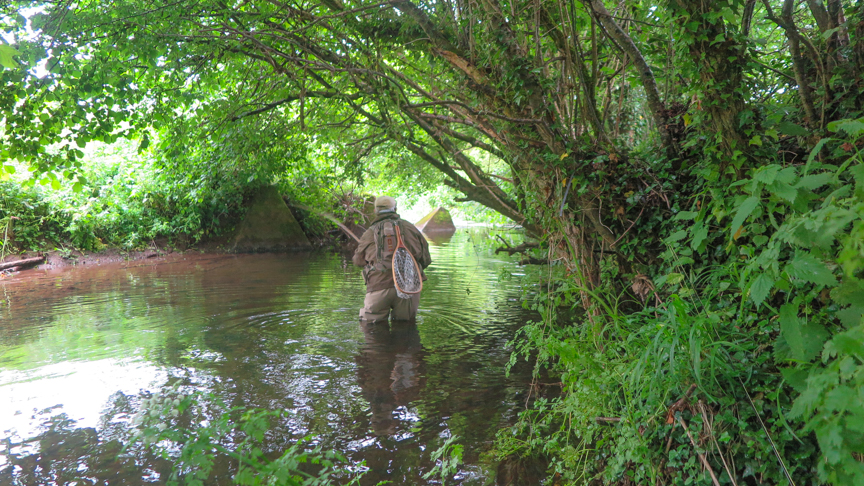 The next pool was flatter and slower and so I snipped off the nymph preferring to fish just a dry but left the nymph and tippet on my fly patch so that it was ready for a similar situation.

Vince is left handed and so I offered him the pool as it looked perfect for him. This time he threw off the hosting shackles and edged into position.

He’d been having a lot of success with an unweighted nymph on his last few visits but had seen trout were showing an interest in my dry and tied one on himself.

I had my camera ready as I think we both knew there was a fish where his fly landed. there was but I was far too slow to record the event but Vince set on the fish.

We carried on up the river with me getting far too many of the best pools thanks to my generous host. We caught fish and I really enjoyed myself.

Wellow Brook isn’t the place for number counters or big fish hunters, although I am sure they are there, I did get broken by something that felt sizeable, but if you like challenging fishing in a wonderful setting then this will be the place for you. Vince told me that the club has some vacancies and I know if I lived in Bristol or Bath I’d join like a shot. It was good to see the river is such good health given everything that had happened.