Ever get the feeling you're being watched? Kris Kent does

When Luke Bannister recommends a beat, you should heed his words. Luke is a good friend, a superb cane rod builder and one hell of a fisherman. I fished the Tamar with him at the end of the season and whilst we were chatting he mentioned a new beat on the Wye & Usk Fishing Passport scheme. He said it was well worth a visit. A month later I was in Wales staying with Denise. For a change the weather was quite settled and the forecast looked good. Denise hadn’t been fishing since her trip to the Pyrenees and I’d had a bit of a thin time of it on the fishing front of late so we were both keen to get out. I mentioned the beat Luke had recommended to Denise and she was up for it, so I booted up the laptop, signed into the Fishing Passport website and booked the beat. All very simple and straightforward. 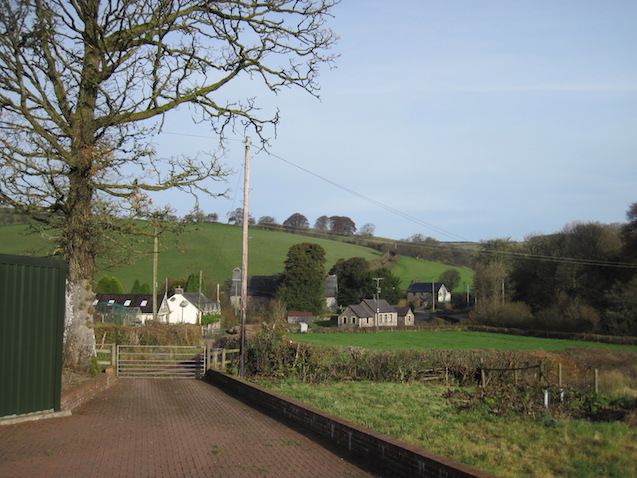 Lifting the blinds I found the morning bright and sunny. Hardly a breath of wind stirred the trees on the opposite side of the valley. It was looking good. 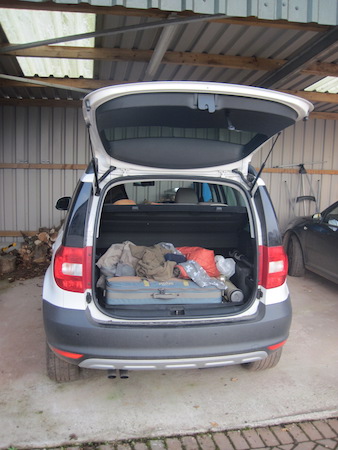 Loaded and ready to go

After a hearty breakfast I transferred my gear into Denise’s Yeti whilst she prepared some lunch and a flask of coffee. To get to the Irfon Denise has two options. The short route takes you over the Ministry of Defence training grounds whilst the long route takes you via Builth Wells. You aren’t supposed to use the MoD route, this doesn’t stop Denise. So, we took the short route and ended up dodging soldiers in full battle dress out on manoeuvres.

The Colonel’s Beat was on the outskirts of Llanwrtyd Wells about half an hour from Denise’s. The Wye & Usk Fishing Passport beat maps are excellent and we easily found the parking space a short walk from the Irfon. Denise and I must have looked like something from an Orvis Fishing Catalogue as we climbed into our Silver Sonic waders and matching wading boots.

The beat is about one and a half miles in length and the path brings you out roughly mid-way. We decided to walk down and then fish back up. The beat is very varied; long glides, fast runs, sweeping bends. It appealed to me as a river collector because it also included a length of the Cledan Brook, two rivers for the price of one. We didn’t manage to reach the bottom of the beat before the urge to fish kicked in, plus a rising fish peaked our attention. Denise was already rigged up, so she dropped in whilst I strung up my rod. There were a few stonefly on the wing, so I suggested an F Fly and Denise, unusually, followed my advice. Excessive enthusiasm often means that one fluffs the first cast to a rising fish. Denise made the perfect cast and dropped the fly just ahead of the rise but when the fish took the strike failed. Seemed like a good time to leave Denise to it. 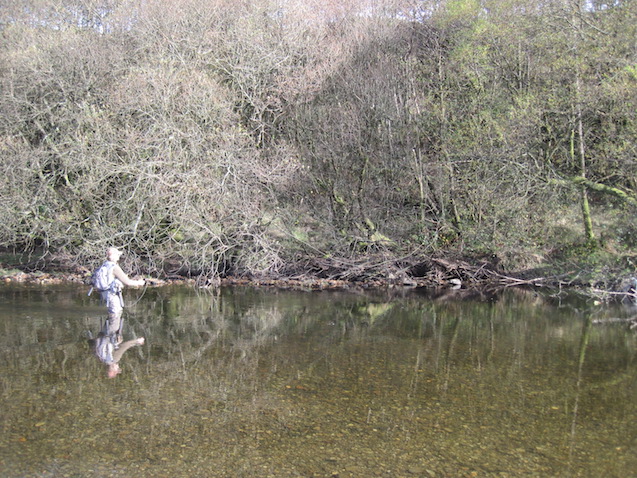 By inclination I am a dry fly fisherman. I love the elegance of the cast, dropping the fly like thistledown on the water, watching the fish come up to the fly, the take. But I recognise that often this method will not be productive. If there are no fly on the water and the fish aren’t rising it might be time to try something different. Winter fishing on rivers like to the Irfon demands a grasp of a number of different techniques: dry fly, wet fly, spiders, streamers and nymph, depending on conditions and hatches. Of all of these it is nymphing that I feel the least confident about, particularly what is often referred to as modern European nymphing – actually a range of different techniques. I’ve been lucky enough to fish some of these technique with the likes of John Tyzack, Pete Tyjas and Lewis Hendrie and talked about it with the young guns of the sport such as Alex Jardine and Oscar Boatfield. I’ve read books by the likes of Jeremy Lucas and Jonathon White, but I still don’t feel I’ve cracked it. 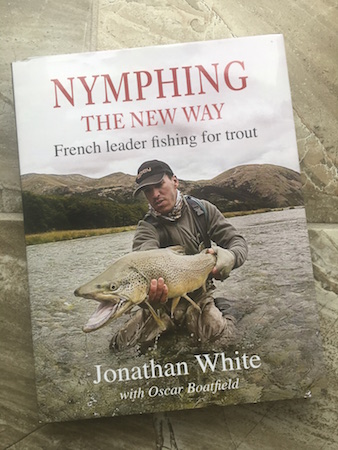 Nymphing, The New way by Jonathan White and Oscar Boatfield

They say, “practice makes perfect” and this seemed like the ideal opportunity. With this in mind I’d put up an Orvis Recon 10’ 3wt rod teamed with a Hydros II reel. This American-made rod was developed with input from Orvis UK fishing specialists to compete with the likes of Hanak, Hends and the Sage ESN. Specifically designed for the demands of European nymphing. According to Orvis “Ultra-sensitive tip protects light tippets and offers superior strike detection. Super light swing weight. 10-foot length offers excellent reach and line control for tight-line nymphing.”  Time to put it to the test. 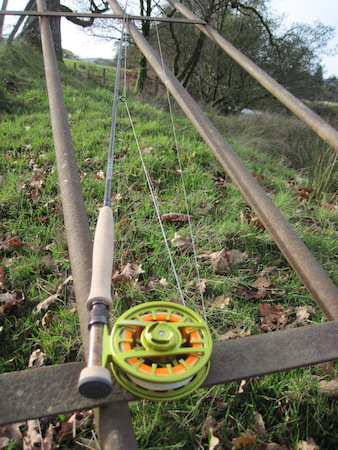 Leaving Denise behind to fish the big bend with a dry fly, I went in search of promising water. Walking back upstream I was looking for long pools with steady depth, a gravelly bottom and good flow. Ideal grayling water. There was no shortage.

I’ve tried a lot of nymphing leaders over the years. With the river low and clear I decided a French leader would give better presentation. These long tapered leaders mean virtually no fly line is used. I like the Fish On leaders that John Pearson ties but on this occasion went for a Rio Euro Nymph leader that I’d seen Pete Tyjas using. I added a length of tippet to the micro ring and tied in one dropper. Sitting on the high bank I stared into the water and then into my nymph boxes for inspiration and went for a small dull Goddard’s Hare's Ear for the point and a glitzy orange shrimp, tied by Matt Eastham, for the dropper. 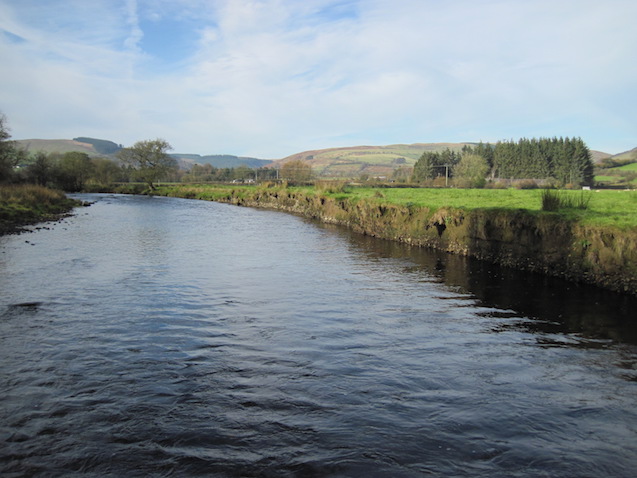 I dropped in at the tail of the first promising pool. Despite the low water the current was strong, and I nearly lost my footing. Edging across into the shallower water off the current I lobbed the flies into the flow ahead of me. This casting wasn’t elegant, at shorter ranges little more than a lob. The aim was to get the flies to hit the water first, ahead of the leader, with some slack in the cast to allow the flies to descend as naturally as possible, drag free. Then it was a case of watching the inline indicator for any signs of a take. Pete Tyjas had beaten it into me that any indication should be tightened in to, with a strike at the end of the drift as you lift into the next cast. At shorter ranges the indicator cuts through the surface with no leader on the water, at longer ranges the indicator and leader will sit on the surface. 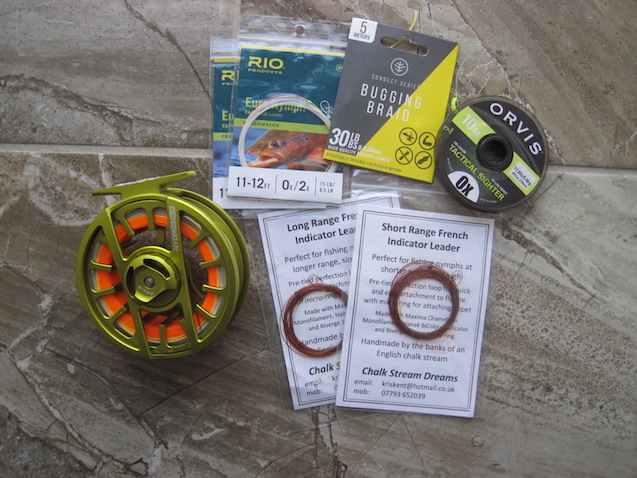 As I worked my way up the pool the water deepened a little with the faster water on the true left bank opposite me. I fanned my casts from mid-stream across into the faster current and right across hard up against the opposite bank. After what seemed like a long time the indicator finally jagged forward and I was into my first fish. It was a nice grayling that had been sitting on the seam between the slower, shallower water and the deeper, faster water. It used the current to great affect resisting my efforts to bring it in quickly. I remembered John Tyzack’s advice to keep the rod tip low over the water when you fight a grayling. They seem to prefer being drawn horizontally through the water rather than hauled vertically up. It worked, and the fish swam up and into my net good as gold. It had taken the glitzy orange shrimp on the dropper. In fact, all the grayling that day took the shrimp. 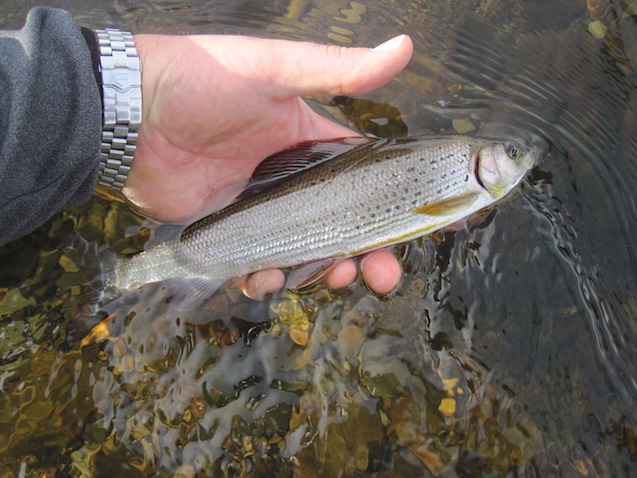 As I released that first fish I became aware I was being watched, but by whom? I checked around to see if Denise had caught up with me, but she was nowhere in sight. I looked up and downstream to no avail. It was the mewing and the croaking that gave them away in the end. High above me a buzzard circled staring down. It felt like it was looking at me but in hindsight I think it was more interested in the dead sheep I would discover some little way upstream. My other observer was a pair of ravens that flew from tree to tree behind me. I couldn’t get a clear look at the them, but their deep throaty croaks gave them away. Apparently, they are quite common now. 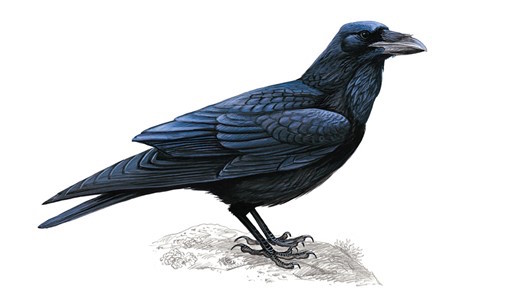 Later I became the source of much curiosity for the herd of Herefords grazing the fields adjacent to the beat. Luckily the banks were too steep for them to come in and check me out.

As I sat and drank my coffee and nibbled on the Snickers Denise had insisted I take with me I noticed some stonework perched up in the field above me. I wandered up and found the remnants of a cottage tucked into a steep bank, a large tree standing sentinel over it. It was a lovely spot and I wondered who used to live there. 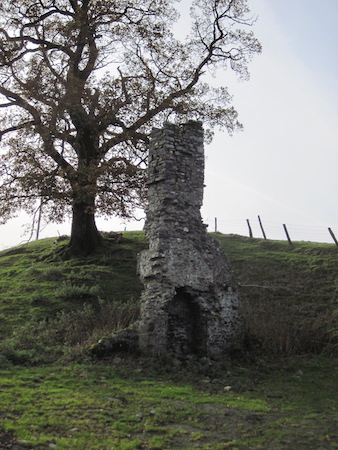 I was roused from my dreaming by a Tornado jet screaming past low over the river.

Denise caught up with me as I emerged from the Clenad Brook. A good length of this tributary comes with the beat. I didn’t catch anything, but I did find the dead sheep the buzzard and ravens were interested in! Denise had had some success on the dry fly and we both agreed that it was a beat that warranted further attention. We strolled back across the field doing our best to avoid the Herefords whilst we shared tales of the fish caught. A lovely day and a great opportunity to hone those nymphing skills. I’m still not sure I’ve mastered the techniques, but my confidence is building.

The Colonel's Beat is available through the Wye & Usk Fishing Passport:

If you would like to try out the Chalk Stream Dreams French Leaders check out their Facebook Page: