We join Duncan Bamford in search of chub on the fly

I stand in the bright sunlight, high above the lake. Squinting my eyes, I look for rings in the dazzling reflection, blue sky above, a glassy stillness on the water. High summer, and a high pressure has settled over Wales. A sheepdog barks in the cattle shed further up the track and I can hear the rumble of a quad bike somewhere over the hill. To one side of my wading boot the black slick of a wet cowpat (narrowly avoided), below me a boggy field, ending in tangle of old willows, and beyond lies a small lake, a lake full of trash, but no shopping trolleys here! Is there anything rough or trashy about these handsome, broad-shouldered fish? With an array of large golden to silver scales, big fins, large golden eyes and the sort of lips... hrmph! In short, beautiful fish, in a beautiful setting - with a huge diversity of plant life, invertebrates and shopping trolleys full of solitude. Unusually in this water the fish is the humble European chub, and only chub, chublets and more chub, and lots of them, and I'm not complaining. 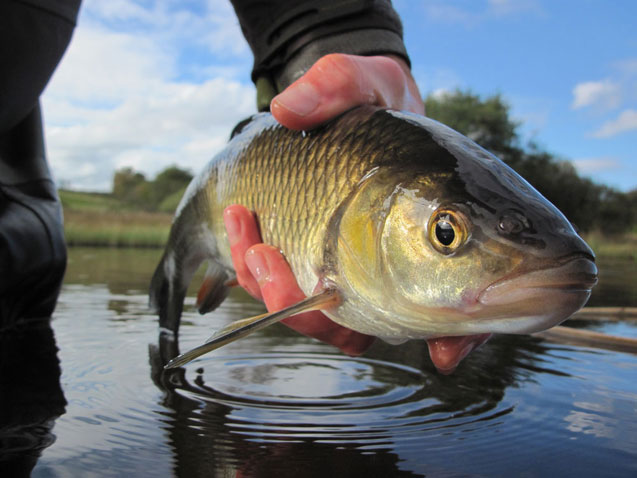 Expand your mind - in this water you can fly fish right through the winter, and even in sub-zero temperatures still find some feeding fish. In spring, summer and late into autumn the chub are free-rising, and will confidently suck down a large beetle or sedge, and sip a dainty gnat with the best of them. When the rivers are chocolate-brown and bursting the banks in the high flows of winter, no more grayling blues, just head to the brimming stillwater where perseverance and a nymph or lure, twitched back a couple of feet down, will have the line wrenched from your fingers, and you can again scratch that itch. 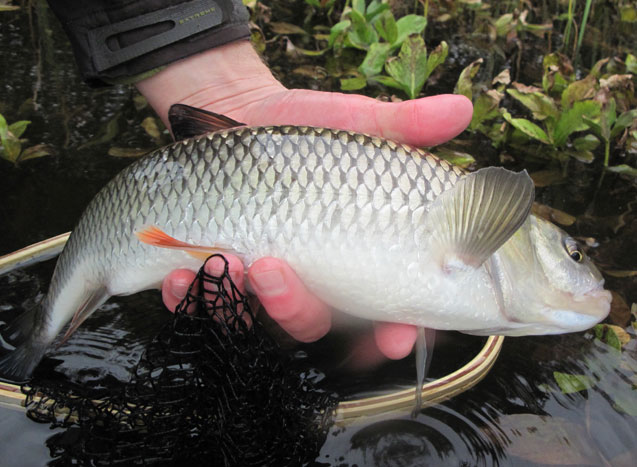 Perfect wild fish with beautiful scales. They don't get much better than this

However much I enjoy this lake in the bleak mid-winter, it comes into its own in the heat-haze of summer. A bright still day, like today, and trout are stewing in the depths elsewhere or hiding under a riverbank, here the 2-3lb chub will bask in shallow and ludicrously warm water, sunning themselves. The insect life is literally humming, a soup of nymphs, leeches and freshwater shrimp in the water. Gnats, mosquitoes, midges, sedges, beetles, dragonfly and damselfly on the surface, and amongst all this food there are the chub. They are rarely picky, and at this time of year you can get them on pretty much what you like - a small popper, deerhair sedge or a dry damselfly, but generally it pays to go big, or if you feel the need to go subsurface you can get them on an outrageous lure or a drab olive nymph - it's entirely your choice.  In summer the lake just goes loopy and smells really funky, like a jungle swamp, and the fishing is incredible. 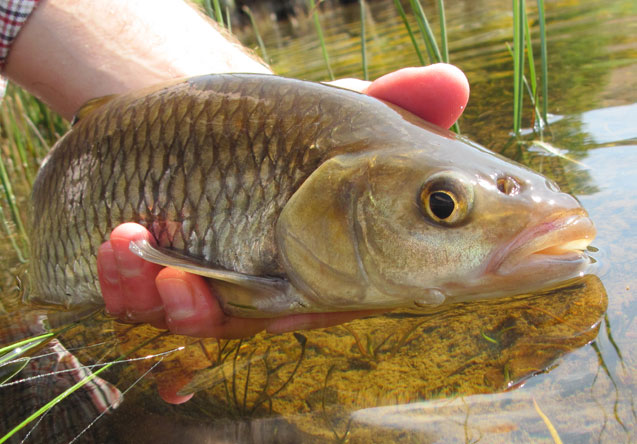 From the warm shallow water in mid-summer.

Stalking fish in the clear water, you find them hanging motionless in a shallow bay or lazily following the drifting damselflies in and out of the bogbean, slurping down a morsel when they feel like a light snack. Cast your fly within a foot, and watch as the chub turns and with an imperceptible flick of the tail, drifts up to the fly, like someone returning to the buffet for the fifth time - not exactly hungry, but they might just have a little bit of something if it appeals. You wait, transfixed, and watch the slow tilt of the body and finally the big mouth opening. The big vortex appears, and the fish drops down emphatically, the fly is gone. 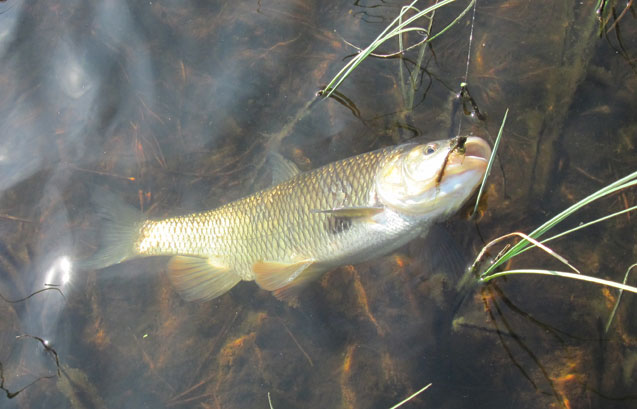 The foam wasp will also work.

Some of my most pleasurable and memorable fishing days have been spent on the banks of this small stillwater, catching some fish, observing their behaviours and the surrounding wildlife. On a still day in early March, we located a huge shoal of fish 10-40yds off the bank at one end of the lake.  A shoal of at least 60 or more, maybe over 100, probably averaging around 2lb. Not feeding fish, but fish beginning to think about spawning in the months ahead and checking out the competition. An errant cast from my side caused the whole bay to boil like a stock pond at feeding time. Luke (of Coch-y-Bonddu Books) created a similar disturbance from his side of the bay. After a few minutes calm, realising there was a serious density of fish ahead I gently cast a nymph to the fringes of the shoal, just visible through polarizing lenses in the reflected shadow of some aged willows. I then had a grandstand view as a handful of 2lb chub broke away and dive-bombed the fly as it dropped through the water, one outpaced the others, nailing it just as it reached the bottom. After bringing the first fish to hand a few more followed in similar fashion before the shoal moved away to deeper water. 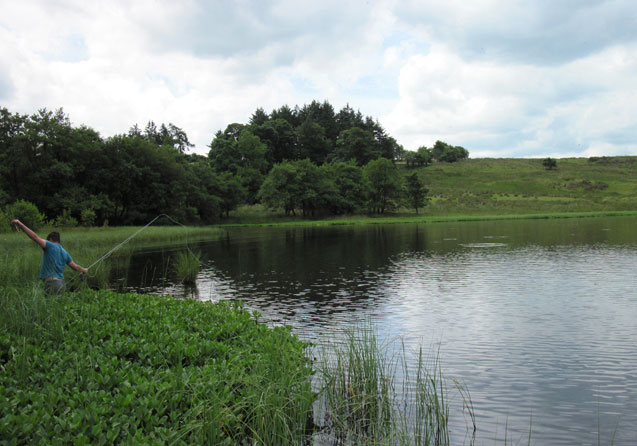 Matt improvises a dance routine whilst trying to get a clear cast at a shoal of dimpling fish. They were on some small black gnats that day. He did get a couple...

Many times I've cast to a cruising fish in a few inches of water, where as the hook sets, the chub, in the characteristic first 'dive', but deprived of any depth, has skipped over the surface for several metres, like a tail walking sailfish in miniature, before the dogged fight begins and with luck, ends in the net, or in the floating raft of bogbean I'm teetering on as a casting platform, where I peel back the weed to reveal another lump of silver and gold. 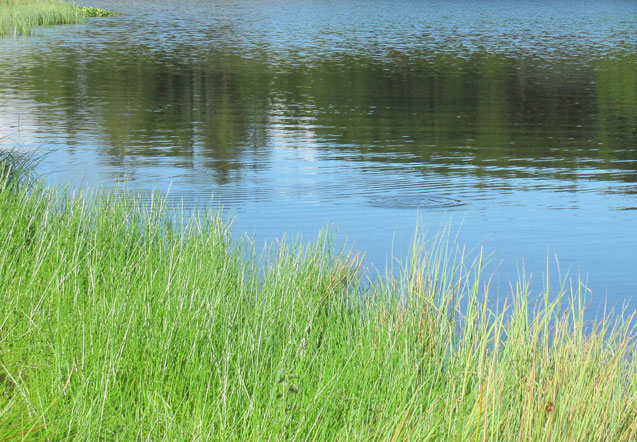 On this summer's day, I hold the tippet in my hand as I walk down the field, wondering what fly will be on the water when I reach the bank. I hurry over the low fence, under the drooping willow branches and through the small feeder stream and down to the waterside. Immediately there is evidence of fish. Not just the telltale rises, of which there are plenty, but some nervous water indicating a shoal, and also a subtle whispering of a dorsal fin on the surface just near the bank. As I stand in shirt sleeves and feel the already hot sun on my back, the air humid and full of buzzing life, I'm thinking of Boxing Day. The sleet was slamming into me, pressing my coat tight, so I could feel the cold seeping through the shoulders, creeping water trickling down the inside of the neck. Out there in the slate-grey chop the chub were feeding hard and ready for whatever I could throw at them, slamming into lures as I retrieved in short pulls, challenging numb fingers as they powered away in the icy water, line slipping out in short bursts. In humid, but relative comfort I pull out the fly box and select a big deerhair sedge, tied on #10 or #8 longshank wetfly hook. It's a fly that does the business at 11pm on a small trout lake nearby, with an early summer hatch of great red sedge, and when it lands with a plop it always gets the chubs' attention... 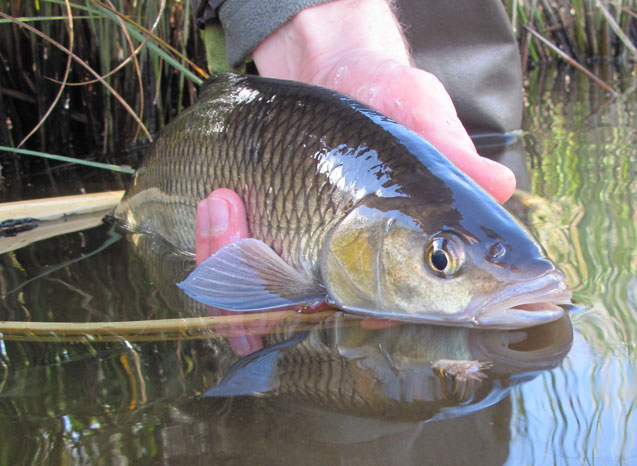 The fly in the foreground - a big load of spun deerhair on a heavy wet fly hook. Sometimes life is simple.

Bringing fish to the net here can be comical. There are numerous snags that the chub will dive for, sometimes embedding themselves in weed, but with their tail waving to show you where they are.  At times it is a treasure hunt. You just have to wade out and net the whole lot in one and start unwrapping your present. Sometimes fish will make a break for it right towards you, shoot between your legs and finish their run 10yds behind you, running under the floating weed-raft and out of sight. You teeter your way back there and start ferreting around for the leader, follow it to the fly, usually found wound around a stem. Sometimes the chub is still attached. It pays to fish a sturdy 8lb tippet, and chub aren't leader shy. 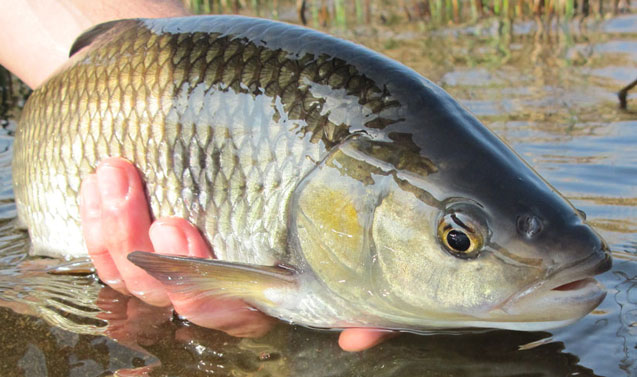 Some serious meat on this one.

Chub are famously shy, and wary of anglers, but my experience of stillwater chub is that they are no more wary than trout. In fact you would rarely see a trout cruising past your legs in a stillwater, and certainly not basking so close to the surface in calm conditions, relishing the sun and warmth and wide open to aerial predators, and the anglers well placed fly. Getting close to these fish is fairly easy, apart from the challenges of a floating mass of reed, bog bean and moss that is your 'dry' land. It's all too easy to put a foot through the surface and suddenly you're up to your waist and there is a cloud of thick mud billowing out from beneath the raft like the pyroclastic flow down the side of a volcano, turning the crystal clear water ahead decidedly murky. 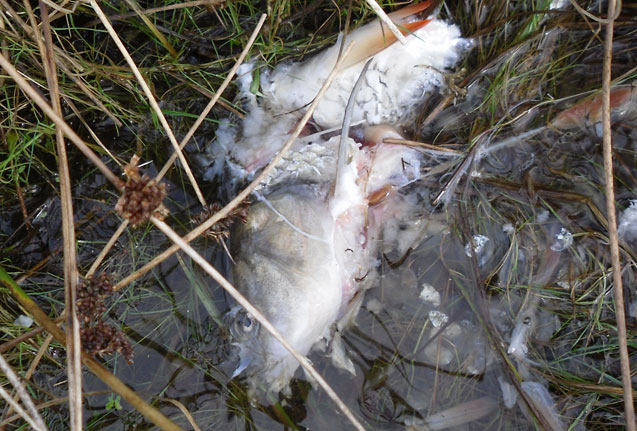 Unmistakable signs of otter. A common sight, along with one or two great crested grebes, herons and the odd cormorant, they keep the population in check.

There are other sights to be seen - the prowling fox, slipping through the shadows of the willow copse in broad daylight, like an elusive memory, ready to scavenge what the otters have left behind from their night-time forays. Piles of large scales in the margins are the otters most obvious tell-tale sign. With the increasingly rare cry of the curlew carrying across the pool, I think of my father who passed a few months ago (pancreatic cancer). This was one of the few places in Wales he didn't know like the back of his hand. A little jewel that he enjoyed visiting, sitting with my mum and watching me fish, swimming when the sun got too hot. Counting the different dragonflies darting through the thistle-strewn fields beside the lake or watching the curlews feeding on the unimproved grassland, with a family of loud young sparrow hawks in the larches. A lifetime spent in conservation, research and outdoor education, but there were still some things to surprise, and he'd never seen a chub that close up before. They both admired the handsome fish, as they have the grayling, bass, garfish and various trout I have introduced them to through the years. Although dad rarely picked up a fishing rod, he understood the compulsion, as I understood his own - the need to just be out there. 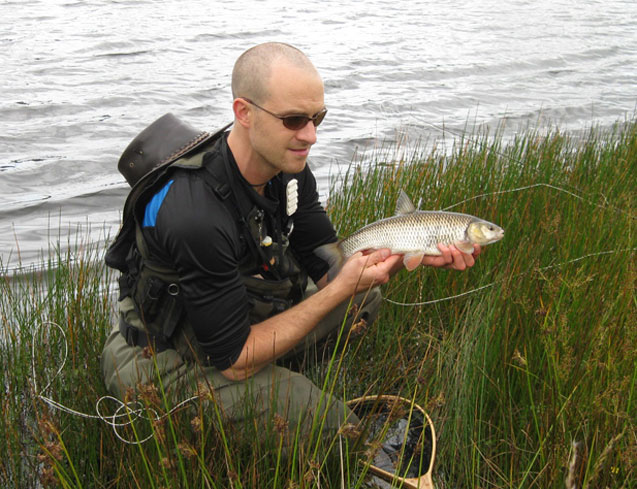 Dad takes a snap of me with a fish whose dorsal gave away its location, even in the choppy water - a very subtle s shape swirl on the surface about 8 yards out. I remember it well. I pointed it out, flicked out the fly and caught it.

Today the chub are up top and rising all over the place. Some big slashing takes to what looks like a skittering caddis are well beyond casting range and make me think wistfully of the float tube at home, but there's always tomorrow, and the next day. Autumn's melancholy tune will be playing before too long, and the summer of bacchanalian excess will be over, but the chub will still be there, just waiting, as will I.

Disclaimer: Photos in this article are from a decade  fishing the lake in question at all times of year, not from one session. I took the liberty of choosing some of my favourite shots and ones that didn't show too many identifiable landmarks...

Duncan Bamford is an illustrator and graphic designer based in mid Wales. Visit www.insightillustration.co.uk for his online portfolio.