Is there a comparision between cricket and fly fishing? George Browne explains why he thinks there is

Reading Ben Jailer’s piece on the “Aussie Index” in the november edition of ESF made my mind turn to a question that has bugged me ever since I first took up fly fishing in 2011. Why do so many cricketers love fly fishing?

The list of famous (mostly ex-) cricketers who fly fish is long and illustrious: Atherton, Botham, David ‘Bumble’ Lloyd, Croft (Robert), Embury, Gower, Hayden, Steyn… I could go on but won’t. But the passion is not only among the professionals. At the club I play for the conversation around the lunch table is frequently of fishing: the fish caught, the fish lost, the amusing anecdotes.

Speaking for myself, I will never forgive my father for turning down a playing membership of the MCC in order to spend more time fishing (for trout on the chalkstreams of Hampshire). For me, cricket has always been and always will be my first love. But when Dad introduced me to fly fishing on a ‘once in a lifetime’ salmon fishing trip to the Spey in 2011 I fell in love with a sport all over again, and my fury at not being able to jump the queue for MCC membership dwindled somewhat.

You see, fly fishing and cricket have a great deal in common. Wait: hear me out.

I hadn’t considered it until I first tried to explain to a non-angler that actually catching a fish is a bit of a bonus when it comes to salmon fishing. They just couldn’t understand the appeal of standing in a river doing nothing for hours on end.

“It is like fielding,” I explained to the patiently bemused listener. Lots of people say that they find fielding boring, but not me. I love it because when I’m out there I’m not thinking about anything other than the game in hand. What’s the batsman most likely to do – is he dangerous or should we attack? Is the ball about to come to me? Am I in the right place or should I be a yard or two to my left or right? 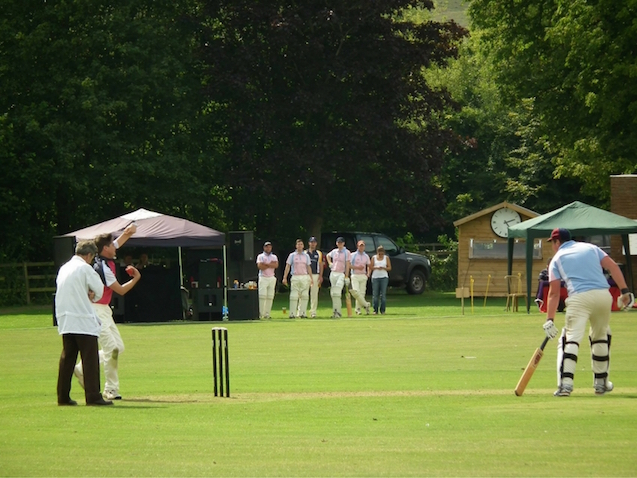 When it comes to fielding it’s the anticipation that’s exciting: the ball actually being hit at you is often terrifying. And so it is with fishing – it may appear that nothing happens for hours, even days at a time, but the point is that for that whole time there was the potential for it to happen. Perhaps the greatest fielder of all time, Jonty Rhodes, said of fielding “I wanted every ball to come to me. Fielding can become hard work, but if you're enjoying it then it doesn't.”

Does it surprise you to learn that he’s also a keen fly fisherman?

Now, anyone who has seen me failing to catch both fish and cricket balls will tell you that I am a long way from being a good fisherman or a good fielder. But the parallels between the two sports run deeper. Consider, for example, the dark art of spin bowling. 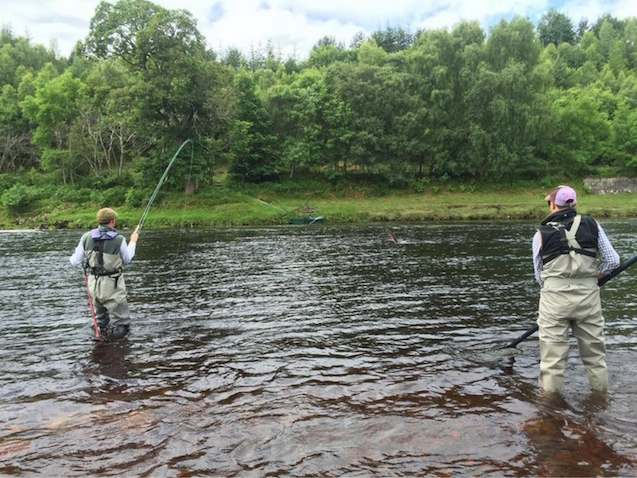 Ever since I saw Shane Warne bamboozle the England batsmen all those years ago I’ve been a leg break bowler. It is a tough gig, requiring resilience of mind and the ability to be metaphorically and literally hit for six and keep coming back, but I like to think that I have developed a certain amount of skill over the years.

Last summer I was on the banks of the River Test on a film shoot for CHALK, and was talking about the trials and tribulations of legspin bowling with Chris Cooper, an excellent filmmaker, keen fly fisherman and former wicketkeeper. Having listened to me moan about how a batsman had taken a shine to my bowling the previous weekend, he said: “Yes, but it must be great when you totally mug a batsman off?”

And I had to admit, that yes, that moment when you can see that you’ve bamboozled your opponent is what makes seeing all those sixes vanishing over the boundary worthwhile. I drifted off, reliving a few such moments from my cricketing past, watching one of the stars of the film cast to a wily wild brownie.

I reflected, as I watched the fish apparently sniff, then reject his fly, that dry fly fishing for trout, just like spin bowling, is all about deception. Where the dry-fly angler seeks to dupe the fish into eating his carefully presented fly, the spin bowler hopes to seduce the batter into making a mistake, again with a temptingly presented delivery. Both are a peculiar mixture of science, artistry and devilry, and have a tendency to be zero-sum games – six or out, caught or not. 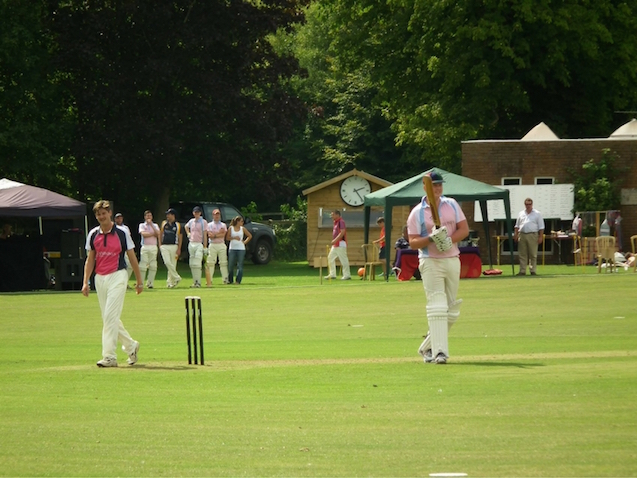 Many cricket fans will tell you that watching a great spin bowler go head-to-head with a great batter is the most exciting kind of cricket to watch, when the margins for error on both sides are tiny and a mistake can spell disaster. Watching the angler casting to fish that would move toward the fly only to turn away at the last second provoked the same gasps of astonishment from me as a ball that spins just past the edge of the bat, inexplicably, impossibly, missing willow, pad and stumps; and if the fish had taken I might actually have appealed to the non-existent umpire.

Batting, on the other hand, is as much about concentration, perseverance and bloody-mindedness as anything else, and for those who’ve struggled when the fish aren’t biting only to be rewarded with the ‘last cast of the day’, the notion that patience is often rewarded will be familiar.

Batsmen often talk about being in the ‘zone’, and while my batting leaves a great deal to be desired I understand what they are talking about thanks to the hours I’ve spent salmon fishing. 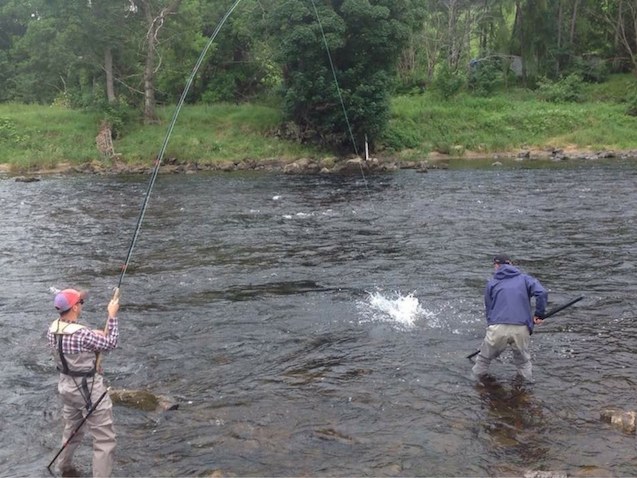 Fishing and cricket can both be broken down into a series of discrete events – each cast, each delivery. The batsman must refocus before each ball, forgetting the one before, regardless of whether it was smashed to the boundary or nearly cartwheeled his middle stump. Similarly, as a novice salmon fisher for whom casting has not yet become second nature, I have to focus completely on each cast. If I allow a previous good one to give me confidence, there’s a good chance I’ll fluff the next. Casting, they say, is all about timing. And if there’s one thing that sets a great batsman apart from a merely competent one, it is that same quality: timing.

Wicket-keepers are the ghillies of the cricketing world – they see everything, are often astute readers of the game, and frequently keep up a stream of amusing chatter. Just as the bowler relies upon his keeper to pouch the edges, a good ghillie is often the difference between landing and losing a fish. Their work often goes unsung, but rarely unappreciated. They are often the true characters of the game.

I could go on: cricket and fishing are one-on-one contests: man vs fish; batter vs bowler; we love a good statistic: batting and bowling averages, the weights of our first, and biggest fish; we’re obsessed with the weather. We like a good net.

However, one thing you may have noticed is that I’ve not tried to draw parallels between fast bowling and fishing. As former England spin bowler Robert Croft put it “You need to be patient […] I can’t imagine fast bowlers doing it.” A stereotypical fast bowler’s fishing technique would probably be dynamite. That said, both my brothers are quick bowlers and are decent fishermen, while my dad, and come to that, Sir Beefy and Dale Steyn, are more than decent at both. 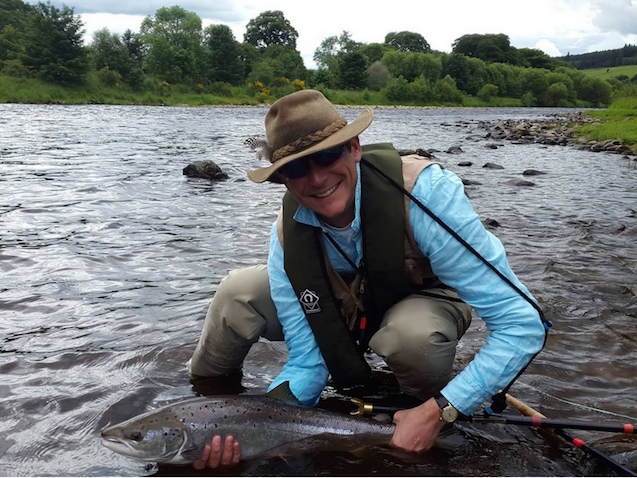 For me personally, cricket and fishing provide spaces in which I can devote my entire being to the activity at hand, something that I find incredibly restful. Both are enormously frustrating, occasionally painful, and tremendously rewarding, often in the space of a few moments, and that, perhaps, is what makes them both so special.

So perhaps, as Joe Root’s men limp to another feeble Ashes defeat at the hands of Steve Smith’s Australian side, we can take comfort in the fact that success and failure in cricket, like in fishing, rarely lasts for long, and that England might have found a leg spinner.

George would like to thank : Georgia Munro Ford for the fishing pics. James Browne for the author with the salmon and cricket pics from Hampshire Hogs CC