It was with a huge amount of excitement I booked a last minute trip to Vancouver Island with BC Fishing Ltd. It was also not without a touch of concern, being a UK fisherman through and through, I like to swing a fly for atlantics or sea trout and I knew that Canada would be a different ball game. I worried I would not enjoy the method of fishing, or worse, I would be spoilt by the sheer numbers of fish or the number of fishermen and women jostling for position would not suit my fishing mind-set. It turns out I had no need to worry about any of the above.

I flew from Edinburgh with two connections to Campbell River although I could have kept it to one but last minute booking reduced my options. As someone who views any form of international travel with a suspicion that delay and queues are around the next corner, it comes as a huge surprise to me that the journey actually went easily. Having said that you would have seen me dashing like a lunatic through both airports worrying I would miss the connections. As it turns out rods, bag and I appeared off the plane in Campbell River in one piece. No sweat, I will now add international jet setting fisherman to my CV. 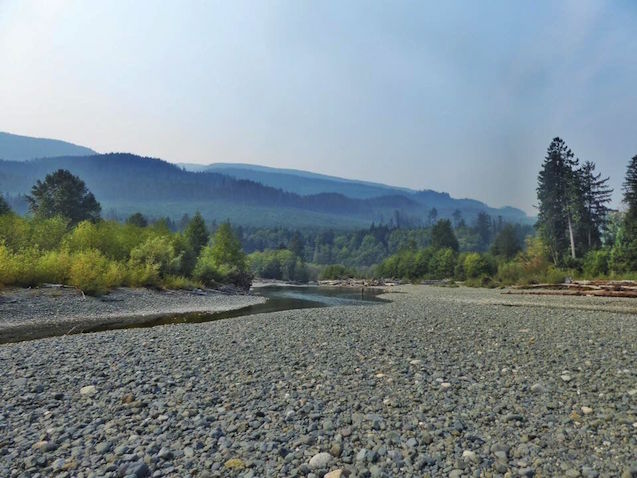 The flight was spent reading the guide book written by Ian Davis who, over the last 20 years has been salmon fishing very successfully on the northern rivers of Vancouver Island. Since 2003 Ian has run BC fishing Ltd, taking nearly 350 guests, mainly from the UK, to Vancouver Island, where they have experienced some of the best salmon fishing in the world. Initially Ian and his partner guided their guests, however, after the global financial crisis in 2008 it quickly became apparent that the trips were then too expensive and had to be radically changed. Costs for personal guides made the trips out of reach for anglers from the UK, so Ian put all his knowledge and experience into the aforementioned guide book, which is re-issued each year with the year's tide tables included (as I found out, they really should be checked before setting out for the day!)  The guide book has proven to be a winner and enabled the costs of the trips to be cut back to a level that most of us looking for a fishing trip of a lifetime can afford. The guide book gives you all the information you need to travel around the North Island finding those spots Ian has found and researched over the years. With 10 years of editing it is a refined bit of writing worth its weight in gold. BC Fishing Ltd had sorted my flights, licences, accommodation and transport. It was now up to me to plan my week of fishing and what I wanted to do.

My main aim was to tick a few boxes on the species front.

On arrival, Ian was at the airport to welcome us and make sure all our rods and bags had arrived safely. We then transferred to the hotel/motel where I unpacked and put my rod up for a quick trip to the Campbell River before supper. With nothing doing on the river we walked up the Quinsum River (tributary and main spawning ground of the Campbell). I picked up a nice coho which I unhooked and popped back before any photo could be taken, something I would regret as they are not as obliging as a second cast hook up might imply! 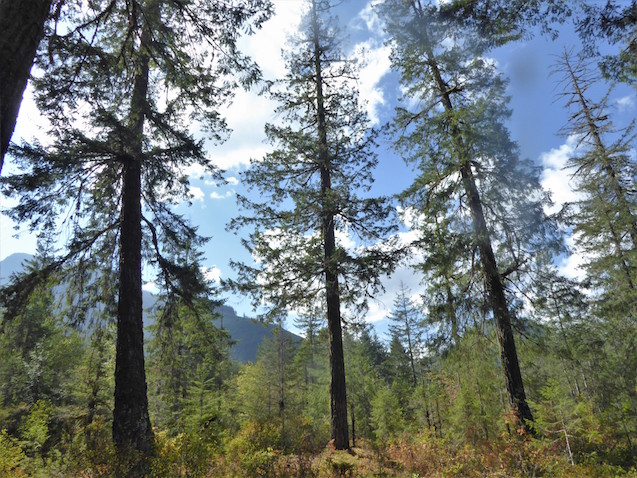 It is worth mentioning the motel at this point; it has been used by BC fishing since they started 16-odd years ago, it has excellent drying facilities, BBQs, fish cleaning stations and kitchens in all the rooms enabling guests to fish this stunning island on a budget. BC fishing can offer other accommodation in hotels throughout the island to suit every budget and requirement.

The next few days were spent exploring the rivers selected in BC fishing's guide book, this is how BC Fishing Ltd keeps its guests on the straight and narrow. The method of fishing is different to say the least. Given the volume of fish, Czech nymphing, or Polish nymphing as they call it in Canada, enables you to get the fly down to the fish without foul hooking every cast. This can take some getting used to but it is important this is the method fished. Our familiar down and across techniques result in fish getting foul hooked, something to be avoided otherwise permits can be taken away by the authorities.

Vancouver Island is huge (same size as England) with many rivers and salmon. My main aim was to catch as many species as possible so with the coho and pinks under my belt we headed west to a tidal pool which needs to be seen to be believed. The Chinook or king salmon were there in numbers swimming around the pools, after a frustrating start and with the tide marching in fast I was losing time to catch one of these monsters. Finally I hooked into one of around 20lbs which led me a merry dance around the rock pool. These are spectacular fish and even though clearly visible from the bank in large numbers they can be frustrating!

This might also be a good point to mention the Canadian wildlife which to its last whisker adds a bit of adrenalin to the adventure. I must add that since a very young boy I have had an inexplicable fear of bears, particularly polar bears. Luckily the colour of the Vancouver bears are black but none the less my first couple of encounters with them nearly bought the brown trouser gag to reality. One particular experience I shall never forget happened just after I had fallen in the river and had taken my waders off to dry. I was busy passing the time with two German fishermen when a bear appeared on the far bank. Even with our polite requests for it to go else were, it decided to start crossing the river. I have never put a pair of wet waders on so quickly! The drill is, if you run the bear will give chase, so a game of reverse 'what's the time Mr Bear' started to take place. Needless to say the bear was not into us but casually started to fish and move off down river. I walked back to the main pool with my new German friends that day having found it blocking my path on my first solo effort. The mountain lions, or cougars are the real danger and you need to keep on your toes and stay well out of their way. They are not as common as the bears thank goodness and normally stay out of the way of humans but none the less caution is needed. Not all the wildlife is deadly though and we saw otters, eagles, kingfishers, turkey vultures, blue jays and white tail deer. 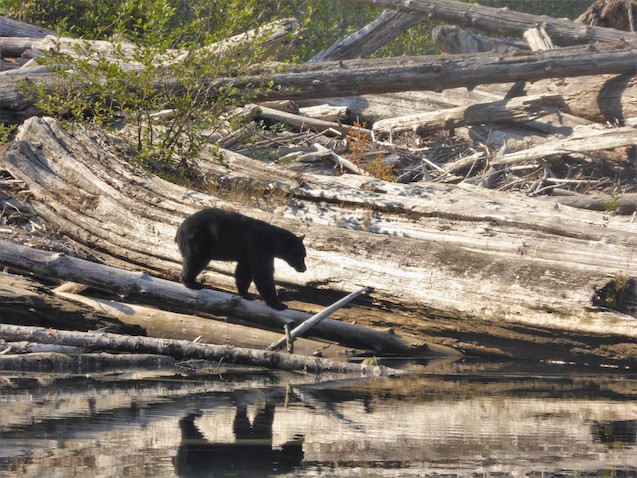 Next on the hit list was a sockeye which goes down for me as one of my most memorable fish of all time. We walked to the pool through the forest and down to the junction pool where two rivers meet. Although we could see some fish they were deep in one of the prettiest pools I have ever fished. Very kindly the two other rods we were with let me go first. It was a tricky cast which involved sliding the fly down the rock on the far side to make sure the depth was reached before the fly gently trotted past the fish. I hooked into a fish on about my 15th cast and the tranquillity of that stunning spot was shattered by my reel, line and fish going mental, luckily all in the same direction, I might have even given a loud whoop as it came gunning in the air towards me. Once landed, I gave way to the others who also caught fish. At the end I had a couple of casts and again I hooked into a fish producing the same rush of speed and agility. Honestly one of my favourite fishing moments. 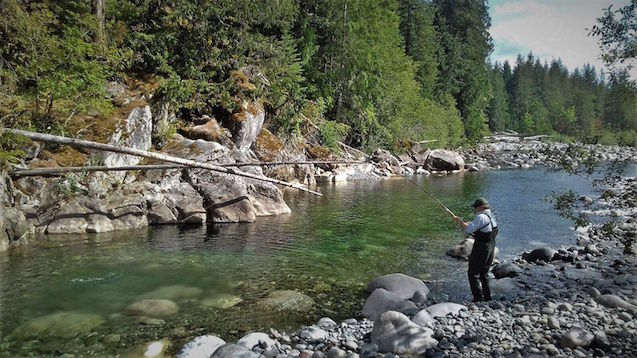 My last day was to be spent back on the Campbell River desperately seeking the 5th fish on my list, a cutthroat trout. This was harder than I thought and although I hooked into a large salmon and some pinks, the cutthroat was elusive. I walked back down the main river meeting Phil Ellis of Yorkshire fishing fame. They were just starting their adventure and after some good chat and mutual friends discussed and not with a little jealousy I parted and headed downstream finally catching my cutthroat in the last pool I fished, making my five species. 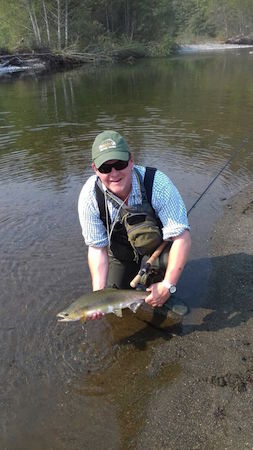 Vancouver Island is an amazing place with views that need to be seen to be believed and salmon in vast numbers. At times you can't help but look at the wildness and wonder about the pioneers who built settlements, rail roads and roads out there. I also found their conservation methods fascinating and I came away from Vancouver Island wondering if the conservation efforts that have been so successfully deployed on the Island could be used in Scotland to help our Atlantic salmon. We had a very interesting trip to the Quinsam River hatchery which is an amazing place and shows what can be done to regain fish numbers in the rivers with relatively little human interaction. Their situation was worse than ours is now and they have regained their runs from almost nothing.

I loved my trip so much I have joined BC Fishing Ltd and I am looking forward to 2018 were I hope to target the coho, sockeye and fingers crossed, the elusive trophy fish………….a steelhead!