What’s disappointing about my job is that I don’t get much opportunity to go fishing with my colleagues, particularly my boss, Olly. Olly loves his fishing but with a full-time job, a working wife and a young family he doesn’t get much opportunity to get out. Fishing together is almost impossible because he’s usually off when I’m on and vice versa. 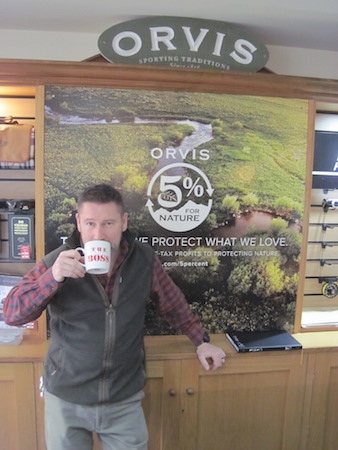 This year we managed to get out three times.

One of the theoretical perks of working for Orvis is that we have two beats, The Ginger Beer Beat on the Test at Kimbridge and the Abbots Worthy Beat on the Itchen. During the summer we also have access to the Test at Timsbury 5. 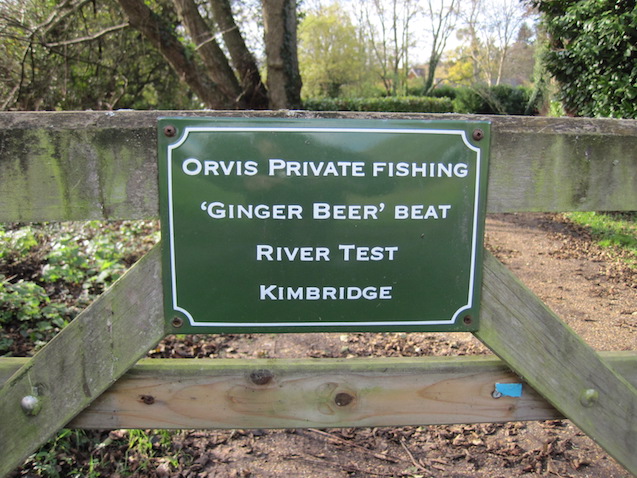 The problem is that during the peak periods these beats are pretty much fully booked. Good for our profits but not great for a bit of staff fishing. One Friday we got a tip-off from our keeper that the rods had gone home early and that there was no one on the water. I looked at Olly and he looked at me. He made a quick phone call home and the good news was he didn’t have to be home till after sunset. Olly headed down to the beat before me, I had to cash up and lock up.

It was after six by the time I’d driven down to the river. The sun was starting to dip, lighting up the flowers on the Hawthorn 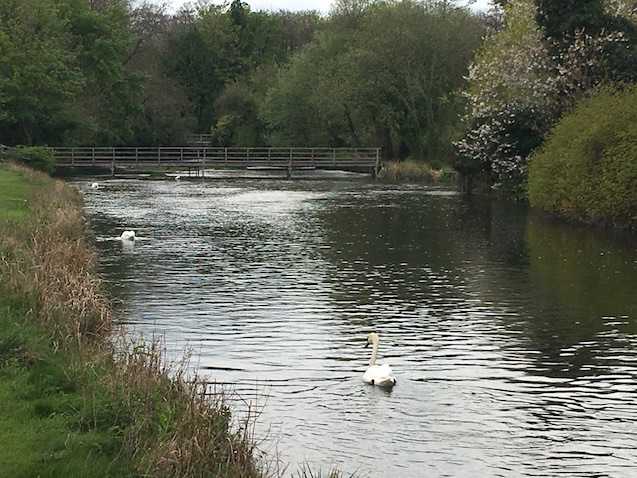 Swans on the Test at Kimbridge

As I crossed the foot bridge I could see Olly’s rod was bent over, he was obviously having some luck. As I approached he saw me and told me to come and give him a hand landing a good perch; not what I was expecting. 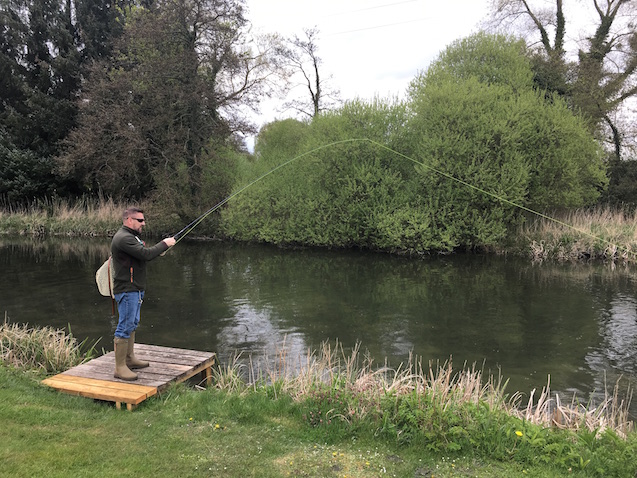 Olly into a good fish

As he started to get the fish near the net he changed his mind, it was now a good carp. Laying the fish on the bank we could see that it was actually a good roach. It lay in the net bright silver and pewter, the sun catching its orange fins. It was big and it was beautiful. We haven’t let Olly forget about his poor fish identification skills however. 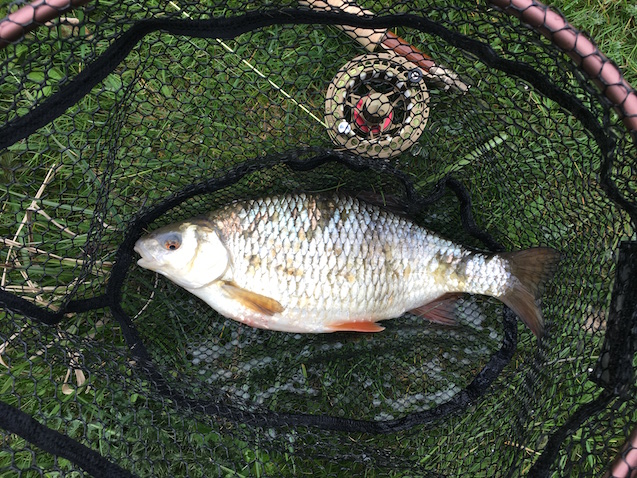 One of the benefits of working in a shop that sells fishing tackle is that you get to meet lots of anglers and people involved in the fishing game. Occasionally these people ask if you fancy going fishing on their bit of water. Early May Olly had an invite to go up and fish the Lambourn, unfortunately I was working. Mid-afternoon I got a text from Olly telling me to come and join them on my way home. I didn’t need asking twice. 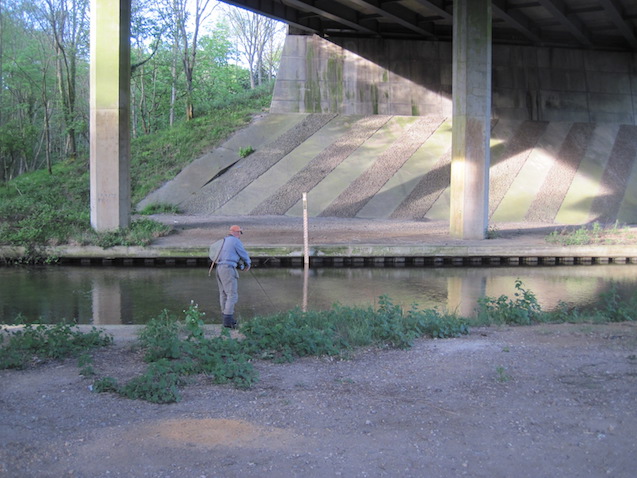 Olly under the M4

As it turned out Olly hadn’t long arrived when I pulled up in the fishery car park under the M4. We put our rods up and then set off upstream. The river was low and clear, you could see every fish, and they could see us. Not a good recipe for success but the good news was that a few fish were rising, and this seemed to distract them enough to overlook us. Olly looked a bit miffed when I caught a wild trout just below him on a Mayfly. There is nothing worse than inviting someone along and them catching before you do. But Olly soon opened his own account. 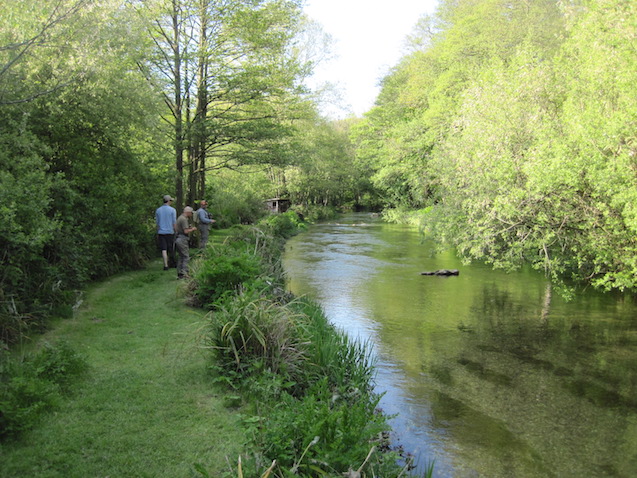 Our visit was much more than just a fishing outing. It was a great opportunity to see the fruit of Stuart’s hard work. A huge amount of effort has gone into restoring this length of the Lambourn and it has made a huge difference. Despite the lack of water, due to the dry winter, the river was holding up wonderfully and the trout were clearly benefiting; they were everywhere. We were also treated to a wonderful BBQ supper on the banks of the river courtesy of Stuart’s wife. Mind you it’s always tricky taking time away from the river to eat when there are fish rising.

Our final day on the river would be a proper day out. Both Olly and I were off at the same time and he didn’t have any family duties to perform. We asked if anyone had booked fishing on the Orvis beat on the Itchen and were pleased to hear it was free. The gods were being kind to us for a change. 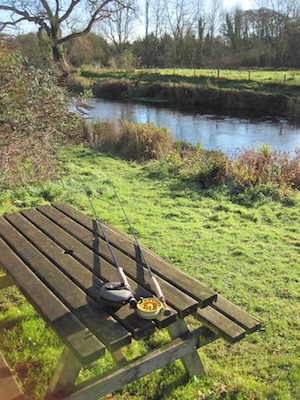 Set up and ready to go

I arrived first and got ready whilst I waited for Olly to arrive. A text warned me that he was running late so I wandered down to the river for a quick recce. The Itchen, like the Lambourn, was slipping by low and clear. It was a lovely late November day. Blue skies with light wispy cloud and a mellow sun, but it was chilly. Despite this a few small grayling were rising in the thin water above the weed guard. I’d set up one of our Recon 10’ 3 weight rods expecting to be fishing nymphs, now I had to re-rig for dry fly. Two little beauties had succumbed to my Olive Emerger’s charms when Olly came strolling down the path. The shallows were very shallow and the deeper pools very slow so we headed upstream to find some water with a bit of depth and pace. We found it at the top of the beat below the hatches. 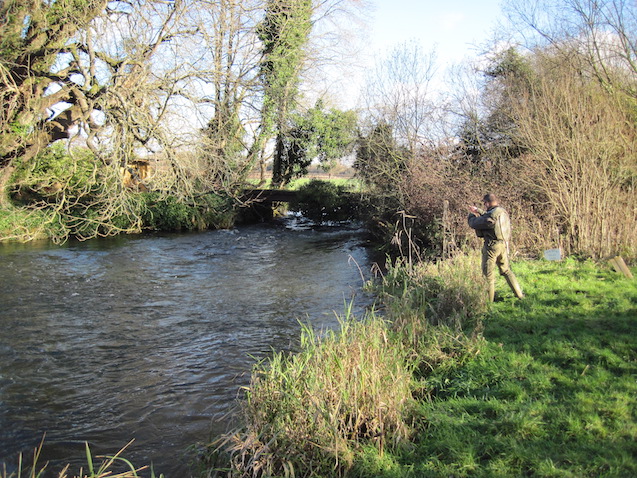 Olly at the top of the beat

Olly found things slow going fishing from the bank until he added an indicator to his nymph set up. Grayling takes can be so difficult to spot, some form of indicator often helps. As soon as he put the indicator on Olly started to get amongst the grayling, and some nice ones to boot. I decided to wade out and fish a duo of nymphs on a french leader at close quarters. I expected to pick up some grayling on the heavier point fly, a Duracell Jig. The jazzy UV Shrimp on the dropper was there for colour and interest. Unusually it was the trout that were hard on the bottom, so I lightened up my rig and immediately started to catch grayling on the Shrimp.

I’d brought a pike rod with me so on the way back downstream we tried a few casts along the margins and into any snaggy bays. We know there are a few good pike on the beat but they didn’t put in an appearance. A big trout did come charging out of the reed beds to see off my black Pike Bunny, which got the adrenalin pumping. 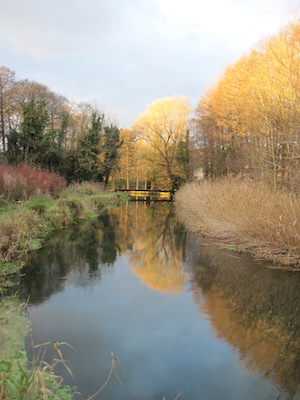 As we neared the end of the beat and our day out together the winter sun lit up the willows. A spectacular conclusion to the day and our year fishing together. Fingers crossed we can find more opportunities this year.