Ever lost or misplaced your tackle? Here's a story to make sure you check everything before leaving the water from Ray Kuramoto

I’ve done some stupid things while fishing before, but last week took the cake.  I forgot my rod in the parking lot, laying on the asphalt beside the passenger side door.  As soon as I arrived home, I realized what I had done and raced back, only it was nowhere to be found.  As I retraced my steps, I couldn’t help but think that whoever stole my gear was probably looking at me from a safe distance and having a good laugh at my expense.

I live in Denmark, where people are generally pretty honest, so while I was driving back to find my rod I was thinking that my worst case scenario would be that I would find it run over with an apologetic note attached.  This would have been bad news for the reel, but at least I could have had the rod replaced.  I am pretty sure that the lifetime guarantee would have covered this sort of situation.  But deep down, I was quietly optimistic that I would find it unharmed and conspicuously located, awaiting my return. 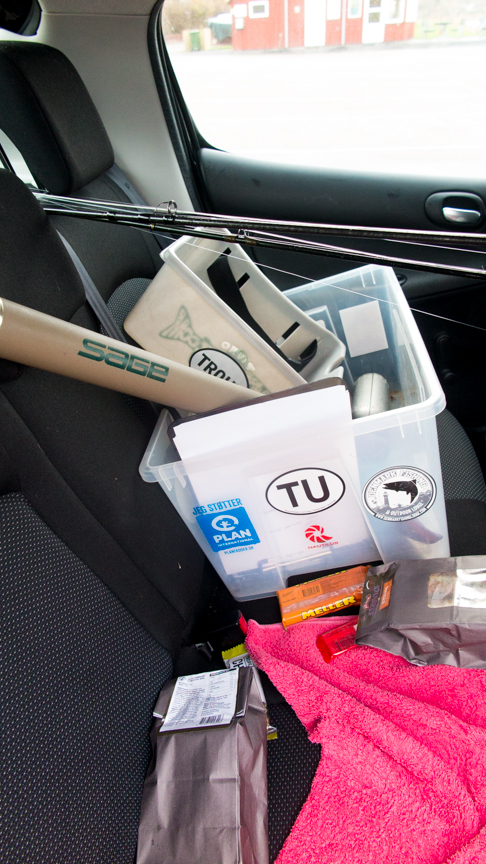 But no.  Some dirtbag, probably not believing his or her luck, drove off with my Sage XP, Nautilus X reel, and Zpey shooting head and running line. It was my perfect setup for coastal sea trout fishing.  I loved that rod, used it for many years, and was sure that I would never have to buy another, which was a good thing since Sage stopped making them years ago. I was clearly wrong about that.

I have had similar, smaller episodes before. Like the time my eye glimpsed something in the rear view mirror, which turned out to be my reel bouncing off the pavement at speed, having been left on the roof of the car. Or the time I burned my fly line in two during an epic mayfly hatch, having brought it too close to my cigar. Or the time I dropped my mobile phone in the river before the days they were waterproof. And so on.

No, this brain fart was in a class by itself. At first I wished death on the thief. I hoped that they didn’t understand the conducting abilities of graphite, and got electrocuted in a lightning storm for their dishonesty. Or maybe an angler friend of theirs turned them into the police. Or that they got a severe case of the guilts and end up with anxiety attacks for the rest of their lives, knowing that I would stop at nothing to get my gear back.

But then I thought about things from a different angle. What if the thief took up fly fishing and enjoyed it for the rest of his or her life, rescued by my gear from a life of crime? Or what if they enjoyed it so much, that they wrote an article about their good fortune to Eat, Sleep, Fish? The dirtbag thief actually becomes a gifted angling author and ends up sharing this story and many more to inspire generations of anglers. All this because of my forgetfulness on a cold winter’s day.

I don’t really know how the story will end, other than it will end up costing me a princely sum to get myself back on the water. So the next time I am done fishing for the day, I think that I will clip off my fly, break the rod down, and put it in the car as the first order of business. I can’t afford another senior moment like this one anytime soon.