Kris Kent explains why he likes a river map

I love a river map. You know the sort of thing, a representation of the river showing where to park, access, all the pools, perhaps buildings of note. Sometimes they are very simple workmanlike pieces, designed to help the visiting angler. Sometimes they can be real works of art designed to don the angler’s wall. The latter are often beautifully illustrated with river scenes, fauna and flora. I have a few adorning my man cave. 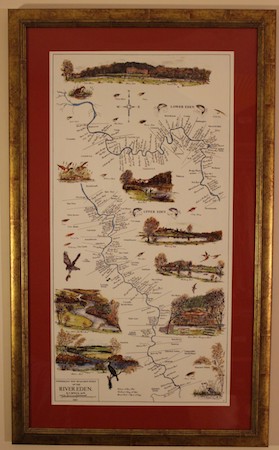 Map of the River Eden in Cumbria 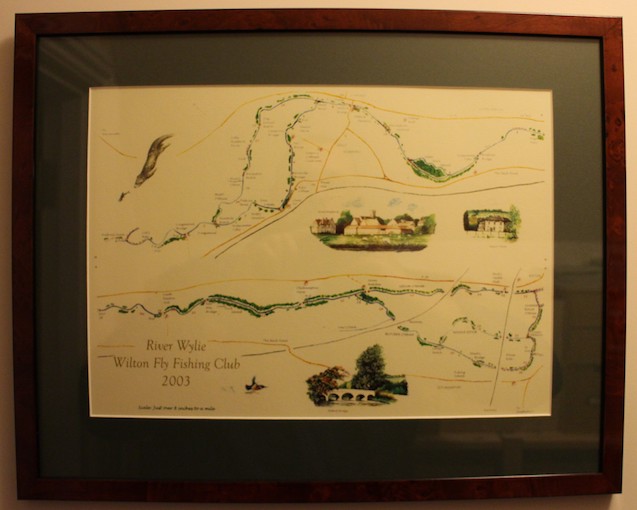 The Wilton Club's waters on the Wylie!

My favourite river map hangs in the entrance hall to The Falcon Inn at Arncliffe in North Yorkshire. It is a wonderful piece of art in its own right with lovely illustrations and useful annotations. When visiting to fish the Skirfare I can stand for hours studying it and reminiscing about fish caught from each pool or run.

River map of the Skirfare at Arncliffe

Some river maps are very accurate with precise scales and accurate reproductions of every bend and pool. Some are more impressionistic. Tony Oliver illustrated a fantastic map of the Dairy House waters on the Dorset Frome for John Aplin. You get a feel for the layout of the river but it is more a portrayal of the culture at John’s wonderful fishery. Informality, relaxation and lots of fun. 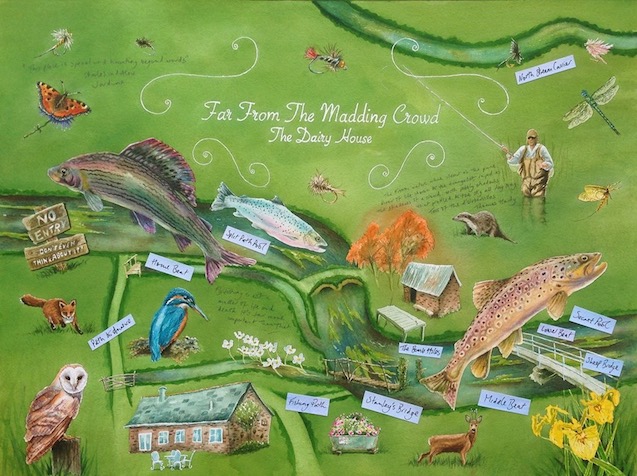 The Dairy House waters on the Frome

Whenever I get an invite to fish a new water I try to get hold of a river map so that I can get a feel for the water. Of course, there are lots of things you can’t tell from a map, the depth, the flow, the cover, weed growth etc. But you can get an impression, is it straight or meandering, flowing through open pastures or woodland, are there hatch pools and weirs. It’s a good starting point when planning a visit. I also like to look at the names of the pools and to wonder at their origins. Some are fairly obvious such as the ‘Junction Pool’ or the ‘Mill Pool’. Many rivers have a ‘Bathing Pool’ or ‘Swimming Pool’ somewhere along their length. When you visit them you often still find a length of rope hanging from an adjacent tree facilitating childrens' entry into the pool, from some height. 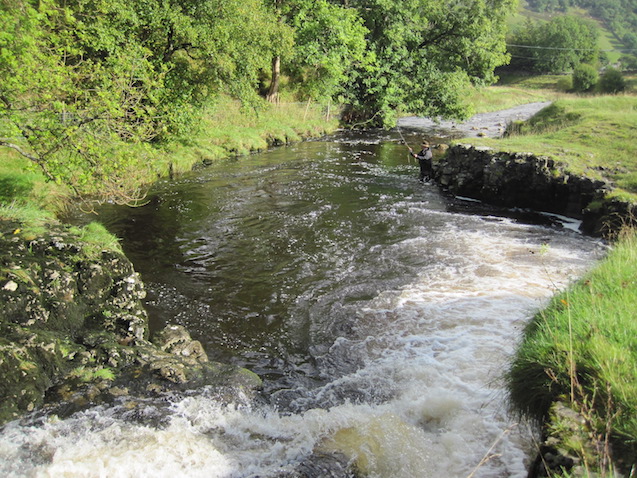 The 'Swimming Pool' on Cowside Beck

On the Skirfare there is a lovely curving run called ‘Sandmartins’ because it cuts into a steep soft bank perfect for nesting sandmartins. Some may relate to people of note. On the Wye at Abernant there is a run mid-beat called ‘Lady Alexander's Catch’. Despite much research I have yet to find out who she was but I assume that she is associated with Abernant House, a large house just opposite. Occasionally pools or runs are named for notable events. Recently a fishery renamed a pool in honour of the Queen's Jubilee. On the Skirfare one pool is referred to as ‘Doctor's’ and marks the spot a local physician allegedly hung himself. Some names are informal, not necessarily captured on any map. Above Arncliffe Bridge is a shallow run referred to by local anglers as ‘Heartbreak’. The fish in this run often rise enthusiastically in a good hatch of upwings but are very easy to spook in the thin, gin clear waters.  Breaking many an angler's heart, and their resolve. 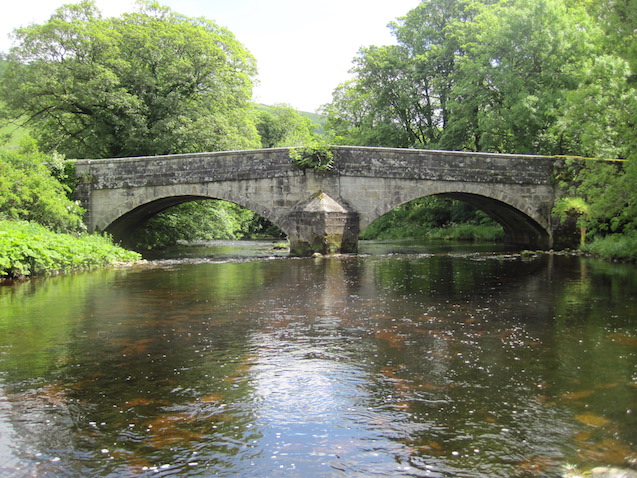 My interest was piqued recently when a new river map appeared in my email inbox. Vince had invited me to come fishing with him on one of his club waters. On the previous day a guest ticket had arrived via email, all very formal, and then an email arrived with the map plus some instructions on the various parking places. The river map was very well laid out. The river ran down the middle of the page broken down into 14 reaches. The major features were all labelled, streams, carriers, trees, pools and shallows, huts, farms and major houses. All the roads were clearly laid out and labelled with parking places marked. They also include pubs, post offices and churches, just in case you needed a pint, postage stamps or penitence. I started studying the pools and runs for clues.  I was immediately gripped by a section called ‘Darkest Africa'. Not a normal name for rural Wiltshire. I then noticed references to ‘Tank Crossings’. Only then did I notice the name of the club, the Services Dry Fly Fishing Association.  The club is for ex-services personnel or Ministry of Defence civil servants. They have around six miles of the Wiltshire Avon centred around Netheravon on the edge of Salisbury Plain. I suddenly didn’t feel worthy as this was the fishery keepered by the legendary Frank Sawyer, creator of the Pheasant Tail Nymph, Grey Goose Nymph and the Killer Bug, who also wrote Keeper of the Stream and Nymphs and the Trout. 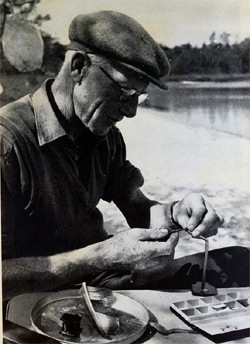 Vince met me in the cark park just outside Figheldean. It was a cold morning and we hurried into layers of fleeces and our waders. The dry autumn meant the Wiltshire Avon was low but rain the previous day had put a little colour in the water. We stood on the road bridge and were disappointed to not see any fish on the gravels. Hopefully not an omen for the day. Upstream, Vince put me into a deep run whilst he headed further up to check out some other runs. I had put up a 10’ 2 weight rod with a French leader rig. The deep water meant I needed a bit of weight on the point so I looked through my nymph boxes for something with a bit of tungsten. I settled on a gold head jig pattern with a red tag and a CDC collar. For the dropper I went for something glitzy, a pinkie/orangey Disco Shrimp that Matt Eastham had given me. Lobbing the flies ahead of me I searched the water thoroughly.  It was only towards the front of the pool and over on the far side that I started to pick up a few grayling. 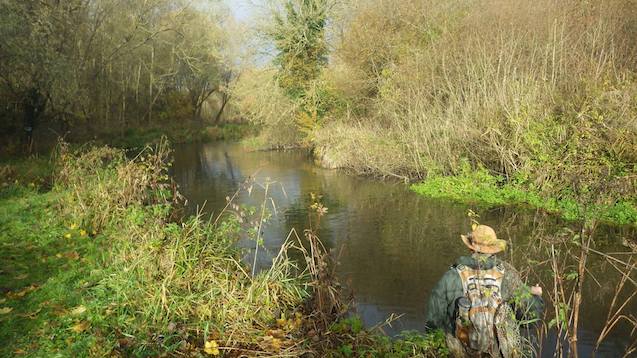 The first pool on the Avon

As I fished the pool out Vince caught up with me so I climbed out and let him have a go. He was fishing what he called a Wiltshire leader. A fairly standard leader with a length of red monofilament as indicator and a single nymph. In the same spot as I’d caught my first fish Vince also got in amongst the ladies. 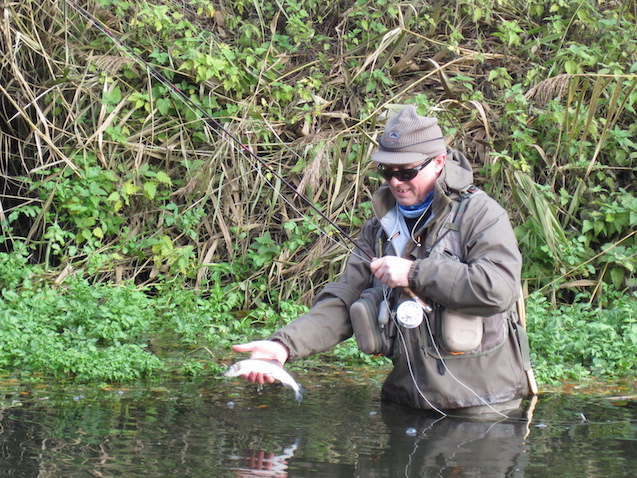 Vince into an Avon Grayling

Having got a couple in his proverbial creel, Vince went off to search out some more hot spots. I followed on behind slowly. Just ahead of a tree that hung out low over the river I spotted a rise so I paused and watched to see if it would be repeated. It did. I cast into the fast water ahead of the tree and on the third try the spiral indicator twitched and a small grayling was on. If the flies didn’t tempt a fish in the fast run I let them swing down under the tree through a deeper scour. Snagging the weed I pulled hard to free the fly only to find a fish on the end. Whether it was always there or that it took the dropper when the point fly snagged I don’t know but there it was, and a better fish. 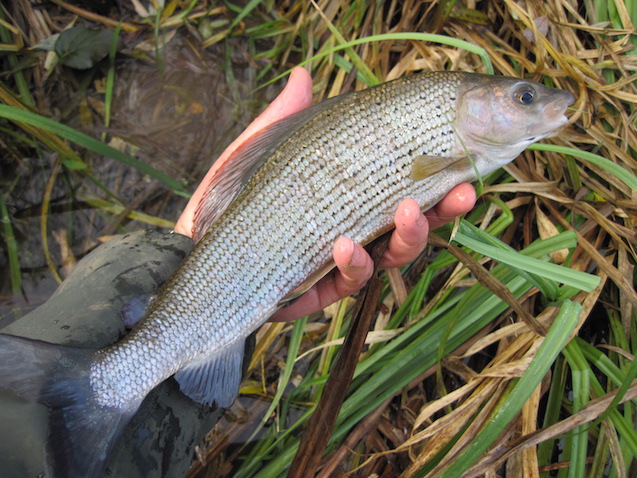 We walked a fair way upstream and didn’t see any fish in the thin water. When we came to a deeper corner pool we stopped and had our lunch. As we sipped on our bottles of beer and tucked into our pork pies we noticed a few fish moving in the faster tongue of water coming off the shallows at the head of the pool. One of the handy things about fishing with Vince is that he is a south paw, a left hander. This means we can fish both banks effectively without tripping over one and other. The corner pool produced a good few fish including a couple to the dry fly. 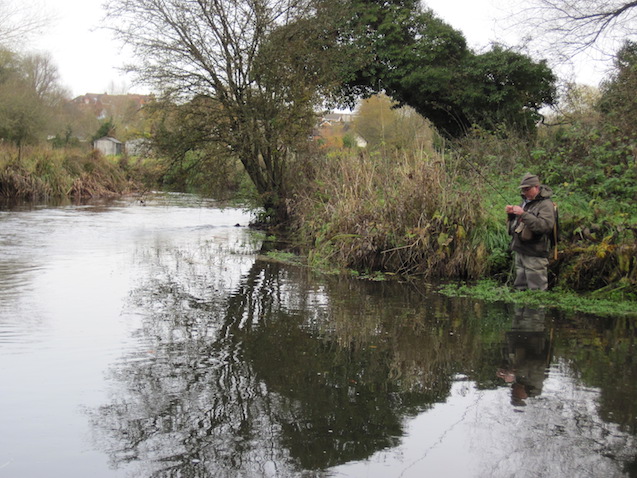 Vince on the corner pool

Another long walk found only one fish on the thin water. We finished off with a handful of fish from the hatch pool before the long walk back to the cars. On reflection, I think I had the best of the day with the duo of flies and French leader out-fishing the single fly on Vince’s Wiltshire leader. Was it that mine were getting down to where the fish were or was it that the dropper was hovering just above the weed whilst the single fly was hidden in it. I’m not sure but it was definitely the right choice on the day. I wonder what Frank Sawyer would make of these new-fangled techniques. As an innovator, I’m sure he would approve.

Kris Kent has been fly fishing and trotting for brown trout and grayling for over 20 years in the UK, Europe and Scandinavia. He is PR Officer for the Grayling Society and helps out The Wild Trout Trust with their online communications and events. He is also chief guide at Chalkstream Dreams