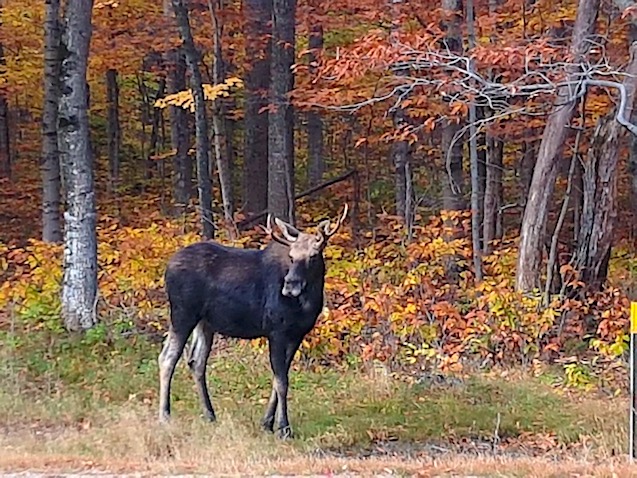 I thought I would start with this photo of a random moose that ambled nonchalantly across the road on the way to the water. It's not really anything to do with fishing, but I have never met anyone who does not like a moose. If you disagree I am sure there are moose trauma therapists out there somewhere.

This article is really about the importance of the passage of time, fulfilling your dreams and most of all optimism. Despite everything, nature will thrive given half a chance. It's also about ticking three items off my bucket list. And three in a single fishing trip is pretty good by any standards. Let me explain.

By way of background I am a Brit getting close to that odd age when you automatically make a noise getting in and out of a comfy chair. You also acquire mystical powers that can make any set of reading glasses vanish instantly and are completely unabashed at feigning deafness either because you simply can't be bothered to listen or because you drifted off thinking of something else. It’s a scientific fact that these traits and a lot worse come to us all at some point. It's nothing to be ashamed of, it's just life and life can pass you by unnoticed if you are not careful and do nothing about it.

When time allows, I can occasionally be found picking off wild trout in deepest mid-Devon (not so far from the home of ESF) or indulging in my recent love, catching mackerel and sometimes Atlantic sea bass on light tackle off the southwest coast. The problem though, is time. Competing demands on my time has not actually allowed a vast amount of fishing over recent years, as my good friend and ESF contributor Peter Anderson never ever fails to remind me. Pete, you are right, I know and I am doing my best mate!

Tick number one - fulfil a childhood dream and fly fish in the USA, but do it properly with a guide who really knows his stuff. In this case we are talking about a real hardworking gentlemen, Tom Freedman, who drove down from Maine and is part of Nate Hill's guiding company Hill Country Guides (the website is called White Mountain Fly Fishing) based in North Conway. Nate was great in getting me set up in a series of emails so all was ready for the big day. Also highly recommended is the North Country Angler on White Mountain Highway North Conway. This is a really decent fly fishing shop on the edge of town. Look up Steve Angers the owner and he can sort you with chest waders to borrow etc if your luggage allowance won't cover it. I have learnt over the years when you are time poor don't prat about prospecting on your own, find a great guide and guiding company to help. I know some anglers whose pride prevents them from doing this but in my experience it's always money well spent and you learn something new every time. 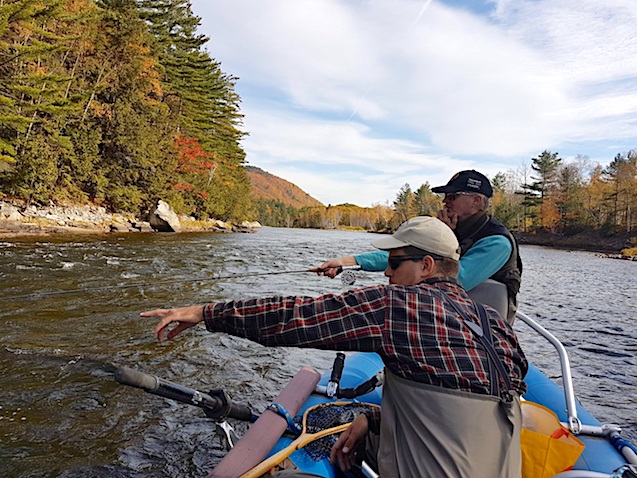 So why the childhood dream?  I used to read US fishing magazines as a small child that were supplied at far too infrequent intervals by a rarely seen in the UK, but very much loved itinerant Canadian Uncle (Mike that's you wherever on earth you are now). Mike did all sorts of wonderful jobs in his life and in his later years he sold up all his house and possessions and went kayaking and fishing in the Wilderness of the North West. Occasionally we would get a postcard as evidence that he was still alive with stories of paddling and bears. Then for a long time we heard nothing. I have to say we were slightly worried until he suddenly popped up panning for gold in California (and remarried).

The magazines he brought dated from the late sixties and early seventies. In amongst the adverts extolling the health benefits of menthol flavoured cigarettes in Montana they were full of pictures of fishy exotica, such as the Dolly Varden trout (what a name), cuthroats (ditto), brook trout, wild rainbows and the like, all to be found in various snow and rain-fed mountain streams or caught from rafts on magnificent wide boulder-strewn fast flowing rivers.

In recent years I have travelled to the USA a lot on business and occasional holidays, but have never been fishing there, until last fall. Shame on me, my fault entirely. I am guilty as charged. It was time to fix things.

Tick number two. See the famous New Hampshire trees in their colourful glory with your best gal by your side. So last autumn I put things right and made sure my business trip to Boston involved a long weekend with my wife and soul mate in the White Mountains with a float trip involved. She is a saint as she does not fish, but was prepared to sit in the back of our raft and take the pictures. 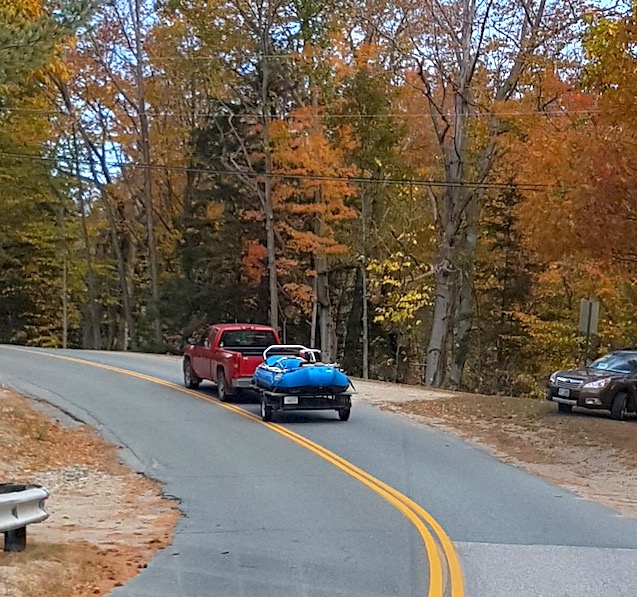 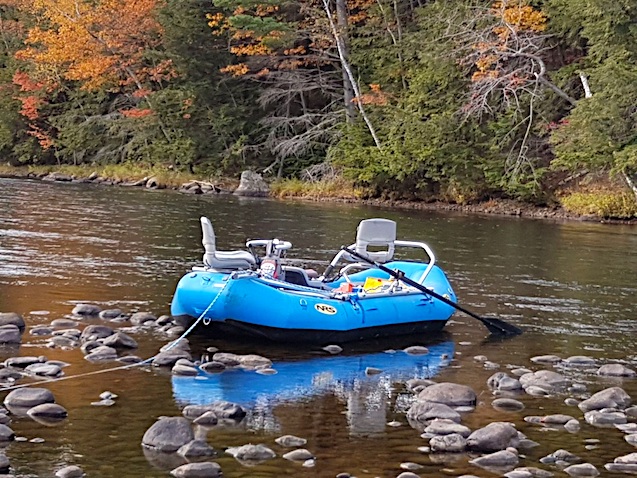 Tick number three. Win a quiz and in so doing put one over on your fishing brother-in-law, who loves nothing better than adding to his "species caught on the fly from some far-flung place list" and also on your UK friends and fishing business partners who like nothing better than a little wager with a decent bottle of wine at stake. I hasten to say, my brother-in-law is by far the better fisherman in the family, whose species list is tenfold mine and despite having the same occupation..ish, has managed to find a lot more time to get out there than me. I put it down to his Norwegian roots and better sense of priorities.

So before you read further let's all play a gameshow quiz of "Name that Fish". Mr Tyjas how  about that for an idea for a regular feature in ESF? Note that avid readers of ESF from New Hampshire and Maine are disqualified from this game, as having unfair local advantage over the rest of us and may wonder what the fuss is all about.

So name the fish below… 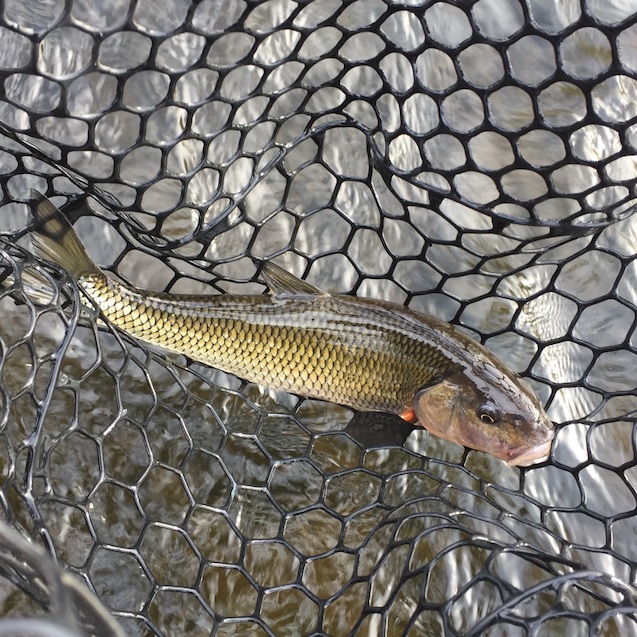 Any guesses? OK the answer was highly appropriate given the time of year. Tom referred  to this as a "chub", I guess due to its uncanny resemblance to the common European chub (Squalius Cephalus).  I have no idea whether it is related or not, but he also referred to it as a "fallfish" and also seemed a touch surprised to see it.

Completely out of the blue I had an identical pair of these on the fly, wading in very fast broken water, smooth, round boulders underfoot, casting to the far bank.  So, I appreciate it's not actually my childhood dream fish, but a surprise is a surprise.  I think a Dolly Varden trout would have probably got into the White Mountains News and caused a stampede of fishery scientists as technically Ms Varden is a species of char that inhabits the cold water tributaries of the Pacific  Ocean rivers on the West Coast.

Also I am not bothered about the precise latin name for the fallfish.  For me, it will always be a "What on earth is that… fish"!  It takes something to top the surprise of seeing a random moose on a fishing trip, but a random fish that you did not even know existed just edges it. Also I have seen moose before up close (coincidently with my wife high above the Arctic Circle on a wild skidoo trip driven by a crazy Swede with a nose bleed  - but that is another story entirely), so this little guy wins on this occasion. Also one should never underestimate the ability of a moose to surprise you in the future (they can pop up from nowhere without warning).

So why is this article also a tale of optimism? The reason is that the Androscoggin is a river that once ranked in the top 20 most polluted rivers in the USA. Think about that for a moment and think of the competition for that ranking. By any standard that is Olympic Gold Medal dirty. The fact that, from an all time low, it is now a thriving trout fishery should be a big plus for anyone with even a little bit of hope in their heart. I don't know about you, but personally I have to believe that even the worst excesses of the way we have treated wild aquatic environments can be repaired given enough time and sensible management .

Outside of the day job I am the Chair and a trustee of a charity in the UK that is trying to educate kids and visitors to our aquarium to connect them to the oceans, to preserve marine life and to help sustain and improve aquatic environments. When you get involved with those type of things you need positive stories to demonstrate all is not lost.

Sometimes it's legislation that helps, sometimes it’s the time and energy of inspirational people and there are a lot out there doing fantastic things, sometimes it's a healthy dollop of good luck and sometimes its social movements changing attitudes. The mix always differs. Be that as it may and whatever the reason in any given case, I need to believe once polluted rivers or seas choking with plastic pollution, sea grass beds damaged by beam trawlers etc can recover and the Androscoggin River did just that and from a starting point you would not wish on your worst enemy. 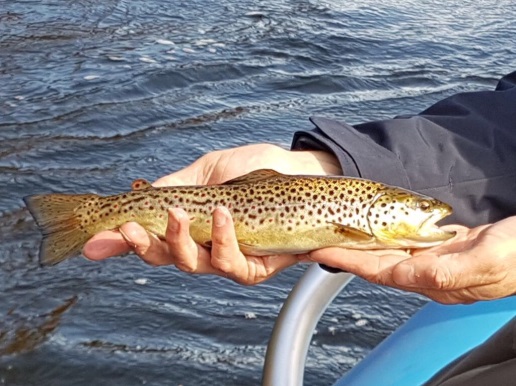 In this case the reprieve for the Androscoggin came from economic distress in industrial USA. A recession, in relatively recent times, wiped out the paper milling industry along its banks which had used heavy metals in large scale milling processes for decade after decade, after decade, much of which ended up and still remain in the main river system.

Every cloud has a quicksilver lining. Sorry about the metallurgical pun; there is a serious point here.  When the factories shut down, the river started to clean itself up, winter snow melt year after year, cleansing, scouring, renewing. Meanwhile its poor reputation kept many fishermen away for years.  Why fish an industrial war zone when you have so much other choice in the area, brimming with great fish, in fabulous surroundings? The residual heavy metals may still be there for a long time yet, but in turn it means the fishery can only be catch and release for the foreseeable future..

I very rarely take a fish for the pot nowadays and never a wild river one. Eating a fish from the main river could be seriously harmful to one's long-term health or as a friend of mine would put it, you would be making "an unwise Darwinian choice". So fish are not killed, fishing pressure is relatively light. Look what can happen. There are plenty more like this in there, plus lots of hard-fighting rainbows. Go get one and look up Nate if you need help.

Finally don't forget to go after your childhood dreams whenever you get the chance and always keep half an eye out for moose you never know when they are going to pop up next and surprise you.

PS  See if you can guess the day job from the following.  All rights reserved. The author has asserted his moral rights pursuant to Chapter IV of the Copyright Designs and Patents Act 1988.  That is why I do have not enough time to go fishing Mr Anderson.