The beginning of a new season is always an event which we look forward to with great anticipation. Truth be told, probably from the moment the previous season closes.

So it was this anticipation that I finally got the fishing season started, which began with my customary spring trip to the river Eden in Cumbria.

My preference is to get started in February or even March, but the weather this year had put a dampening effect on any such thoughts and plans.

Instead we got there during the second week of April, and we arrived on a beautiful spring day with temperatures  up to 14 degrees and a mild westerly wind. You couldn't ask for better conditions for the first trip of the year!

It was hard to believe that only three weeks earlier, the entire valley was covered in snow. Many of the hill tops still had snow on their sides as proof of this!

I wasn't due on the river until the next day so I used the time at hand for popping into a well-known tackle shop in Penrith, that serves as a "water hole" for the fishing folk, to get the latest news on the river.

Back at the cottage, I spent the evening going through line joints, leader knots, hook points and generally sorting out all the small things that can play a huge role if and when a salmon does take your fly.

The next day, as if on cue, the weather turned to a bitterly cold easterly wind and a drop in the air temperature to about half of what it had been a day earlier.

As a result, I was in no rush to get started and I took my time in getting to the beat, putting on my waders, and rigging up rod and line.

At least the sun peaked through quite often, albeit with little warming effect due to the wind. Most importantly however, I had the three main components of what constitutes a successful trip in my book - namely my hat, pipe and tobacco! 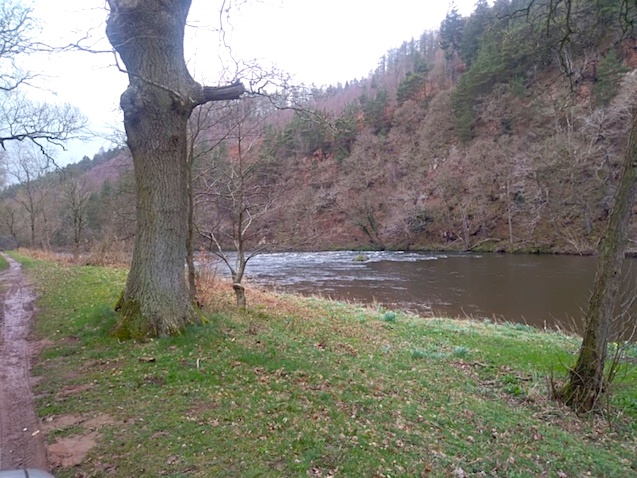 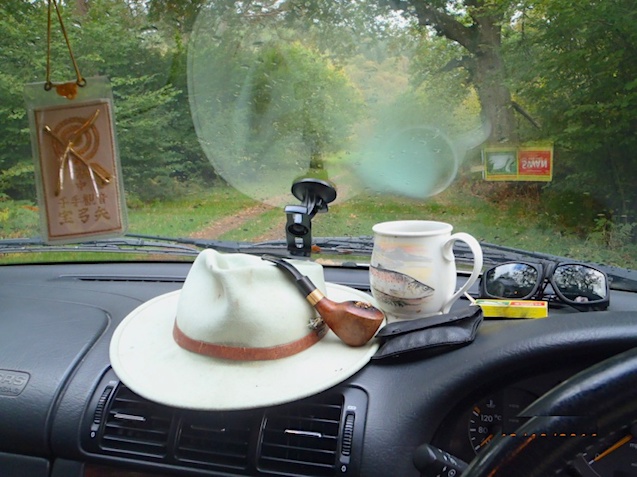 After a very long battle, I also have to admit that I finally succumbed to the advances of modern technology! Having held out for years and years in my luddite fortress with my obsolete but preferred and trusted battered 20 year old 16 ft Sage rod and Spey line setup, I could simply no longer ignore the advantages that newer shooting head outfits give you

With my Scandinavian influences, the logical progression seemed to me one of the Scandinavian makers of rod and line, and consequently I had chosen a Guideline 15ft, 10/11 weight outfit. I might add  that  I had also cheated a bit in order to give myself the best chances by putting in a bit of lawn practice over the winter to get used to a more  underhand style of casting than the conventional Spey cast. This, as it turned out, hadn’t been a complete waste of time and I was able to cover more water with greater efficiency!

I had also spent most of the winter tying up full-dressed classic salmon patterns for this season so I started with a Jock Scott on the leader for the first run through the pool. 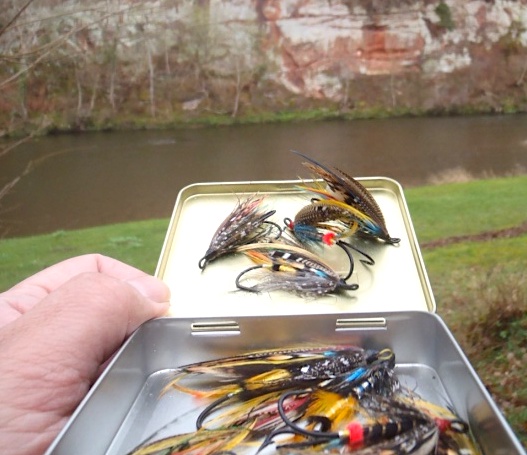 The first time fishing through the pool gave me the joy of swinging a classic salmon fly at the end of the leader, and the delight of being by the river again, but no reactions from the fish.

Before fishing through the pool again, I took the water temperature which to my surprise was 9 degrees! I would have expected it to be lower given all the snow melt that was coming off the day before. So I went down a couple of sizes in fly and changed the leader to fish higher in the water. I put on a Silver Doctor, which the Eden duly kept, almost as though the river demanded an offering of sorts.

I wouldn't have minded so much, if it wasn't because the fly was tied with genuine bustard feathers which are damned difficult to get a hold of - but then it wouldn't have been much of an offering if I hadn't felt that it was lamentable to lose it! 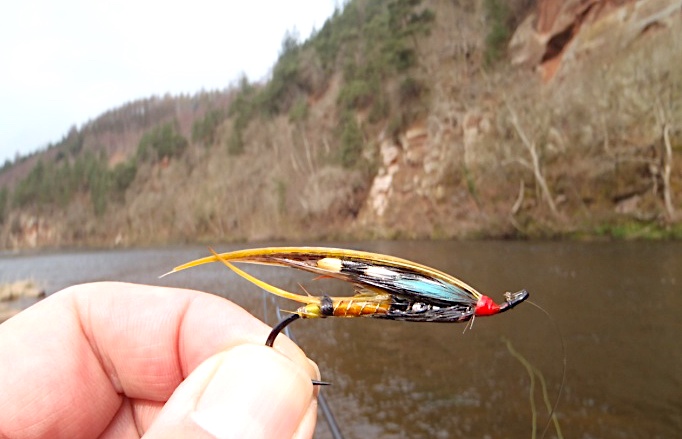 Around late afternoon I was feeling pretty spent and decided to call it a day.

The wading was a bit challenging due to high water and flow, and my being uncertain on the feet after the winter "hibernation".

It didn't look as though anything was going to happen. The entire gorge had taken on a heavy sort of feel with lead coloured sky and dropping barometer pressure!

So you can imagine my surprise when I turned up on the same beat the following day, and was told by the keeper that one of the locals with whom I had been chatting, had taken a double figured salmon later in the evening, after I had left.

Sometimes you just can't find the right adjectives to describe your emotions! Or maybe you can and they are just not suited for civilised conversation!

I noticed that the river was up a foot because of the overnight rain with a darker - but not unfishable - colour in the water. What was interesting was that two new holding spots had appeared as glides mid-stream . The water temp had dropped 2 degrees since yesterday and was down to 7 degree.

So bigger fly and deeper fishing poly-leaders and lots of casting, but alas no salmon - only a very greedy 12 inch trout! 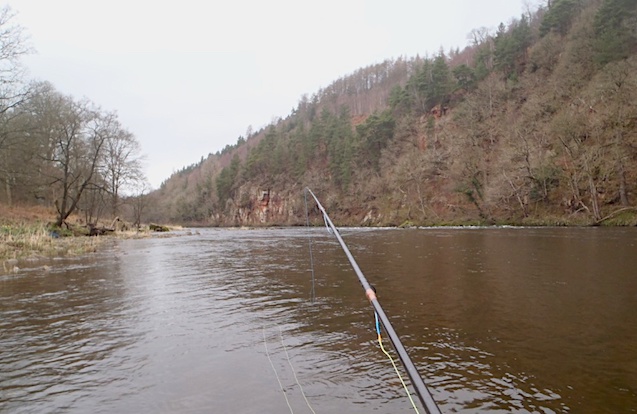 As anyone who has fished for salmon knows, the river Tweed stands as one of its most haloed and sacred grounds. Through a combination of fortuitous events, I was lucky enough to be invited to fish it for a day, which in itself was the culmination of a dream which I'd had for close to 30 years.

The drive from the Eden to the Tweed could have benefitted from better weather as it was extremely scenic. There were several stretches where it seemed as I was in the Highlands. I drove past other well known names such as the Teviot and Ettrick before crossing the famous bridge over Kelso, as I would be fishing on a stretch below Coldstream. 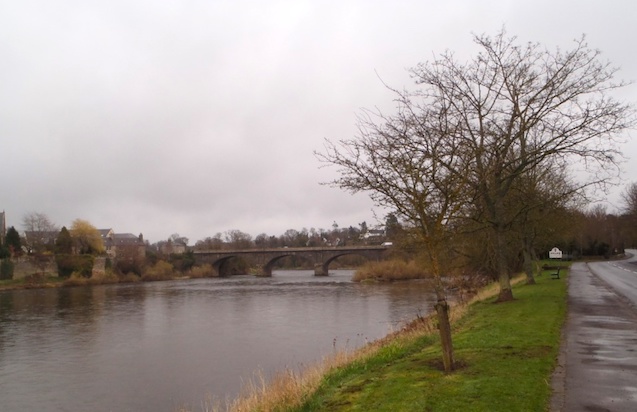 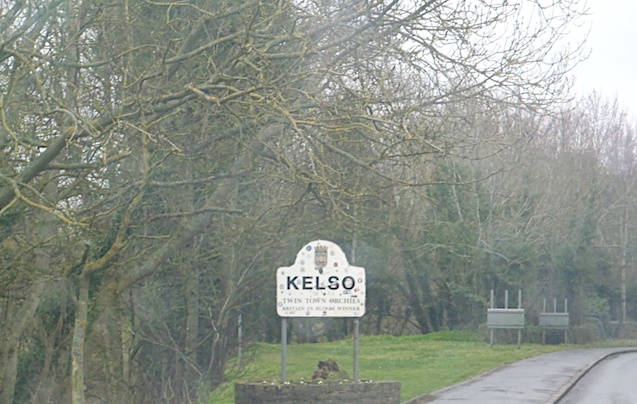 The next morning - still with a bitterly cold Easterly wind and a mere 4 degrees in the air, saw me ready at the beat hut. On this famous river with such history and tradition, I was sure that my old 16 ft rod with a long belly spey line would be just the ticket. In fact I had even contemplated purchasing a Harris Tweed outfit for the occasion but never gotten around to it!

But my friend who had invited me – and who happened to be one of the ghillies on the beat - shook his head and pointed to my 15 ft shooting head rod and told me that this would be the order of the day!

I needed a few moments to recover from this shock!!  I'm glad I didn't turn up with a double handed cane rod!  (Some of my acquaintances still fish with these on Scottish as well Norwegian rivers). But at least he felt that my Jock Scott was a good choice of fly!

​The next surprise (read shock) came when my friend told me that we'd be fishing from a boat! Or rather, that I'd be expected to double Spey cast whilst seated on a mushroom seat in said boat! He had been foul-hooked by guests in the past who'd tried overhead casting so he was having none of that. 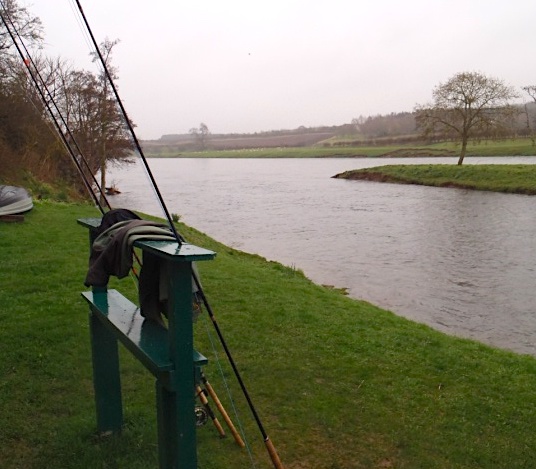 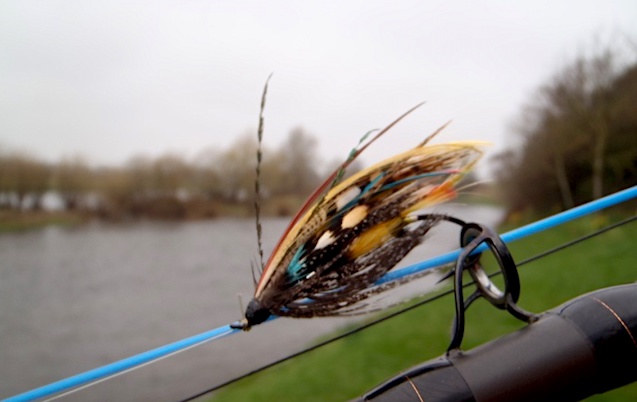 Because many of the good holding lies were in 15 ft of water, fishing from the boat was the only option for covering these effectively.

Add to this that I had to cast left-handed, because we were off the left bank, catching a salmon was actually the last thought weighing on my mind!

My greatest preoccupation was not to hook anything, or either of us, with a 4/0 salmon iron, having to time my upstream sweep of the spey cast with the end of the oar stroke, and dodge a tricky upstream wind. Whoever said fishing was relaxing….

It took some getting used to, and I must admit that in truth I never did fully acclimatise to this set-up, but it was nevertheless a great and fun experience, and I was extremely grateful for the opportunity. 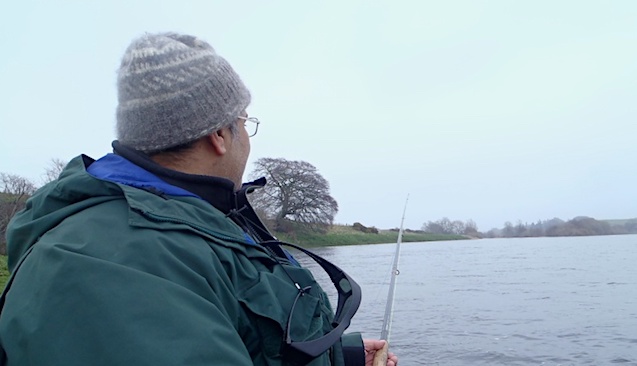