Pete Tyjas and pal Toby head north in search of some last minute grayling fishing at Wodencroft Holiday Cottages on the banks of the River Tees in North Yorkshire.

I take one final look at the grayling gently cradled in front of me, release my hands and watch it swim away. My grayling season had now finished.

Toby and I have travelled a long way for this moment. Our regular destination for grayling has been pretty much unfishable since early December. It had been too long and we decided a road trip was needed. 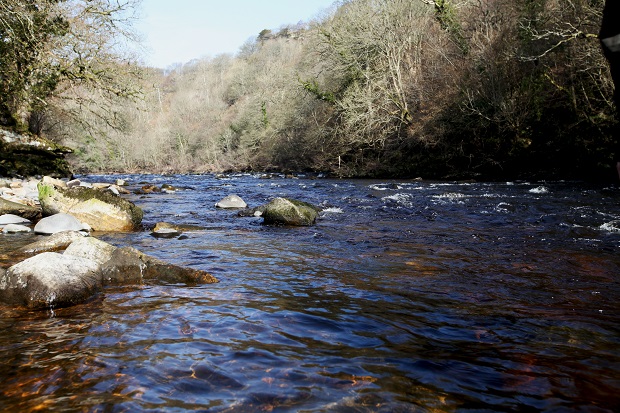 I had heard favourable reports about the river Tees in North Yorkshire, it was fishable, it had grayling and we’d found a cottage that offered either self-catering or B&B that has free access to 1 ½ miles of the river just a short walk from the front door. 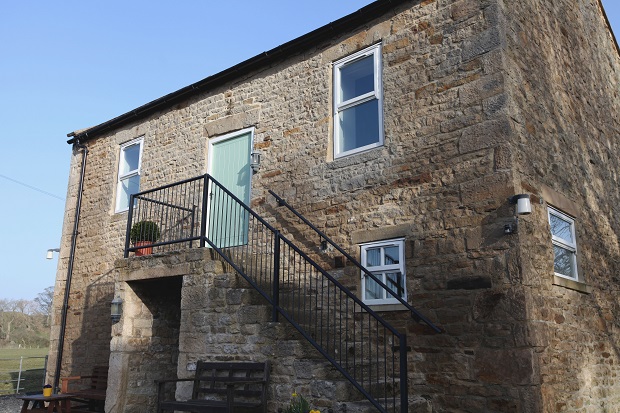 I’d left Devon mid-morning, picked Toby up in Taunton and some six hours later we arrived at Wodencroft Holiday Cottages.

After meeting the owners' representatives of the cottages, Debbie and Ted, who made us feel like old friends, we decided to walk down to take a look at the water. It was now nearly 6 o’clock and the temptation was to make a few casts in the mouth-watering run we’d been looking at. But we knew we’d fish like deranged maniacs if we did, having been cooped up in the car for so long, so we decided to have something to eat and relax. We’d be fishing long and hard the next day. 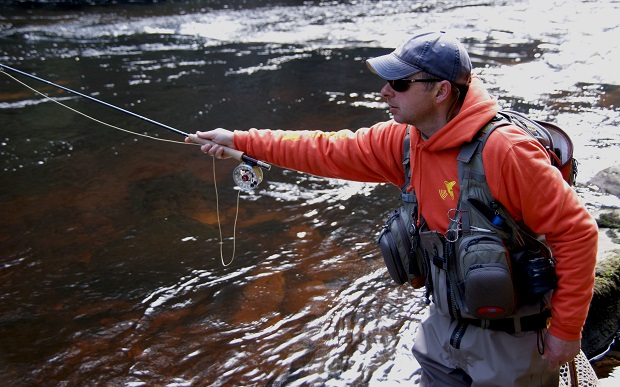 We also met Angus, who jointly owns the Wodencroft Estate together with his two brothers and sister. He told us a little about Wodencroft, which had been in the family's ownership since the mid 1950s.

There are cased brown trout on the wall of the farm that had been caught from some of the pools marked on the beat map we’d seen earlier. Several 2lb+ trout looking down at you from behind the glass lets you know you are in the right place. 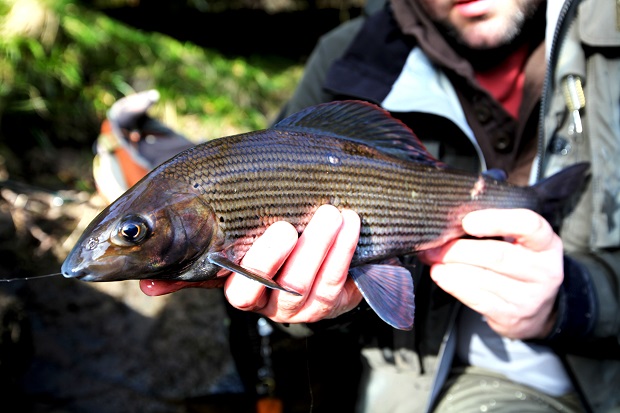 Angus guides grouse on the moors and I instantly felt an affinity with him as a fellow guide. He is a softly spoken, thoughtful person who loves fishing and the outdoors.

They had obviously thought hard about the work renovating Dairy Cottage, one of the two cottages available. The three rooms sleep six people and all have ensuite facilities, but to me the important thing was they have ensured the cottage has a home from home feel to it. Ted had knocked at the door to let us know that there was plenty of wood if we wanted to have a fire and so we did just that. 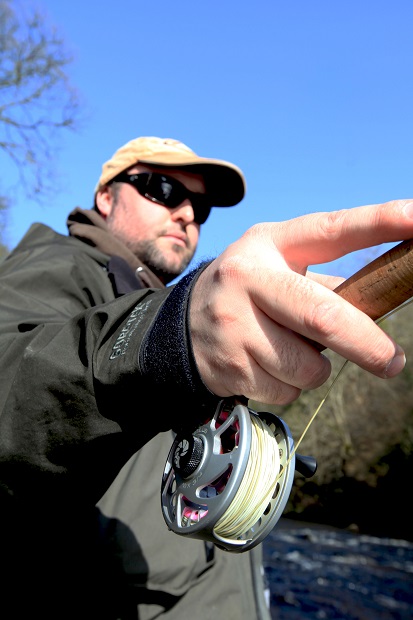 You can tell Debbie’s touch too: robes on the bed, milk in the fridge and plenty of tea and coffee as well.

We slept well but were up early and excited. We’d gone for the B&B option and made the short walk to the main farm house. There was hot tea and coffee on the table and having let Debbie know what we fancied for breakfast the night before, it arrived on the table just as we finished our orange juice. Everything is sourced locally from the excellent sausages, bacon and eggs from the farm. The black pudding deserves a special mention too.

Breakfast finished, it was time to fish. We decided to fish where we had walked the previous evening and finding the best access points is made easy, just look for the wooden posts in the ground that have been painted white.

The river at Wodencroft is a mixture of shallow riffles and deep glides. If you have fished in Wales, think Usk. The river is wide and so a 9 to 10ft rod for trout and grayling is perfect. The river bed is uneven in part and so a wading staff is a good idea if you are unsteady on your feet.

The morning was cool and with little happening we set up 10ft rods with long leaders and two heavy bugs. I headed to fish the head of a pool and Toby worked a tail and belly of a pool just upstream of me. The water was cold and I fished the head of the pool quickly and walked upstream of Toby a short way to fish some slower water. 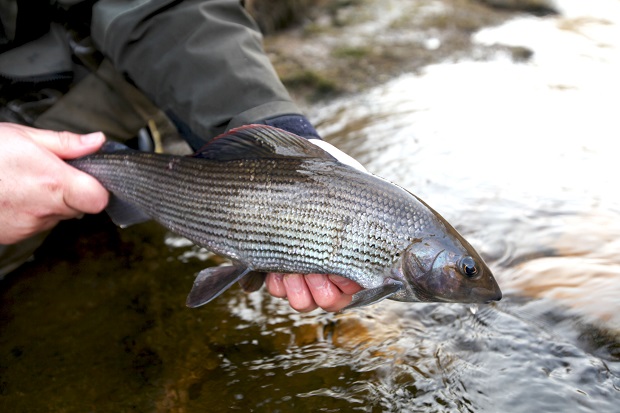 I landed my flies on the edge of a foam line running down a channel of what looked like 4ft or so. It worked, my indicator dipped and I struck. The fish was strong and pulled off line as it first went upstream and then headed down. I caught a sight of my first Tees’ grayling now in my net. 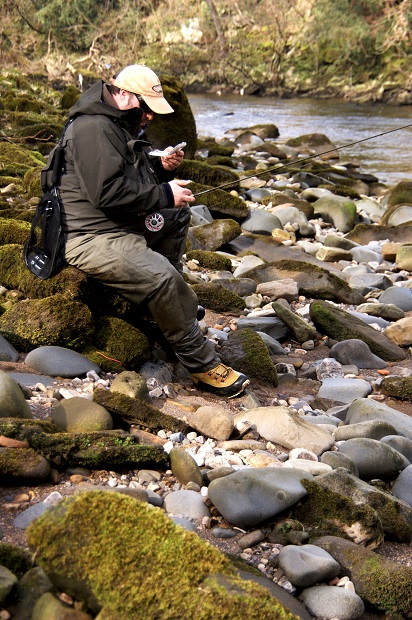 We continued to work slacker, slower water or the seams of runs and it began to work. Toby caught a similar sized grayling followed by a small trout that was still a little lean but eager to feed and build up weight again after spawning.

We explored as much of the 1 ½ miles as we could but didn’t fish it all. We had another day and wanted to keep some back.

That evening we’d arranged to meet a friend of mine, Daran, who lives locally and knows the Tees well. He had heard of the water but had never fished it. We met that evening in nearby Barnard Castle at the excellent Bengal Merchant Indian, ate well and talked fishing.

After another excellent breakfast the next morning Daran arrived and we walked upstream planning to fish where we finished the day before. We had to physically drag Daran past some of the pools but it got too much for him and he decided he wanted to fish one of them. It was a good choice, Toby had caught fish from it yesterday.

The bright sunshine and clear sky of the previous day had been replaced by clouds and an ominous sky. But it was dry and stayed that way. I worked a pool that had a small back eddy between two fast runs that formed the head. I saw a lone Large Dark Olive skitter across the water, then another. The few became larger in number. I change the caddis bug I had on my point fly to a flashback pheasant tailed nymph with 3mm tungsten bead. I cast my fly into the slow water of the back eddy and watched its progress while keeping my rod high avoiding the faster water of the main flow. 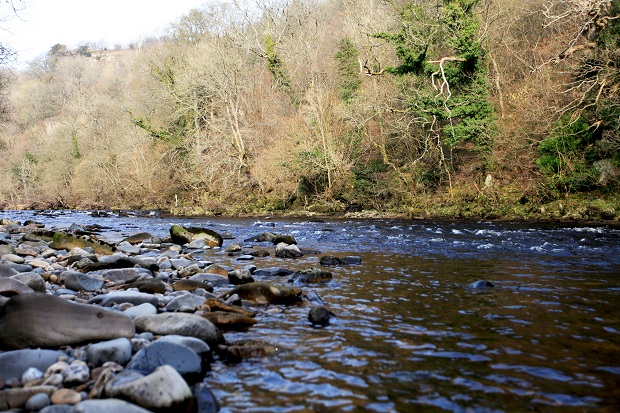 The take was a hard one and the fish was sizeable and strong. It was a grayling that rolled near the surface and was gone. 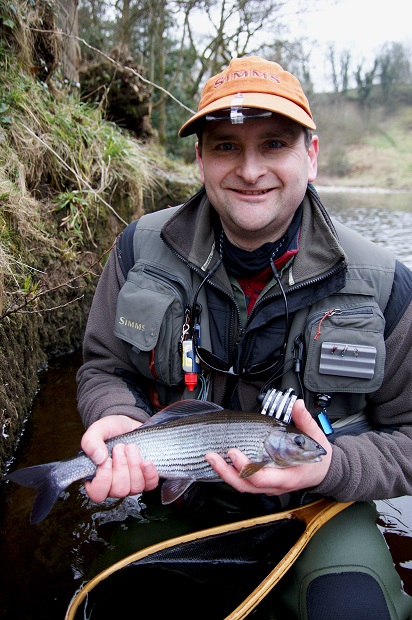 I sat down for a few moments and watched Daran and Toby fish just a short distance apart. My timing was perfect as Daran called having hooked a grayling. Fish landed and photo taken I asked him, as a veteran of the Tees, what he thought of the Wodencroft water.

He liked it, very much. It was the variety of the water that interested him, he went on to say it lent itself to just about every technique of fishing you could think of from standard dry fly to spiders via Czech nymphing and everything else in between.

Some of the pools look like they could hold some seriously large trout and grayling and from July onwards salmon appear on the water too.

If the river is out of sorts there is fishing for brown trout on Cow Green reservoir and there are rainbow trout lakes too. For the non-angler there is plenty of walking nearby and Barnard Castle is just a 10 minute drive away.

Dairy Cottage is available for long weekends (Fri to Sun) and weekly bookings with the fishing included free of charge. There are no day tickets which means the river will never be heavily fished.

I loved the whole set up, the people behind it and the fishing too. Will I go back? I am about to plan another trip up there with a group of friends in the trout season.