Riverkeeper Donny Donovan gives us an insight into how he manages his stretch of the Test and how he questioned what was percieved as the correct approach to river management.

“Start at the top nipper, and finish at the bottom. Anything looks green or thinking of growing, raze it to the ground! Should take you about a fortnight.”

I was in awe of this old keeper, he’d been on the river all his life and surely knew everything there was to know on how best to look after a chalk stream beat but even to a young, starry eyed under keeper desperate to learn and obey, cutting down fringe at the end of the fishing season seemed like a pointless and damaging thing to do. Still, as an under keeper in those days you did as you were told and wouldn’t dare question the head keeper or his forty year's experience.

“Putting the river to bed Donny. That’s been October’s job for two hundred years, short back and sides. Always remember that.”

Thirty years later looking at my beat on the top of the Test in autumn time I wonder what the old boy would think. He wouldn’t be impressed. He’d probably say it looked like an overgrown mess and accuse me of being an idle sod. The fringe still standing, the ranunculus not scalped to within an inch of its life and the cress and water celery still reaching out into mid stream. He’d probably shake his head in disbelief at the large numbers of grayling on show (looked upon as vermin in his day and a vital part of his duties to blow them from the water using his trusted 12 bore) and as for the dozen or so fallen trees left anchored to the river bed? Heaven help us.

Breaking with age old traditions is always a tough thing to do especially so on chalk streams completely enveloped in the history and mostly out of date bullshit of fly fishing. As a relatively young keeper on the Test, I found the thought of upsetting the apple cart a sobering one and was swayed in what I really wanted to do by not wanting to question an old keeper's lifetimes worth of experience. I have a great interest in the history of the rivers and the keepers that have worked them but have little time for pointless tradition.

I have also felt extremely privileged to have worked with many wonderful old keepers on the Test and Itchen who have taught me many things – both good and bad – and wouldn’t have changed my river keeping apprenticeship or the keepers that taught me for anything in the world. That said, there does come a time in your working life where you feel confident enough in your own ability and experience to change things where necessary although a thick skin may be needed. The odd smirk or raised eyebrow that appears on the old timer's face when you change something he’s been doing for forty years is always an awkward moment. 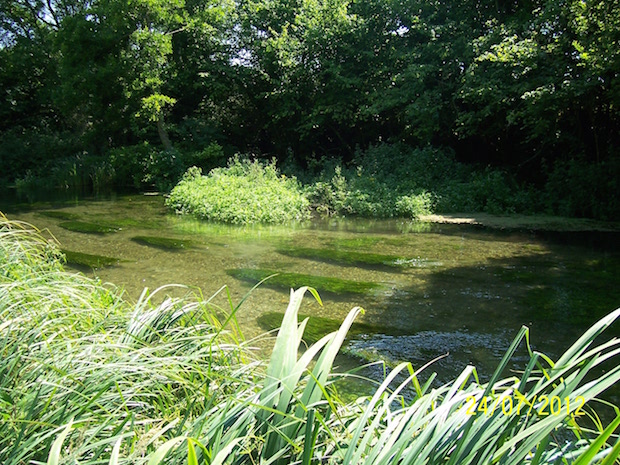 Much of what river keepers are taught on the chalk streams has been passed down through generations and until recently was rarely questioned or challenged. Like I say, it was not the done thing to voice an opinion or perhaps suggest a new idea or different thought. I remember a few keepers trying different things twenty five years ago before the birth of all these greener, soft engineering consultants and they were largely ridiculed and thought of as being somewhat eccentric and weird.

The chalk streams, in my opinion, have been held back by some of this traditional way of working practices and doing things in a very certain way because, ‘they’ve always been done like that.’ Thankfully things are changing, albeit slowly, and there has been a more general acceptance on different thoughts of chalk stream management in the last twenty years than in the previous two hundred although that’s not to say that everybody is in harmonious agreement.

Organizations such as the Wild Trout Trust, a more sympathetic Environment Agency and a newer breed of greener thinking riparian owner who allow their keepers a wider rein to manage the rivers for the wildlife as well as the fishermen has helped to change our rivers for the better.

The stocking of fish, wether diploid or more recently triploid, is another practice that has become traditional rather than sensible although that too is slowly changing. Nowadays people question such practices and have begun to experiment and change ideas, try different methods and we’ve been surprised by the results. On the beat that I look after, immaculate records of numbers and size of fish stocked and caught have been kept for about fifty years. Invaluable data which now makes very interesting reading.

Hard to believe I know but, over the last five years we have decreased the number of fish we stock by about twenty five percent. The number of fish we catch has hardly changed at all. i.e not significantly gone down like you’d presume it would. Surely not I hear you cry? In 2009 we stocked 550 fish and caught 328. In 2012 we stocked 400 and caught 316. Exactly the same fishing pressure, similar conditions, same size fish etc. I promise you there is no hokey pokey going on here - just accurately recorded numbers of fish. The beat has over the last five years been made much more ‘wild fish’ friendly that I think has made a big difference and admittedly I’m trying to judge whilst not wearing rose tinted spectacles, all have commented on a tremendous increase of wild fish present.

The final piece of the equation and probably the most difficult to get on board? The paying fisherman, the punters, or rather – their traditional expectations.

Fishermen need to recognise a properly managed chalk stream that looks after the water and its inhabitants first and foremost, is very different to what is currently being offered on many beats. Fishermen shouldn’t have to necessarily lower their expectations but they most definitely should adjust them and accept that changes to the way we manage the chalk streams will mean a change to how we fish the chalk streams and what we catch out of them.

An entirely different topic I know but not all fishermen will be satisfied when told that the two wild brownies that have taken them all day to catch are worth ten, five pound stocked rainbows. Not all fishermen will appreciate having to clamber through a longer fringe or have back casts made more difficult by overhanging branches. Not all fishermen will initially understand that what is being done to encourage wild fish and to improve habitat might make the fishing a little more challenging for them.

The list is long but an acceptance on what to expect from a day’s fishing on a well managed, greener, dare I say more modern and up to date chalk stream beat, has to change hand in hand with the way that we are beginning to look after our rivers. It might take a while but eventually I think we will leave a much better traditional way of looking after our magnificent chalk streams than we inherited although we must make sure that the dust that has been blown off in recent years doesn’t settle too quickly. Thoughts on southern chalkstream management must continually evolve and perhaps a keener glance at how things are being done in the more northern shires of England would be a good start.

Donny has also written a fantastic book "Keeper: A Life Amongst Fishes And Those Who Catch Them"