Andrew Fowler writes from South Africa about a new river he'd spent researching. It involved a long hike in but was it worth it?

As we climbed into my pickup yesterday, I closed the door wearily and turned to Roy. “We have to up our catch rate buddy!” I said.

Roy and I were exhausted. He had been up since four, me since five, and we had been walking, fishing, and clambering about for ten hours since then. Looking on the GPS later, I see we did ten kilometers of this, and it was in mountainous country. 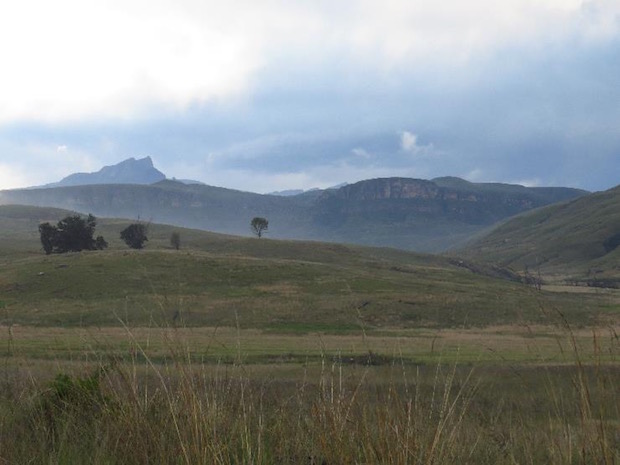 Our trip last month was in a valley to the North.  There we drove off the district road, through the open veld, to a spot where there is a dubious river crossing.  We first scouted this route on google earth, and we have done it a few times, so we now know where to turn off. The river crossing is dubious, because the only thing I have seen crossing there was a team of oxen, led by two herdsmen. 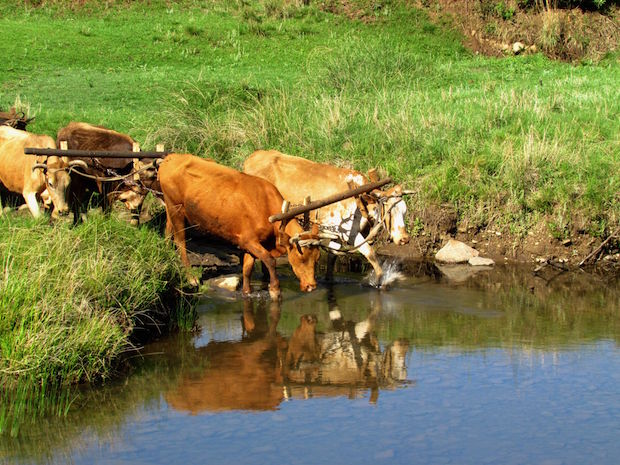 We have decided to give it a skip, because if we don’t make it, help is a long way off. In fact help might as well be non-existent, because no one knows this spot, or that we have gone there. So we park in a depression in the ground beside the river where the vehicle is invisible from anyone but a passing chopper (are there are none of those), and then we hike. The first time, I left a note on the windscreen stating where we were headed. I figured that if it all went wrong at least they would be able to retrieve our fishing tackle to pass on to our heirs. Now the place feels more like home. We have hiked it several times. And we have caught one trout so far. 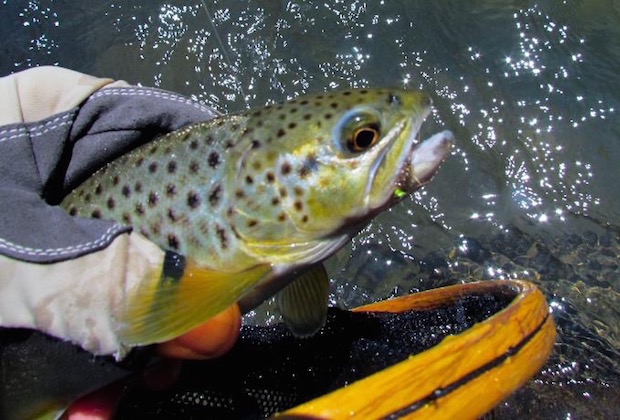 The first time we hiked up, my son and his two friends came along to take pictures. It was midsummer, and it was thirty degrees C before we had made the second river crossing. We chose the south bank, and walked higher and higher. Roy didn’t say much, he was huffing and puffing too much, but he must surely have wondered why we didn’t just fish the river right there. But I reasoned that the water was a little off colour from the recent spate, and if we could just get in a little higher it would be really great up there. Just a bit further. Maybe around the next bend we would cross a tributary running strong and off colour. Then we would go a couple of hundred yards and get in there.

At around 9:30 Roy was drenched in sweat and not looking too strong. Neither was I mind you. I realized we hadn’t had breakfast. So we stopped, and dropped our packs and found the slight shade of a protea. There we ate something. Roy’s was yoghurt eaten with his fingers. Yes, it was difficult. He had left the spoon at home. 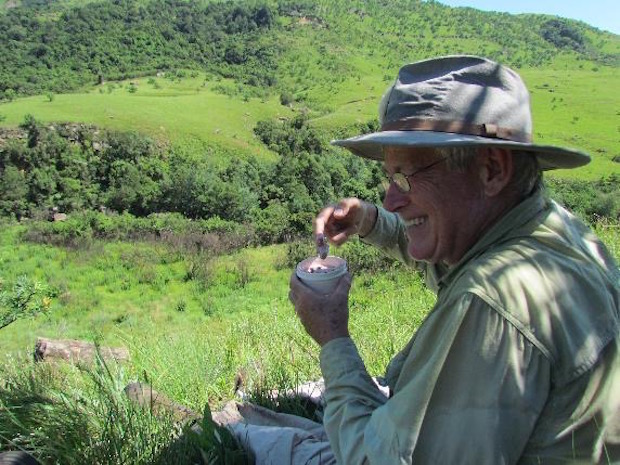 A little further up we entered the river, out of exhaustion mainly, and with a need for cool water about our legs. We waded and fished what turned out to be the most difficult section. It is in a steep gorge, and it is heavily wooded, to a point where you can’t get through. There are simply too many tree stems, and boulders the size of  double story houses. On our return I again used the GPS and google earth, to see that we had stopped just four hundred meters from the top of the gorge, and what looked like much better water. My son’s friends suffered mild heat stroke that day, and left without saying goodbye. We haven’t seen them in months. 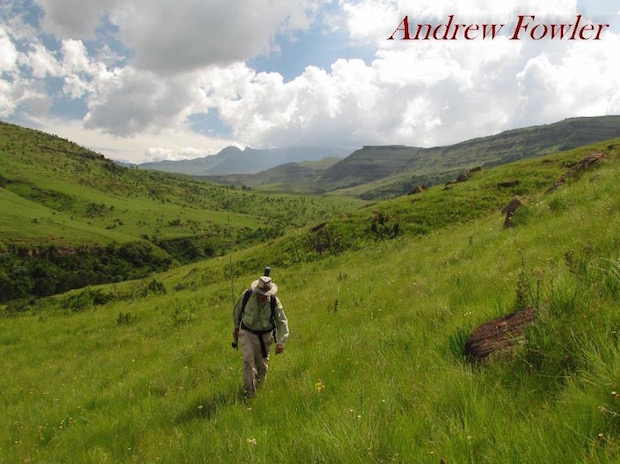 So the next time, I roped PD into joining us, and we hiked all the way up to where we had finished off the time before. I lugged in the pack, complete with the kit required to make a decent cup of filter coffee. It was about two degrees cooler that time, but we did around fourteen kilometers that day, and caught nothing at all. When we were back down at the pickup, PD saw a fish of around two pounds cruising up the river when we crossed. “Why couldn’t we just fish here!” he protested.

Roy was drenched in sweat again and I was worried about him. It’s not that he is old, but let’s just say that once when we stopped to change a tyre for two busty blondes stranded on the roadside, one of them referred to him as my dad.

On the third visit, we did stay lower down. In fact we hiked down from where we parked and fished back up. We saw a couple of snakes, and it was pretty. 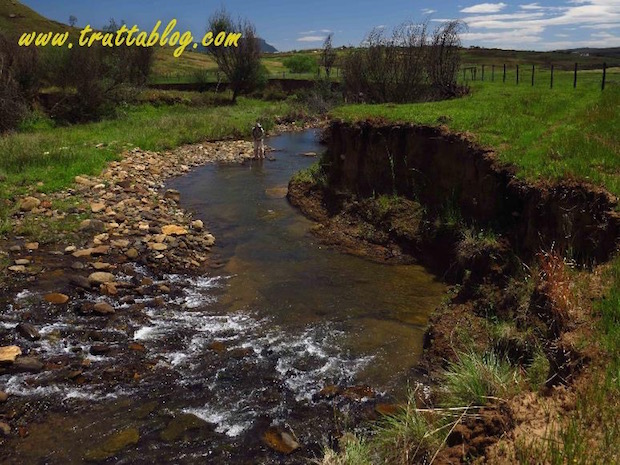 Roy saw two fish rising. But that was it….nothing caught.

In January I roped Graeme into accompanying me up one of these valleys. We set out in the mist and walked until the humidity had sweat pouring off us. We were shrouded in the mist, and at one point I lost track of just quite where we were. Graeme was looking a little jaded. “Just how much further are we going?” he asked.  We found the river eventually. It was in spate. It was rushing white and pretty, but there were no fish to be seen. 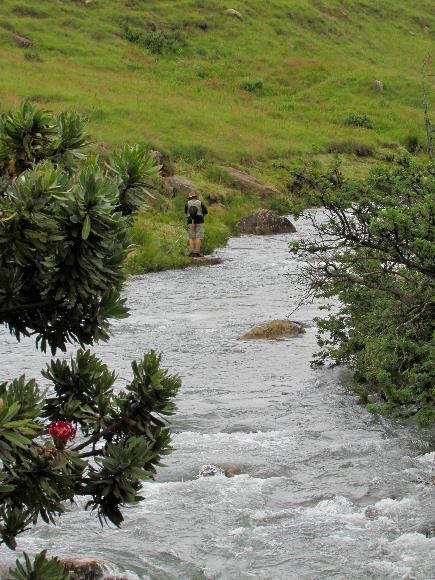 Yesterday Roy and I were back in the same spot. There were threatening clouds, and thunder rumbled on and off all day.

At one point I climbed a huge rock above a pool and below me I spotted two browns of around fifteen inches a piece. Magnificent fish for this little stream. 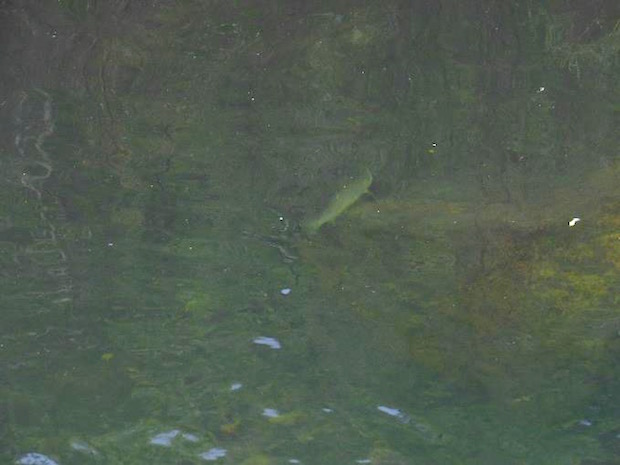 Roy was below me, working his way up the pool. I now had the challenge of signaling to a deaf man, as to exactly what I had seen, and where he should position himself and cast, including which way the fish were facing, all without waving my arms enough to scare off the two fish. Let’s just say that between the two of us we failed.

In our ten kilometer hike we caught but one little brown. A tiddler. 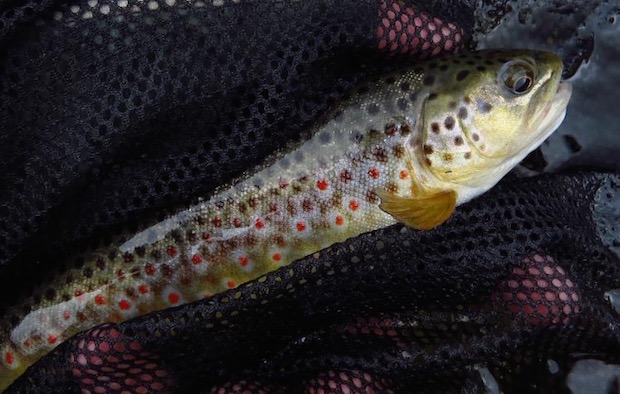 But what a pretty tiddler it was. And the river was a picture of perfection. Around each bend another vista would open up, and I was reaching for my camera, and thinking of how to describe this mountain beauty to my wife when I got back. 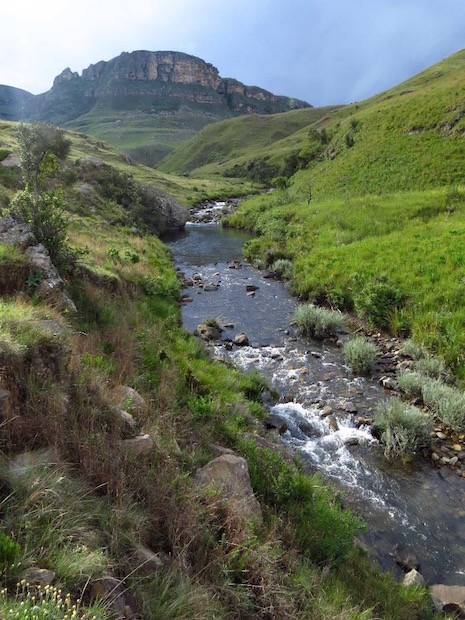 The water was crystal clean, and shafts of light broke through the clouds a few times, spilling golden light across the pale river bed. We spotted a few fleeing browns, and over our almost ceremonial cup of fine filter coffee, we spotted a double collared sunbird. Roy had an experience with a strange Reedbuck that went for a swim in the river in front of him, and although we got drenched in heavy rain at one point, no one was struck by lightning, or pummeled by hail.

When I got home my shoulders were bruised, and I had to take a slow day to recover from a bit of dehydration. Following Roy’s alarm at the weight of my pack, I just thinned down my kit, and weighed in the items I had removed at a full kilogram. Now I am ready for next time, and I have been back onto google earth to find the next remote valley.

When I showed my wife my pictures last night she said “Wow, that water looks so beautiful, you just want to dip your head in there!” 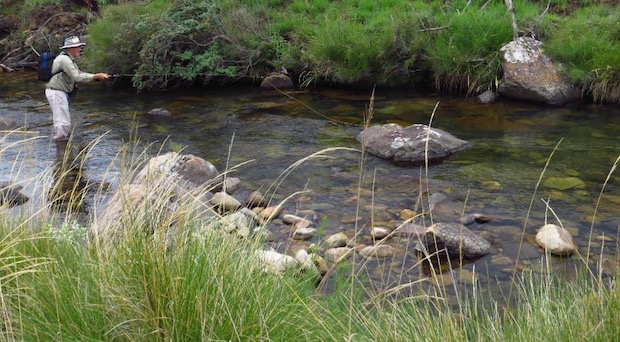 I agree, but lest we be thought of as a little silly, we prefer to stand in there and wave a stick.

To hell with our catch rate.

Andrew has an excellent blog that has some great stories, pictures and poetry