This month Nick Thomas give us The RODEO (Reverse Organza Devaux Emerging Olive); a dry fly to ride the ripples.

“The idea of waiting for something makes it more exciting”

“Let us learn to appreciate there will be times when the trees will be bare, and look forward to the time when we may pick the fruit.”

One of the great things about fly fishing and fly tying is the anticipation. Thinking and planning for the seasons to come and the ability to fish in your mind as you sit at the vice in the winter with the wind and rain lashing outside. Standing up to your waist in a freezing river Czech nymphing for grayling, having lost touch with your feet and looking forward to when all you’ll need under your waders is a T-shirt. The looking forward and the waiting, and the constant learning is what makes fly fishing so attractive to me; there’s always something new to think about and appreciate.

If you don’t tie your own flies then with spring approaching it’s a great time to start. At this time of year I’m looking forward to warmer weather, insect hatches and dry fly fishing, so I’ve been replenishing my stock of one of my favourite dries. The RODEO is a generic pattern suggesting an emerging lake olive, blue-winged olive, olive upright - or anything else struggling to get the hell off the water before being eaten that will be of interest to trout, grayling or other rising fish.

The RODEO was developed last year and has produced some good results for me on the rivers and lakes. It’s based on the Devaux hackle tying style from the Jura in NE France which is very popular in its home country and in Italy for fishing for difficult trout on gin clear limestone streams. A similar cone of deer hair is also used in the widely used Funneldun variants. 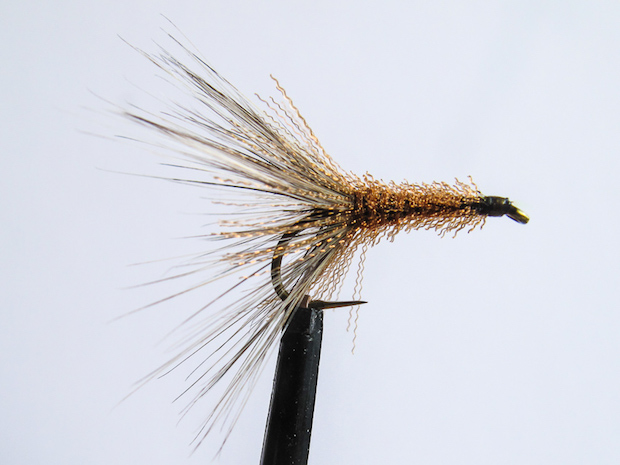 Tying the fly in reverse makes it easier to tie and it’s an ideal pattern for a beginner to tackle as an easy and productive fly. Tying the fly conventionally with the hackle sloping forward over the hook eye requires the fly to be tied in two stages with tying stopped after winding the hackles in order to fold them forward and then restarted to work on the body finishing with a whip finish behind the hackle. Working in reverse to tie the RODEO means that all tying operations are carried out in a single continuous sequence with a single length of pre-trimmed organza forming an impression of the legs and hanging abdomen of an emerging insect finishing with a conventional whip finish at the hook eye.

Unlike many conventionally hackled dry flies the RODEO doesn’t need expensive top grade genetic hackles to work well; a cheap Indian cape is fine. It’s also a great way of using longer hackles left on capes because the hackle points are too long. The sloping hackle works best with fibres that are around 50% longer than would be used on the same size of hook with an upright hackle. Winding the hackle need not be perfect either with all the fibres pointing in the right direction; folding the hackles backwards with a piece of plastic tubing prior to tying the legs and body quickly tidies up any wayward fibres. 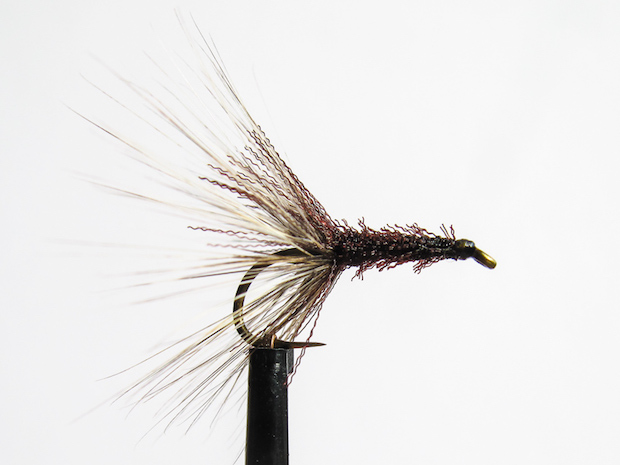 Use whatever combination of hackles and organza colours you like to approximate the insects on your waters. Bear in mind that the RODEO isn’t intended to be a delicate strict imitation – it’s a robust impression of food. Its purpose is to offer a good mouthful to rising fish and stay afloat in both calm glides and fast rippled water.

If you want to achieve a stricter imitation of a particular species of insect the cut organza can be coloured with permanent marker pen before tying in, using different colours for the legs and body if you like. I like to apply stokes of marker pen to the leg fibres as shown in the picture below which gives a nice jointed effect when tied in.

The RODEO is a forgiving fly for a beginner in the art of presenting a dry fly. The reversed tying allows Gink to be easily applied to the hackle to keep the fly floating on long drifts and the leader treated with Fullers earth mud to sink it. After tying on the fly degrease your tippet first by pulling through a ball of mud pinched between a finger and thumb of you right hand. Now squeeze some Gink onto the index finger on your left hand and melt it by rubbing gently between finger and thumb. Grasp your RODEO by the body in your right hand and sparingly apply the floatant using the fly like a paint brush rotating as you go to coat the hackles and legs. Doing it this way avoids the cross-contamination problem common to beginners of the two treatments getting mixed up; floatant getting onto the tippet by the fly and spooking fish with a floating leader and the fly sinking not long after touch down.

The Devaux and Funneldun styles of tying were both developed for fussy fish; fish who have seen it all and sneer and shrug at finely crafted olive and mayfly imitations with a ruddy great hook point hanging below them. The RODEO was designed with the same fish in mind; the hook bend and point are sufficiently shielded from view by the funnel of hackle and organza to tempt an enthusiastic rise, but not so shielded as to prevent hooking….. 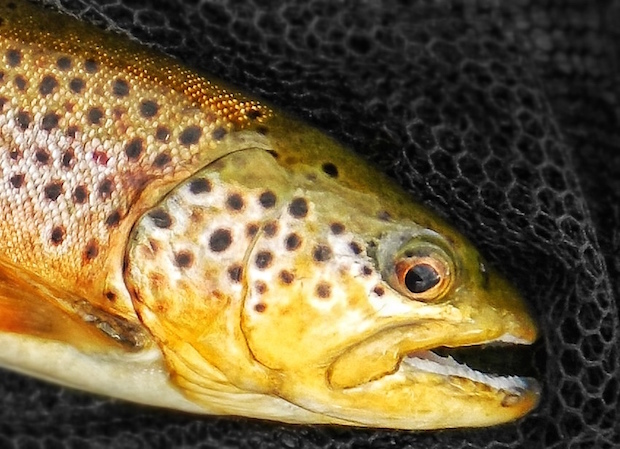