Wisconsin actually doesn't have 10,000 miles of trout stream. This often quoted number became 13,175 miles over the past few years, mostly due to improved farming practices, habitat protection, restoration work, regulations, stocking of wild strain fish, and other factors. That's quite a lot of trout fishing - to fish it all would take a lifetime!

Wisconsin is rich in trout streams in part due to its geography. Spring fed rivers and creeks fed by limestone and sand aquifers are common - without these cold waters the Wisconsin steams would be far too warm in summer to support trout species.

Unlike the UK, Wisconsin's fishing is wholly controlled by the state - you get one licence, which allows you to fish pretty much anywhere. Public land and access is common, and even on private land you can in theory fish. This is due to navigation laws - if your feet are wet you can wade where you wish, even through somebody's back garden. A whole year cost me just $35 including a trout stamp. So for cheaper than a UK rod licence you can fish an area the size of England and Wales combined - a bargain. 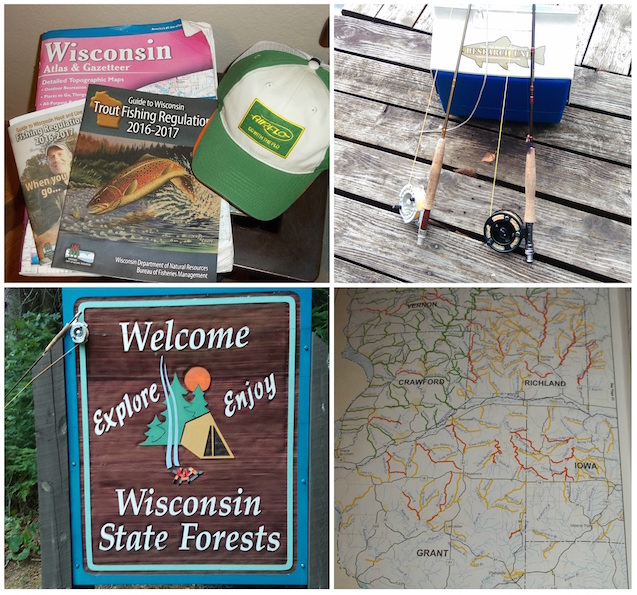 On this occasion, as part of a family visit in September 2016 I got to fish five different waters. So here we go, a little sampler of Wisconsin fishing, one stream at a time.

Situated just outside Madison, Wisconsin's state capital, the Black Earth is a true spring creek that in many ways resembles an English chalk stream, but in a more natural vegetated state.

I fished at the small town of Cross Plains, where the water was icy cold, full of watercress and aquatic insects. Limited to a baking hot afternoon, nothing huge took my flies, but there are certainly plenty of large trout in this stream that most locals prefer to fish for at night.

At the spot I fished (having just snapped a rod!) I climbed out of the creek hot and bothered, only to bump into a vending machine at the back of a car lot (only in America eh?) An ice cold root beer, change of rod and I was back in the game!

Most of the Black Earth isn't urban however - it flows through wood, meadow and agricultural fields full of corn and cows. It's a great creek with a big head of fish and easy to access. 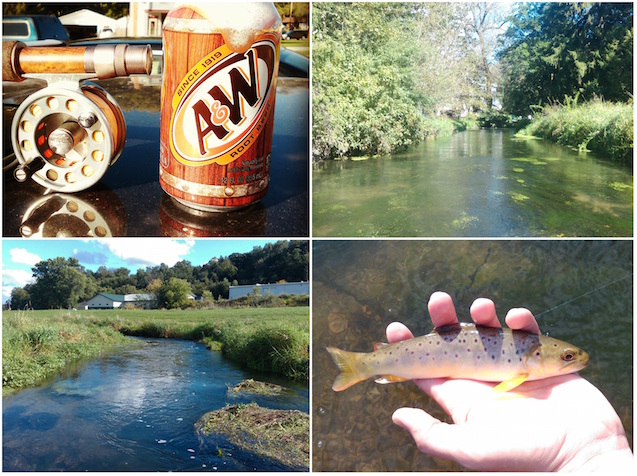 Travelling west from Madison you hit the 'driftless' - an unglaciated area rich in limestone bluffs, where trout streams literally riddle the regulations map.

Here, I had intended to try some famous streams in the area such as the Castle Rock, The Blue and Big Green, but unfortunately I found them the colour of chocolate milkshake due to a heavy overnight thunderstorm, something which can happen late summer and autumn.

The exception was Big Spring Branch Creek. As the name implies it is spring fed, and emerges from a hillside, most likely from an underground cave system. In Big Spring Creek's clear and cold waters I found a healthy head of browns, and also brook trout. It's a delightful stream, which meanders through lush meadow land. 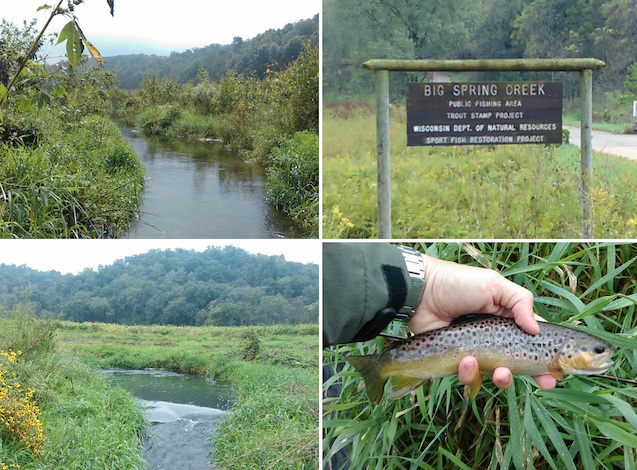 Duncan Creek flows through Chippewa County in the northwest of the state. This is a classic tannin- stained Wisconsin brook trout stream, ice cold and full of hiding spots.

Brook trout are the original native trout of Wisconsin streams and their numbers declined through habitat degradation and from competition with introduced brown and rainbow. Today they are making a comeback due to improvements in water quality and habitat - Duncan Creek is a fine example of what the Wisconsin DNR have achieved.

Brook trout are eager and aggressive takers, and in my mind are the prettiest of all the game fish species - I could catch them all day, regardless of size!

A quick visit to Duncan Creek resulted in 10 fine brookies to 13 inches - most took Woolly Buggers or Copper Johns twitched through some deep, weedy holding water. A spin fisherman we met on the bank had a bag limit of five brookies on a stringer that dreams are made of... some of them were way over a pound. I would love to spend some more time on this creek; it's a true brook trout heaven. 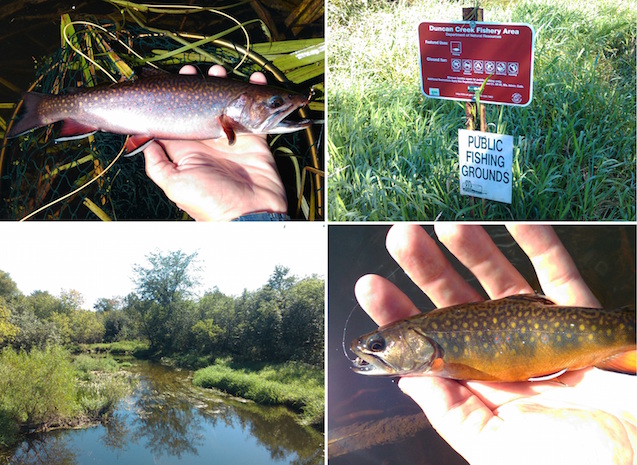 Another Chippewa county stream, McCann Creek is a meandering weed filled spring creek, full of small but beautiful brook trout. Drifting dry flies over clear pockets in the weed or tight to the swampy stream edges drew plenty of hits from these aggressive little guys.

I also caught a few creek chub - these are much smaller than our UK chub, and can be a nuisance as they take flies eagerly. They are however considered a sign of good water quality, and are a food source for bigger trout. 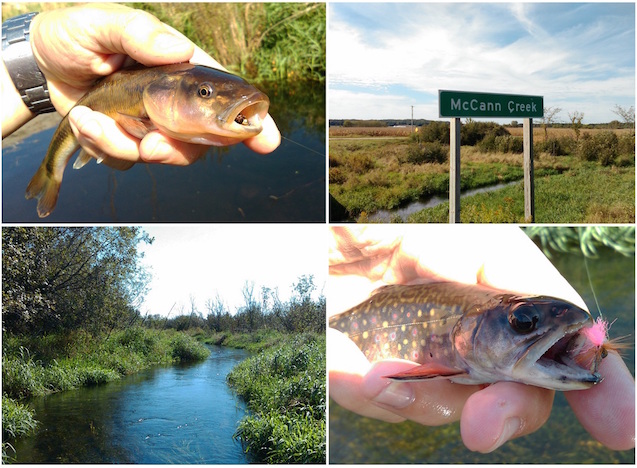 This is probably Wisconsin's most famous trout river. It holds brook, rainbow, browns, steelhead and salmon. Right at the northern edge of the state, the Brule is fed by sand springs and flows through Northwood’s boreal pine forest into Lake Superior.

I fished this one over a period of several days; a lot happened, so a separate article was needed for this river. For the full report, head over to the Fishtec blog post - Fly fishing the river of presidents. 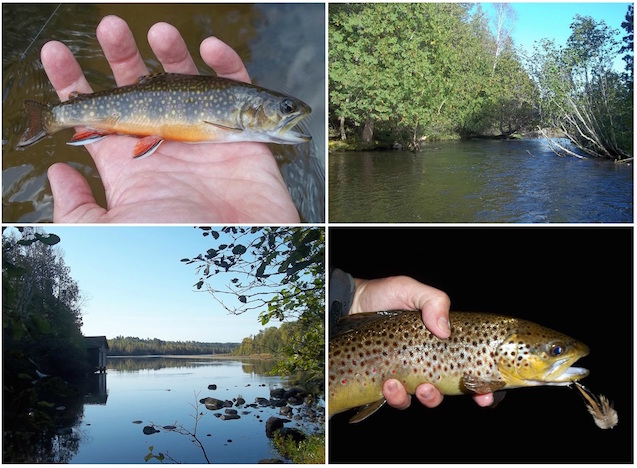 While Wisconsin isn't generally considered as glamorous a trout fishing destination as some other, more famous states, it does have is a huge number of quality trout streams. What I fished in a week was just the tip of a very large iceberg.

Having visited Wisconsin several times over the years I can positively say that if stream and river fishing is your thing, then it could be considered an unsung angler's paradise. So, if you ever find yourself in this part of the USA make sure you try a creek or two.