Defecting from regularly fishing Grafham, Peter Oldham has spent the last summer on a small spate river coming off the Pennines and through Cheshire. The changes in tackle, flies and tactics has meant a totally new learning curve, with a host of errors and new ways of trying to understand the wishes of the trout.

The river originates on the western slopes of the Pennines, springing from numerous underground waterways and aquifers together with run-off from the limestone hills, making it an invertebrate-friendly alkaline environment for numerous species. By the time it reaches the lower lands and approaches the Cheshire plain it has an added piquancy of acid moorland water before reaching the rich alluviums of dairy country. As it nears the beat of the local flyfishing club, where your correspondent has recently spent some time, it is meandering through wooded gorges and flat pastures, making a river with much character. Water levels can rise and fall fairly quickly, as the by now spate river is subject to rainfall many miles away in the Pennines as well as local weather.

Looking downstream, the water riffles into a nice trout holding pool, with bugs and nymphs being swept into the bank, where they are joined by various terrestrials falling from the trees. 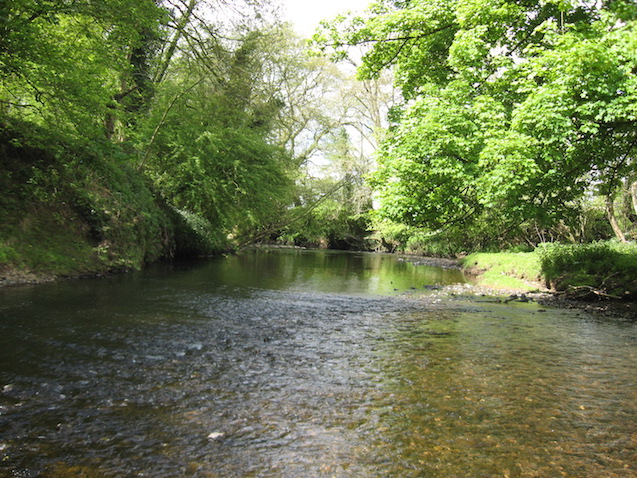 The trout are not large: a 1lb-er is a very reasonable fish, and there are occasional reports of 2lb fish but they are wild and wary and do not come to the net easily. With a rich and varied diet, including olives and the usual river flies (a good hatch of mayfly is reputedly normal for most years, although this year the hatches were meagre and sporadic: the fish did not really latch on to them or take much interest) the fish are strong and healthy. A mainly wild and indigenous breed, augmented with a sprinkling of stocked browns, which seems to liven up the inhabitants. Unfortunately grayling are not present (requests to the EA to allow stocking have been refused as they are not naturally resident here, although they are apparently further downstream) so when the season ends, it ends and the water can rest for six months.

Where the river runs through a wooded section, a fallen tree and the bankside trees and roots create what some would call “structure”, with a channel creating a conveyor belt of food close to underwater safety. Some of the better fish can be found in such areas. 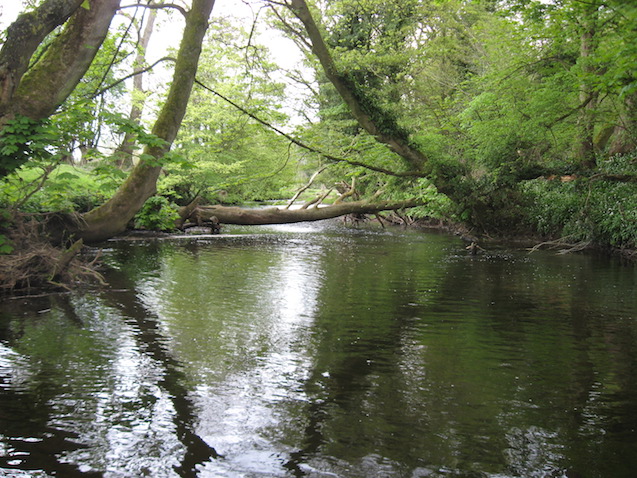 Because of the trees, a 7ft rod is quite long enough, even then there will be many flies left dangling in the trees. When the angler’s patience – or fly box – is exhausted, the riffles and glides through the pastures, with less bankside vegetation, can make life a little easier.

With over three miles owned and controlled by the fly fishing club, formed over 100 years ago, who have purchased river and access rights from landowners and spent much work on general river management, parking area and stiles, the river is a little delight.

Almost 200 miles from Grafham, and hundreds of miles in terms of fish and fishing, this goes to show the broad spectrum of the joys of angling, from the vast expanses and powerful trout of Grafham to the much smaller but equally feisty fish of the smaller spate rivers. Both places, and their inhabitants, are a delight in their different ways.