On a sunny September morning I caught the early train to Romsey in Hampshire, to fish the picturesque Timsbury no. 5 beat of the River Test. The reason? To test the new range of Helios 3 rods from Orvis. Now I’m not really one for fancy gear, but I’d had the pleasure of testing one of these out at the Game Fair back in July and I liked it a lot, so I was very excited to put it through its paces in a more suited environment.

En route I met with a new friend from across the pond, Rebecca Spencer, one of the three minds behind the Roving Dears. The Roving Dears are a Fly Fishing Collective who run a website and blog which aims to encourage other novices to get out and embrace new outdoor skills and to appreciate the natural world around them, so I was thrilled when she reached out to me after touching down in the UK. As another keen fisher she was hopeful for some tips and guidance as to where and how to try her luck on the water and as her request coincided with my invitation to the Timsbury Beat, I asked if she would join me. 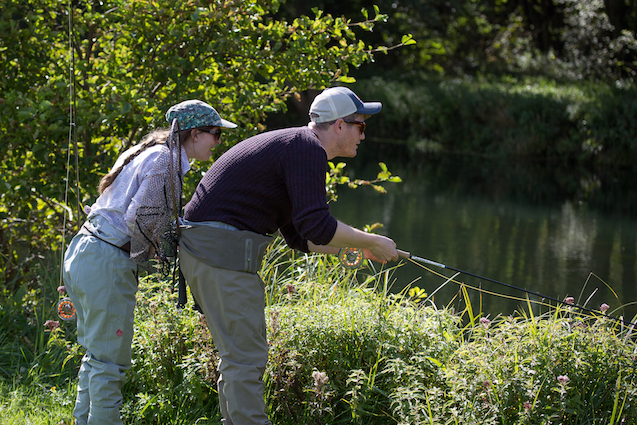 Upon arrival we were met with a variety of faces both familiar and new. Amongst those recognisable was fishing guru Paul Procter, Austin Weldon of GWCT, and Paul Sharman of  Fish and Fly. A new acquaintance was Nick Weston of Hunter Gather Cook who I thoroughly enjoyed spending time with that day. After a breakfast of muffins and coffee from Orvis branded Thermos flasks, Orvis’ Richard Banbury told us what to expect from this fantastic new piece of equipment. We learnt that the Helios 3 was the result of extensive testing which had led to a new, better combination of stiffness and strength meaning that the blank was thinner and more precise, thus creating a far better casting energy. The new material used at the tip of the rods is also of a denser fibre allowing lighter tips and a quicker recovery weight with maximised strength. What was particularly interesting to learn was that due to diligent manufacturing, each rod can be replicated exactly and identically which means that if in need of a replacement section one can be immediately sourced with minimum fuss! 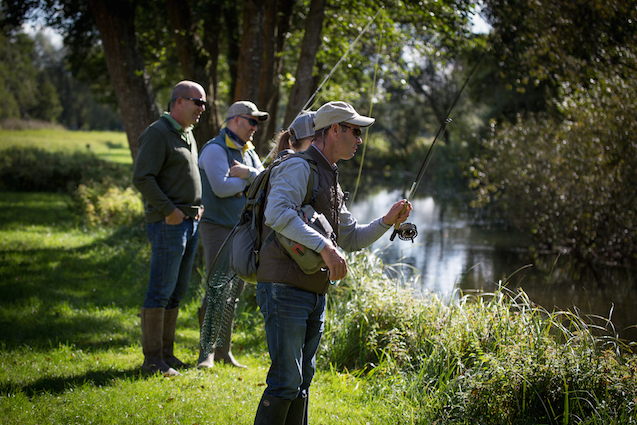 Ultimately we were hearing that the rod was stronger, lighter and more accurate than ever and I couldn’t wait to get out on the water and try it. The moment I claimed one of the Helios 3s for my own I could feel the difference. It seemed to move seamlessly with my own movements, almost like an extension of my own arm and with no additional weight. The rod's attributes, coupled with the beautiful conditions and a surplus of trout in the clear chalk stream made for a wonderful morning of fishing. 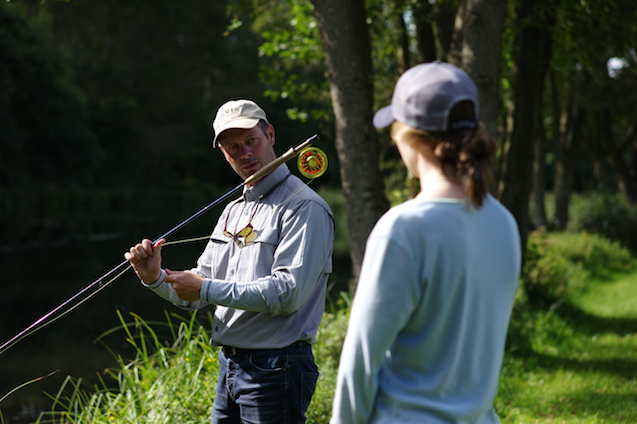 It was great to swap tips and techniques with Nick Weston and Rebecca and especially to hear more about other avenues of enjoying the outdoor world. Hunter Gather Cook is a foraging and cookery school that specialises in game butchery, wild cocktails and outdoor cookery all done exclusively over live fire and I learnt that Nick had recently put his skills to the test and won Boisdale’s Shooting Chefs award earlier that month. Not just a dab hand at fishing it would seem! The Roving Dears combines a love of outdoors and a respect for nature in order to embrace pursuits such as fishing and hunting and it was particularly poignant to meet Rebecca, who aims to inspire more girls to immerse themselves in similar sports, just at the time that Orvis was launching their 50/50 on the water campaign – a similar enterprise which promotes a 50/50 split of fisherman and fisherwomen. This chance meeting of like-minded people from different worlds truly rang of serendipity!

The day itself was a great success, as, in my opinion, is Orvis’ new rod. I’m eager to get my hands on one again and particularly look forward to giving it a cast at next year’s London Fly Fishing Fair where Orvis will have a stand! Thank you Orvis for a brilliant day and well done with the Helios 3 – I give it my highest recommendations!