According to legends the biggest fish are always found in the highest, most distant and hard-to-reach mountain lakes, or llyns as we call them in Wales. It is here that mythical, giant wild trout can be caught, fish large enough to grace a glass case.

I have heard of such places, read about them in the old books written over the years by  authors who visited and fished the Welsh mountain lakes. Writers such as Frank Ward in 1931 and Henry Cliffe 1860, right back to George Agar Hansard in 1834. They all spoke of remote waters that held 3 or even 4lb trout. 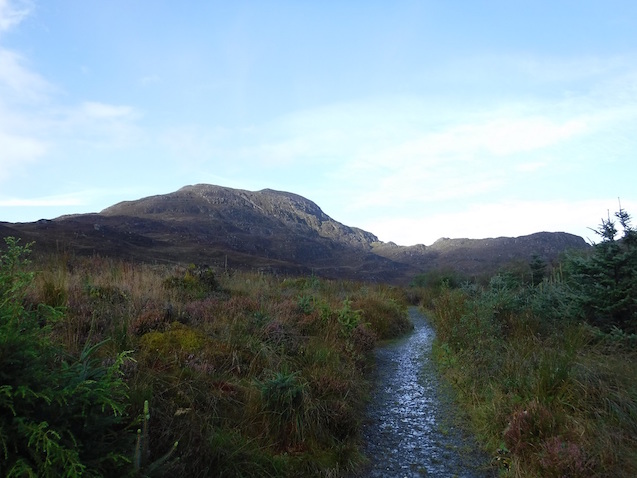 What was true then might just be true now, so I once decided to visit such a place, in the remote wilderness of North Wales. It must have been over a decade ago that I went there - a hot June day, bright as can be with not a breath of wind in the air. This lake proved a tough one to crack – nothing took my flies, but the fish I saw tailing and leaping clear of the water chasing damsels looked like fish that the legends spoke of. I vowed to return.

Some years later, the time finally came around when plans were made with an old fishing friend, Alan Parfitt, of the Gwent Angling Association. Alan, like me is an avid mountain llyn fisherman who wanted to give the mythical lake a try. Plans were laid and before the season ran out we set a date for mid September. I would drive and Alan would navigate us to the llyn, by a different route than my previous visit. This would involve a shorter drive time, a mere three hours from South Wales, with a trek of several miles from there into the mountains. 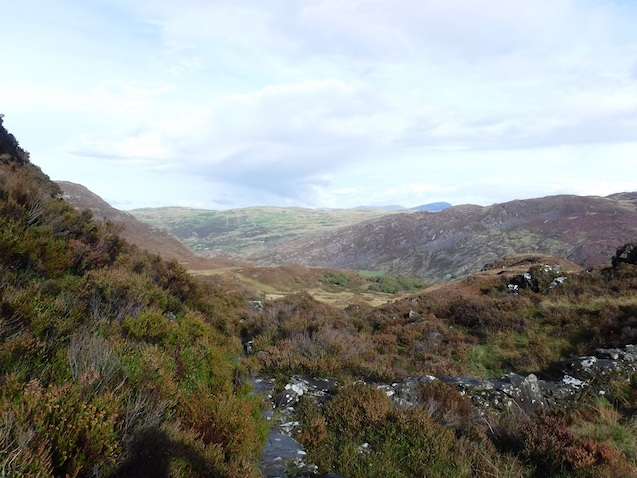 Now Alan is a really handy guide for such an adventure – we first met 20 years ago on the side of Upper Neuadd reservoir in the Brecons Beacons, where he helped rescue a mate of mine who was entrapped in a deadly bog of stinking, sucking red mud. A seasoned hill walker with a mass of experience in the UK and abroad, I was confident he was the man to get us to the lake in one piece.

The weather this September had, to be fair, been the worst I could remember. Heavy rain had drenched the mountains for days on end. We were lucky enough to miss the really bad stuff that had fallen in the days before, but the paths were more like streams in spate than terra firma. 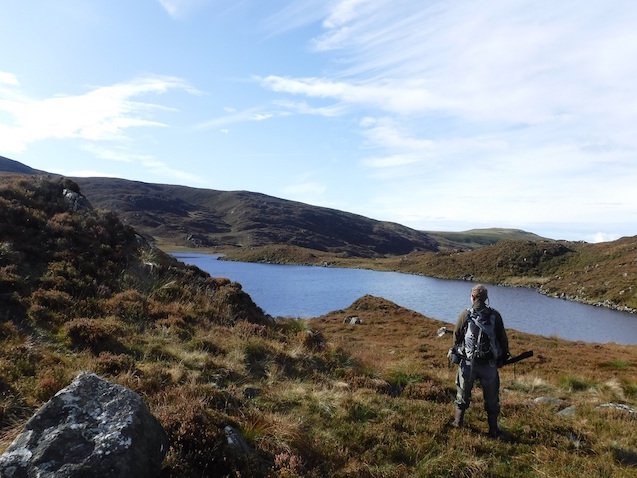 We set off into the wilds, both wearing waders, with me shouldering an Airflo Fly Dri rucksack with a float tube within - I wasn’t to be caught out if the giants were rising beyond reach, like they were the last time. Conditions were chilly that morning, but after a short while I was bathed in sweat as we climbed higher and higher.  Alan however was like a limber mountain goat. For a septuagenarian this chap can sure shift it. ‘’I can do 2.5 miles to an hour in rough terrain’’ and he does. I must admit, I struggled to keep up with the pace at times.

The views en-route was truly magnificent – we passed swollen streams, waterfalls, and went through a forest. As we climbed further, spectacular mountain crags reared above us with the treacherous path leading to a high cleft. It was from here that we traversed downhill, an open rocky vista opening before us. To reach the lake we took a sharp turn off the main route, following an ancient stone wall before we had to climb a steep and slippery incline to a high crag line at the far horizon. 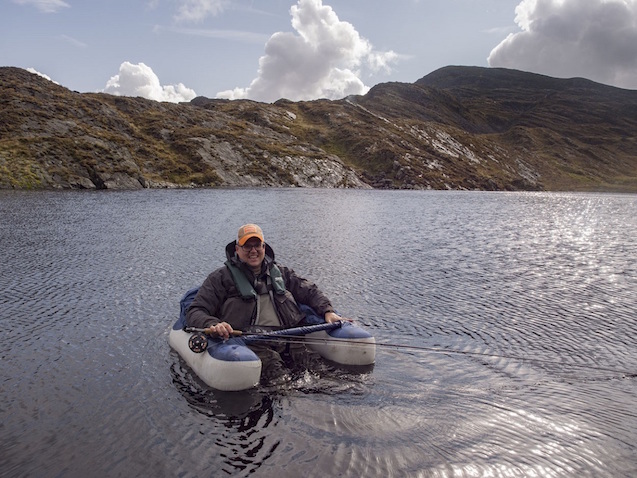 Alan was first to reach the llyn. Behind, I took out my camera and fired off a shot to capture the moment. The lake of legends was finally before us, after 1 hour and 30 minutes of rough, arduous trekking through some of the most spectacular terrain I have ever had the pleasure of walking through. It was a fantastic sight.

We took some time to study the lake over a cup of coffee – it was cold, with a fairly light northerly adding a chill bite to the air. The water's surface was pretty calm but nothing rose. All we could hear was the drip drop of water and raven calls echoing off the mountains; a truly atmospheric place.

After gearing up, I inflated the float tube and paddled off to fish the far side of the lake. It was perhaps the first time that a fishing craft of any kind had been launched up here, a true maiden voyage. Meanwhile, Alan fished along his bank in the traditional ‘walk and cast’ style. Covering water really pays off on wild lakes such as this. We both fished two flies, a traditional wet on the dropper and a woolly bugger on the point, hoping that the giants would prefer a bigger mouthful.

For what seemed like hours I cast along the steep and rocky far bank. The fishing was incredibly dour, the water sullen and seemingly lifeless. In the inky black and apparently bottomless water, huge rocks loomed out of the darkness at times, even far out in the middle. 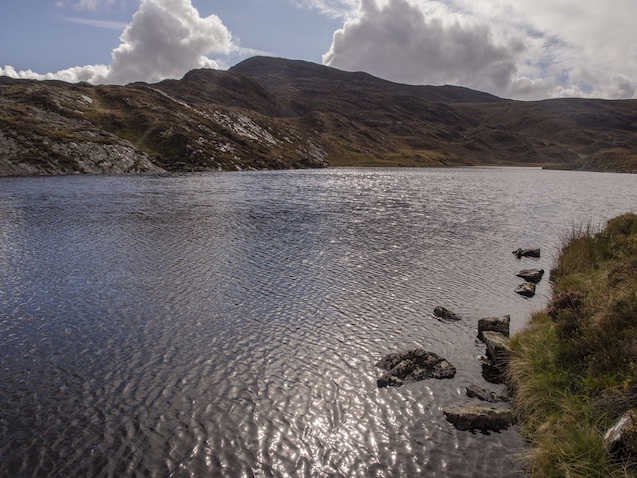 I cast to a rock wall and dibbled my dropper fly back to me for what seemed like the hundredth time. Below it the water finally parted and indicated that there were, after all, still fish here. I missed him, but it looked like quite a good fish to me....

Not long after, whilst fishing over a submerged peat bed just a few feet deep, Alan’s voice echoed over the water from the other side of the lake. ‘’Fish on, a good one, about 3lb!’’ I kicked as hard as I could towards him, trying to fight off a twinge of cramp. A few minutes later he came into view, perched over a rock outcrop. ‘’Is he still on?’’ I yelled. As if in answer the fish leapt clear on Alan’s line – not a 3 pounder, but something more akin to a salmon! If ever there was a jaw dropping fishing moment, here it was - in full technicolor.

At that moment time dilated, as it often does when playing a big fish. The beast was the like of which we had never seen before, or probably ever will again on a Welsh mountain llyn. Repeatedly the leviathan jumped, maybe 9 or 10 times, hitting the water with a huge splosh each time. It didn’t want to run or strip line, just shed the bothersome hook, that I could see embedded in its heavily kyped jaw.

Now the thing is, Alan did not have a net, and the bank was so rocky and steep that beaching the fish was totally out of the question - so it was down to me to do the honours. The battle went on for several minutes, yet he was not tiring. Alan tried in vain to get his head up as the fish dived about trying to rub the fly off onto the rocks. I could see every huge spot on his coal black flanks - there were just a few of them, surrounded by intense white coronas. 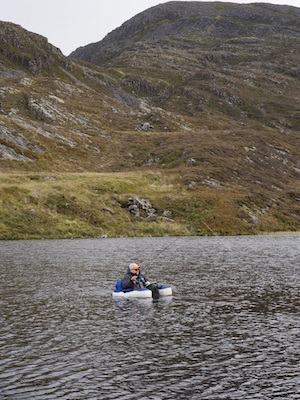 He came just inches away and I took an ambitious swipe with the net. Startled, the fish lurched right under me with unstoppable power looking to hide. As I kicked clear Alan’s dropper fly caught in the net mesh as the giant dived for cover.

At that moment the line instantly went ping – 5lb leader snapping like cotton without the rod to absorb the powerful lunges.  I made a grasp at the departing line but it was no good, slipping through my fingers in an instant. The monster was gone and time reverted to normal.

In a state of shock we both took time to reflect on what had happened. I was shaking with adrenaline, amplified by the cold chill of the water. I could not imagine what Alan must be going through. I blamed myself; I should have done a better job with the net.

We ruminated for a while on the subject. ‘’Well, I will be coming here again’’ Alan exclaimed. Alan was glad to have seen such a fish, the picture and taking a closer look just a formality for him.‘’It was worth coming just to see that!’’ He was right, it really was.

And the trout, how big was it? It would have easily graced a glass case above a pub fireplace. Prehistoric, dark, ferox like - yet broad across the back and fat.  We settled on 5lb, but somehow in the back of my mind I knew it was bigger than that....

We fished on for a few hours; but the fishing was as dour as any place I had yet tried. Despite a few juicy red sedges crawling across the water, activity was nonexistent. We didn’t see a single rise. 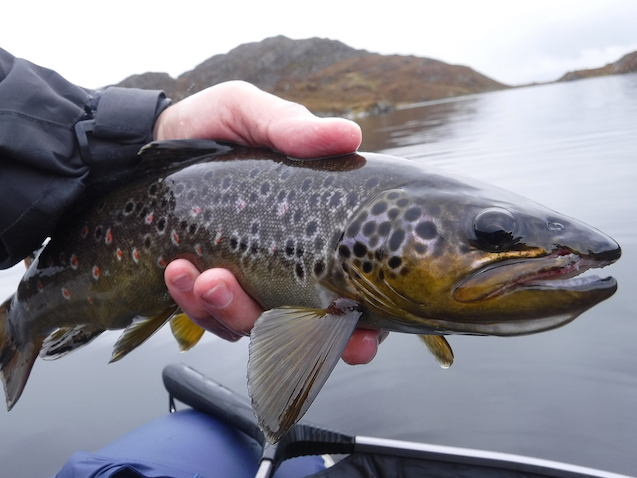 However we did not leave the water empty handed. In the spot where I bumped a fish earlier my line suddenly pulled away. Like its bigger brother it leapt clear and fought well - at perhaps a pound in weight, as dark and moody as the water it came from. A nice trout for a mountain lake. On the bank Alan was in, a small fish this time. And that was it as far as sport went.

Our return to the car was a long and tiring one, but all we could think of was the loss of the fish, its leaping dark form burnt into our consciousness. A new legend had been made.