As I’ve mentioned before, the purpose of getting in to fly tying has a greater range of reasons than the width of the Colorado River. With tying, comes consequences. Some of which you are very prepared for, such as your buddy pining over the loss of his favorite fly and hinting how cool it would be if you tied one up for him. Truth be told, it always makes me proud that someone finds my flies worthy to be on their rig. Perhaps I will feign the difficulty of tying one up for him but if I'm honest, I’m giddy and happy to do so (and typically, they aren’t so hard to tie). However, sometimes unintended consequences occur. It is during those times when something magical happens and all you really can do is take a step back and enjoy a moment.

I have a few rug rats that parade around the house. They have successfully made it to the ages of 10, 13, 16-years old. They have reached the age that having their parents entertain them is a last resort. However, I was pleasantly surprised when my now 13-year old sat down next to me and inquired in his own special way….”Why are you tying a fly?" As a trained scientist from a Jesuit University, I’m all about the scientific method and multitude of “whys?” which have been drilled into my children’s psyche of curiosity.

I don’t recall what fly I was trying to master, but anytime one of the kids show interest, I will simply drop what I’m doing immediately and bring them into the fold. It’s not because I’m a good father. It is the chance to find a fly tying / fishing buddy! I sat down the lad and proceeded to explain the intricacies of what I was trying to accomplish. A little dubbing here, a post here, some dun hackle there and he appeared to be truly enthralled at it all. Who knew?? Before I knew it, I had a pal at the bench.

But that was not the only fortunate unintended consequence that has occurred. Actually many have, but one that is nearest and dearest to my heart has been the opportunity to go from the student to the teacher. Like most families, there are favorite sports teams, family meals, even similarities in religious preferences. For me, it was soccer, or how my British friends like to refer to it, football. 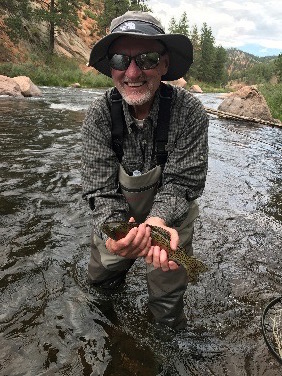 My grandfather played soccer before moving from Hungary to the United States. My father followed in his footsteps and by no coincidence, I followed in his. Soccer was the mainstay in our family. Regardless of other interests, soccer was a constant. I feel very confident in saying I was chasing a ball around the same day I learned how to walk. Of course, we grew older, everyone’s knees started to ache, and other interests emerged. For me it was fly fishing and tying. While my father was unaware of it, I was planning to make it his interest as well.

It started off innocently enough. “Come out and visit the kids”. “Let me take you on a river, the fishing is amazing here”. So I had him…quick yank of the line downstream and I hooked my father right in the top lip. Now it was just a matter of landing him, so to speak.

With the help of Jen, we organized a day-long guided trip, wading in some of the most beautiful scenery in the country (perhaps world, but I feel that’s more hyperbole than necessary). I requested that the guide focused on my dad. Not because I necessarily knew what I was doing, but it was about having an experience that many people never have the opportunity to enjoy. 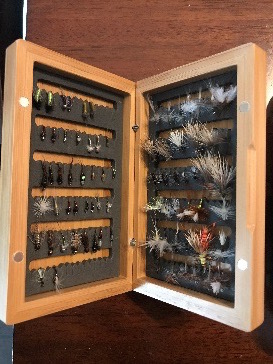 If you take a moment to think back to any of those strikes on your little size 18 BWO once it bounces down the riffle and settles into some glassy water, it was the same experience watching my father. I got him out to the river, but the river grabbed on tight and wouldn’t let him go. It was a day to remember and frankly at that time, I wasn’t sure if it was just being in the moment that he loved so much or an entry into a new hobby. We managed to net a ton of fish. Between my father, Jen, and I the numbers didn’t compare to the overall experience we had. By the time we made it home, I felt I defended by dissertation on fly fishing to my father as best as I could. Want to know where the million questions come from…it starts with the paternal mastermind, my Dad. We spent the rest of the weekend doing two of our favorite things; talking about fly fishing and watching English Premier League football. I don’t recall who played and to be honest it didn’t matter. We were busy learning the various knots my dad will take home with him as he tackles his local streams in the Appalachian Mountains.

Jen and I put together a little care package and sent him on his way home with a new 6wt rod and reel, a number of incredible memories, and a small box of flies tied by his progeny. I honestly don’t recall if he looked at the flies per se, but the overall experience was about all he could handle. He is fishing now. Running around the mountains out east, texting me with questions, and finding the same love and passion I have for fly fishing that we once shared for football.