After reading about Andy Buckley in a previous edition of ESF, Kerry Jordan decided to head to Derbyshire for a couple of days' fishing with him

We pulled up and parallel parked  in the Boar’s Head car park at exactly the same time. I knew it was him and Andy knew it was me. We had not met before and our view of each other was through rain-  streaked side windows. This had happened previously with other guides - immediate recognition of a fellow fisherman with no specific visual clues.

I had come from Suffolk to Derbyshire to fish for grayling for a couple of days. I had caught them in the Tees and Slovenia but they remained unfamiliar compared to trout. I had read Andy's piece in issue 59 of ESF and had booked two days of guided fishing with him. After a brief introduction we were on our way to a stretch of the Dove. The outlook seemed poor; it was the third week of October, the daytime temperature had dropped 10 degrees Celsius over four or five days, and the wind was coming from the east.

I had brought my own tackle but left it in Andy's car as he had four rods ready rigged for French nymphing, dry fly, klink and dink, and indicator nymphing respectively. I had asked Andy for instruction on French nymphing and that was how we started in streamy runs over gravel, interspersed with fine skeins of bright green streamer weed. I was using a supple ten and a half foot nymphing rod supplied by Scierra who sponsor Andy, and he gently pointed out that the nymphs could be put into the head of the run by a gentle flick, rather than by an action akin to whipping a galley slave. His attention to detail was soon apparent; attached to the long mono leader was a micro swivel, itself fixed to a seven or eight inch piece of yellow backing line and a further similar piece of red backing acting as an indicator. Connecting this to the tippet was another micro swivel. The worth of the swivels was demonstrated by the complete absence of line twist over two days casting almost exclusively over the right shoulder. At the business end was typically a 2mm tungsten nymph on a short dropper attached to a tiny ring, and a heavy beaded tungsten nymph on the point. The nymphs would generally sport a pink bead and Andy would frequently check the points or change to a different weight of nymph to match the flow and ensure the point nymph was tickling the bottom. He dresses his nymphs lightly and some incorporate lead wire as well as a tungsten bead.

I was catching grayling now from each pool we fished thanks to my guide’s knowledge of their holding stations and little pointers to improving presentation - for example where necessary thrusting the rod tip forward to ensure that the nymphs were tracking downstream rather than slightly across, and adjusting my stance. 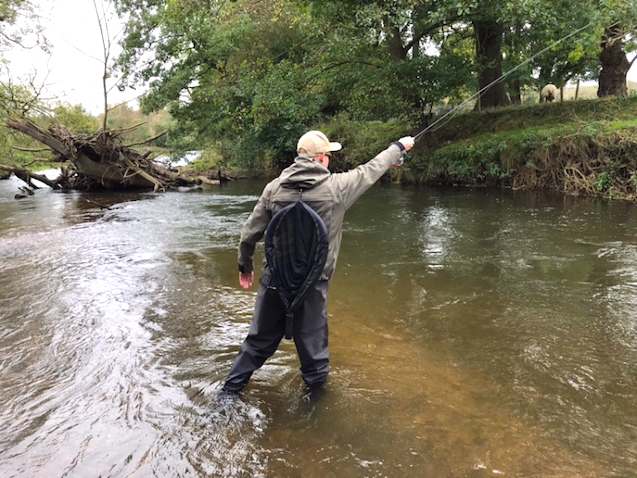 A short spell of dry fly work followed with little happening mirrored by the lack of any discernible hatch. To his credit Andy kept a straight face while observing what I call “casting”. I don't know what he would call it….

Next up a lunch break - panfried steak and salad  followed by a chocolate profiterole, and Kelly kettle doing the honours with the coffee. Not too shabby! 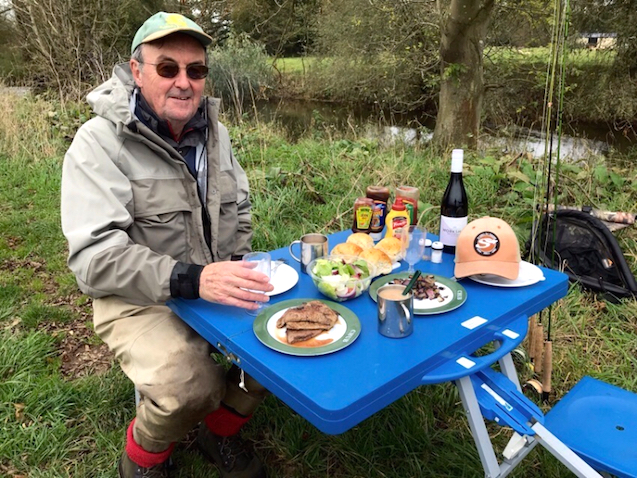 The afternoon started with klink and dink in an even paced straight section - unremarkable to look at but Andy knew where the fish were! He was ringing the changes with differently weighted nymphs. I assumed that this was to get the business end near the deck rather than to challenge my sublime casting! Whatever, a number of grayling, an unseasonal wild brownie, and a burly rainbow testified to the success of his tactics.

An upstream move to the top of the beat by a solid old red sandstone bridge gave rise to a fresh tactic. Please look away now if you are of a sensitive disposition……yes, an Armageddon nymph on point under a plastic sphere that I assumed had come from a plumbers’ merchant. We were indicator nymphing and I felt guilty, as though I was dealing crack cocaine in an orphanage. Andy showed me how to launch the mischief in a parabolic arc from a tight line downstream. We didn’t wait long before a grayling and a wild brownie came for a fix. Then as a small grayling was hooked a silver blue torpedo shot out after it. Wtf was that? I chucked the ballcock back in and hooked the hooligan straight away. A few minutes later after a muscular display Andy netted what was obviously a scarred veteran rainbow with a bluish metallic cast around three pounds. I gathered it was a rainbow variant known unsurprisingly as a blue trout, and stocked by another club for their fighting prowess(!). 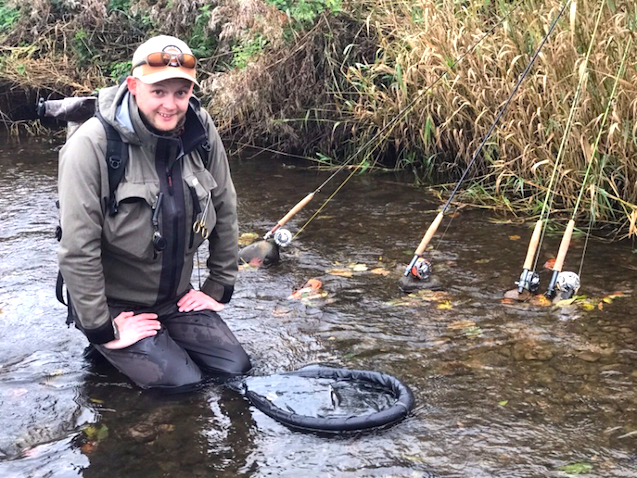 The light was fading so Andy dropped me off at the Boars Head a short drive away which I found clean warm and friendly with good food. Out for the count early!

The next day was wet and no warmer, and the atmospheric pressure had dropped off a cliff, and I knew it wouldn’t be easy. Andy remained upbeat and took me to a new part of the water for more French nymphing. My technique was improving and although fishing was dour I landed a very pretty wild brownie which needed some TLC from Andy prior to release, followed by a rainbow which fought long and hard and which had obviously been in the river for a while judging by its intact fins and sleek appearance. We moved downstream to the inside of a wide bend with fast water at our feet and the French leader method was soon rewarded with another rainbow, followed by three more. Each was deep chested and muscular with lots of swagger and attitude, like a night-club bouncer. Andy opined that they had probably pushed the grayling out as they had previously been prolific in that stretch. Why anyone feels the need to stock these fish in an historic river with who-knows-what effects on the  precious indigenous brownies and grayling is beyond my understanding. 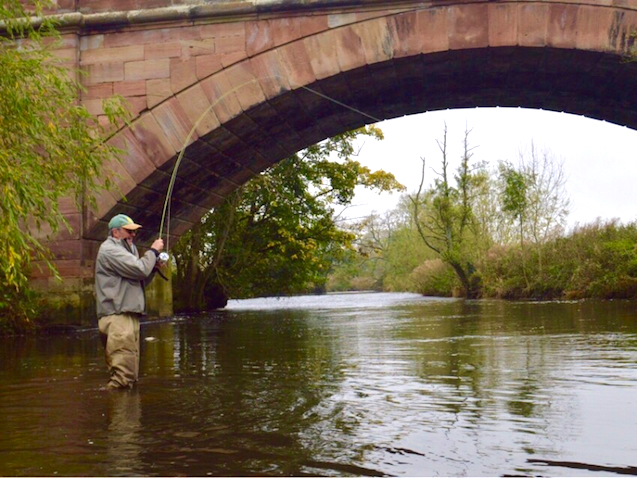 Despite persistent rain Andy prepared cheeseburgers and onions which we ate in the car. After lunch the fishing was dour with the weather closing in. We kept at it though and my last cast was rewarded with another pristine out-of-season brownie gently returned after a photo for Andy’s Dove trout database. Overall then around 30 fish on the first day and 12 on the second; no trophies but not bad considering the conditions and very largely down to Andy’s input. I enjoyed his company, benefited from his knowledge, and learned lots. For his part Andy worked hard, is a super fisherman and talented fly tyer. His guiding career is just taking off, but already I gather most of his work is repeat clients which is a good sign at this early stage. I wish him well.

Want a day out with Andy? Visit his website below